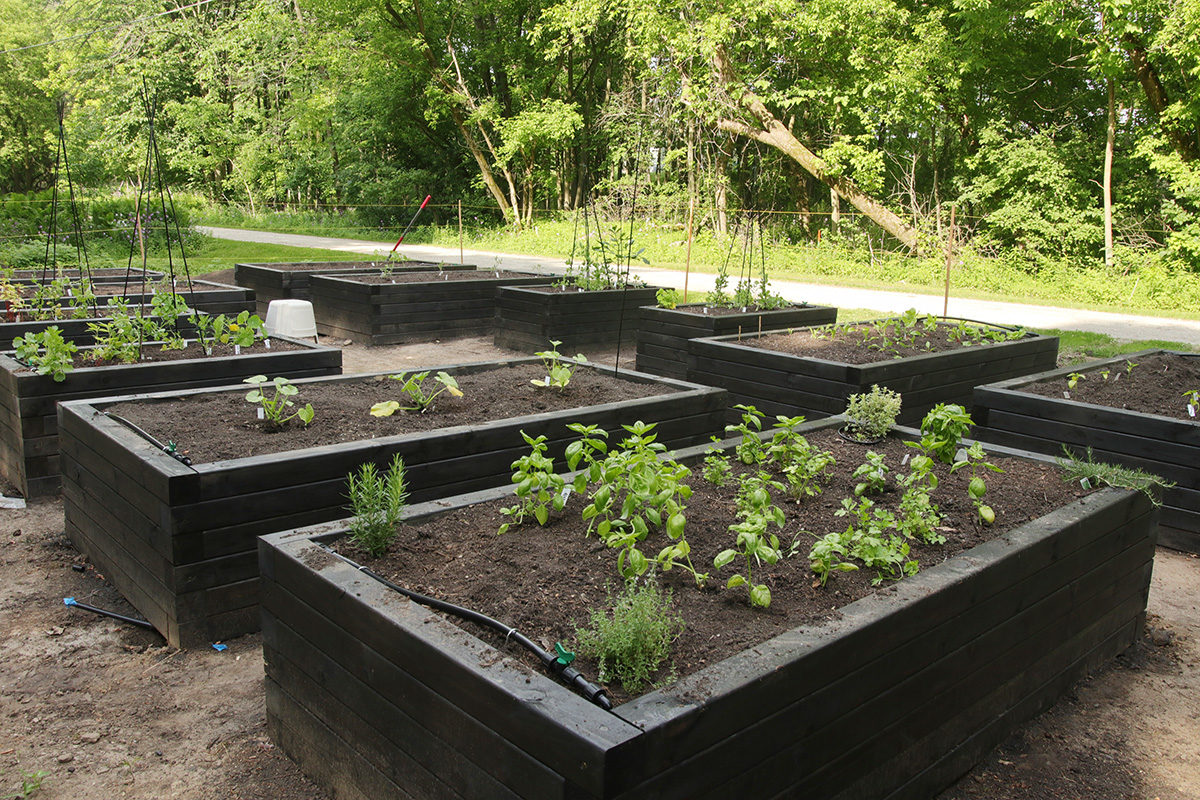 If you build it, they will come.

Apparently this holds just as true for vegetable gardens as it does for magical baseball diamonds, because they’re coming. “They” would be the neighbors, who have taken a real interest in this massive project we’ve had going for a couple months now. It would be hard for them to miss it as they all drive right past it and since we’re a friendly neighborhood, we’ve had a chance to chat with nearly every neighbor lately. We’ve had lots of encouragement (it’s nice when the neighbors tell you that it’s looking good), and even more questions. And the top two have been: 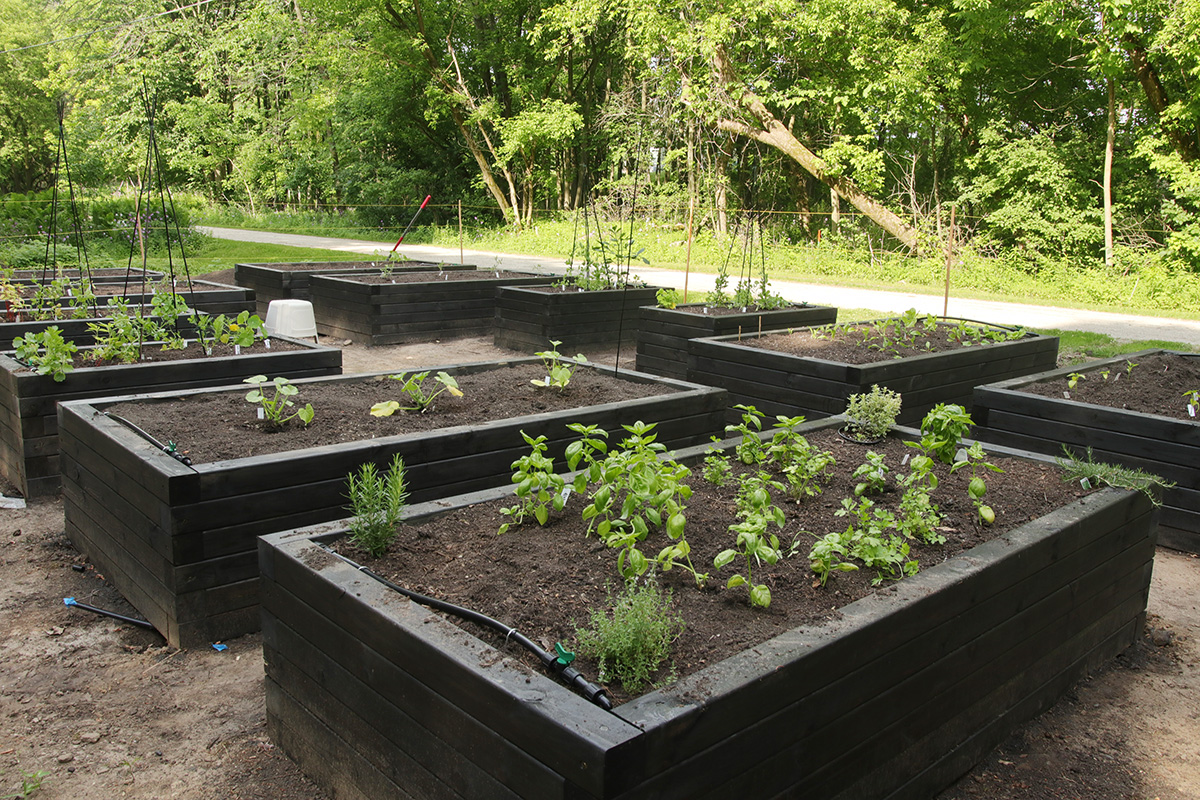 When I was working on the staining and sealing last weekend I’d say the neighbors were downright panicked about the planting situation.

And here’s my answer: Of course I’m planting this year; I have absolutely nothing to lose. 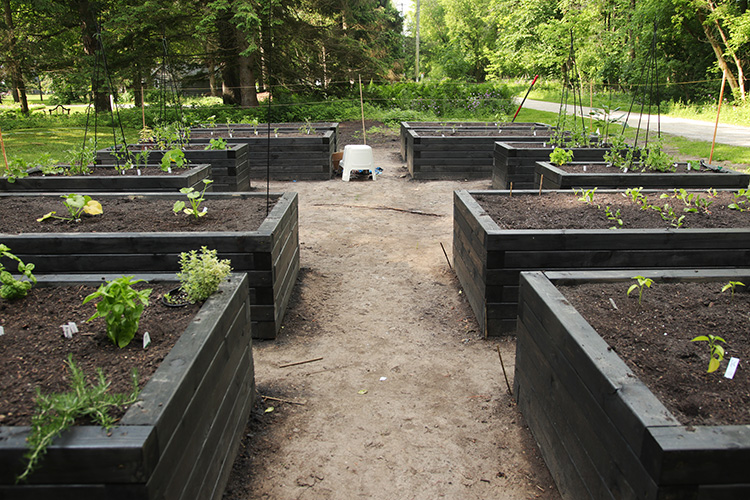 Ignore the stool in the middle of the garden; it’s a leftover from when we building the beds.

To be honest, it really isn’t all that late to be planting. Around here, things like tomatoes generally don’t go in the ground until the first week of June. I have, of course, missed the window to plant peas and onions, but I’m forging ahead with everything else I would have planted normally.

And I’m happy to report that everything is now in the ground. Fourteen tomatoes, six cucumbers, two zucchinis, one delicata squash, half a bed of potatoes (late but worth a try), six peppers, beets, Swiss chard and lettuce all started earlier in cells, oodles of parsley, basil and other herbs, lots of annual flowers for the cutting beds, and rows of lettuce, cilantro, arugula (a stretch for this time of year to be sure), kale, and beans with room for additional sowings to come. It was an absolute joy to potter around my long-awaited garden, even if I wasn’t able to savor the moment quite as much as I had envisioned. 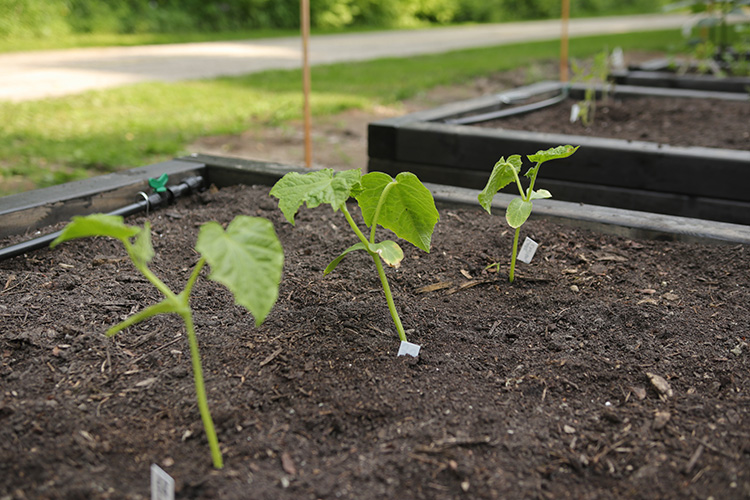 Cucumbers waiting for a trellis.

The tomatoes—all but one grown from seed—look positively pathetic. Something happened to my tomatoes this year. All was well until I transplanted them. I couldn’t find a garden center with decent potting mix so I bought a brand I’d never used before (and will never use again). From there nothing grew. Of course it could have been something else, but I’ve never had veggies I’ve grown from seed turn out so pathetic before. The good news is that a couple weeks ago I transplanted to spindly tomatoes to the container outside the back door and both have thickened up, greened up and seem to have caught up to where they should be, so I have hopes that the rest of the tomatoes will do the same.  It was nice to have room to spread them out properly. I’ve been jamming way too many in a small area for several years now. 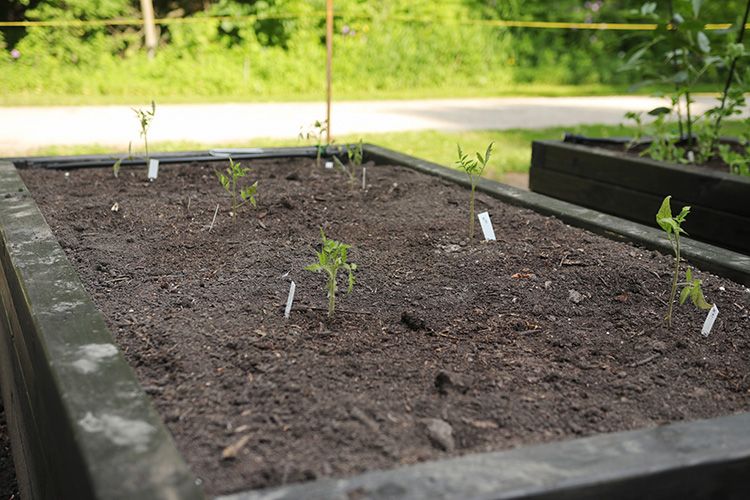 I also staggered the beds so that I’ll be able to move everything one bed over every year and not have two crops in the nightshade family (tomatoes, peppers, potatoes) growing in the same bed in two successive years. Rotating my veggies is a luxury I’ve not had before. 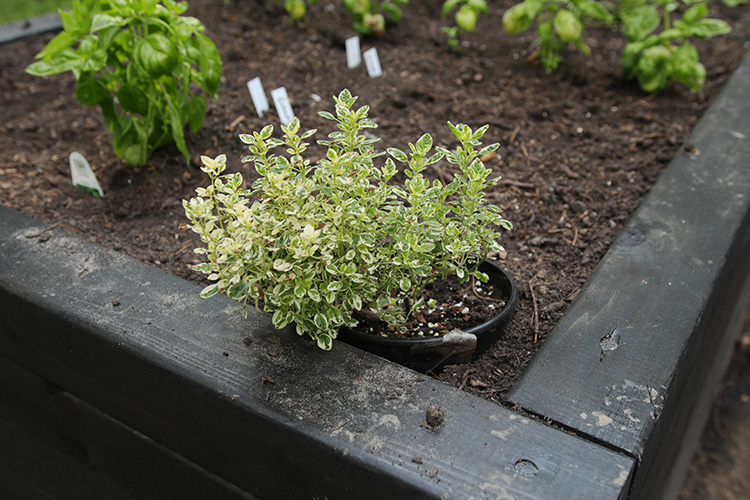 I’m growing the variegated oregano in a pot sunk in the soil so it doesn’t run all over the place.

In the flower beds, I’ve crammed way too much, which is basically my mantra for life. Each bed is focused on a single color: pink, orange, blue/purple and white. Each has sweet peas in the center and then annuals either started from seed or directly sown in the beds. My hope is for a beautiful cutting garden that also attracts lots of great pollinators to the garden. 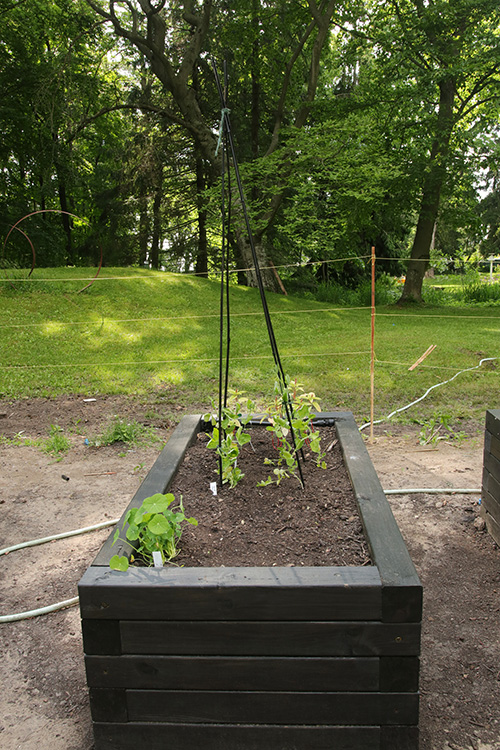 The small beds are for flowers, each planted with sweet peas in the center. 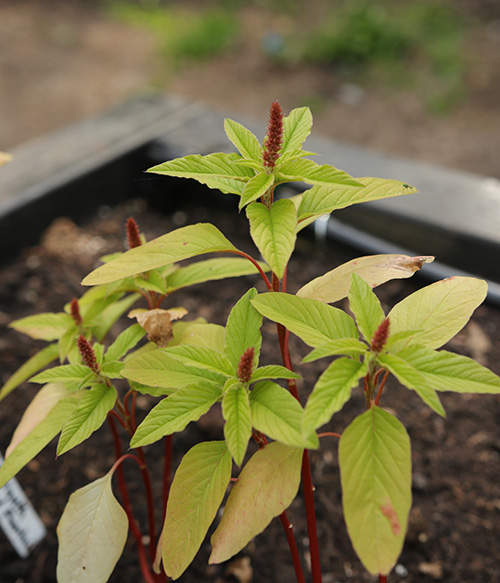 I’m growing amaranth because I love it in bouquets.

As I was working in the garden I was starting to get just a teeny bit annoyed that my neighbors had so little faith in me that I wouldn’t know when to plant or be able to grow anything. When I mentioned this to Mr. Much More Patient he admitted that their concern may have something to do with the fact that he told almost every neighbor who stopped by to chat while he was building the beds that there would be plenty of vegetables for the whole neighborhood. At least now I know why they were so concerned.

Want to catch up with how we got to this point? Here are all the posts: 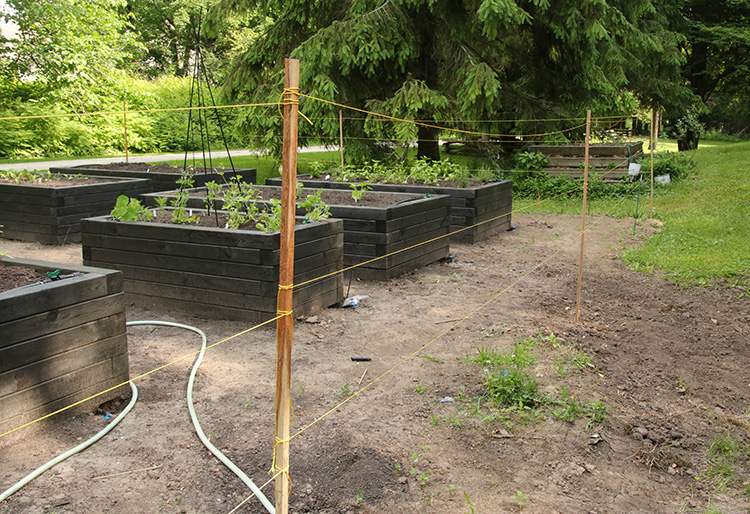 Since the real fence can’t be constructed until all of the irrigation and gravel is completed, a temporary fence—string between posts—will have to suffice to keep the deer at bay.