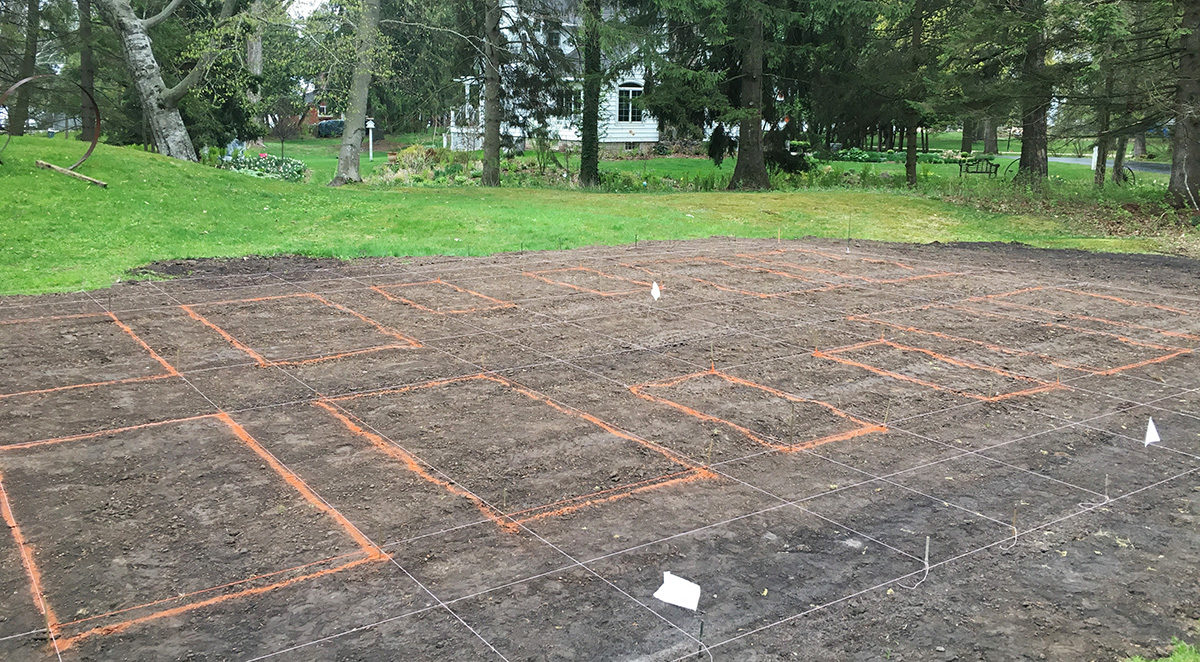 I think it’s safe to say I may have underestimated how time intensive the process of building the new raised bed vegetable garden would be. I can say this with some authority since we are now into June and nary a vegetable has been planted at my house. Still, I’m not interested in rushing this process for the sake of time because I’m hoping to do this just once and do it right. Plus, at this point everything is late. Being a little later isn’t going to make that big of a difference.

The first step in the process is also the least satisfying. We had get the entire garden area leveled. Since there was about a two-foot difference with several undulations in between, we opted to have a professional do this. They used the soil from the old raised beds along with another 15 yards or so of topsoil to level everything out. 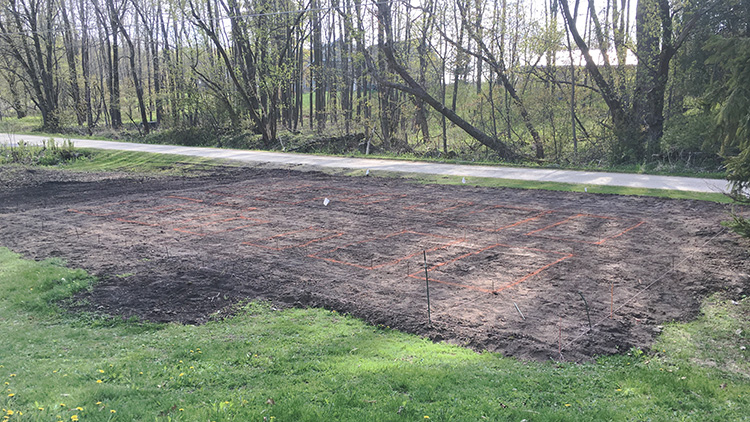 With the area leveled, we had to lay out all the beds. Since this is a very symmetrical design, I knew that if we were off, I would notice (even if no one else would) and it would slowly drive me insane. Fortunately my husband also knew this and he prefers me to be in the sanest state possible (it’s a sliding scale). So we spent a great deal of time with a long tape measure and anything we could use as a stake walking back and forth measuring everything. At some point I decided that the garden should parallel the road, even if the road is slightly angled to the property line. Because this garden is close to the road, I thought it would look odd if it wasn’t parallel.

I’ll admit right here that I’m not great at math (a fact that will come into play in my next garden update), but the best tip I have when you’re trying to lay out rectangles is to measure opposite corners and then the other opposite corners. When the two measurements are the same, you’re square. It’s just a good last check before you make something final. 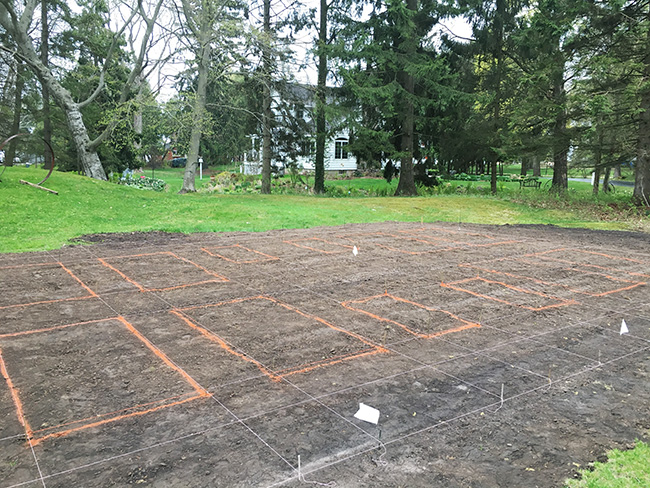 We used string (the kind you use to tie bakery boxes shut, not the kind that any kind of construction professional would ever use, because that’s what we had) to lay out a grid so we made sure that the edges of all the future garden beds were lined up. All of this had the effect of feeling like you were in the midst of a massive jewelry heist in the Smithsonian as you tiptoed through a matrix of laser beams. It also had the effect of making you very crabby when you continually tripped on those damn strings for the next two weeks. 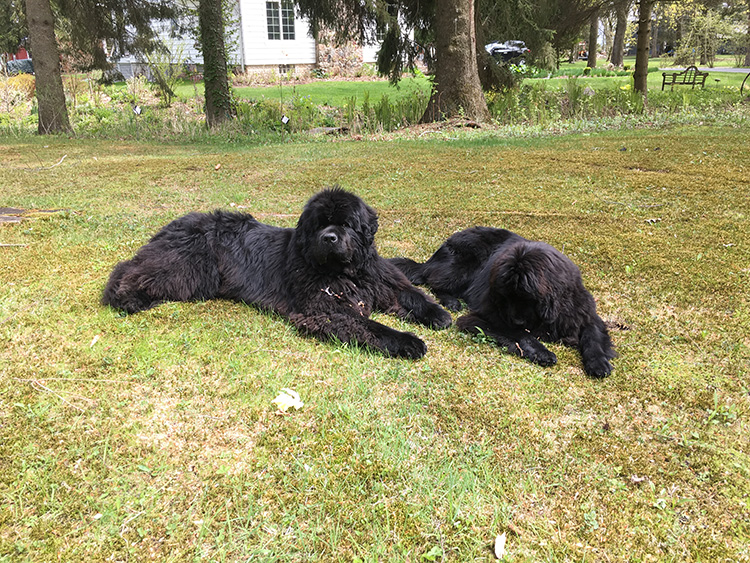 Odin and Dorothy thought this entire process was unncecessary and spent a lot of time supervising. 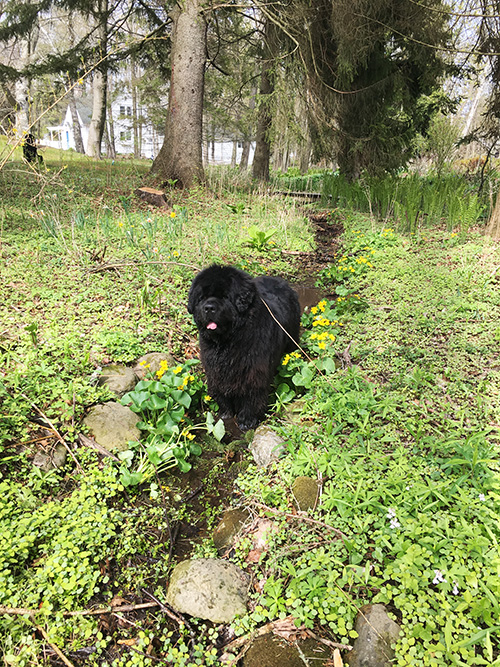 Until they got bored and then they made their own fun, which in Odin’s case involved a very muddy walk down the creek.

Because we knew there was a chance (yes, a 100% chance) that the string would stretch and sag, we also marked all the beds with spray paint and stakes (bamboo poles cut into pieces) so we wouldn’t lose all our hard work.

It was an onerous task, but one that probably saved us time down the line. It’s certainly one that made me rest easier when we got to the next step in the process. 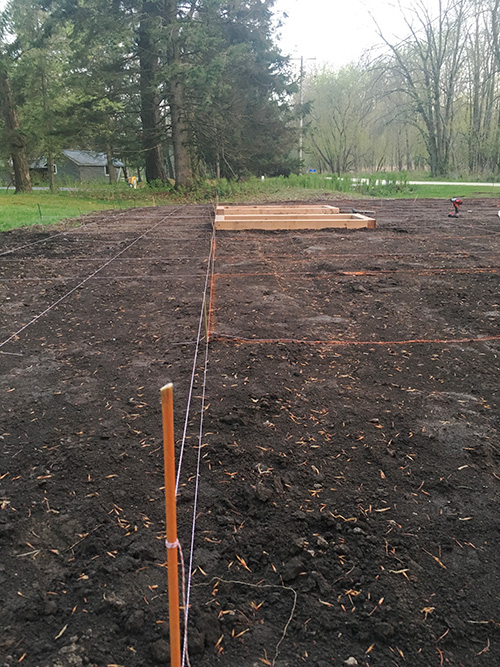 Here’s a sneak peek of the next step. That bakery twine really came in handy.

Because this is not a typical garden—I have a tendency to make everything more complicated (feel free to read that as expensive) than it needs to be—I thought it would be helpful in these posts to point out ways that I could have done it simpler or less expensively. So here’s that part:

Really none of this part of the process has to be done. There’s no reason you have to level an entire garden, but you do need to level each individual bed, so some degree of sitewide leveling is probably necessary. But you wouldn’t have to hire someone. A bit of know-how and some rental equipment could take care of this without much fuss.

As for creating a grid to make sure that every bed is in precisely the right spot, well, obviously that’s a bit over the top. In fact several people mentioned on Instagram that they never would have bothered with such a thing. Sometimes eyeballing it works fine, and if it gets your tomatoes in the ground before July, it’s probably a really good idea.

Here are some more posts on the new vegetable garden: