At one point during “Five Seasons: The Gardens of Piet Oudolf,” a new documentary on perhaps the world’s most famous living garden designer, the tall Dutchman is driving a Texas-sized Cadillac Escalade down a back road in Texas and he’s paying almost no attention to the road. He is captivated by the natural landscape, a painting of blue bonnets, grasses and orange flowers that you can’t identify at 50 mph.

This idea of this imposing figure—both in physicality and reputation—in garden design bombing through Texas (incidentally, he’s not a fan of Texas-style barbecue) in a giant SUV was both amusing and slightly frightening. But it was also illuminating. Oudolf has now designed some of the most important public and private gardens in the world in his distinct natural style, but he continues to seek inspiration in all places, even the roadsides of Texas.

And that’s really at the heart of “Five Seasons”: Oudolf’s continual search for beauty and inspiration. Although we’re not told how many gardens Oudolf has designed, and we get a glimpse at some of the most famous. There’s also very little mention of his background beyond a few mentions of his family, including his wife Anja, and the fact that she supported him as he tried out a variety of careers before finally landing on plants.

“I always had the idea that I wanted to create, but I didn’t know what,” Oudolf says. “I always had a strong feeling that I could do something different; different from what I knew. I think that was solved when I met plants.” 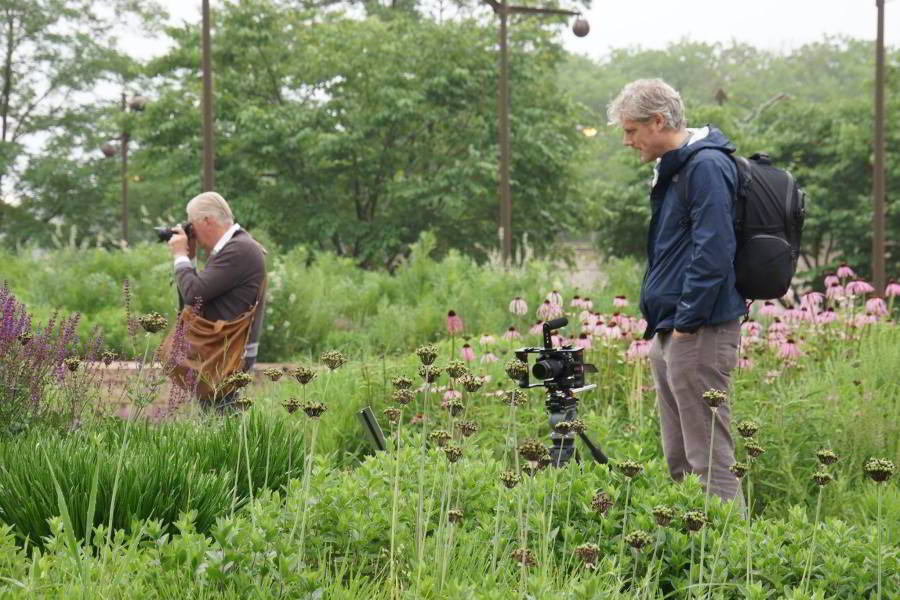 Filmmaker Thomas Piper does viewers a great service by skipping the minute details of Oudolf’s rise to garden design fame. The movie, after all, is about the man’s gardens, not the man himself.

But of course it’s difficult to separate the two when the gardens we in the U.S. know Oudolf for most—Chicago’s Lurie Garden and New York’s High Line—are so quinnessentially his style. Some of the most interesting moments in the movie come in a scene with Roy Diblik, Wisconsin garden designer and frequent Oudolf collaborator, as the pair revisit the Schulenberg prairie in Lisle, Illinois, that Diblik first brought Oudolf to in 2002. The Dutchman reminices about the first time he laid his eyes on Baptisia growing in its natural habitat.

“Seeing this and trying to invoke this feeling, that’s what it is,” Oudolf says. “That is my whole life.” 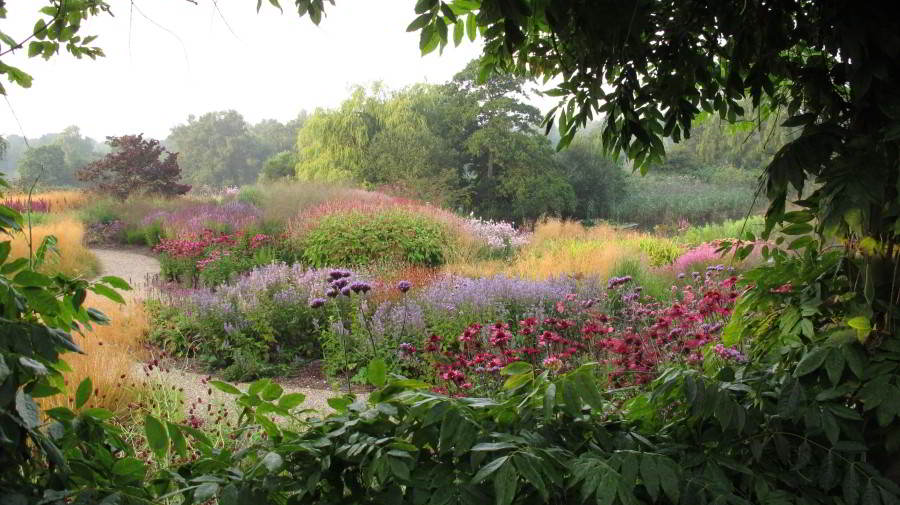 We also see Oudolf’s design process come to life as he creates the gardens for Durslade Farm in England throughout the course of the film. The concept begins as a rough sketch, then a detailed, colorful drawing, with an intricate series of symbols for the various plants he plants to use in astonishing numbers—57,000—then shows the process of plants being laid out according to the design and finally with Oudolf adjusting the plants before planting to make up for what can’t be predicted on paper. At the end of the first season in that garden drone footage shows what it looks like planted and growing, and it truly looks like Oudolf’s paper sketch. It is as though he sees in another dimension when creating a garden.

I’m trying not to wax too poetic about Oudolf, who refuses the urgings of a gardener at Durslade to do some planting while he’s there, admonishing that he spent a lot of time with dirty hands when he was young so he doesn’t have to have them now, not because it’s not deserved, but because it was my one annoyance with the film. Rather than have people talk to the camera about Oudolf, everything is shot in a series of conversations with him. Sometimes, as with Diblik and the Lurie’s Jennifer Davit, these come naturally, as though the camera isn’t there. But in other cases the conversations turn into piling praise onto Oudolf with all the subtly of a 14-year-old fangirl meeting her pop singer crush, and the whole experience is bit uncomfortable. 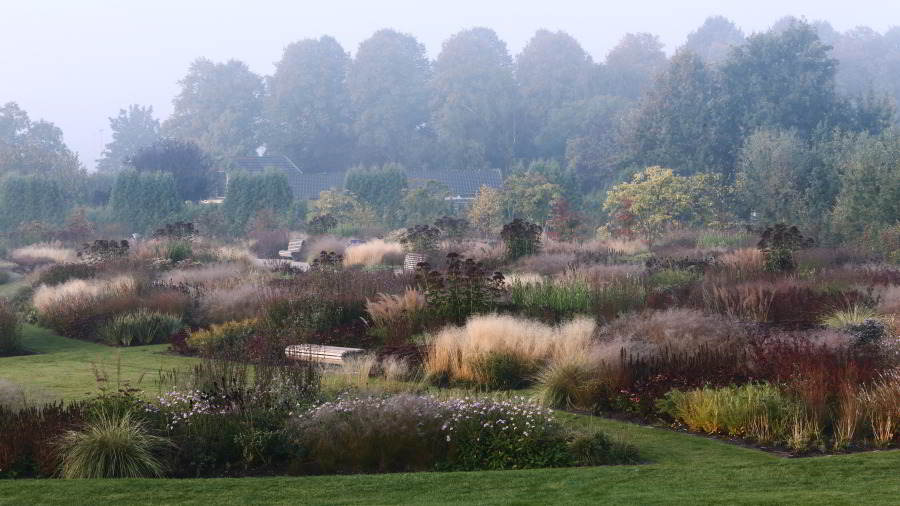 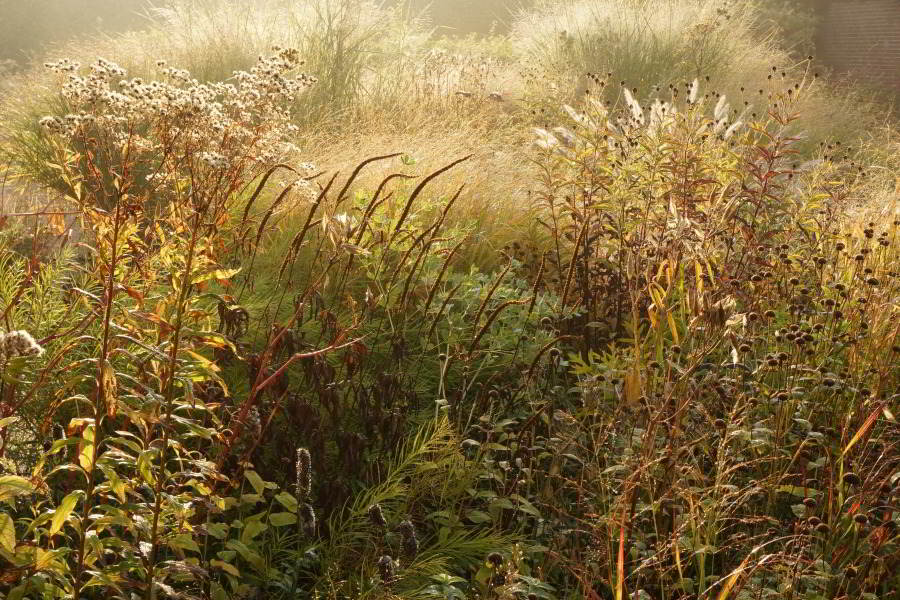 Fortunately such scenes are short and interspersed between moments of Oudolf’s gardens at all stages of their lives. Anyone who has been paying attention to Oudolf’s philosophy knows that the idea is to appreciate plants when they are decaying as much as when they are at their frothiest and most floriforous, and there is significant time spent allowing viewers to appreciate this beauty.

And that’s what is so captivating about “Five Seasons.” Regardless of whether you are a fan of Oudolf’s style of gardening, there is amazing beauty in it and in its creation; beauty that you may not see unless you stop for a moment to really look for it. Piper’s film does the looking for us, all we have to do is take it in.

“Five Seasons: The Gardens of Piet Oudolf” opens in New York on June 13 and in Los Angeles and San Francisco on June 29. A list of screenings can be found here.