As I got farther and farther behind in planting my vegetable garden I knew this day would come. In fact, it comes every year, but I knew it would be even more dramatic this year, as tomatoes just wouldn’t have enough time to produce and ripen all the fruit they were meant to  provide.

But here we are: If the average first frost date is an indication, there will be frost at my house (southeastern Wisconsin, zone 5b) in about two weeks. Frankly, it’s been so chilly over the last week that it seems like it might be much closer. And of course just a few years ago we didn’t get a killing frost until November 19. So no one knows for sure, but what is clear is that the days of ripening fruit on  plants in the vegetable garden are numbered.

So it is after much soul-searching that I have to do one of the more unpleasant tasks in the garden: It’s time to cut my tomato losses.

Gardeners, as I’ve said before, are natural optimists. It’s why we continue planting every year even after the garden has been decimated by insects or not watered properly or been less than we hoped it would be. So it’s natural to think that all the flowers that are on the tomato plants now will become delicious tomatoes.

It’s slap in the face time, folks: They won’t. In fact those small green tomatoes won’t become delicious tomatoes either. But there is hope for the otherwise grown tomatoes on the vines that are just waiting (perhaps too patiently) to ripen. And it’s time to give them a helping hand.

This is done by first stopping the production of any new tomatoes by cutting off the plant above the last branch with fruit on it. This is commonly called “topping” your tomatoes and I will warn you that it goes against everything you’ve been working for all summer.

Next you need to expose the tomatoes that are grown but still green to as much light as possible. I do this by pruning out almost all the leafing branches. I leave a few leaves here and there when they are healthy and hard to get to, but the plants just don’t need those leaves anymore. At this point they have one job: Ripen the fruit that is there. 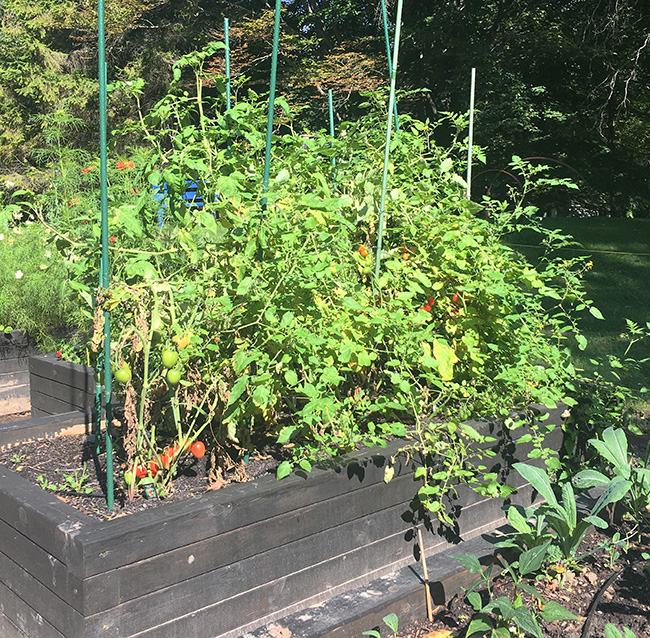 Here’s what one of my beds of tomatoes before most of the pruning (a few had been topped at this point). Thinning them out will help ripen the tomatoes that are already on the vines. 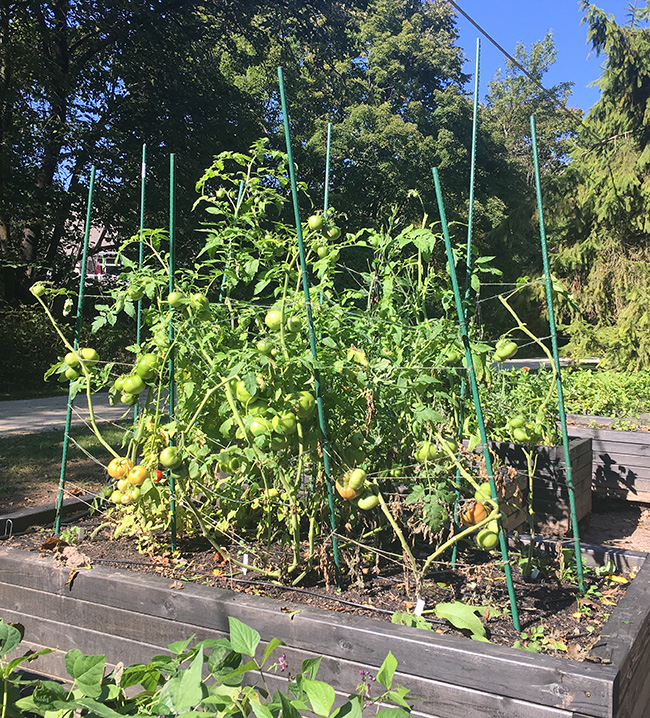 One bed of tomatoes after pruning, significantly diminished in size after a serious lopping.

And the last step in this save-what-you-can approach to the end of the tomato season is to give up on the idea of a vine-ripened tomato. That’s a luxury that gardens with impending frost are no longer allowed. As soon as the tomatoes start changing color, bring them in to ripen on the windowsill or the counter.

Ripen tomatoes inside when it gets late in the season. I pick them when they just start turning color on the vine. You can see a couple of these in the lower left corner of the second photo above, just barely turning from green.

For a gardener like me who loves summer to a degree I cannot adequately express, this season-ending ritual is hard to stomach. It’s admitting that there is no longer hope of an extended summer that lingers well past what any calendar suggests and an acknowledgement that we’ve hit that phase in the gardening year when we’ve done what we can and there’s always next year.

But it’s time to buck up, grab the pruners, do a superwoman pose to work up the courage to clip with reckless abandon and make the most of the tomatoes that are still salvageable. Beyond that, all we have is recipes for fried green tomatoes and green tomato chutney. I’ll take suggestions for both, by the way. I’m going to need them.

fall pruning tomatoes
by Erin @ The Impatient Gardener
9 Comments
previous post: Taking drastic measures to save a special plant
next post: Fall cleanup with a healthy dose of cozy