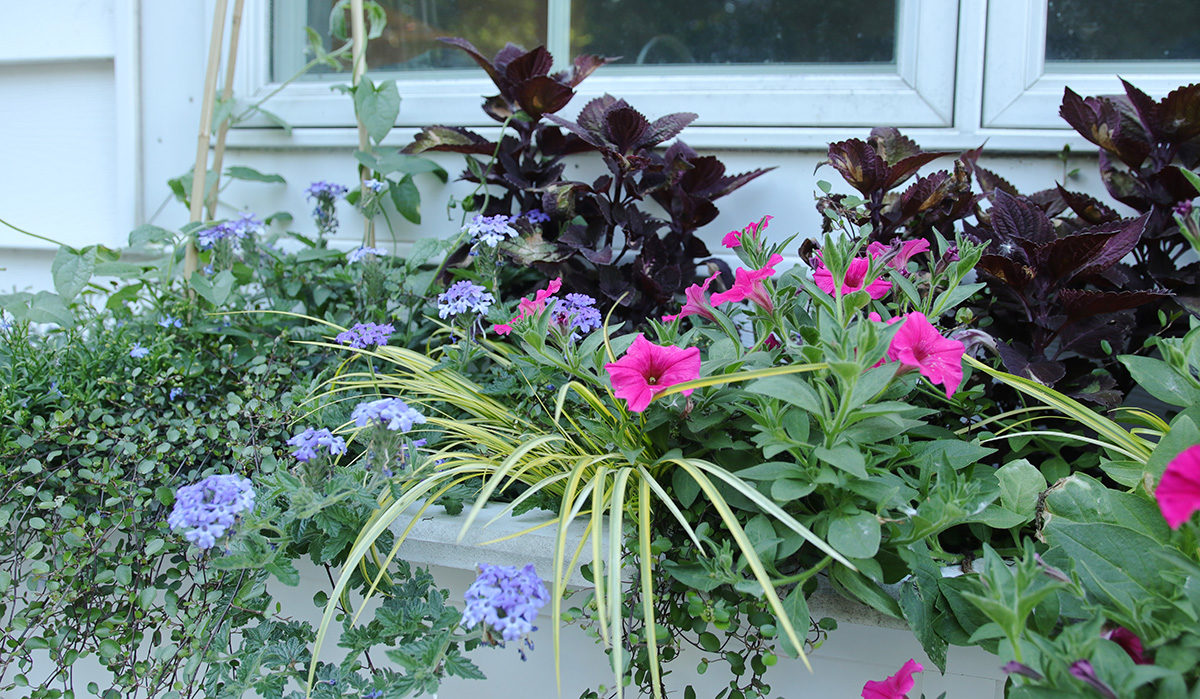 I waited a bit to show you what I did for containers at my house this year, partly because other gardening projects have been stealing attention, but also because all containers look a little better when they have chance to grow in just a bit. They are all now getting to the point where you can get a real idea of what they will look like in a couple weeks, when everything is at its peak.

It strikes me that I plant many fewer containers than used to, but I probably use more plants because I’ve gone to bigger and bigger containers. They are so much easier to maintain and so much more fun to plant up.

Here’s what I did. As usual, I’ll be sure to post updates on how they look as they grow as the season goes on.

After years using mandevilla as the climbing feature in these pots, a pair that flanks the posts for the deck pergola, I wanted to try something different. Ideally something that will grow a bit more and actually make to to the pergola by the end of summer. I had a bit of love affair with Thunbergia this year and grew three different varieties of the vine from seed—White, Blushing Susie and Sunrise Surprise. It was the first time I’ve grown them and what I learned is that I should have started them much earlier and left them inside longer. They did not appreciate cool nighttime temperatures in the mini greenhouse. I used Blushing Susie for these planters and then added in a mix of new plants, a favorite petunia that I didn’t want to be without this year (Supertunia Honey) and some seed-grown ageratum.

The Thunbergia have been slow to get going, but now that the weather has gotten warmer they are starting to go. I need to get the strings tied up to help them climb.

I’m posting photos of both planters, even though they are planted the same way. But you can see the difference in the color of Supertunia Honey between the two. The second gets a bit less sun and the flowers are a bit rosier than the more acidy yellow of the petunia in the sunnier spot. 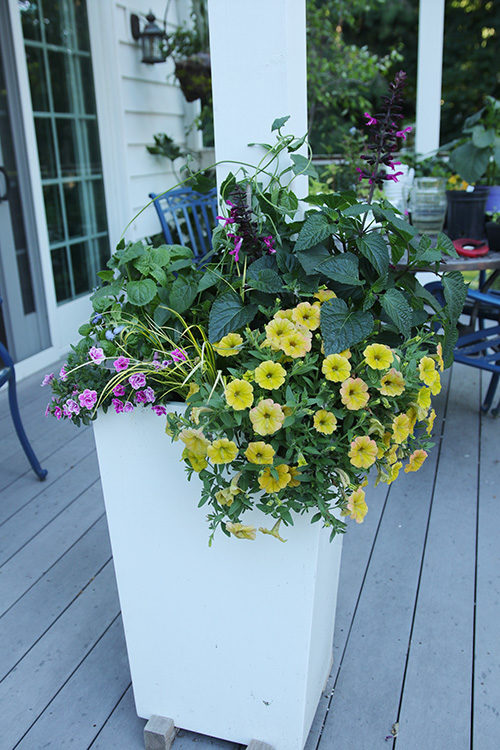 This container is in just a bit more sun than its partner (below). 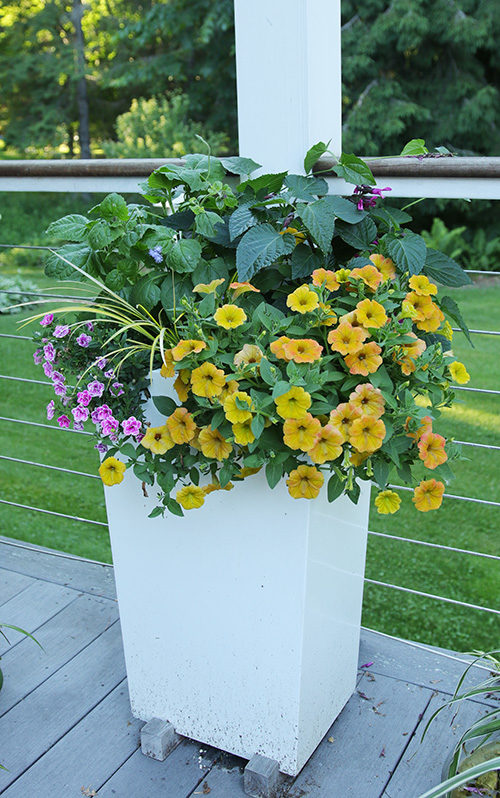 I’m also shockingly  taken with the new Superbells sent to me as a trial. Superbells Doublette Love Swept has delicate white edges and double flowers. It’s far too fluffy and delicate for my taste. Or so I thought. Turns out I’m quite taken with it. Although I often don’t love how Calibrachoa performs, this one is growing nicely so far.

I also love the annual Rockin’ Fuschia Salvia, also sent as a sample. After seeing the hummingbirds go nuts for the salvias at California Spring Trials, I’ve been thinking of ways to add them in more, and this one, with its dark calyx, is a real looker. It will get quite tall in this container, which I think is suitable for this spot. 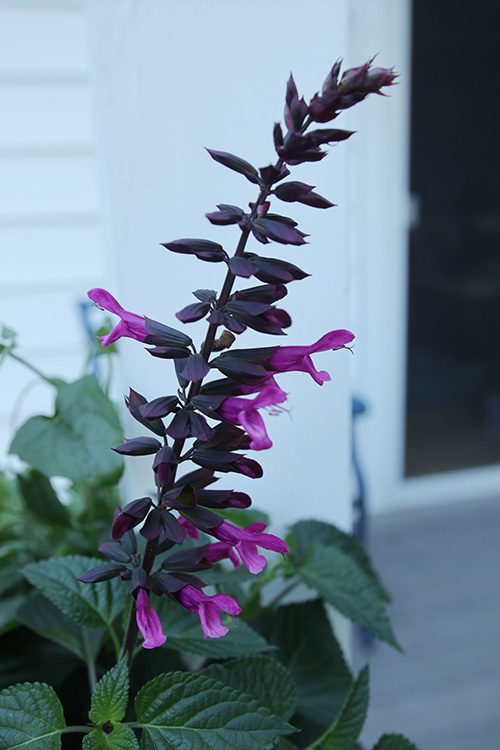 Here’s everything in the container: 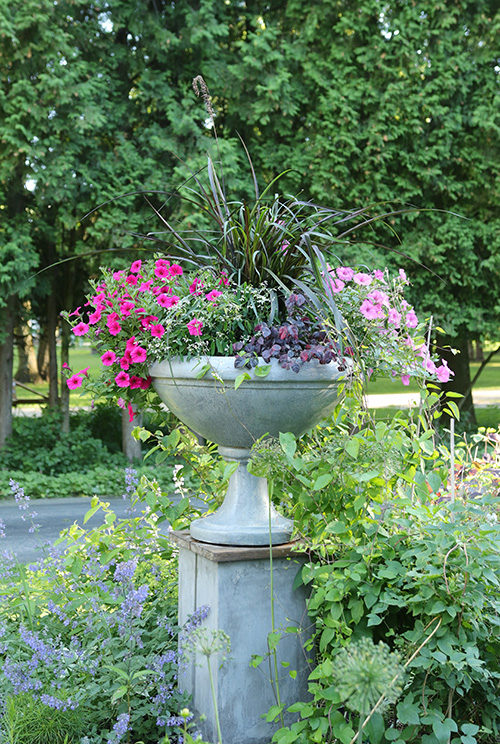 In May, when I first plunked this urn in the garden I expressed a little bit of doubt, but deep down I thought it would be OK. Well, my instincts were right, at least in this case, because it’s starting to look lovely. The perennials and shrubs have grown up around it and Clematis ‘Princess Diana’ is starting to try to climb around its base.

All of the plants in this planter are monsters. They can all grow quite big and will all be greedy for water and nutrients. There’s a good chance I’ll have to prune things back as we get into the season, but I’d rather have to deal with that than anything wimpy looking.

It has a definite purple and pink theme, thanks to the plant I started with: a variegated Loropetalum in the Jazz Hands line. It’s a zone 7 plant that Proven Winners sent as a trial and I thought it would be a perfect opportunity to try it in a mixed container. From there I went with the biggest growing petunias from the Supertunia Vista line and two new Euphorbias—Diamond Mountain—which grow up to 30 inches tall and wide. Think of Diamond Frost on steroids.

The Vertigo grass in the center is growing in a rather odd manner—more out than in—which is unique to this specific plant that I got (the last in the nursery), so I’ve gathered it up and tied it to stay more upright while it returns more to its natural habit.

Here’s everything in the container: 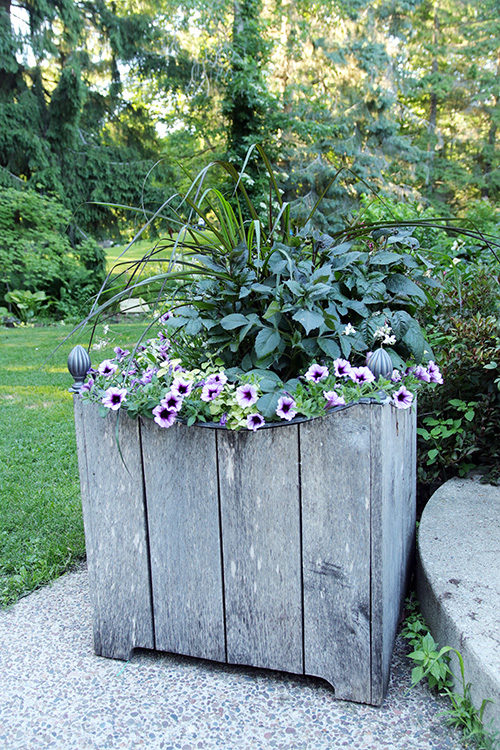 I was really torn on what to do in this container this year. Part of me wanted to put a big shrub in it and make really big statement. But then I recalled that last year I wished I had had a bit more continuity among the containers on the front of the house, so I decided to use another Vertigo grass—which has the potential to get quite large—to echo the one in the urn.

I made a video on planting this container. You can see it here.

Here’s what’s in this container: 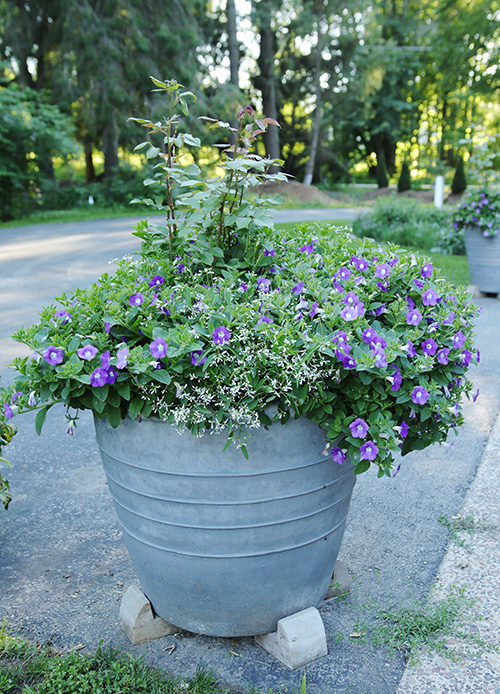 One of the two David Austin roses that I had planted in last year’s driveway containers didn’t make it through the winter. I know exactly what happened. I wasn’t great about getting out to the unheated garage to throw a little water on the potted shrubs in there and it just dried up. Instead of just replacing one, I decided to replace both with two new David Austin’s: ‘Desdemona’. Both are doing well, although one decided to grow a little sideways, which is upsetting my personal mental apple cart. It can be pruned in the future to stay more in the center of the container.

I went simple with these, just using a small Petunia—Supertunia Morning Glory Charm, which opens a deep blueish purple and fades to lavender leaving the appearance of three shades of blue on the plant—and Euphorbia. I did three of each in each container and they have absolutely gone haywire. It’s hard to even find the soil to stick my finger in to check the watering situation. 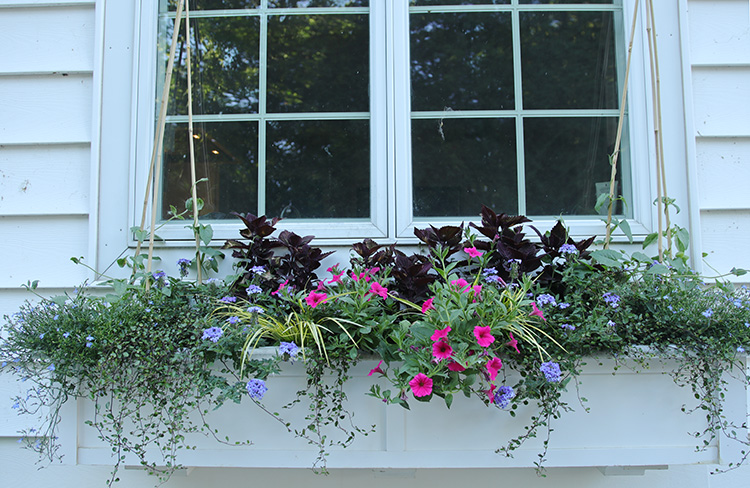 Longtime readers will know that the window box is my favorite container to plant each year, but also the one that stress about the most. Window box design is less forgiving than other designs. Unintentional asymmetry is immediately noticeable and if plant doesn’t perform as expected it can throw the whole design off.

I will admit that I often overplant my window box and this year I pulled back on the number of plants I used. So far I’m feeling good about that decision. It doesn’t feel sparse in any way and there’s still room for plants to grow there.

As with other containers, I started this year with Thunbergia grown from seed, in this case Sunrise Surprise. I’m aiming for some height at the sides of the box, where it won’t block the view from the window, versus a more typical design with most of the height in the center. I wanted to play off the dark eyes of the Thunbergia flowers, so I used a dark-leafed coleus along the back. 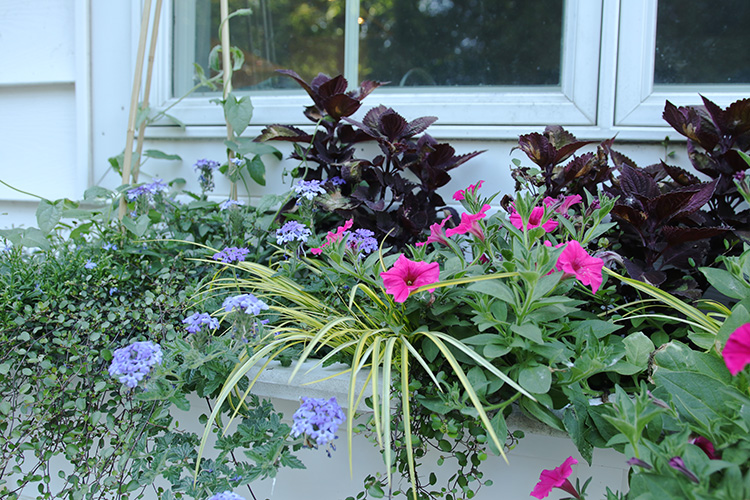 I also opted for one main trailing element rather than a lot of plants that will drip down the entire front. Supertunia Vista Paradise has a big role to play in the success of this window box so I hope it’s up for the task. I wanted to cool down the colors with some blue so I also used Superbena Royale Chambray and some blue Lobelia. For air and to soften the front edge of the box, I added creeping wire vine, which I’ve always disliked, but for some reason I was drawn to this year. I also added more ‘Ogon’ grass, the spiky texure of which really works by my eye.

This is a self-watering container and it’s the only way I’d be able to manage it. Right now I’m only watering about once a week, but as the plants grow and the days heat up, it will be more like every three days.

Here are all the plants: 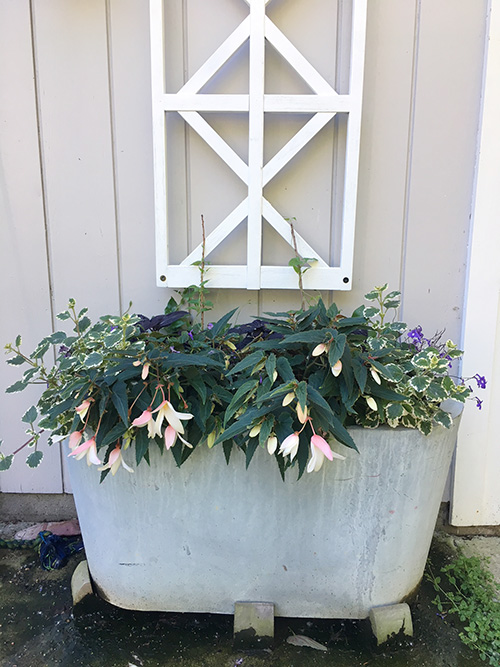 This is the third year I’ve had this planter and I did almost identical designs the first two years in a very subdued green and white color scheme. I still didn’t want a riot of color in this planter, but I wanted something different and a little bit bolder.

My great wish for this container is that be the home of a great vine that will reach the pergola  and flop over it a big, but this has been a bit of a struggle. Clematis, which I’ve tried the past couple years clearly hasn’t been happy. The fact is, there is far less sun here than I originally thought and I’ve had to adjust the planting to be more shade tolerant.

The white Thunbergia I’m attempting to grow up the new trellis will not be in its happiest place, but Thunbergia are generally extremely vigorous, so if the shade holds it back a little bit, it should still be enough for a good show. In any case it will be a good test to see what works here.

In front of that are more dark-leafed coleus, again to accent the eye of the vine’s flowers, a cracking begonia, some Stephonotis and variegated Plectranthus that will trail over the edge.

I’m looking forward to the coleus growing a bit more as right now this container is feeling a bit flat.

Here are all the plants in it:

You can see how I’ve planted these containers in previous years here:

If you’re looking for other container planting or growing advice, check out this article, this one and this one with tips on growing shrubs in containers.

How did your container plantings come together this year?

containers planters pots trough window box
by Erin @ The Impatient Gardener
15 Comments
previous post: How to bust some rust in minutes
next post: Friday Finds: Catching up with the garden