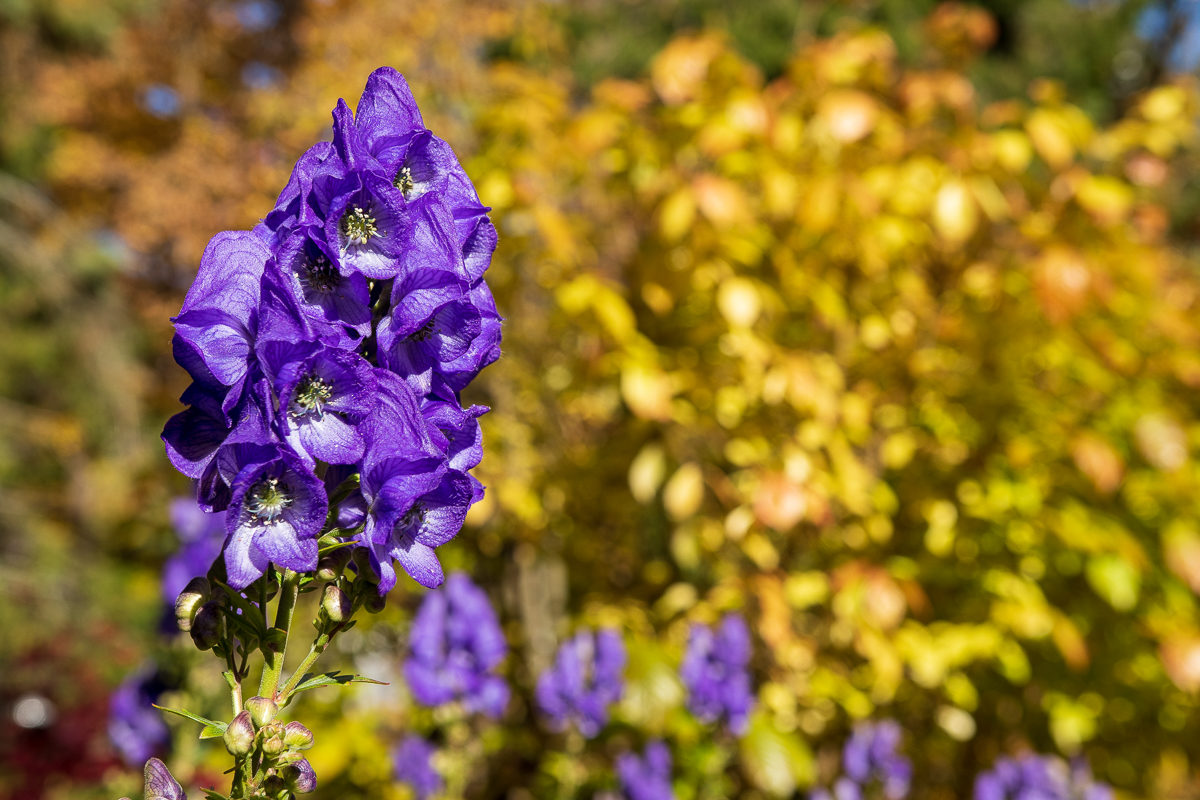 I might whine about winter and therefore autumn, which is guilty by association, but last weekend we had one of those magical fall days. The sun was bright and warm, the sky was that deep sapphire blue you only see in the last quarter of the year and every bit of foliage seemed to be doing its best to outshine the leaves next to it.

It was enough to make this fall-begrudging gardener admit that autumn maybe isn’t so bad after all. While I was cranking through some garden cleanup, I took note of how many plants looked beautiful dressed for fall that are not known for their fall color.

We expect vivid autumnal hues from trees like maples and in fact many people plant them for that reason alone. Acer japonicum ‘Acontifolium’ is the star of the entire yard this time of year. I’m so thankful I had the smarts to plant it in full view of the living room window. 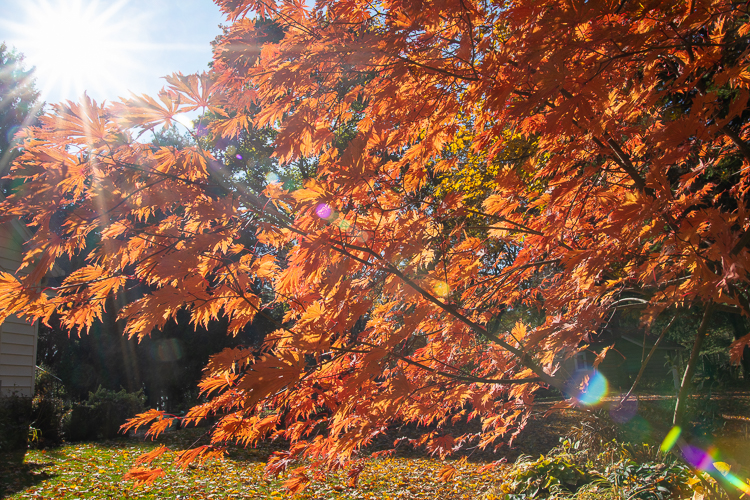 But that maple wouldn’t look nearly as good without its supporting cast. This beech tree is my favorite tree in our yard and its leaves are golden this year, pausing long enough to enjoy the color before they move on to the less appealing brown I usually see. 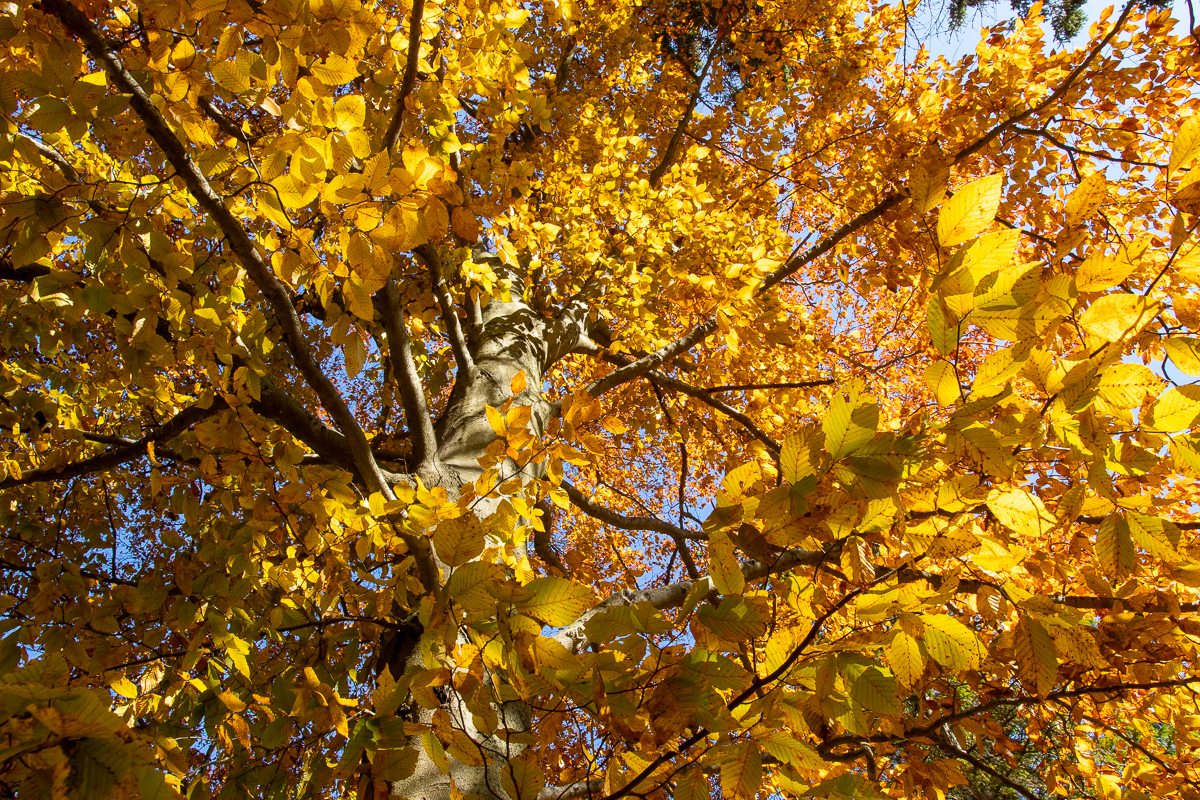 Speaking of golden, let’s just take a moment to talk about hostas. Why don’t people talk about the great fall color that some hostas develop? I think these are ‘Blue Angel’ hostas (they were some of the first plants I plunked in the ground here and I, of course, failed to label them). Yes, I know they will be mush soon, but all those beautiful tree leaves will be on the ground soon too. Nothing could compel me to cut these back early. 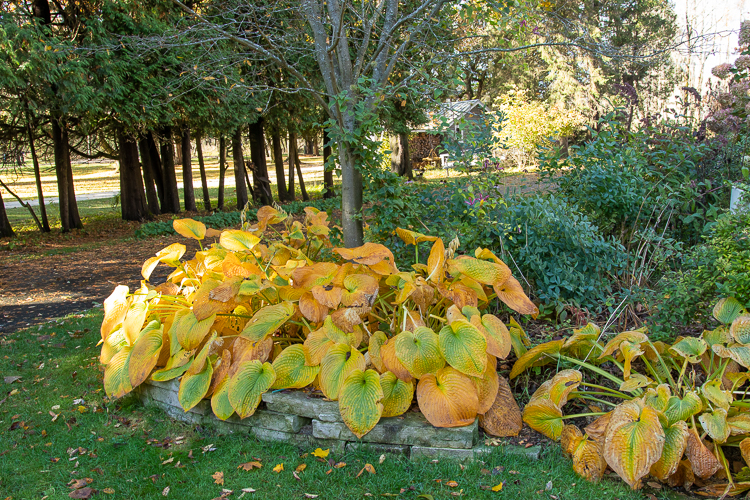 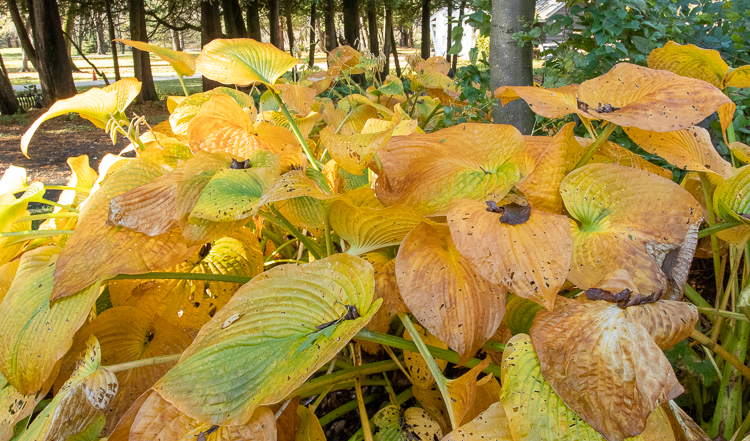 And then there is the fiery orange of Glow Girl birchleaf spirea (immortalized in this rather gushing post). It is positively unbeatable. 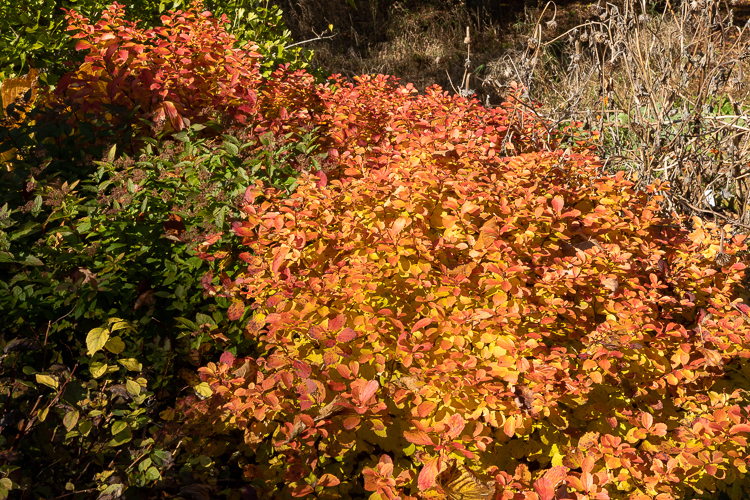 I’m not sure how to describe the deep maroon color of Viburnum plicatum ‘Mariesii’, but they line up like little soldiers on the branches, standing out against the gold hues of the woods behind them. 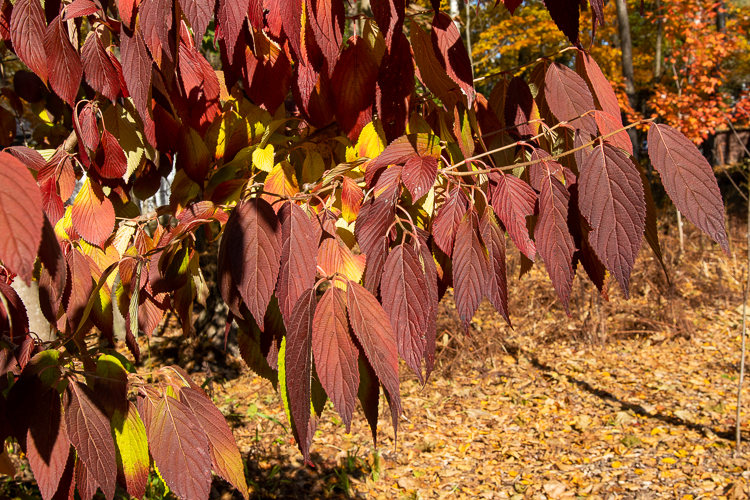 I guess I can admit that I’ll never remember the name of the shrub on the right, below. The name of it comes and goes for me (and I’m going to go back and edit this post as soon as it comes back), but its shiny leaves in a range of colors from faded lime to yellow with blushed tips is a great juxtaposition to the beautiful but deadly Aconitum aka monkshood beyond. 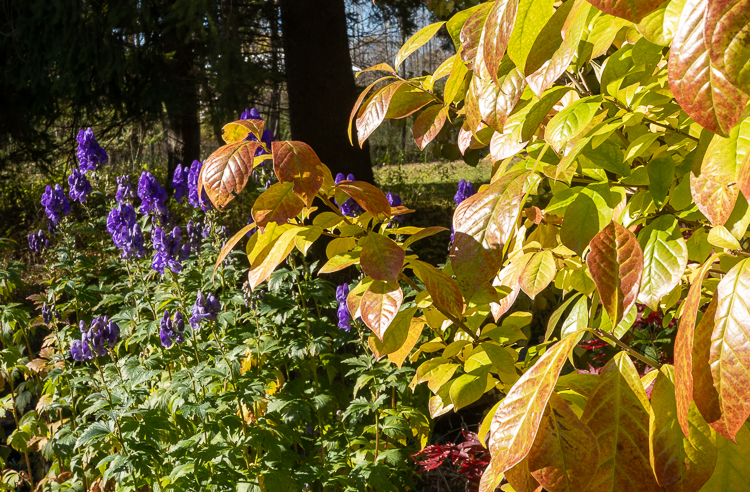 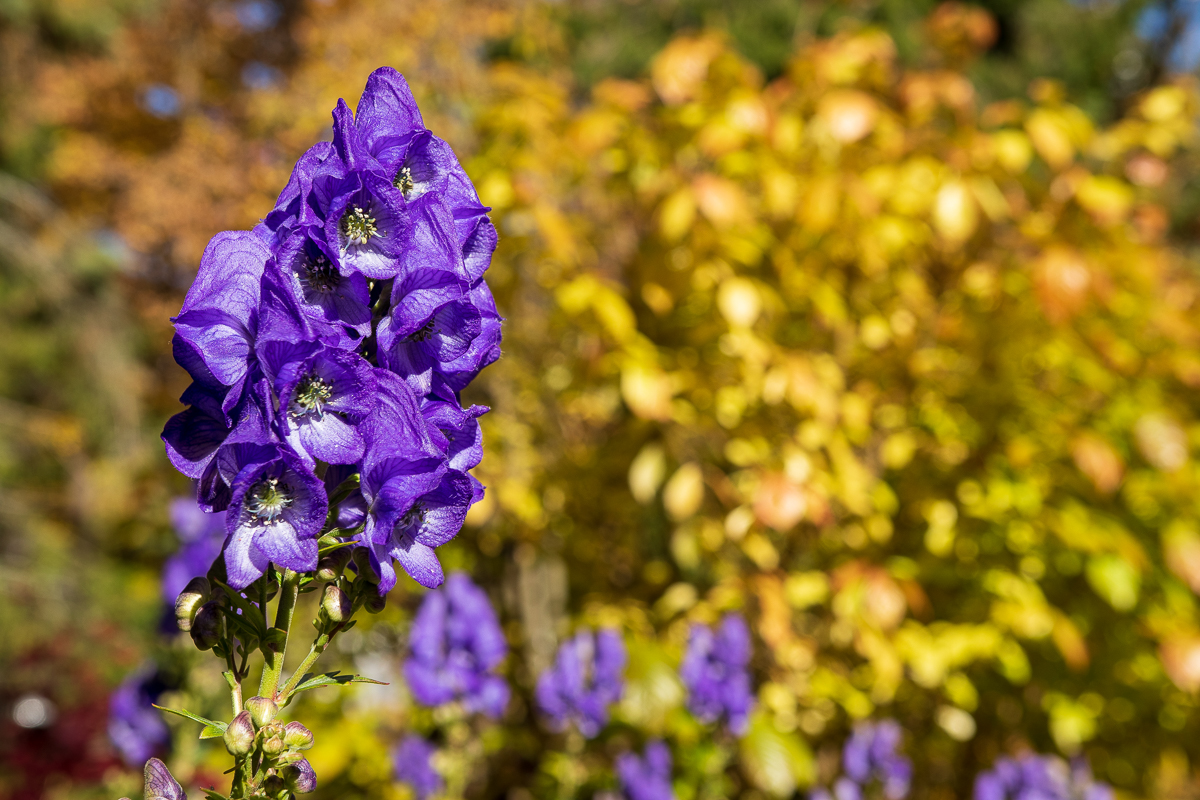 The monkshood wins my award for the most unusual fall color, but you can’t deny that the blueish-purple flowers were meant to be in the sea of sunny fall hues. The climbing hydrangea is turning bright yellow now and it really couldn’t be better.The Hydrangea petiolaris growing on the north side of the garage is much later to show show color than this one, which receives much more sun at this time of year. 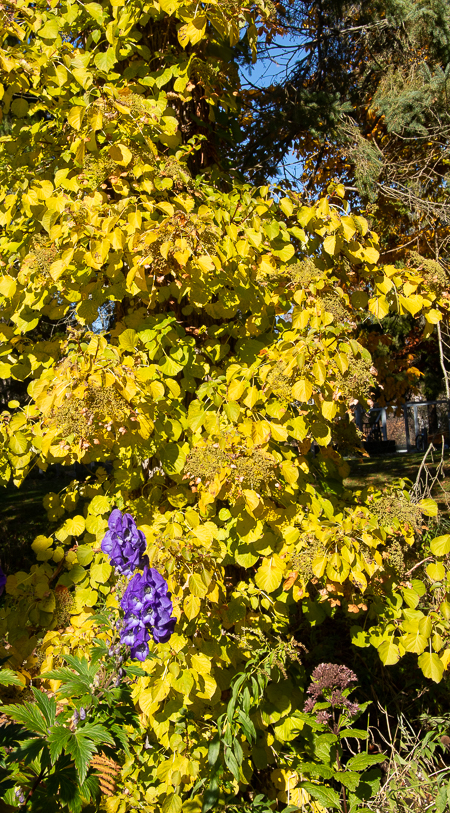 The most unexpected fall color I found over the weekend was this bouquet of beautiful dahlias, some of which were still going strong at the end of October, an unusual occurrence that made me love that beautiful autumn day even more. 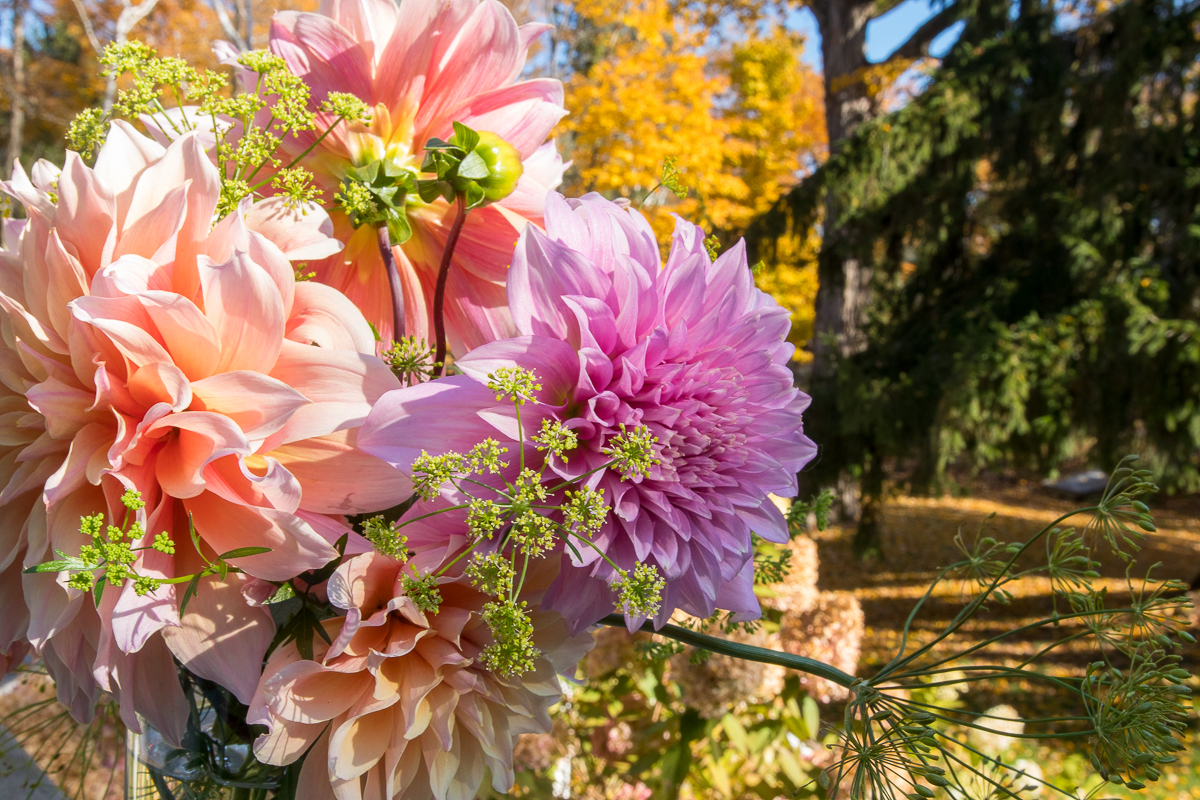 climbing hydrangea dahlia fall fall color monkshood
by Erin @ The Impatient Gardener
8 Comments
previous post: How I overwinter all the plants
next post: Getting the garage in gear for winter plant storage