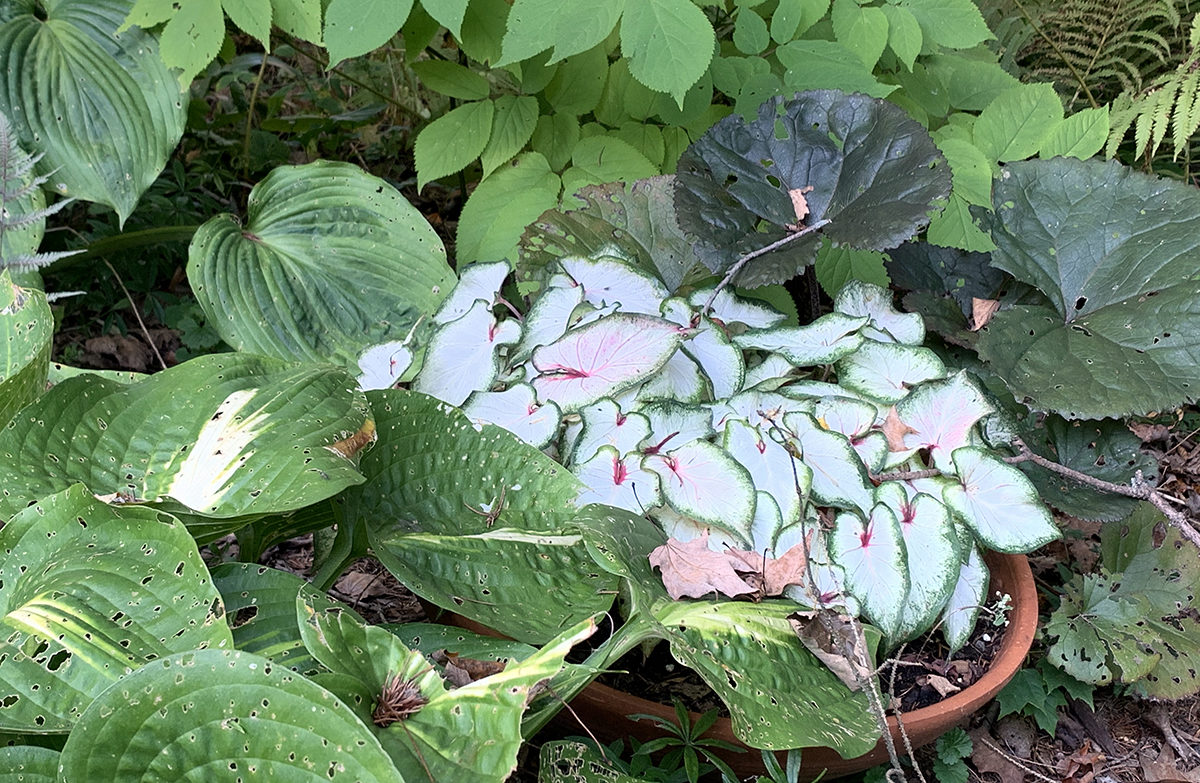 Fall cleanup used to be more about making sure the tools were put away, the leaves were off the lawn and the pots were cleared out of the way to make sure they won’t get in the way of the snowblower.

I’m not sure when it happened but somewhere along the line I started collecting an awful lot of plants that have special winter requirements, at least up here in zone 5.

So here’s what I do with them all.

I’ve got posts and now videos (below) that go into a lot more detail about the process, but here it is in a nutshell: After they are killed back by frost and allowed to sit in the ground just a bit (about two weeks), I dig all my dahlia tubers (anything not dug in zone 7 and below is probably a goner), rinse them off and then give them a few days to dry in the basement. 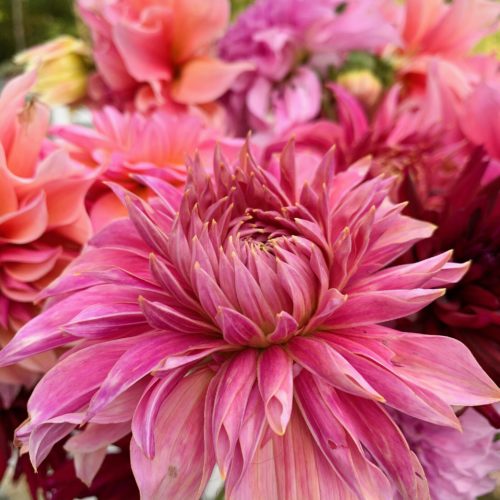 After that I nestle them in wood shavings (the kind used for small animal bedding) in plastic crates with ventilation in the side and lined with newspaper and tuck them in the coldest corner of my basement. Between 40-50 degrees is a great storage temperature but you can fudge that either direction.

For bulbs I already have around, this isn’t so much about storage, but rather about forcing it to flower when you want it to. I don’t save all my amaryllis bulbs, but I have kept a group of three (I long ago lost track of the variety) in a nice pot for several years now. In spring, they move outside with the rest of the houseplants and live on the deck. In late summer (theoretically) I move it into the basement and withhold water to give it a chance to rest. About six to eight weeks before I want blooms I bring it back out and treat it like a newly planted bulb in a sunny spot. 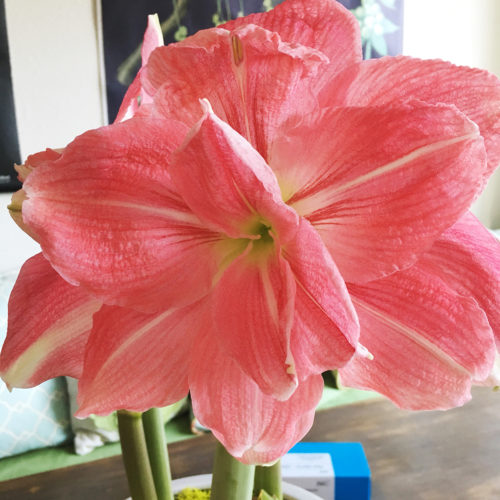 Well, that’s how it’s supposed to go. This year it didn’t get to the basement until late September (or maybe even early October), so there will be no Christmas blooms for me (it should rest for a minimum of two months and that math doesn’t work). But I’ll enjoy late-winter flowers just as much.

This was my first year growing Eucomis and I knew I had to have them after noticing them everywhere last summer. Have you ever had that happen? A plant that you’ve never noticed before catches your eye and then suddenly you see it everywhere you turn? 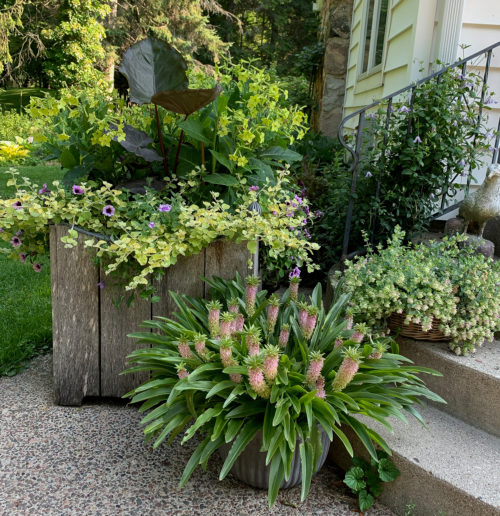 Eucomis looking great in a low container in this grouping.

I grew them all in pots (five or six bulbs per pot), so I brought the pots in to the basement. From here I’ll wait for the foliage to die back naturally and cut it off. I can either leave them in the soil in the pots (my preference) or remove the bulbs and store them somewhere they can breathe a bit. If the soil dries out enough in the pots, they’ll stay right there, but if it still feels damp (we had a lot of rain before I brought them in), I’ll have to remove them.

It was a year of firsts for me for a lot of these different bulbs/tubers/corms, and this was the first time I’ve grown elephant ears. I loved them and I definitely want to be successful overwintering them. Since I planted these in 3-gallon nursery pots and then planted the pots in the containers, I can overwinter them in the pots inside, letting them go dormant but not die. If I run out of room for storing pots (which seems likely), I can also store the tubers in the same manner I store dahlias, after cutting the stems back to 6 inches or so. 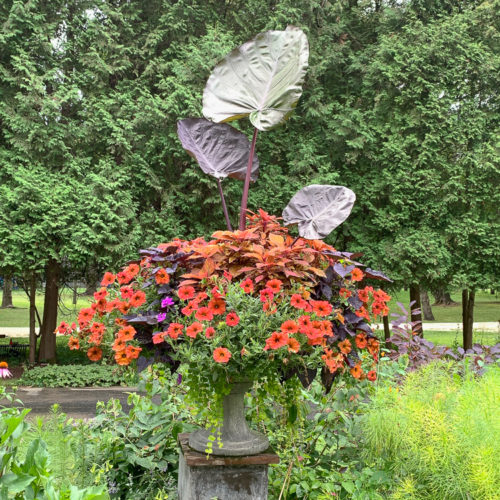 I loved ‘Distant Memory’ Colocasia growing in this pot in the garden this year enough to probably put it there again next year. 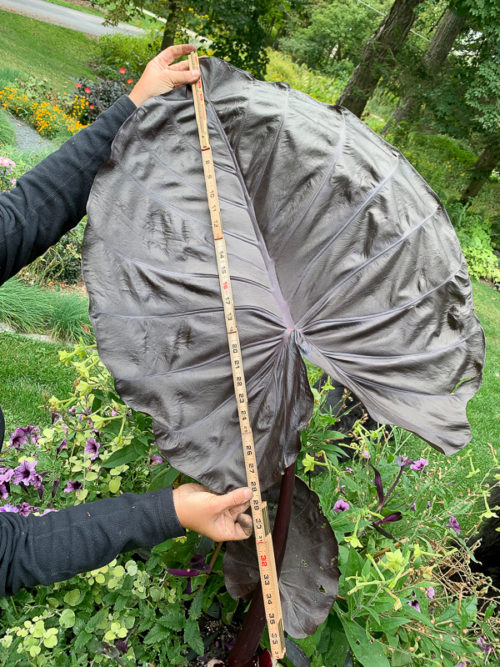 I planted several Caladiums in pots and then sprinkled them around the garden (it was a lovely effect) later in summer. The Caladiums didn’t have a long time to grow so they were fairly small, but still beautiful. What I’ve read on the Longfield Gardens site suggests that I can store these like dahlias, but I might be better off just getting new ones. 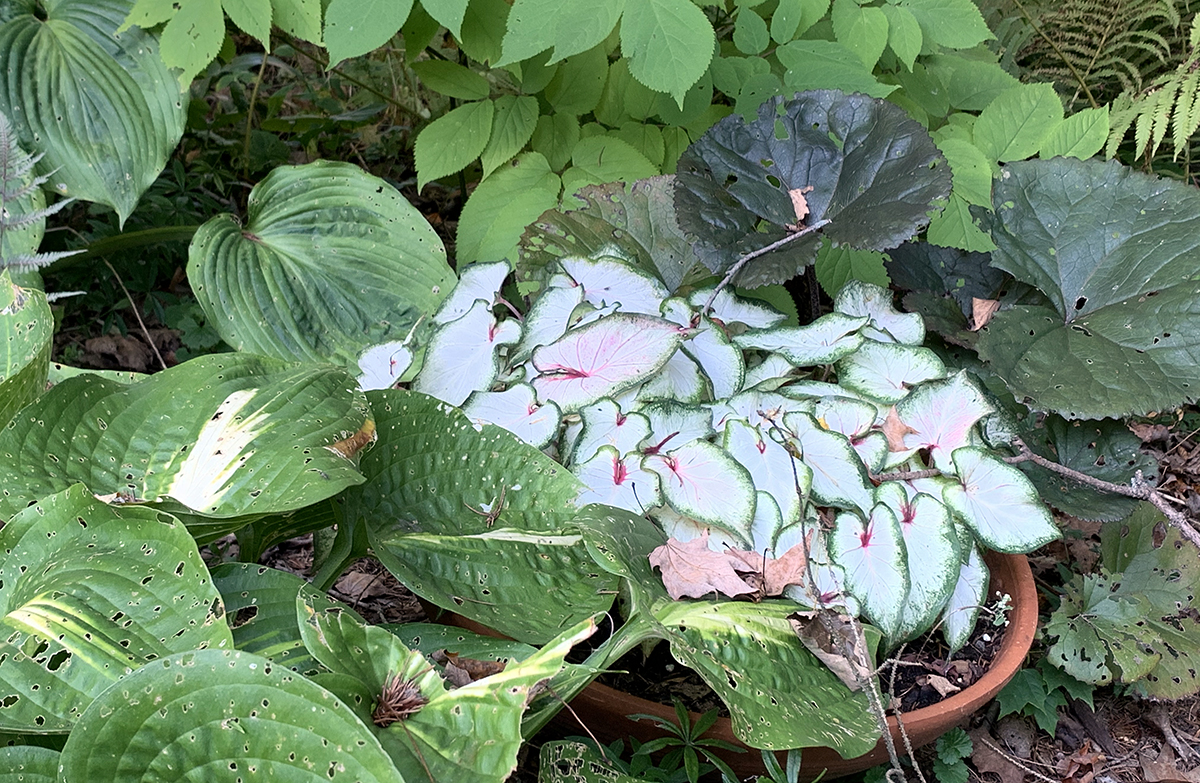 ‘White Wonder’ caladiums brightens up a shady spot in the garden.

I’ve written about how I overwinter shrubs in containers, and I plan to follow the same strategy this year (they don’t get moved into the garden until the ground is frozen). But this is a test year for me. Last year I lost all of the roses I had in containers stored in the garage. The boxwood, which is significantly hardier, was fine, but the roses were all toast. 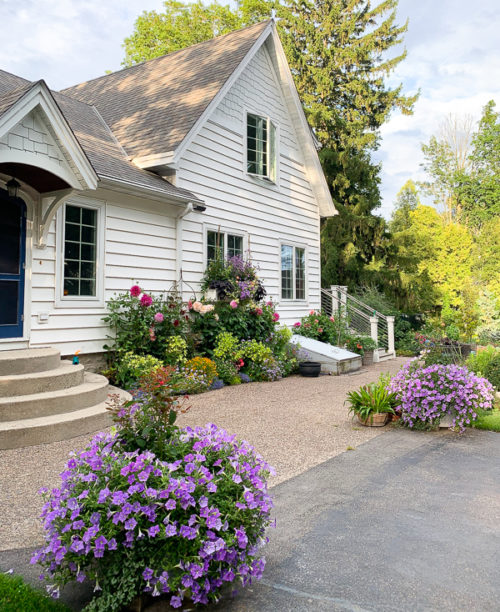 The roses in these petunia-stuffed containers are both new this year. For the first time, I had problems overwintering roses in containers in my unheated garage last winter.

We had extremely cold temperatures last winter (20 below zero or more, not including wind chill), and in my uninsulated, unheated garage, that was just too damn cold. If we continue to get extreme temperatures like that I’ll have to figure out some way to nestle the big containers in straw bales in the garage or something. That sounds like a good way to provide a lot of free bedding for mice and other critters, so I’m not wild about the idea, but plants can only endure so much.