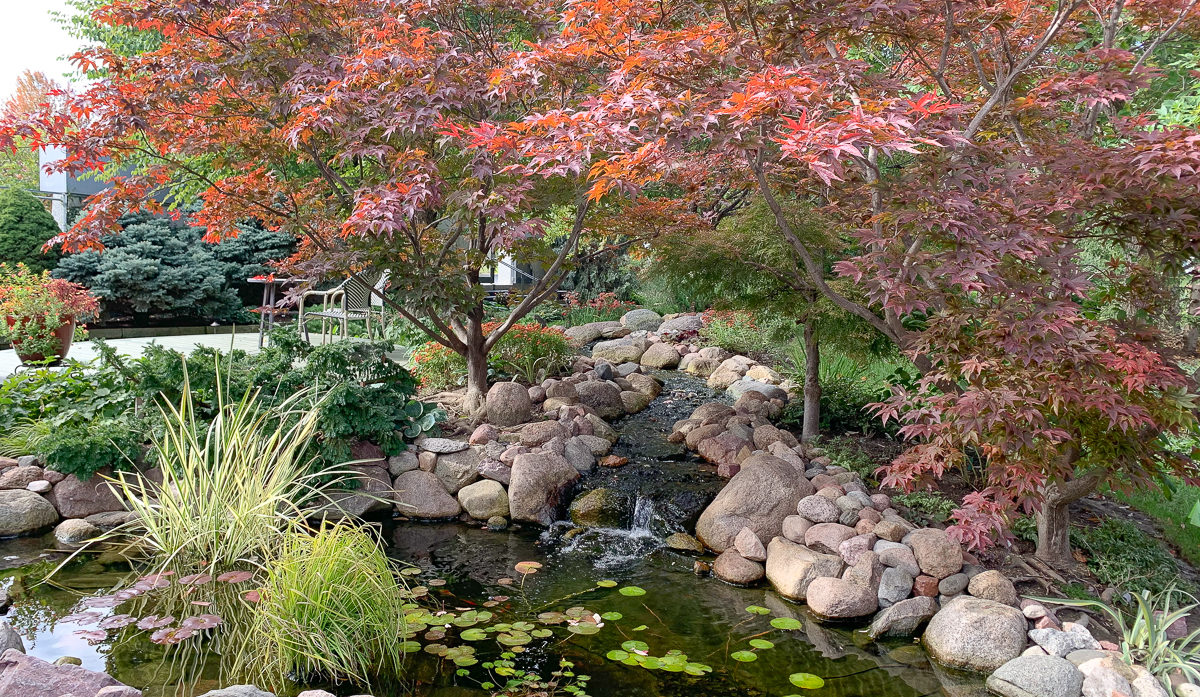 Life has been a whirlwind lately. Right around June life always starts getting busy. There’s the usual busy-ness of summer and I managed to add to that by having a group of master gardeners tour my garden in August. And just when I thought I’d get a breather, work got busy.

Somehow here we are rapidly approaching Halloween and I feel like I’m way behind on garden chores again and it’s been far too long since I’ve posted here. I aim to do three posts a week here and that hasn’t happened for a long time. 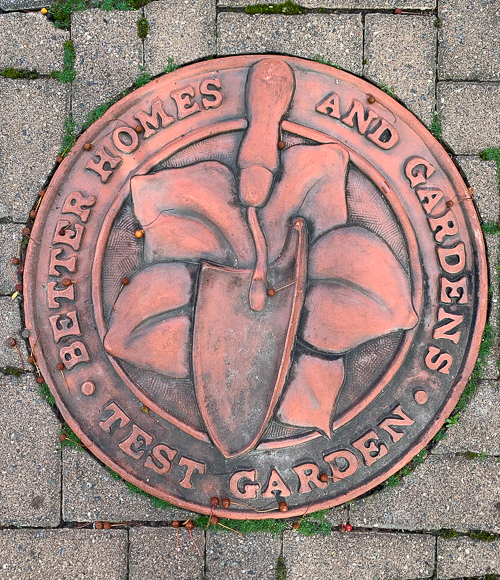 A serious of large, charming tiles are inset in the walkway around the garden.

One of the things that kept me busy earlier this week was a swing by the Meredith Publishing headquarters (home of Better Homes and Gardens, Country Gardens, Midwest Living and more) in Des Moines, Iowa, for a quick project with Troy-Bilt (who I’ve worked with for several years now). Although it was a very quick trip, we were fortunate to get a quick tour of the Better Homes and Gardens test garden.

Since it wasn’t on the agenda, I was caught a little off guard and did a relatively lousy job taking pictures, but the tour was fascinating. About half a city block in size, the garden is walled in on one side and feels like like a retreat. A courtyard is enclosed by mature crabapples planted in raised beds. Or perhaps it’s more correct to say the courtyard is sunken with retaining walls supporting the trees. Either way it’s a delightful space for employees to take lunch, have meetings or host social events. 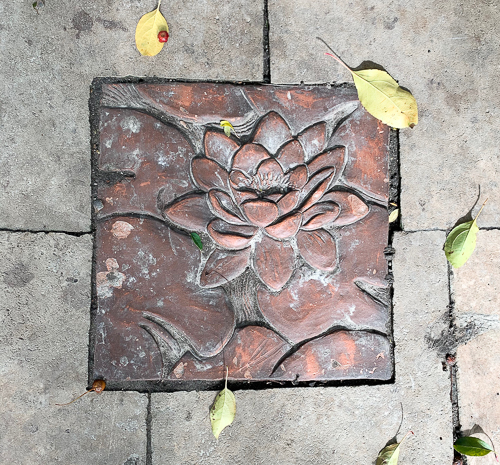 The garden is also used for photo shoots, and a pair of mini decks are the perfect setting for patio furniture, grills and more. 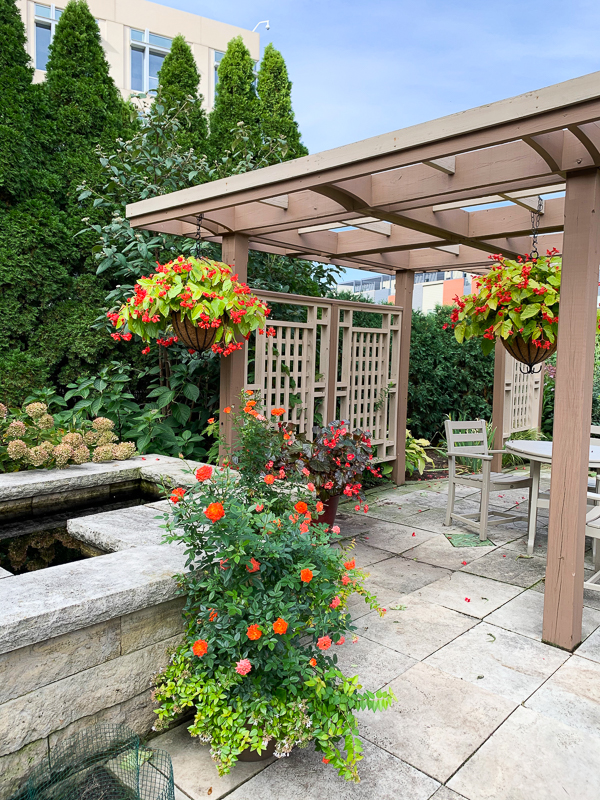 This patio area not only shows off hanging baskets (with ‘Canary Wings’ begonias still going strong), it also is used in photoshoots.

With all that going on in this garden, you might expect it to be close to perfect, even after it had seen hard frosts. And what’s wonderful about it is that is intentionally not perfect. It is, both in expectation and reality, a true test garden.

Garden Manager Sandra Gerdes makes no excuses for plants that look less than stellar; that’s what a test garden is for. She grows both new plants as well as comparable tried-and-true plants for an accurate comparison. 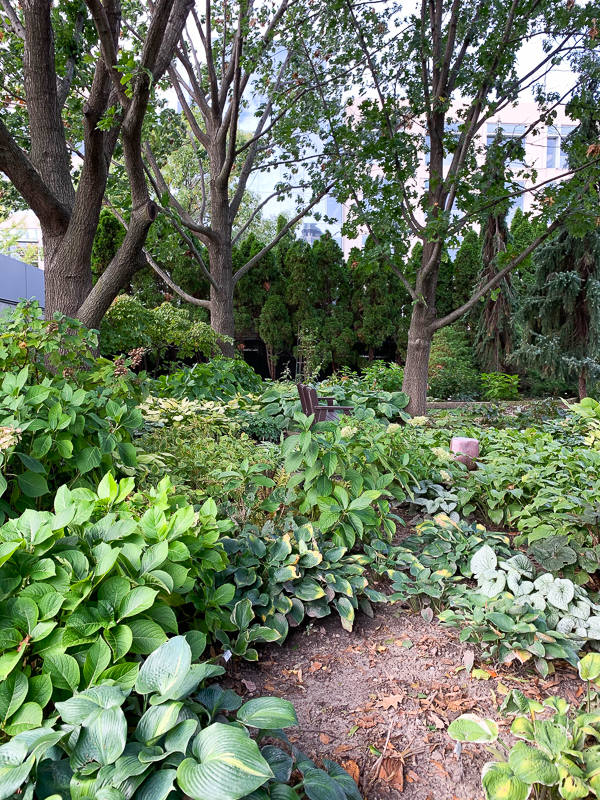 This shady area is full of texture, proving that shade need not be boring. 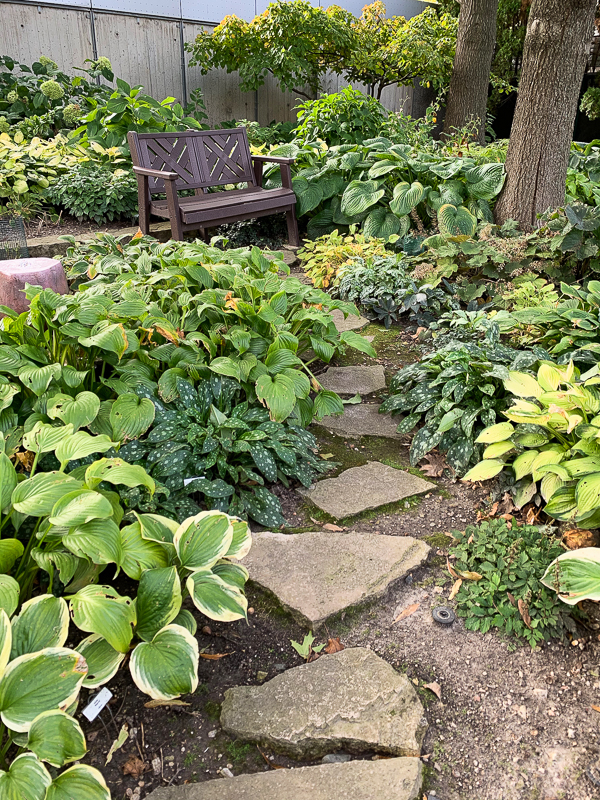 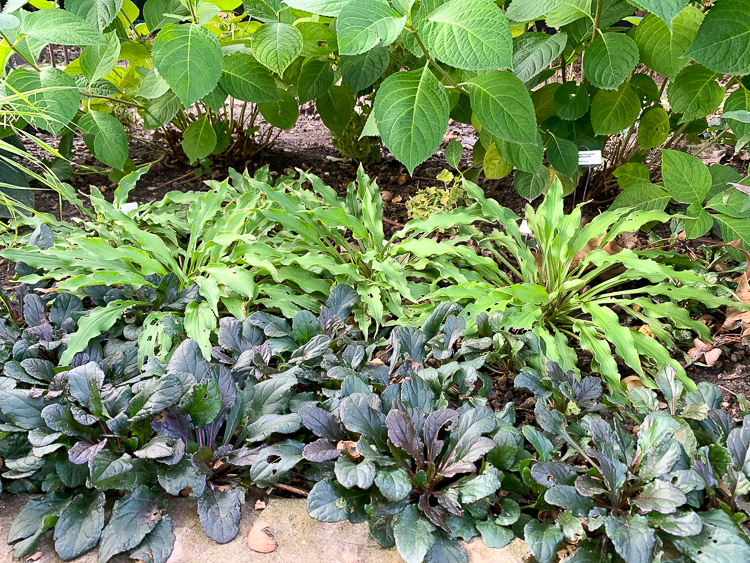 This combination of ajuga and a strappy hosta (possibly ‘Curly Fries’) caught my eye. A row of hydrangeas was planted behind it.

It’s truly the end of the season in this garden, and parts of it look much like mine right now. In particular I noticed some hostas looked quite haggard, as do most in my garden. Slugs have been busy—there is no spraying, no intervention on behalf of the plants here—and the evidence is obvious. But occasionally I came across a hosta that was looking really good—great even, considering it’s the end of the season. Slugs, apparently, paid it no mind. That is valuable information. 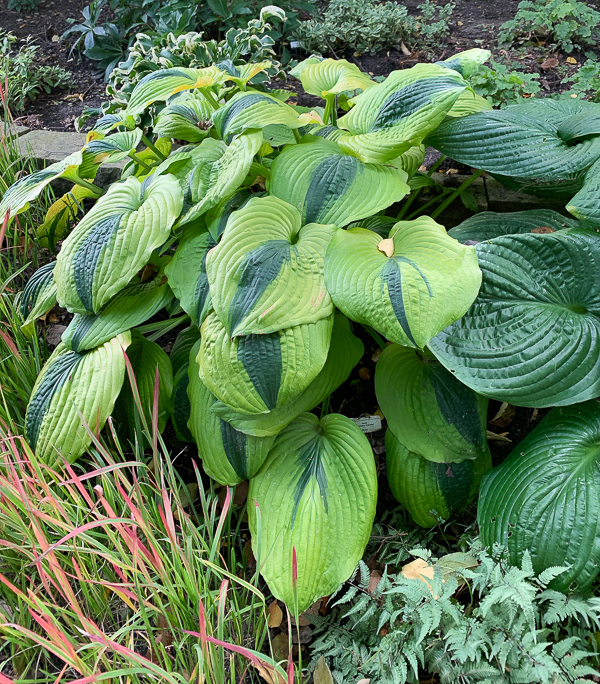 ‘Goodness Gracious’ hosta caught my eye. Despite temperatures down to 28 degrees and a full season in the garden, its foliage was looking nearly perfect.

For a relatively small garden, there is an incredible variety of styles represented. I take this as proof that you can mix and match garden styles (with intention) even in a small space. There’s a texture-rich shade garden, native prairie-type garden, a Japanese-esque water garden, a vegetable garden, vertical garden areas and so much more. 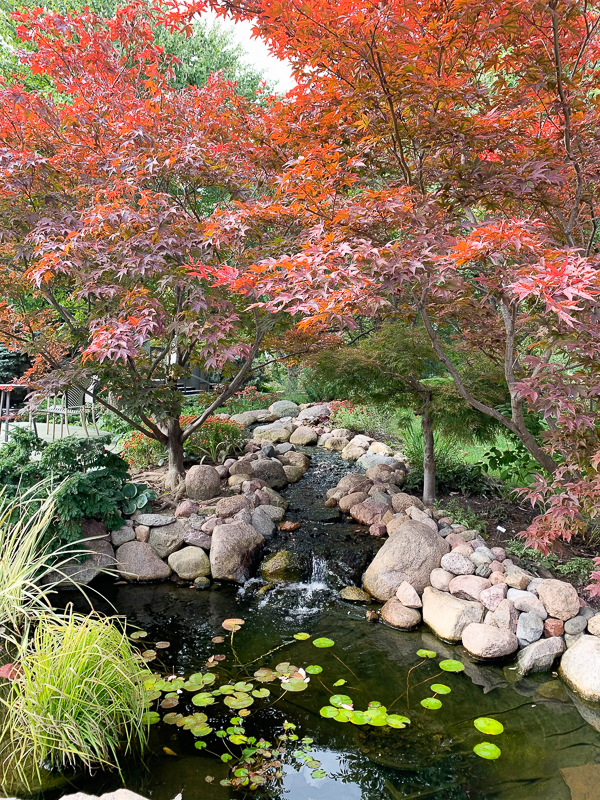 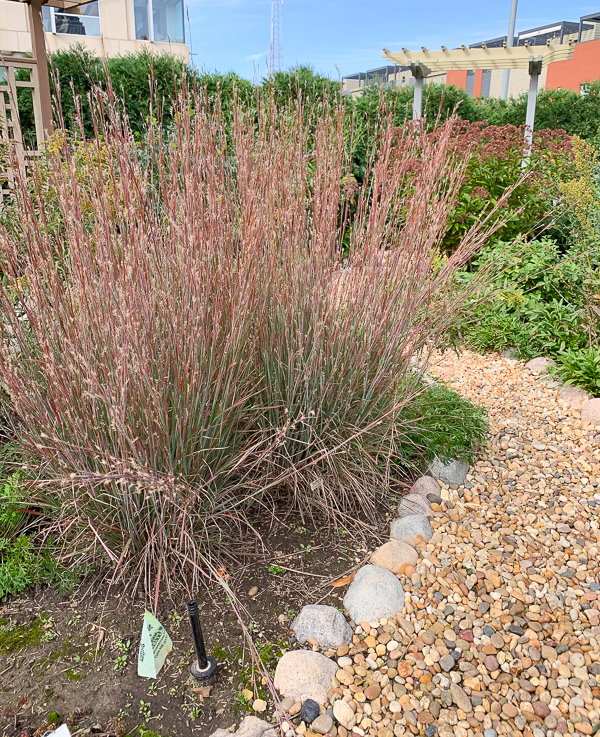 This little bluestem grass—Schizachyrium scoparium ‘Standing Ovation’—caught my eye from a distance, and it turns out it’s a favorite of Test Garden Manager Sandra as well. It’s on my must-have list.

I’ve been fortunate to have had the opportunity to see a few test gardens that also serve as display gardens. It’s a tricky mix to get right because you want the public (most test gardens are open at least occasionally) to be inspired and enjoy them, but properly testing plants in a rough-and-tumble fashion doesn’t always result in the prettiest displays. Often the true test areas of the garden are a bit hidden in the back. That’s not the case in the Better Home and Gardens test garden. 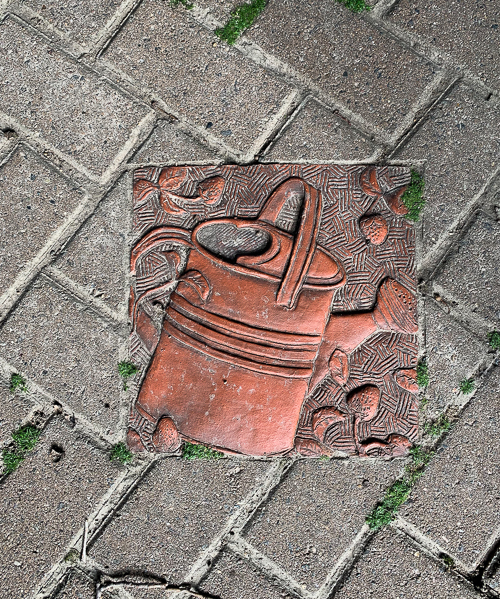 Plants are given some protection from an army of destructive rabbits—”To at least give them a chance,” Gerdes said—and some watering to help them get established, but after that, they are mostly on their own. Some, of course, don’t make it. And you might think Gerdes would be a little disappointed about that, but this eager gardener knows it’s an opportunity to try more plants. Space is at a premium and it’s survival of the fittest.

It was a delight to see a garden—one you’ve seen countless times before if you’re a Better Homes and Gardens reader—where plants do what plants do. And gardeners are better for it. 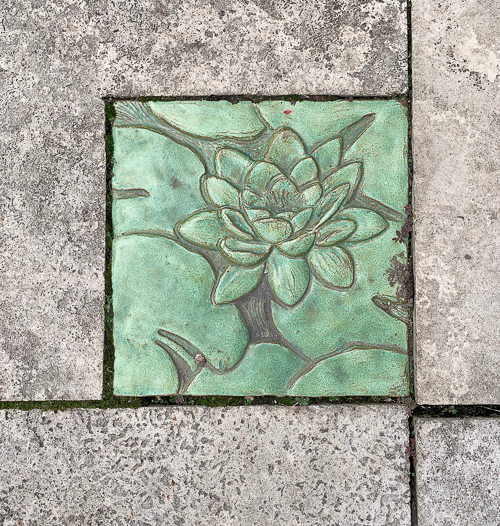 better homes and gardens bhg fall garden tour test garden troy-bilt
by Erin @ The Impatient Gardener
2 Comments
previous post: The new plants I’ll grow again, and the ones I won’t
next post: How I overwinter all the plants