There are gardeners who eschew new plants, and although they may have some valid arguments (among them that they are hybridized to a point where they are no longer of use to pollinators and the species is just fine), I’ll never get sick of trying new plants in the garden.

I enjoy the challenge of getting to know new plants: how to grow them, how to use them and what they are all about. I won’t say that gardening would be boring without the challenge of growing new-to-me-plants, but it does make things more exciting.

And this year, like every year, there were a few new (to me, although in some cases they are new to the market) plants that get high marks and a few that fell short. Here’s a quick review.

Last year I grew ‘Lemonade’ cosmos and was in love it with it. This year I grew its sister ‘Apricot Lemonade’ and I’m positively swooning. When I posted a photo of it on Instagram, someone described it as “unicorn” colored and there’s something to that. It seems to have all the colors and they are all good. It grows in clusters of flowers, which is charming, although a bit challenging when some are spent, and it is a little smaller than ‘Lemonade’ was for me last year. But well worth growing, and not too tall. 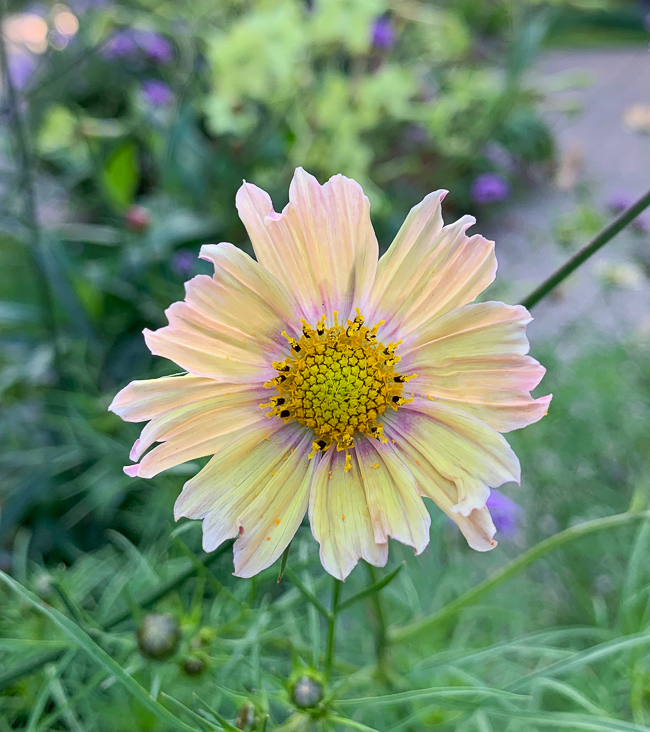 I will admit: I have always been underwhelmed by Caladiums. They just always seemed a little bland to me. Proven Winners is launching a line of Caladiums on the market next year, and they sent out some bulbs well into the summer (they’ll be selling plants next year, but they sent bulbs to some garden writers to try). I hastily threw them in some pots and then tucked them in the garden.

And now I can’t figure why I didn’t like them before. They are an excellent way to bring color to a shadier spot. I particularly like the idea of mass planting them. My favorite of my containers was this one: ‘White Wonder’. 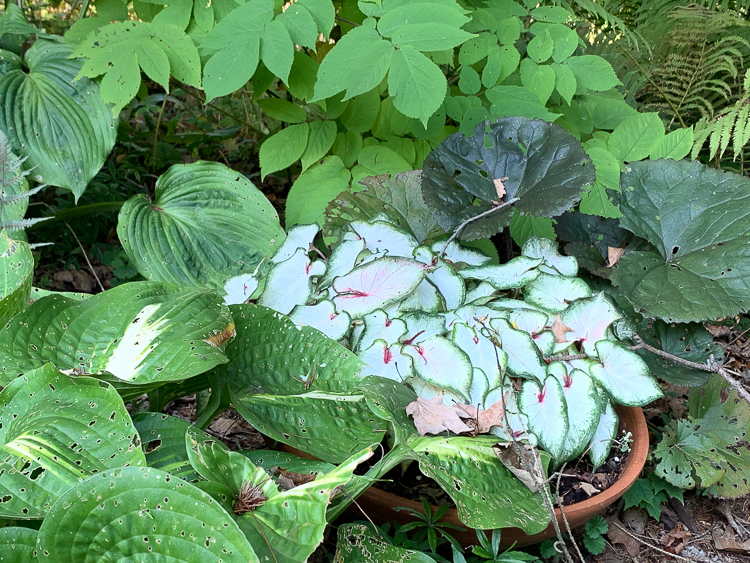 My affinity for dahlias has been well established and every year I grow a few new ones. Here are two of my favorites from this year.

‘Breakout’ is a large dahlia. Probably not quite dinnerplate, but close, and it has the softest pink and yellow colors. In some ways it is a similar color to ‘Café au Lait’, but the petals are wider and the whole flower is a little flatter. Like all my large-flowered dahlias it hasn’t been appreciating the crazy amounts of rain we’ve been having, but its still beautiful even when it’s pouting. 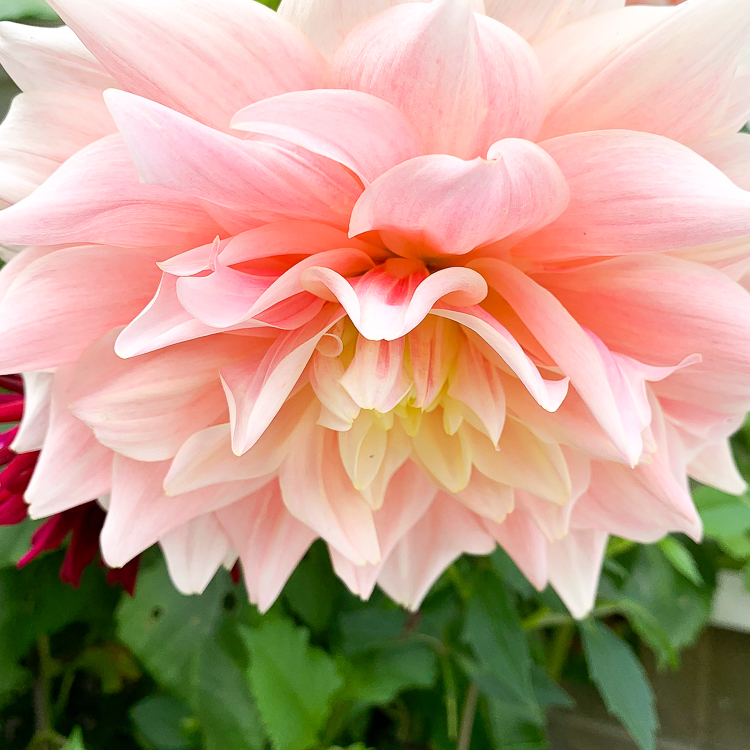 I’ve been a fan of the single dahlias for a long time, but I am enamored with ‘HS Date’, which I fortunately planted right along the patio. It has dark foliage and lovely bicolor blooms that the bees and butterflies like just as much as I do. 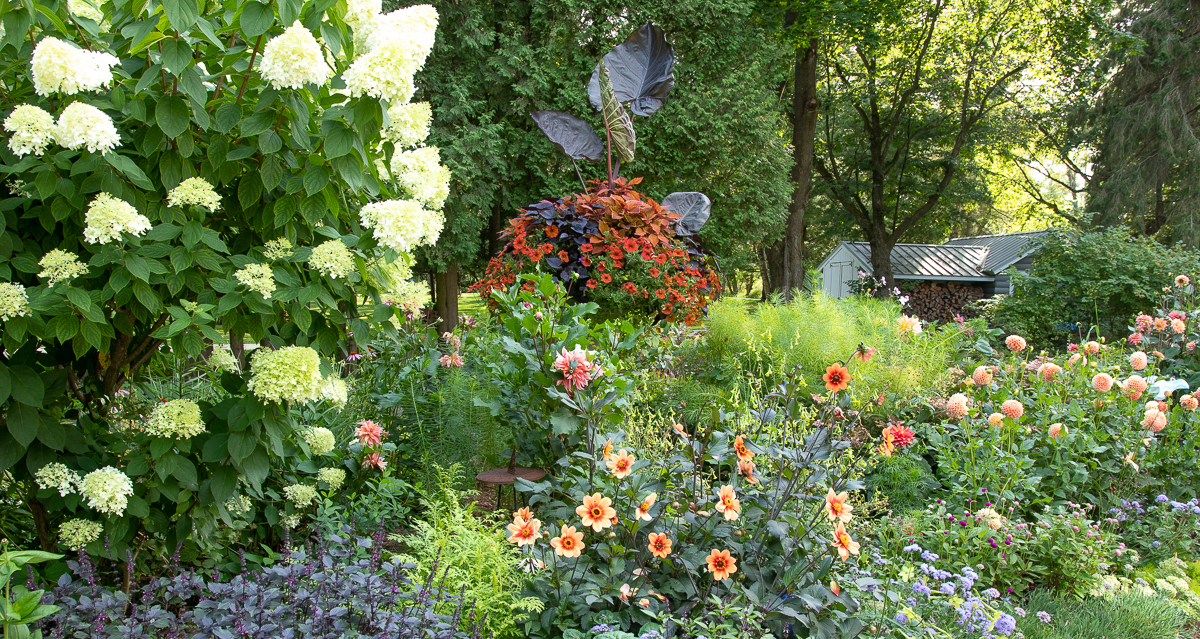 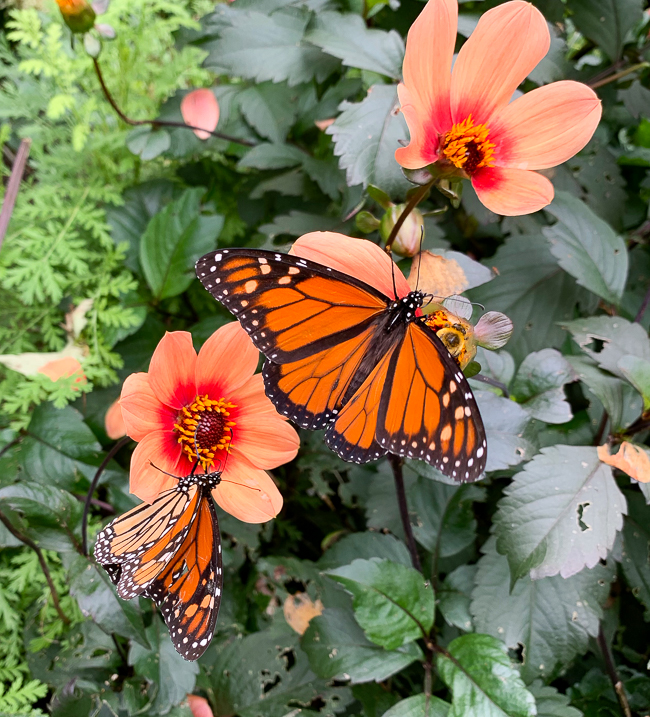 I did a video tour of my dahlias this year on YouTube. You can catch it there or below.

Nicotiana is always on my must grow list (I extolled the virtues of Nicotiana alata ‘Lime Green’ here), but this year I also grew Nicotiana langsdorfii. Its nodding, tubular flowers are much less in-your-face than N. alata, but it has a certain charm. It almost has a grasslike quality when it jingles around the breeze. I’ve been saving seed from it (very easy to collect) so it’ll be on next year’s list. 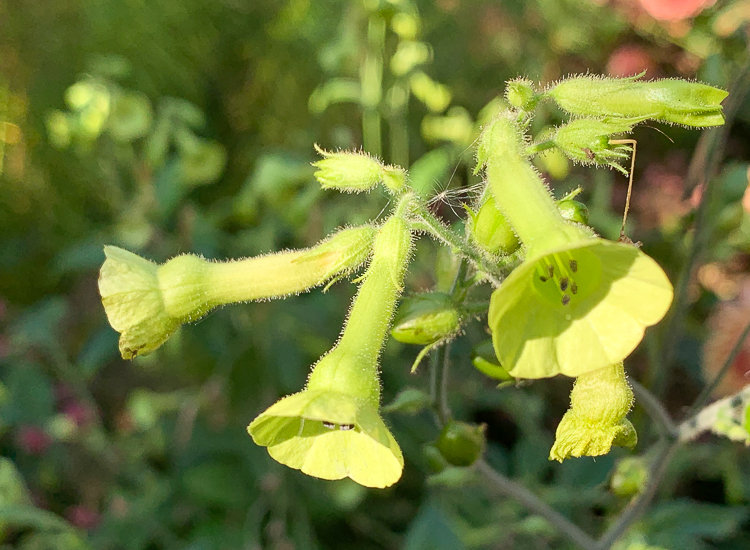 In much the same way that I’ve written off Caladiums in the past, I also never knew much about Colocasia until I grew ‘Distant Memory’ this year. In order to put out that much growth they need a lot of food and a lot of water, so I planted them in large nursery pots fortified with compost, manure and extra time-release fertilizer and tucked that pot in the the bigger container. This allowed me to concentrate a good amount of water on them as well.

You’ve seen oodles of photos of this plant already, but here’s an idea of just how big those beautiful dark purple leaves are. That one is 28 inches long. 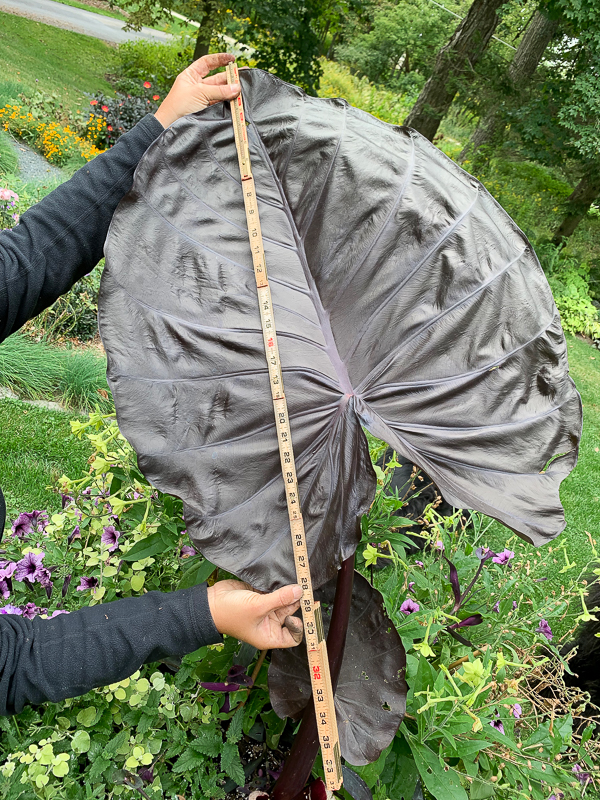 I also grew Eucomis (aka pineapple lily) this year for the first time. I planted mass planted three varieties in three different containers. High marks on these as well, and the strappy foliage is nice even after the flowers fade. I’ll save the bulbs and see how they do next year. 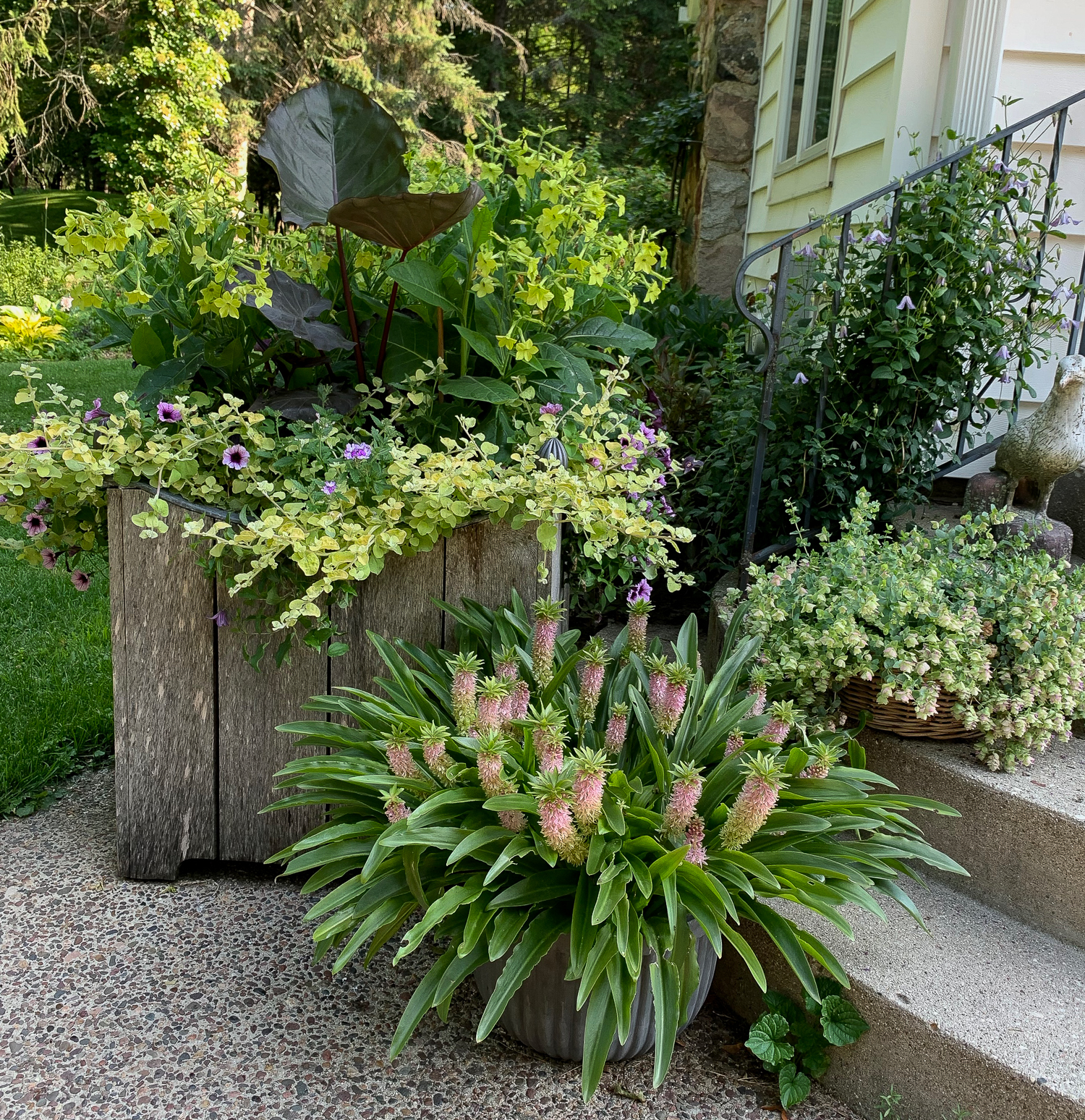 Eucomis looking great in a low container in this grouping.

Now we move onto a few plants that I’m less enthusiastic about.

I have a qualification on Euphorbia ‘Diamond Mountain’, a large form of the very popular ‘Diamond Frost’. I planted one in a container by itself and three more in the annual border along the patio. Euphorbia is a bit of a slow starter, so it was well into the second half of summer by the time the one in the container was getting to size. That treatment was a perfect use for it and I’ll won’t hesitate to plant it alone in a container again. But the three I planted in the ground were completely overwhelmed by other plants and I’ve not seen a sign of them for a long time.

This one is easily at it’s “max” size of 30 inches wide at this point. 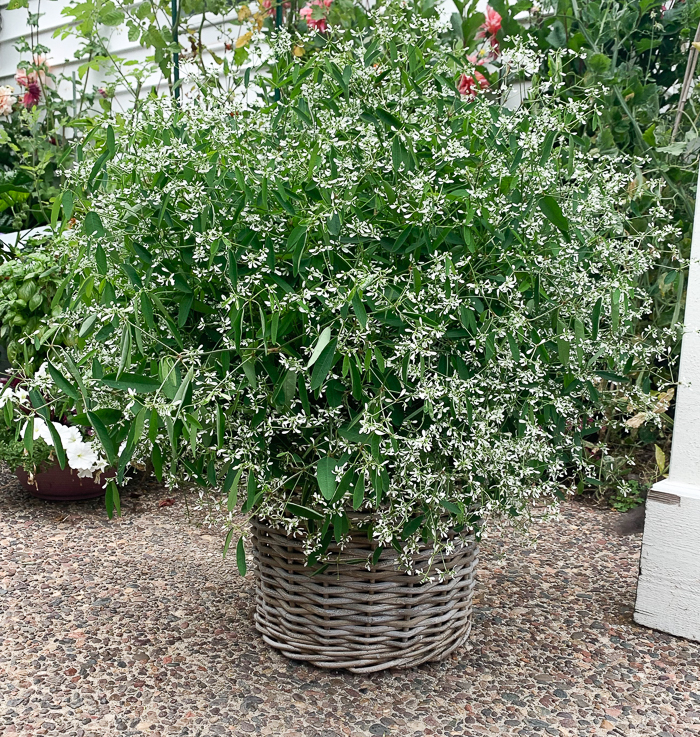 ‘Big Duck Gold’ marigold is a great plant, don’t get me wrong. It is a very strong grower and has been flowering like gangbusters. This is no surprise as it’s an All-America Selection winner. My problem with it has nothing to do with how it grows or its form. It just comes down to it being a really tough color to work into my heavy-on-pink garden. The color is truly gold with just a tinge of orange rather than mustard. Great plant, just the wrong color for me. 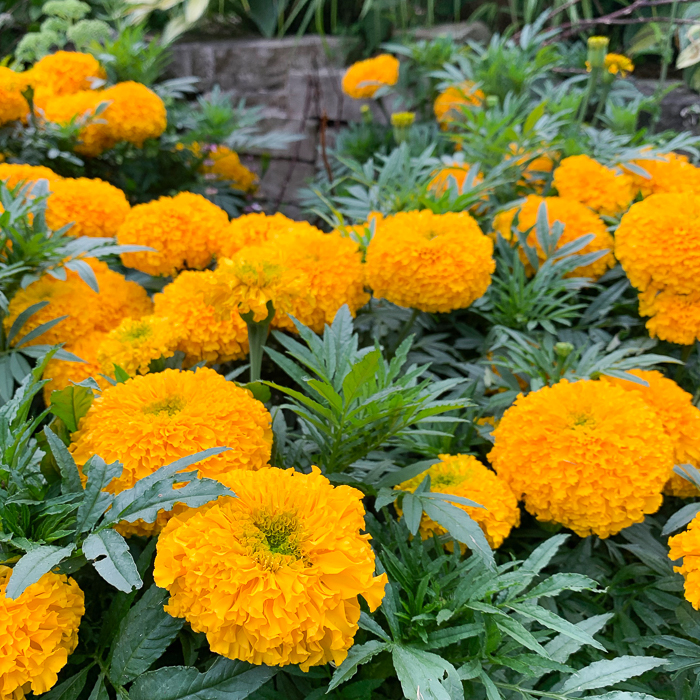 And last, and I guess least, of my new-to-me plant roundup is Cerinthe, aka honeywort. I planted a lot of this, all grown from seed.  I liked its unusual color and succulent-looking leaves at first. And the bees certainly loved it. I grew it in part for use in bouquets, but the first time I used it, it flopped terribly.

I learned that it works best to put the ends of the cut stems in boiling water for about 10 seconds and to give it a good amount of time to soak up water (supported by rolled up newspaper or something else if you want straight stems). My method of “floral arranging” is more of the “Stick it in a vase” variety than carefully planned, so that was all too much hassle for me.

To make matters worse, just gets messier as the season goes on. There just aren’t enough redeeming qualities for me to grow this again. 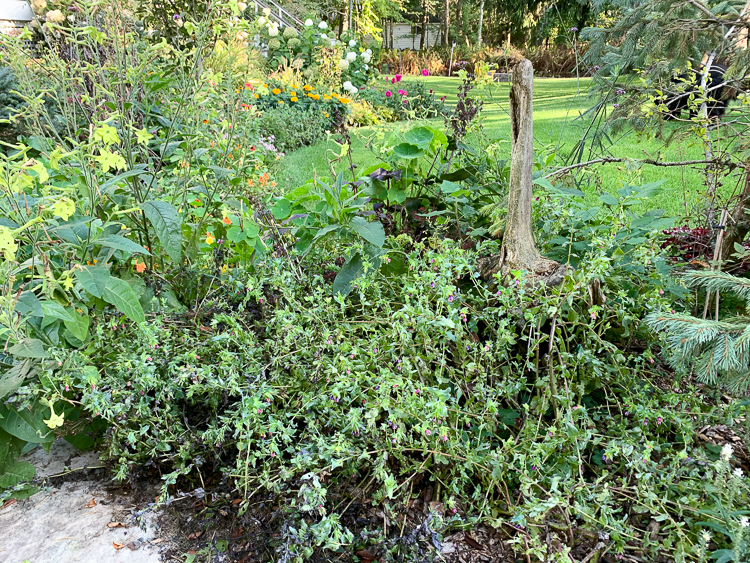 Oh well. You win some, and you lose some. And when else is losing as much fun as it is in gardening?

cerinthe containers cosmos dahlias euphorbia new plants
by Erin @ The Impatient Gardener
6 Comments
previous post: Summer in review as seen through one container
next post: A test garden that truly puts plants to the test