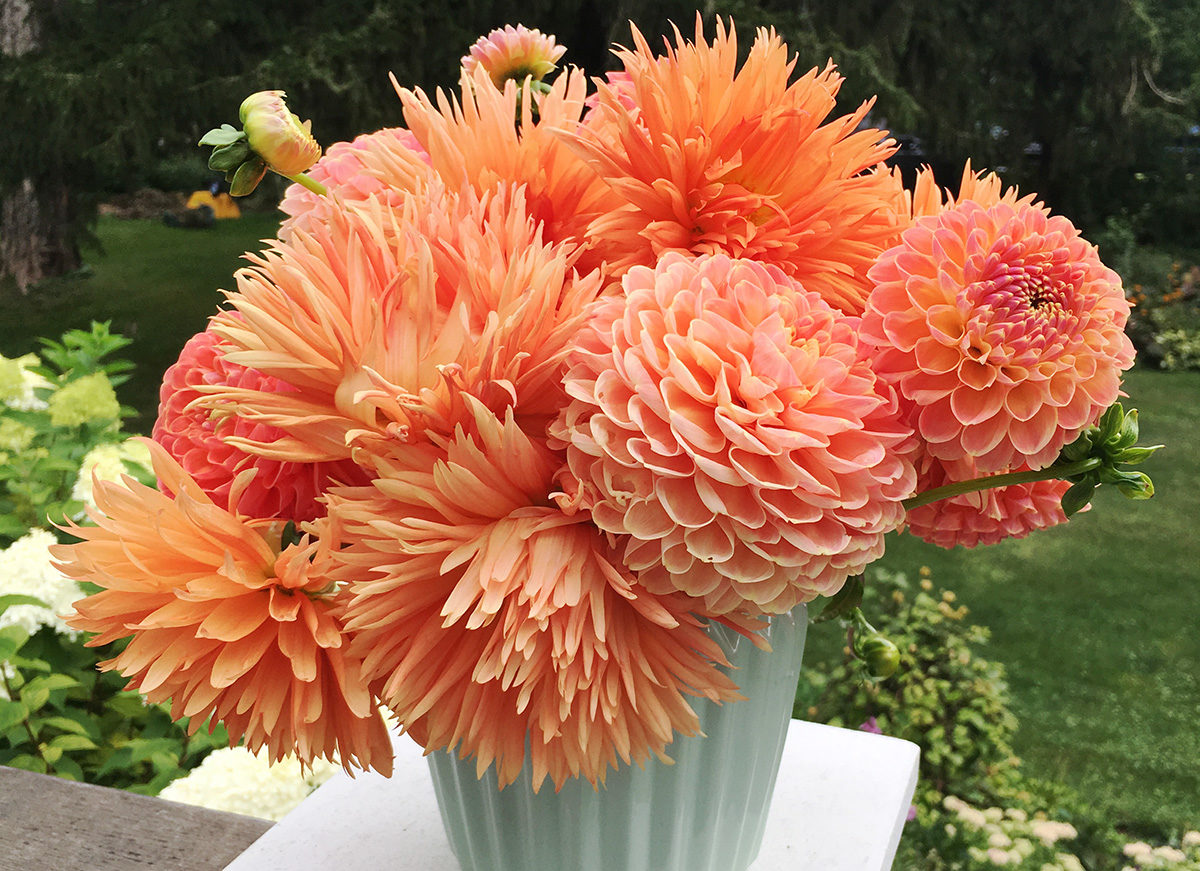 Dahlias have become quite the favorite flower. Dare I say they’ve even become a bit trendy? I hate the idea of a flower being a fad. I prefer to chalk up the interest in dahlias to a combination of access to lovely new varieties, more information available on how to grow them and social media nudge from floral designers and growers (such as Erin at Floret Flowers) who show them at their most beautiful.

If you grow dahlias as annuals from tubers the cost of them can add up. But if you put in a little extra work and store them  over winter (in areas where it is too cold to overwinter them in the ground, which is anything colder than zone 8, although you can sometimes sneak by in zone 7 with a thick layer of mulch), the cost becomes much more realistic. But I like to save dahlias because some varieties can be difficult to find, so once you have a good one it’s best to save it yourself.

‘Cafe au Lait’ dahlia is one of my favorites and because of its popularity, it can also be difficult to find at a reasonable price so I always make sure I save these tubers.

I’ve tried a variety of methods for dahlia storage, some more successful than others. It’s one of those things that I think I may be overthinking to be honest. Some directions for storing dahlias are no more complicated than sticking them in a unclosed plastic bag and I’ve heard from lots of people who throw them in a plastic crate and walk away.

Regardless of what method you use for storing dahlias, and I’ll get to more on that, when you store them is important. You want to wait until there is a killing frost before you do anything. You’ll know it when you see it: One morning you will wake up and your previously beautiful dahlias will have turned nearly black and flopped over. Most tutorials will tell you to cut the stems back to about 4 inches at this point, but I will admit that this year I skipped that step. Part of the issue with that is that dahlia stems are hollow and if you leave that hollow stem open, water will get in and rot the tuber, and that is exactly what we’re trying to avoid. It’s recommended that you cover them. In the past I’ve covered the stem holes with aluminum foil.

The point of this exercise is to first “tell” the tuber that it’s time to go dormant by waiting for the killing frost and then to have the tuber focus on storing all nutrients, rather than having them to to the stems and leaves, before you dig. That’s a whole bunch of anthropomorphism there, and obviously I don’t believe that my dahlias, no matter how fabulous they are, have the ability think, but you get the idea.

After you’ve done all this, you want to wait a bit, maybe two weeks, before you dig them up, although no matter what you must do this before it gets too cold, so it’s better to do this sooner rather than later.

Here’s where I insert a lesson I’ve learned time and time again: Mark your dahlias before you dig them! I know you think that somehow you have a superhuman ability to remember which tubers are which even though they all look like a bunch of deformed potatoes, but you don’t. I speak from experience here. 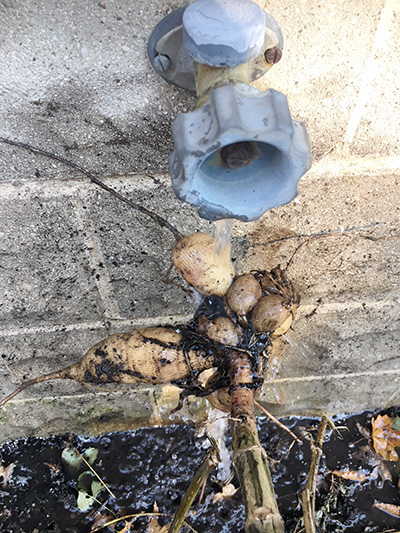 I give dahlia tubers a quick rinse to knock off the majority of soil before storing them.

Labeling accomplished, dig them carefully. I use a gardening fork (the kind on a long handle) and carefully work my way around the base of the plant, giving it plenty of room. Any tubers that are damaged in any way must be tossed, so do your best not to spear any. Then I wash them off with the hose (or straight out of the spigot). Judging by the number of people who say you don’t have to do this step, I think you could skip it, but I prefer a cleaner tuber so it is easier to inspect for damage and for more labeling later on. 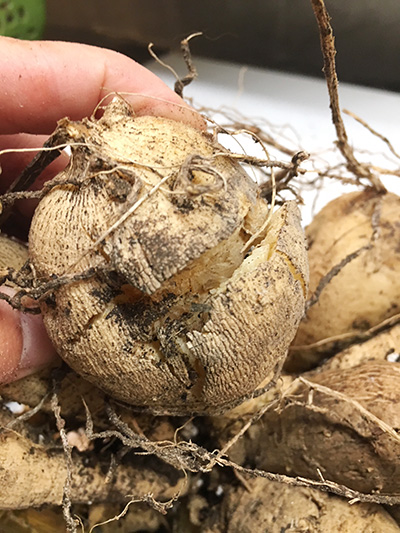 Any damaged tubers must be cut away from the cluster and thrown away before storage. 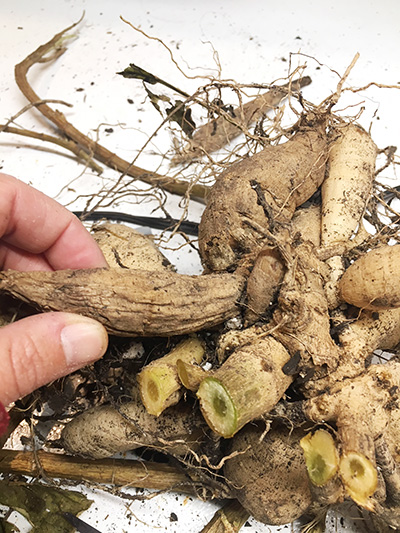 Soft tubers sometimes look a little shriveled. These should be removed as well.

Rinsed tuber clusters (and you will be amazing how much the single tuber you planted in spring has multiplied) then go to a cool basement to dry for a couple days. Remove any tubers that are not firm or are damaged in any way. You can cut the little root off them if you want to clean them up further but it is not necessary. 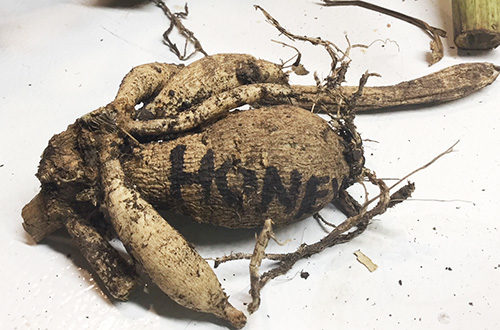 Use a sharpie to write the name of a dahlia right on the tuber so you’ll know what it is next spring.

And this is where you decide how to store them. Three years ago I packed them in peat in a big plastic bin and stored them in my parents’ slightly heated garage. When I opened them up in spring, almost all of them had turned to dust. They simply dried up. I think I used very old peat moss and it sucked all the moisture out of them.

Last year I followed this method of wrapping them in plastic wrap. I know that sounds crazy right? It’s highly labor intensive and requires dipping them in a weak bleach solution and dividing them into individual tubers before storage. I stored my plastic packages in the coldest corner of our basement and had a great success rate using this method. The problem with it though is that I don’t really want to start with individual tubers every year. I don’t need dozens of dahlias; I need a few large dahlias.

So this year I’m back to storing the full clusters of tubers that I dug up. Prior to storing them I used a Sharpie to write the name on the tuber clusters in several places in hopes that I won’t lose track of what’s what come spring. I again packed them in a large plastic tub, but this time I used animal bedding wood shavings that I picked up at the feed store. Not only is it more eco-friendly than peat, I also believe it will be less likely to draw moisture out of the tubers. Each cluster was packed with lots of shavings around it so it wasn’t touching any others. I sprinkled just a little water on top of the top layer of wood shavings just to keep some (but not too much) humidity in the bin and I’ll check it again in mid winter. 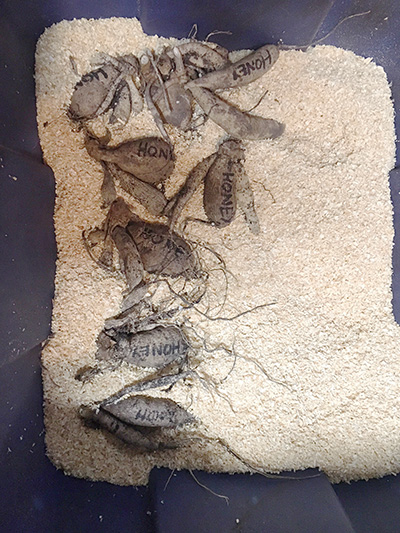 Like I said, I’m probably making this into a bigger deal than it needs to be. But I love my dahlias and I want them to enjoy their winter break so they can show me their appreciation next summer. What’s that I was saying about anthropomorphizing?

dahlias how-to
by Erin @ The Impatient Gardener
22 Comments
previous post: A new look (for the site & the garden)
next post: Winter care for roses in cold climates