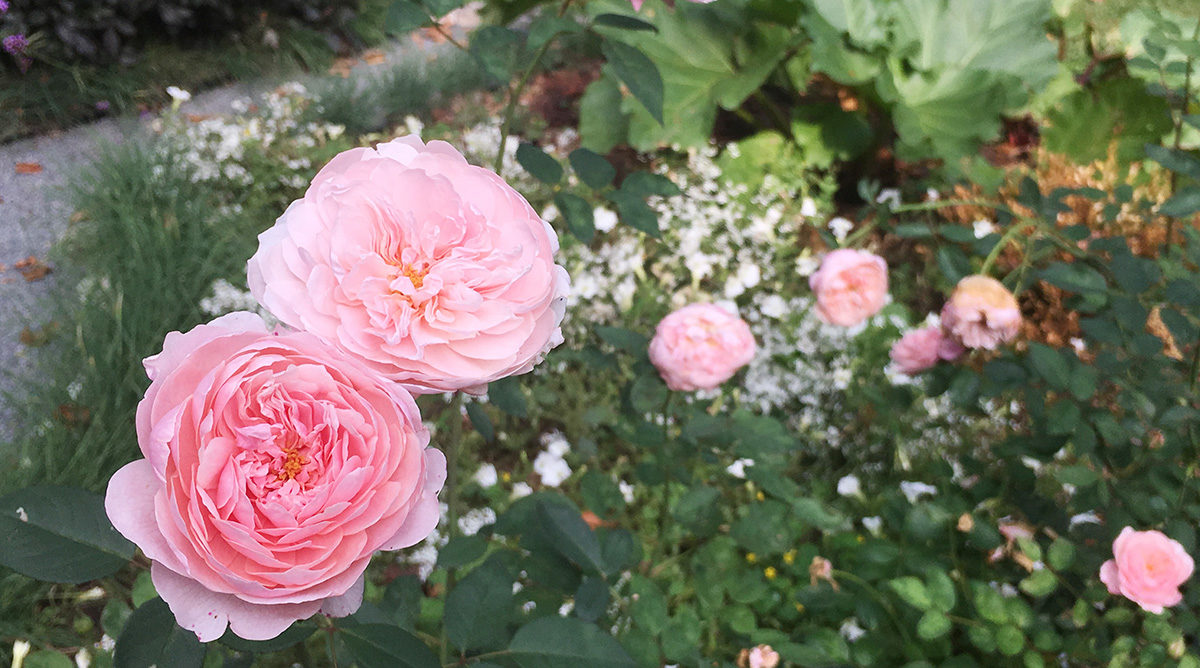 FYI: I’ve posted an update to how this all worked out at the bottom!

I am not a rose expert.

In fact, longtime readers may recall that it wasn’t too long ago that I publicly swore that I would never grow roses again. The problem with making such declarations is that it’s difficult to hide from them when just a matter of months later you decide that you do, in fact, need roses—the kind with so many petals they hang from the canes and fill your nose with amazing scent—in your garden and your life.

At the time of my (apparently hasty) declaration, I was frustrated not with the newer easy-care landscape roses, which I’ve always found to be easy to grow, but with any number of old-fashioned roses I had grown in the past. And the biggest problem I had with them was winter dieback and just full-on dying.

But then I realized that I need highly scented, beautiful roses in my life, and that’s difficult to find in new roses (although there is at least one—’At Last—that seems to fulfill that promise). So while I didn’t become an expert, I did do some more research and I learned to select roses a little more carefully. Own root roses that are hardy to my zone (5) or even one lower are the non-coddle zone for me. 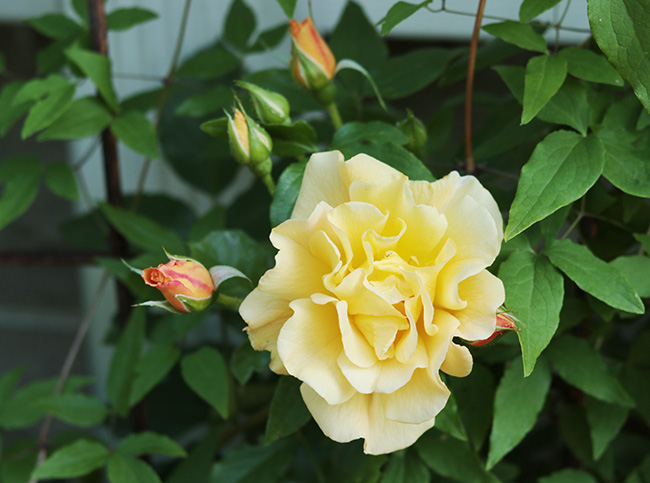 ‘Autumn Sunset’ climbing rose has blooms that range from apricot to pale yellow, a color combination that seems to go with everything in the garden.

When I chose a new climbing rose—’Autumn Sunset’—for the front of the house I went to local roses experts to help me select one. And it was a great selection, hardy as heck, but every year the canes have died back to the ground. Nice new canes grow each year, and amazingly quickly, but my vision for this rose is that it becomes a prominent feature on the front of the house, and that can never happen if I have to start with new canes every year.

Meanwhile, I planted six new own-root ‘The Alnwick Rose’ roses in the circle garden in spring and while they should be plenty hardy, I don’t want to take the chance of losing them.

A serious winter strategy was in order. 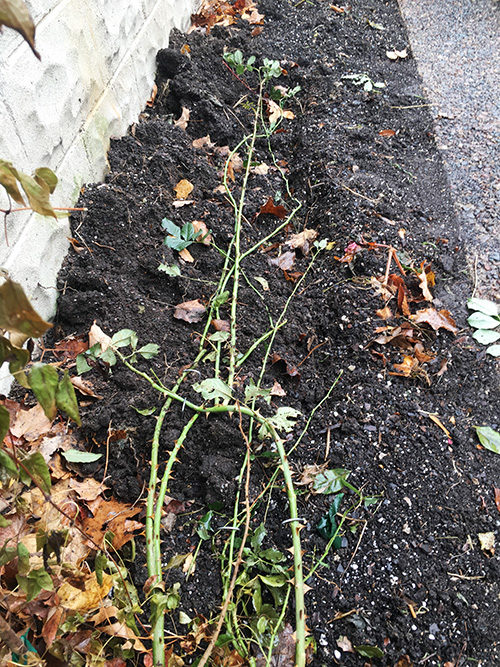 I dug a trench for the climbing rose canes, then laid them in it. 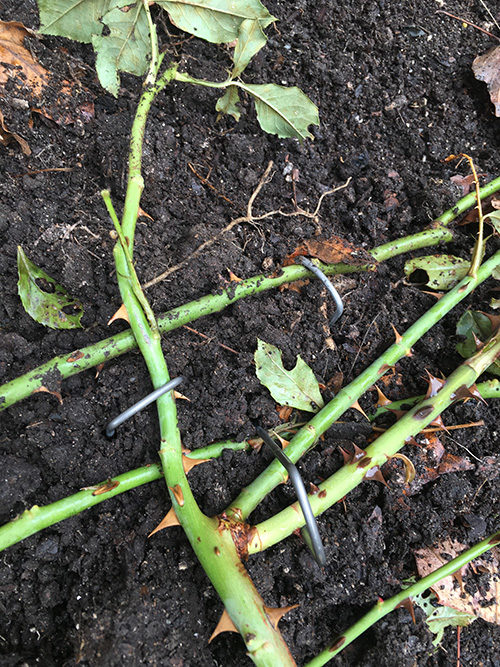 Landscape fabric pins help hold down the rose canes until the soil keeps them in place. 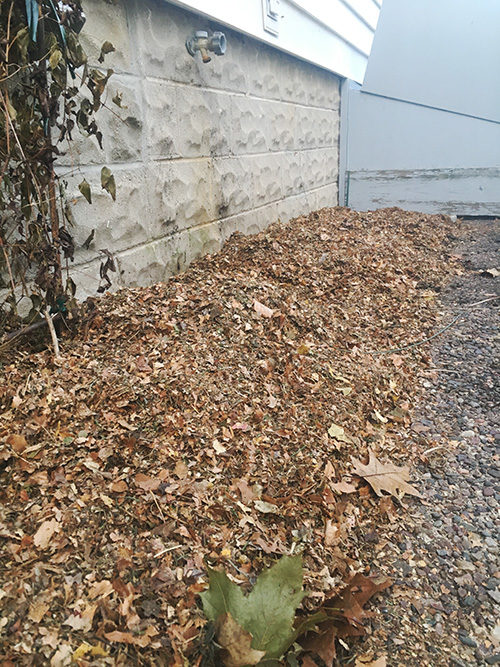 The entire area is covered in a thick layer of shredded leaf mulch after the canes are buried.

Wrapping climbing roses in burlap is recommended to protect canes from the bitter and drying winds of winter, but given the location of my climber on the center of the front of the house, I didn’t want a bit burlap art installation there. Instead, on a warm day after several frosts, when the canes were pliable, I gently bent them down and pinned them down using metal landscape fabric pins. I dug a bit of a trench to lay them in, and then mounded soil around them, after stripping all the remaining leaves off the canes. After that the entire area got a layer of shredded leaf mulch several inches thick.

If I knew for certain that we’d have one of those winters where a thick blanket of snow fell in late December and didn’t go away until March, I wouldn’t worry about protecting the new David Austin roses in the circle garden. But our relatively mild winter last year, was perhaps the most damaging I’ve ever experienced in my garden. The freeze-thaw cycle, with periods of rain, which then froze, was hell on plants, and I lost many. My goal with protecting the roots of the new roses is to provide insulation not from the cold, but from the freeze-thaw cycle.

One of the things I learned while doing some research and talking with local rose expert friends (handy to have, don’t you think?) is that those styrofoam rose cones are problematic. You have to be ready to take them off on warm days or else you make that freeze-thaw cycle even worse. 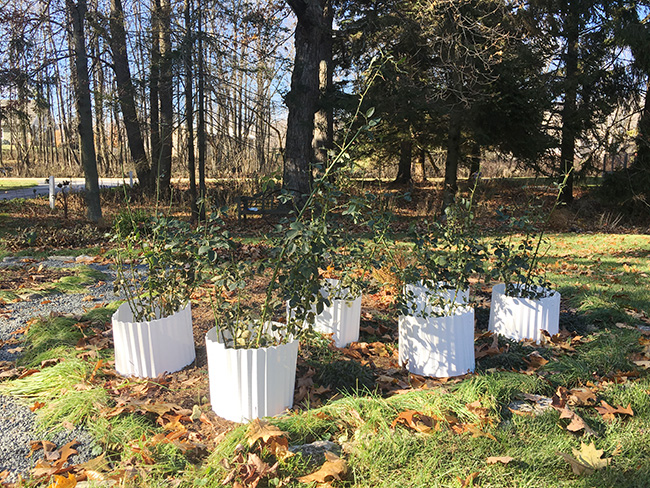 Rose collars are filled with shredded leaves to help protect against freeze-thaw damage.

But a thick layer of mulch, be it compost, pine needles or leaves, on the root zone can offer the needed protection. I’m a gadget lover, so even though I could have just made a mound or enclosed the entire area in chicken wire, I bought rose collars (that’s an affiliate link to the ones I got), that help hold all that material where it needs to be. I’ve filled them shredded leaves (after the ground is mostly frozen) and I’ll top them up with more as they settle.

Again, the idea isn’t to keep the root zone from freezing; it’s to keep it from freezing then thawing. Ideally this whole setup will freeze solid and in late winter or early spring will gradually thaw. As for the canes on these rose, I’m less concerned about them, and I will hold off on any pruning of them until the tiniest buds start to break in spring. That’s when I’ll be able to see what is dead and alive and that will be the starting point. After all dead material is removed I can do any further pruning for shape or size if I need to.

Like I said, I’m no rose expert. But that’s the thing with gardening: The information is out there; you just have to find it. And I’m feeling pretty good about this winter rose plan. Like I said … I always did love those roses.