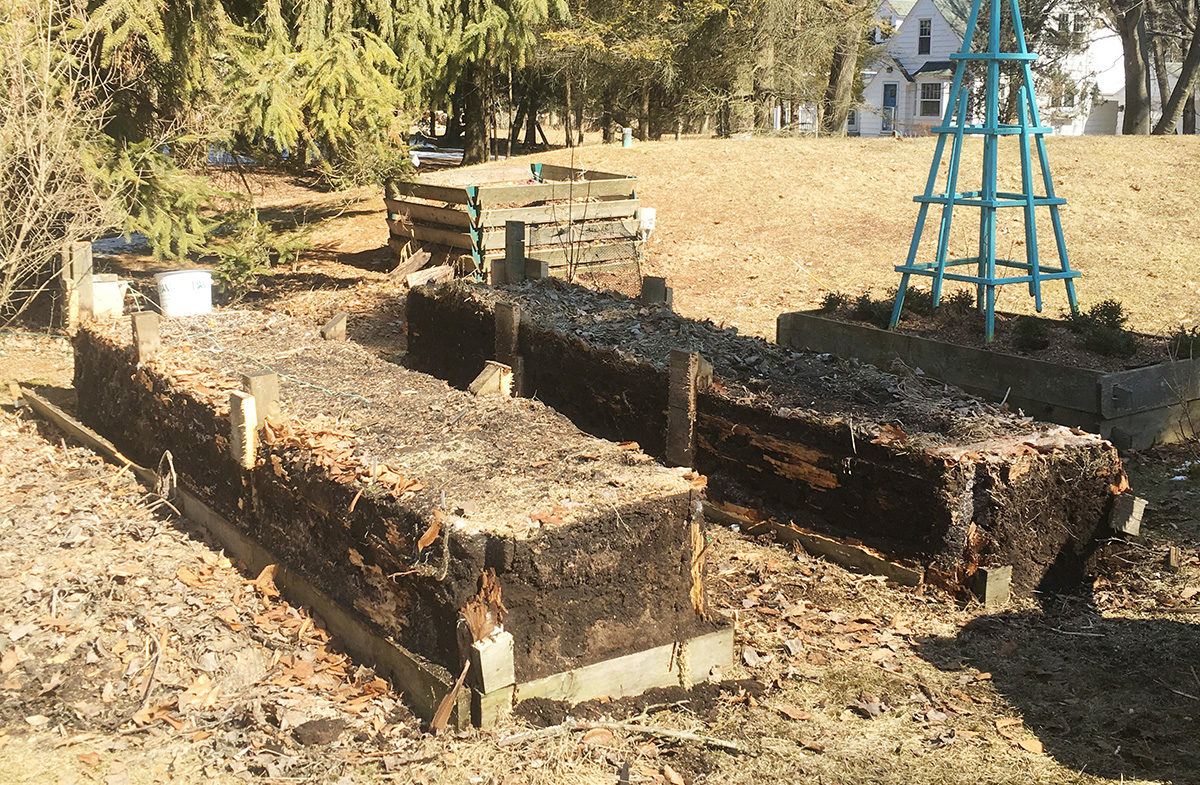 I’ve now gardened in the same place long enough that there are few new places to make a garden. Something usually has to go to make way for something new.

And so it is with our main raised vegetable garden, the removal of which makes me both very excited for what’s to come and just a little sad to see it go. 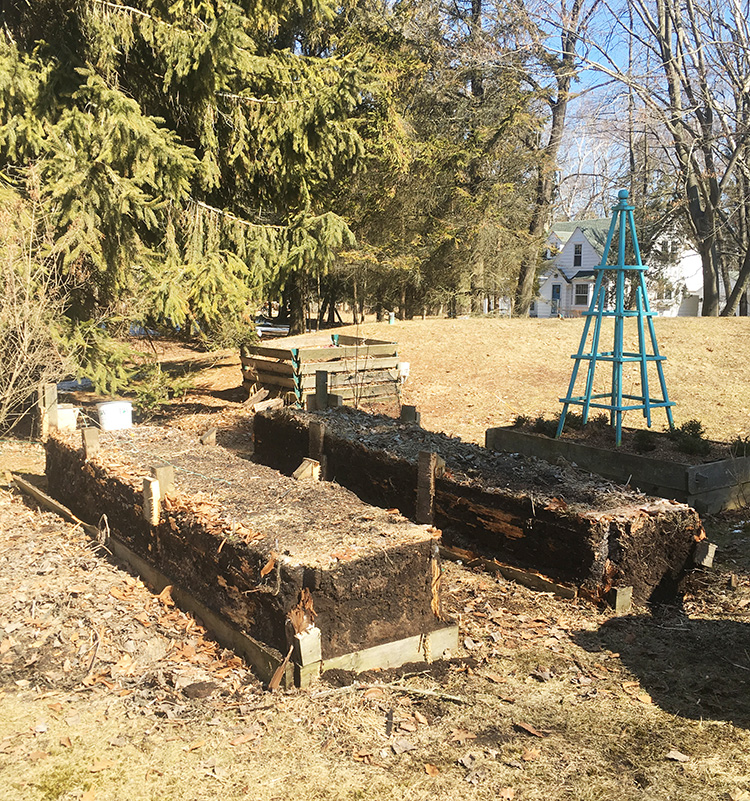 All that’s left of the vegetable garden now is two blocks of frozen soil and some of the posts that won’t budge until things thaw out.

A couple weekends ago we took a chainsaw to the vegetable garden that we outgrew long ago and which was starting to rot badly. The sides, which had been made with untreated pine, came off relatively easy. The cedar posts are still frozen into the soil, but we knocked the tops off a couple trying to get them out. What is left are two long blocks of soil that is still frozen nearly solid. The resemblance to a pair of graves is both slightly unsettling at first glance and perhaps a bit appropriate. 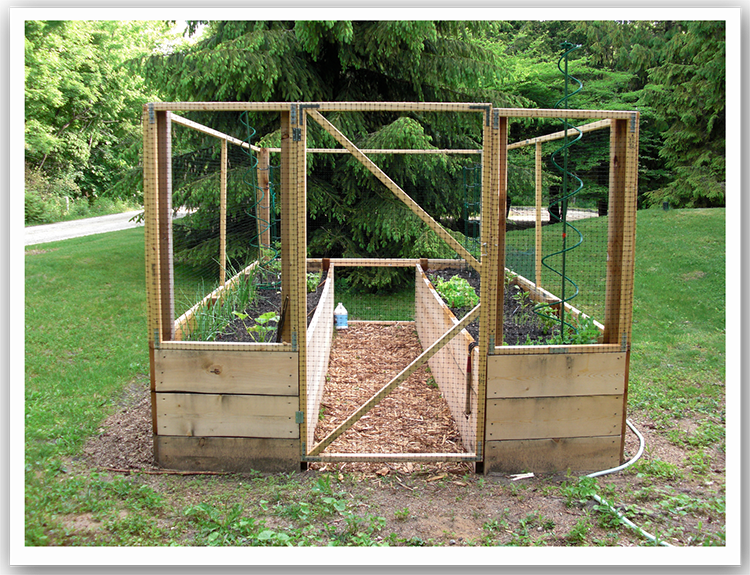 The garden looked so new and fresh back in 2009. The design incorporated walls of deer netting that kept the critters from feeding but also acted as a built in trellis for plants to climb.

Building that vegetable garden was an important moment in my life as as a gardener. Prior to that my only experience in growing vegetables was a few tomatoes in containers, although I always had herbs growing around the garden. The design was based on a garden I had seen at a vineyard in New Zealand nine years before (I actually shared a picture of it in this post). It clearly made an impression on me as I never forgot it.

I started this blog in part because of that garden. I knew it would make good blog fodder even if I had no clue who would be reading at that point. That was 2009 and the first images I shared of it were in mid-construction. 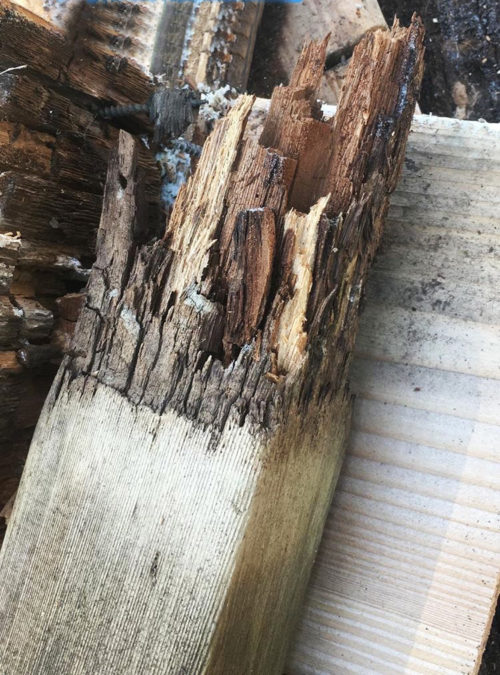 The cedar posts basically broke off at the soil level. I was shocked how much they rotted.

Cost was a consideration, so we used cedar 4×4 posts and untreated pine boards. I knew the pine would rot and figured we’d just replace them as necessary. Nine years later what we found when we took the bed apart was not what I expected. Some of the pine boards, particularly the bottom layer, were pretty rotten, but still doing their job. But the cedar posts were mostly rotted through. I’m happy we didn’t spend the money to build the entire bed out of cedar because it certainly wouldn’t have bought us any more time and it might have needed replacing sooner.

By June 2009 I had it planted with all sorts of vegetables I’d never grown before and the first vegetables I’d grown from seed. Later that summer I would discover the unique joy of eating something you grew from seed and nurtured yourself. I haven’t found a lot of other things in life that provide that kind of satisfaction.

Even though we’d lived in our small and relatively close-knit neighborhood for seven years by the time we built it, the vegetable garden had another side effect: I got to know the neighbors better.

A few years later I added another raised bed sans deer protection so I could grow more. A year after that, another raised bed followed. Since then those three beds have produced hundreds of tomatoes, oodles of beans and lots of lettuce. The first kale I ever ate in my life came from that garden (I now love it by the way) and I discovered how beautiful Swiss chard is  (pretty enough to grow even if you don’t eat it, if you ask me). It also produced approximately 40 million cucamelons, all in one year. I’m still sick of them. 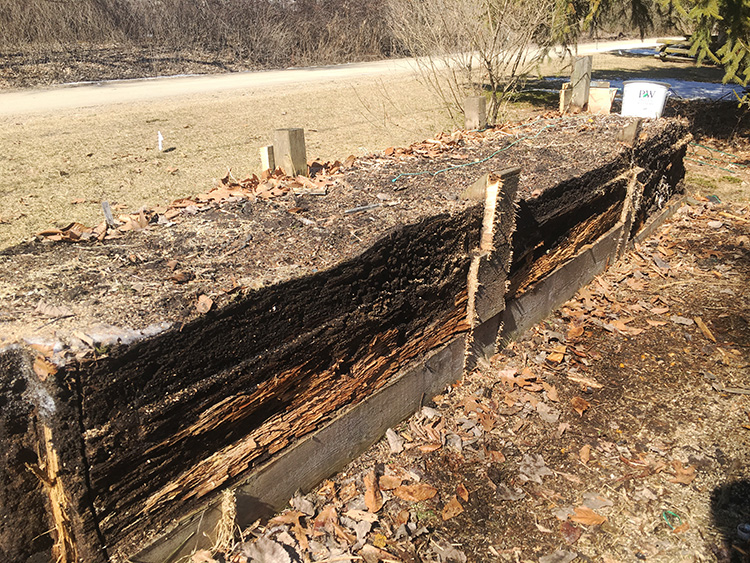 Some of the wood from the bottom boards stayed stuck to the frozen soil. After a week with no sides and a fair amount of sun the soil still resembles an ice cube more than a garden.

There is a new and improved vegetable garden on the way. Many more vegetables and hopefully some fruit will come from it. I hope to have enough abundance to learn a bit about preserving and still have plenty to share with friends, family and yes, the neighbors. I’d love to make a little stand for the neighbors to grab a few vegetables from as they drive or walk by. The key to neighborhood harmony is sharing your kale (whether they want it or not).

It’s still a little sad to see my first real vegetable garden demolished, but what a legacy it leaves behind.