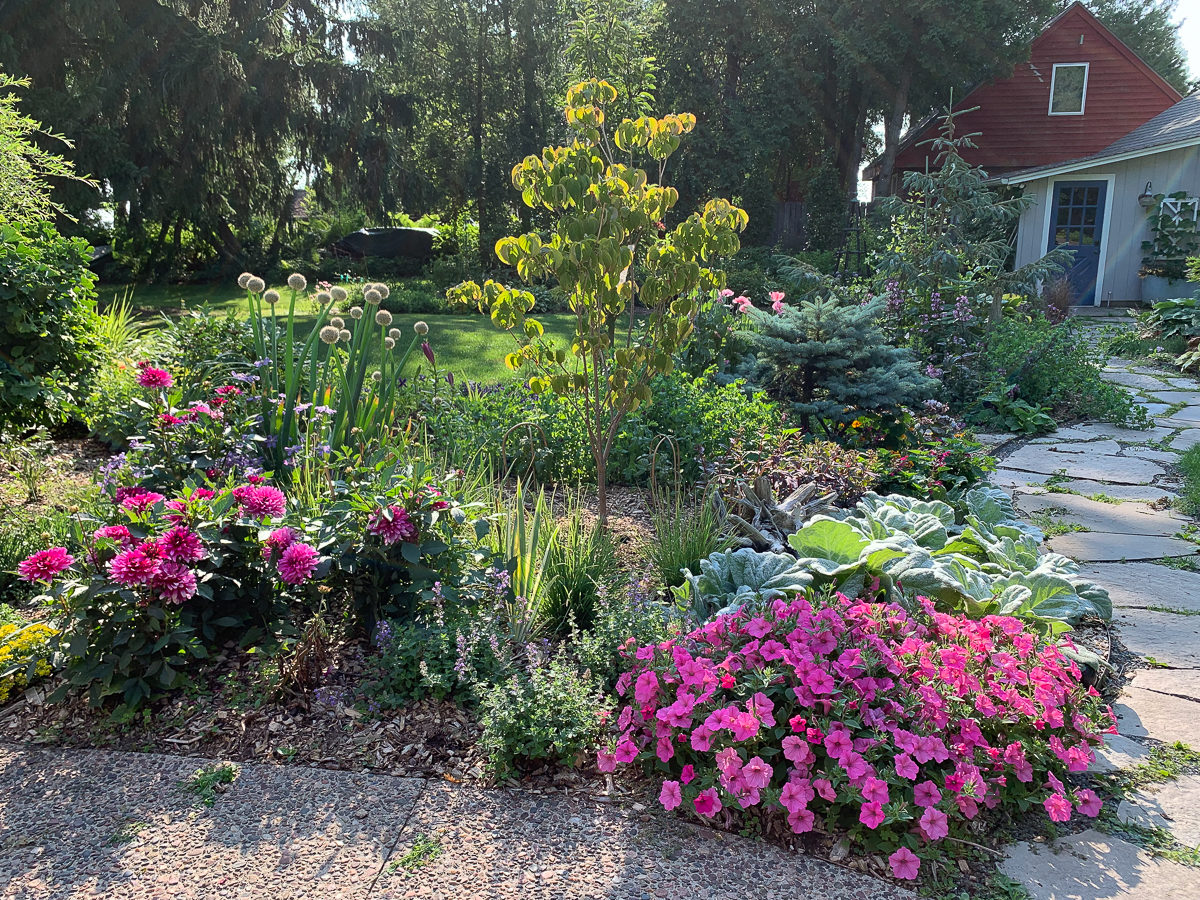 If you’ve been reading this blog for a number of years you know what’s been up. If you’re newer you may think I fell off the face of the Earth.

So this post begins with an obligatory apology. Every summer I head out in mid-July for a week or a bit more. And every year I have great intentions of scheduling a bunch of posts to run in my absence. But I never quite get around to doing more than one or two. My “drafts” folder is evidence of this. So, I apologize that it has been some time since you’ve heard from me.

I had a post ready to go right before I left and I was planning to finish it up and post it here, but it was about the general state of the garden which was a bit behind previous years. Even though those photos were taken only about two weeks ago, they are now hopelessly outdated and have no resemblance to what the garden now looks like. So I thought I’d just take a moment to catch you up on what the garden looks like right now. 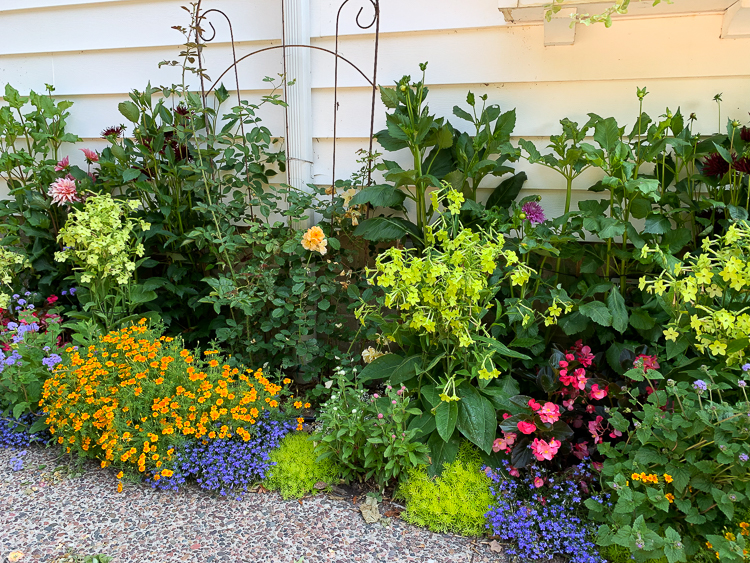 The annual border is flush with color as the big dahlias are just starting to bloom.

For as much as I complain about the weather (as I’ve mentioned before, it is a midwesterner’s birthright to complain about the weather excessively), I feel karmically required to make note of it when it’s been practically perfect. Which it has. Although it was hot while we were gone, we never suffered from the oppressive heat that traumatized much of the country and even not far from our house. Rain has been relatively steady, so there hasn’t been a lot of hand watering as is so often the case in midsummer. 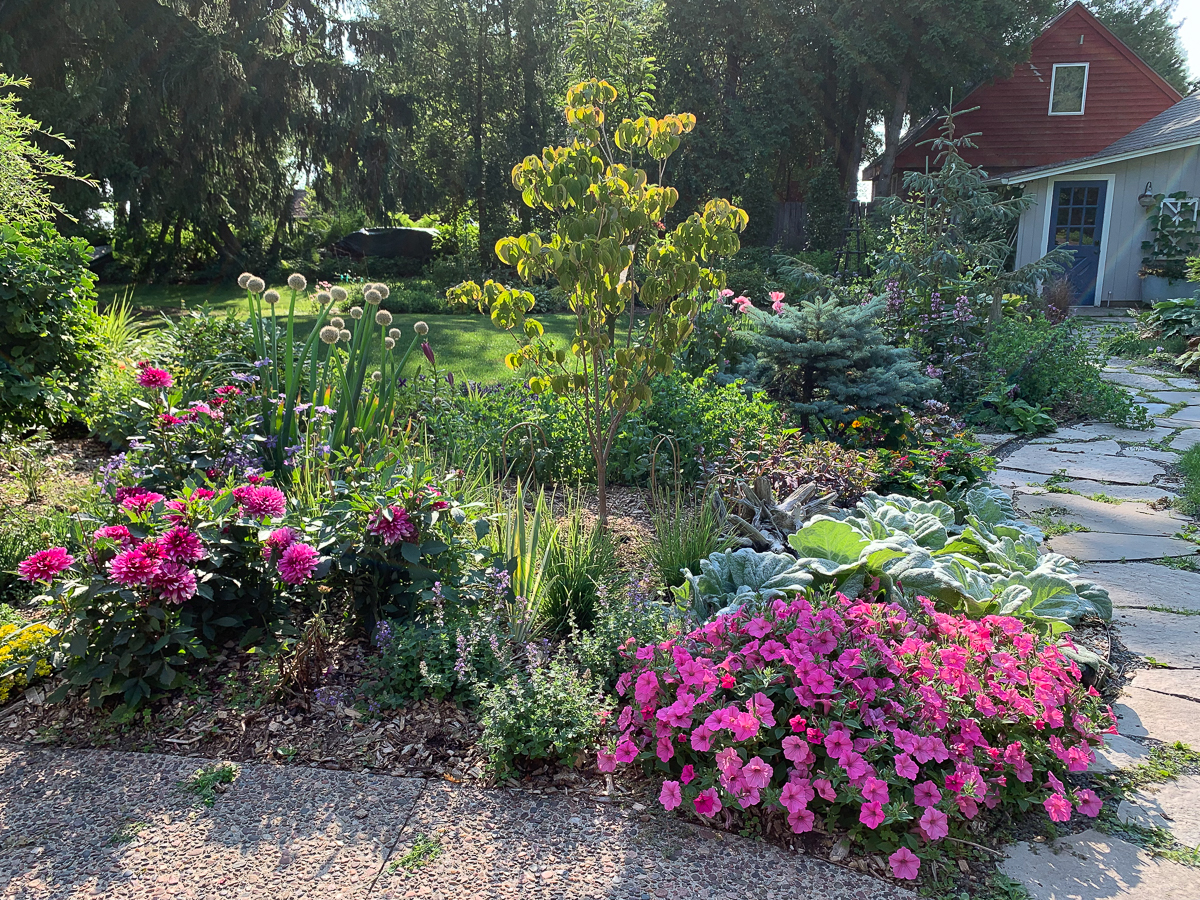 I revamped a small corner of the patio garden this spring and so far I’m very happy with how things are coming together. 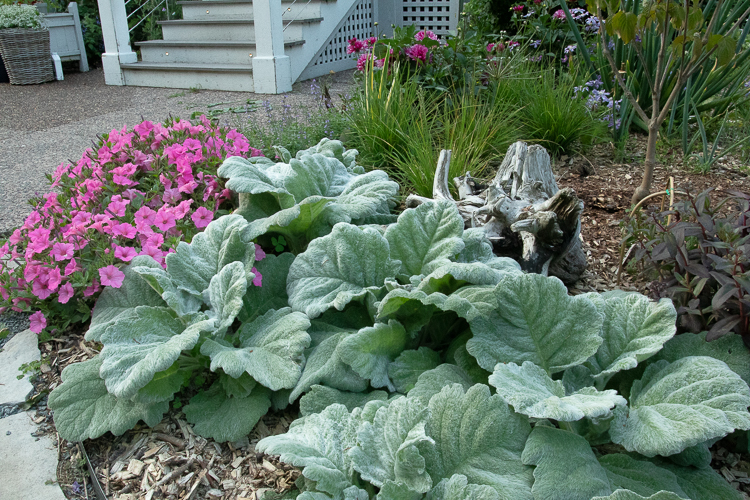 The reverse view of the above photo shows off the Salvia argentea, which I grew from seed. I’m absolutely lovely the bold and unique foliage in this area, especially where it mingles with the Supertunia Bubblegum and the chunk of driftwood kicking around in that bed.

One of the plants that was already in that bed was Allium fistulosum, which I picked up at a private plant sale (from this garden) some years ago. The redesign has really shown it off and I’m happy for that. It is growing with Clematis ‘Arabella’, which sprawls around in that bed, and Dahlia ‘Gallery Art Nouveau’. 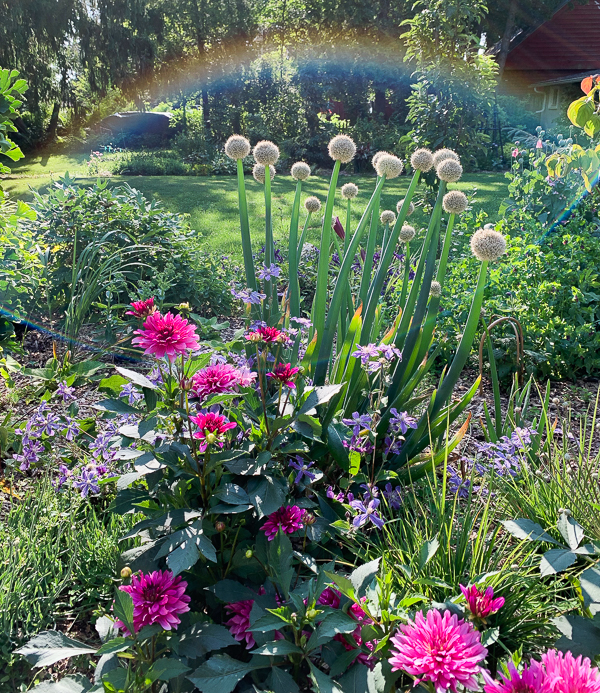 The rainbow is an odd camera effect that wasn’t planned but I sort of love it.

Other clematis in the garden are also at their finest, including ‘Prince Charles, which grows throw the big Limelight hydrangea. 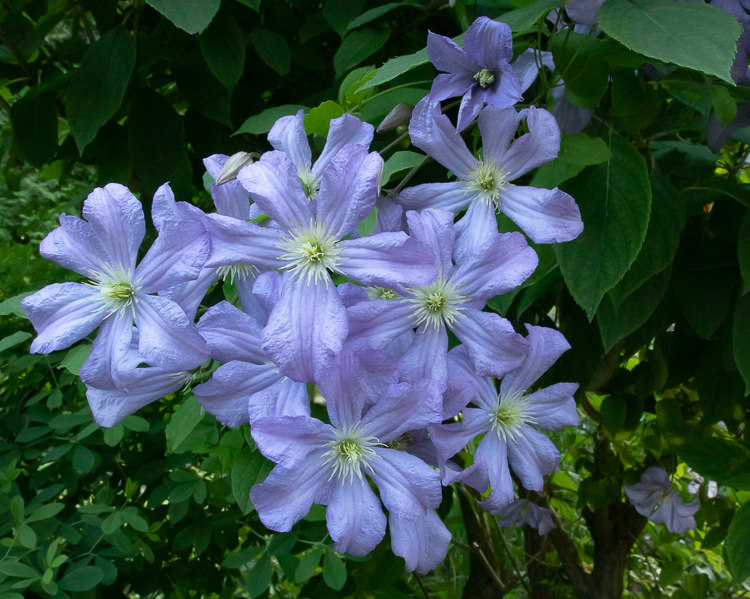 ‘Etoile violette’ is also looking as good as it ever has. I’m trying to figure how exactly how many and which clematis I have so I started a spread sheet this year in which I’m also trying to keep track of bloom times. I’m so organized I don’t recognize myself. 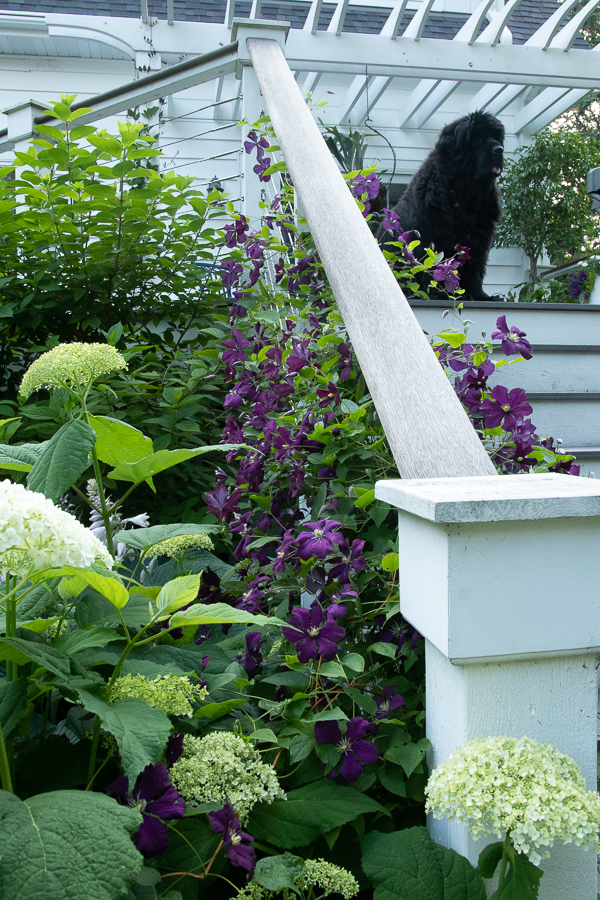 The big dahlias in the annual border are just getting going. ‘Breakout’ is new to me this year and it’s enormous and stunning. Unfortunately there was a bit of labeling mishap (on my part) and some dahlias, like that ‘Nuit d’ Ete’ to the left of ‘Breakout’ are not where they are supposed to be. 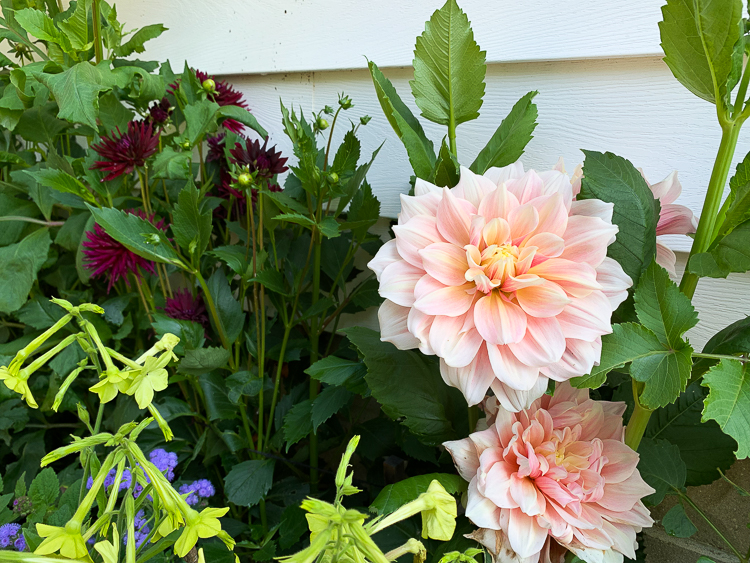 For a time I had sworn off poppies, but I got some seed from my mom’s garden after she produced beautiful single and double pink poppies last year. I have both types growing in tandem now and I alternate between which I like more. Right now I’m appreciating the simple beauty of the single flowers. 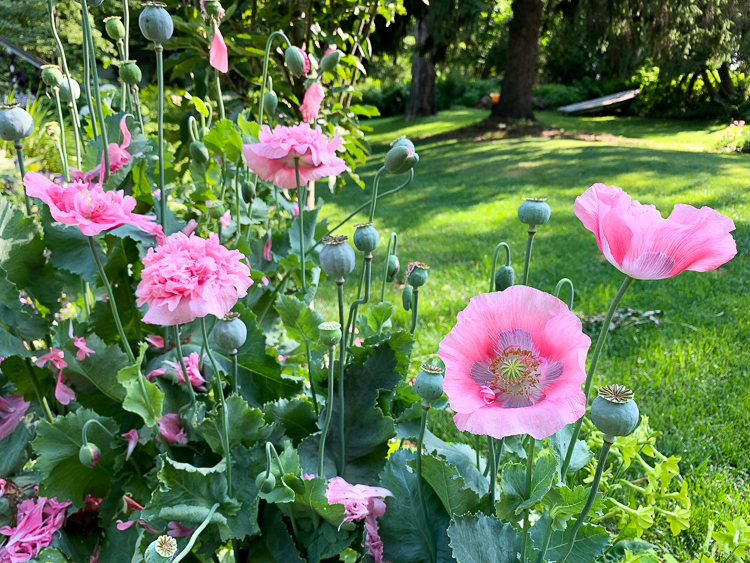 The containers (which I will show you soon; another victim of heading out of town without my computer in tow), are at that sweet spot where they look good but not haggard yet. 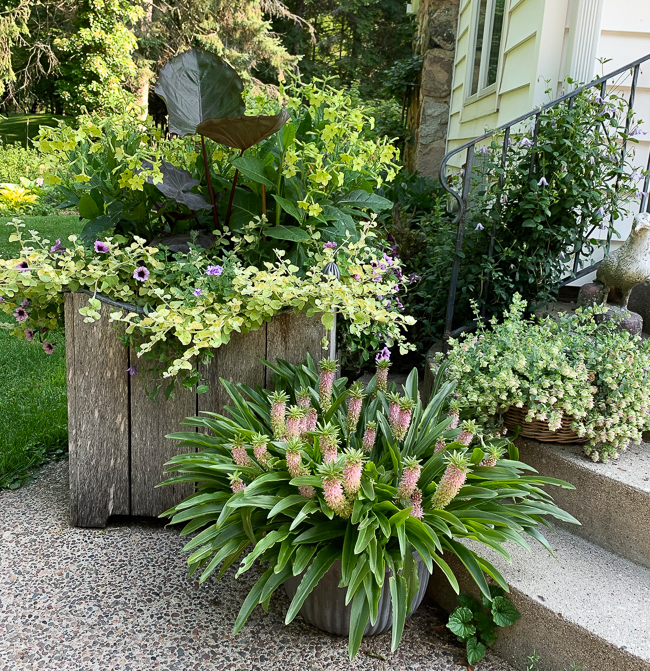 The vegetable garden is not perfect, a state I fully accept, but it’s not too shabby. 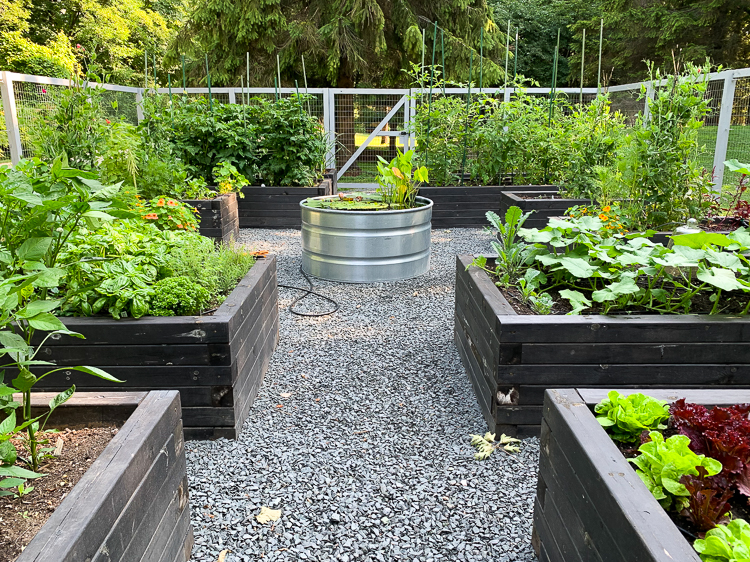 And the container pond keeps getting better. 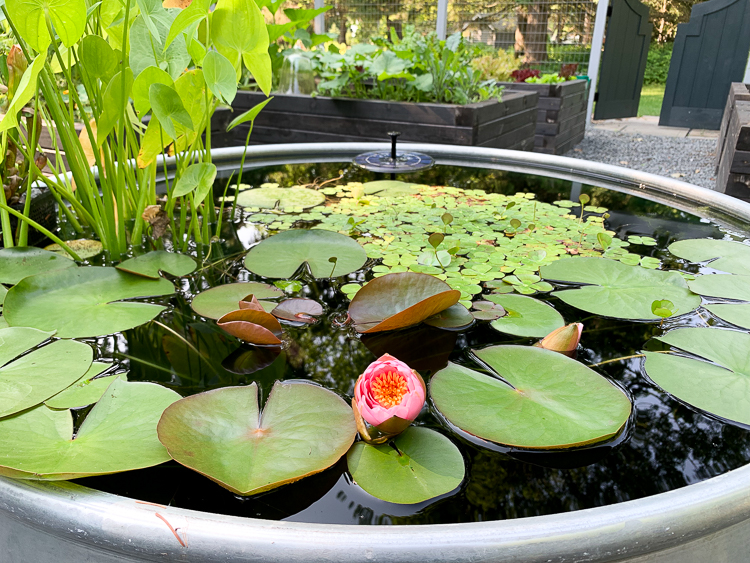 I was surprised, however, to find that squatters had moved in to the onion bed. I multisowed the onions (Charles Dowding style), meaning that I planted seedlings in clusters of five or so to increase the overall harvest, with fewer giant onions and be able to snag the occasional onion greens for salads. Apparently this mess also created a great habitat for a family of bunnies. If you want to see any more you can check out my story highlights on Instagram where they’ve become little, fuzzy, future garden destroying stars. 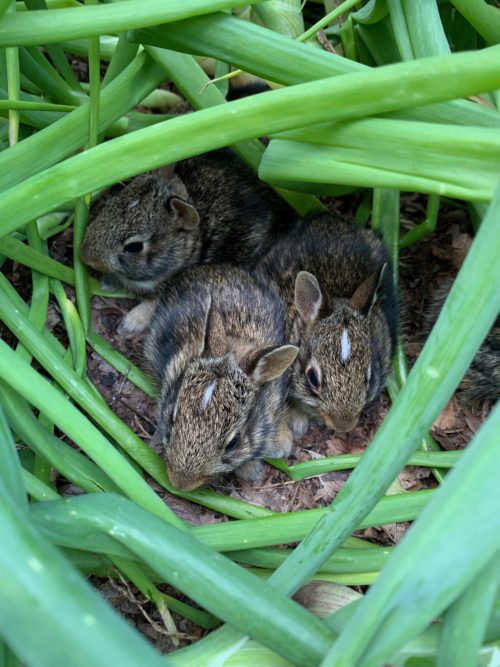 I’m thrilled that the lettuce is still looking great and tasting amazing. Salads are on the menu every day. The small romaine-type on the left is called Newham and it’s spectacular. 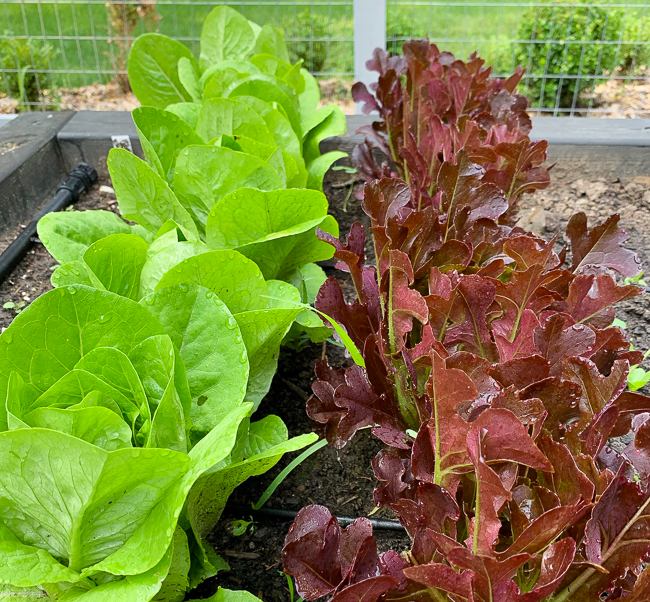 I forgot how pretty potato flowers are. I’m happy that the potatoes are looking great, but they are really hogging a lot of bed space. I’ll have to figure out a way to better contain them next year. 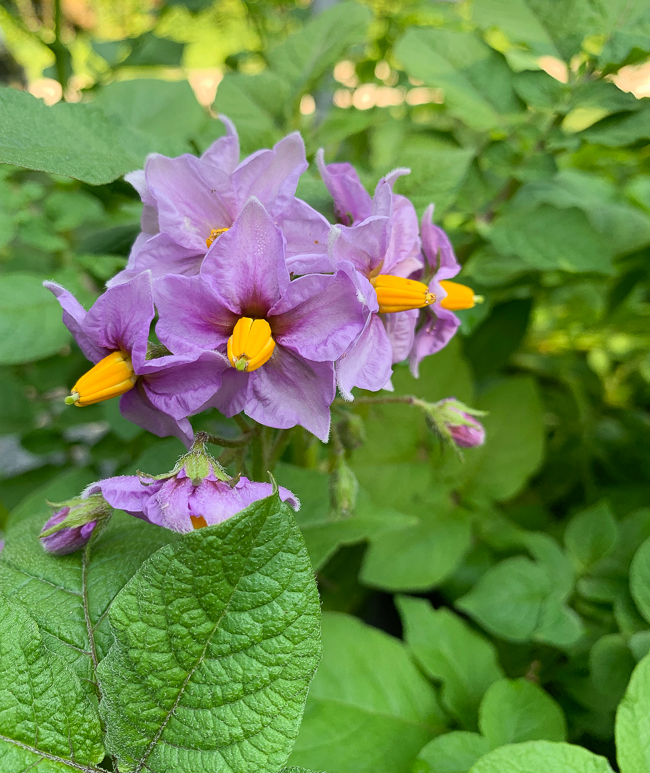 So now you’re caught up on where things are. And I’m happy to report that thanks to having things in hand before I left, I didn’t come back to the disaster that I have in the past. How are things looking in your garden?

If you’re planning on leaving your garden for the summer, here are some suggestions on how you can get it in shape to leave, how to fix the mess when you’re back and even a video on what I did this year to get organized.