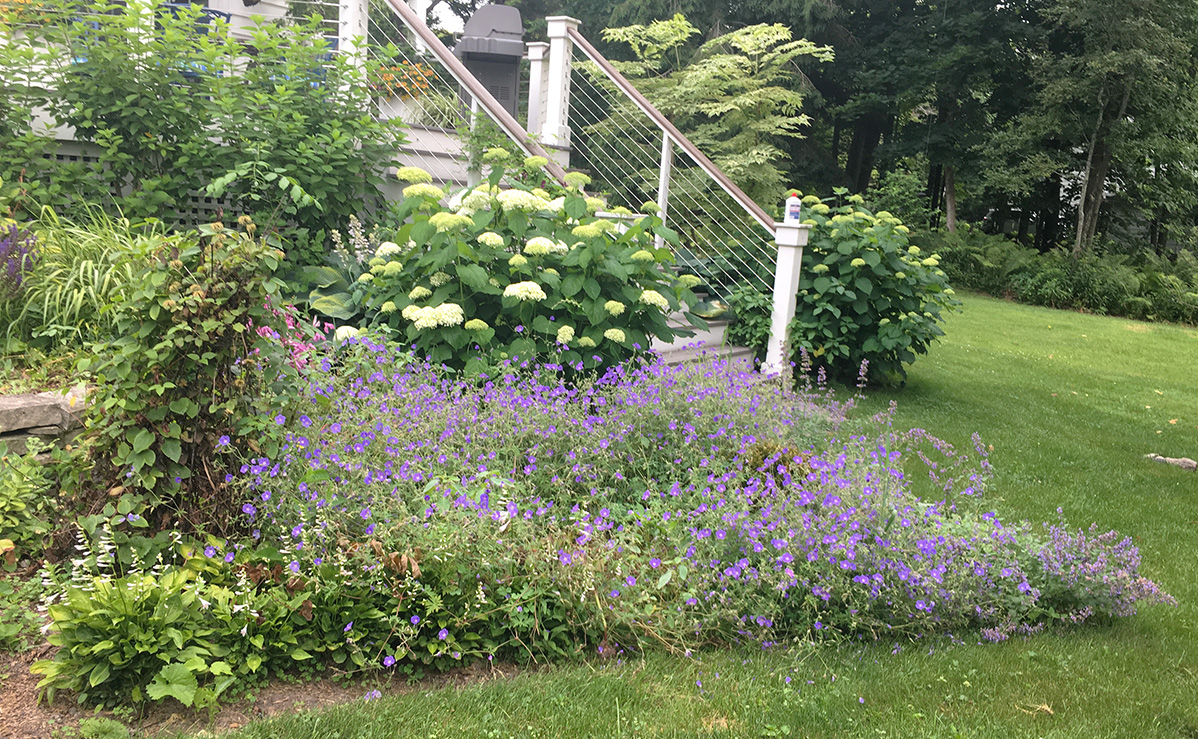 It’s that glorious time of year when most people are settled into summer and a lot of folks are heading out for vacations. I love a good summer vacation, maybe even more than those blessed  jaunts to warmer places in the middle of winter (although those certainly do more for my mental health), but it’s hard for me to leave the garden. How will it possibly fair while the gardener is gone when I know that I’m out there daily tending to it?

I have come home from a week away in the middle of summer to utter chaos in the garden more than once. In one week, all of the hard work I’ve done up to that point can be undone and it’s back to carting wheelbarrows full of stuff—weeds, overgrown perennials, etc.—away.

The bad news is that some of that is bound to happen. The good news is that if you put in a bit of work up front, your garden won’t be in a sorry state when you get home.

We have a housesitter any time we are gone so there is always someone here to water, but I don’t ask them to do anything beyond that. It’s just too much to expect someone to deadhead your garden and take care of your two enormous dogs and somewhat opinionated cat. Even if you don’t have someone stay at  your house, find someone to come to water at least a couple times while you’re gone. 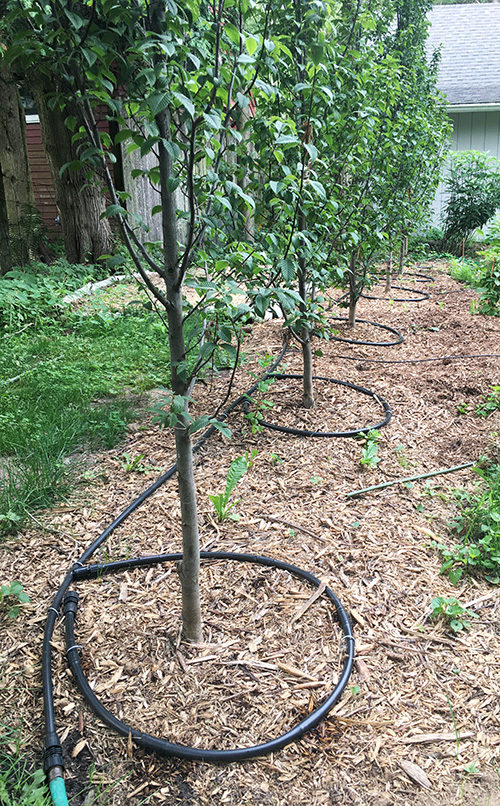 The newly planted hornbeams have been hooked up to drip tubing (which still needs to be covered by mulch).

I’ve worked hard this year to decrease the watering duties for myself and our housesitter. First off, most of my containers are large enough that they don’t need daily watering, and many can go three days or so, even in the heat of summer, without water. Smaller containers that need more frequent watering get grouped together (so they don’t get forgotten) and moved to a shadier area if possible. A week of shade won’t kill them but a week without water might. 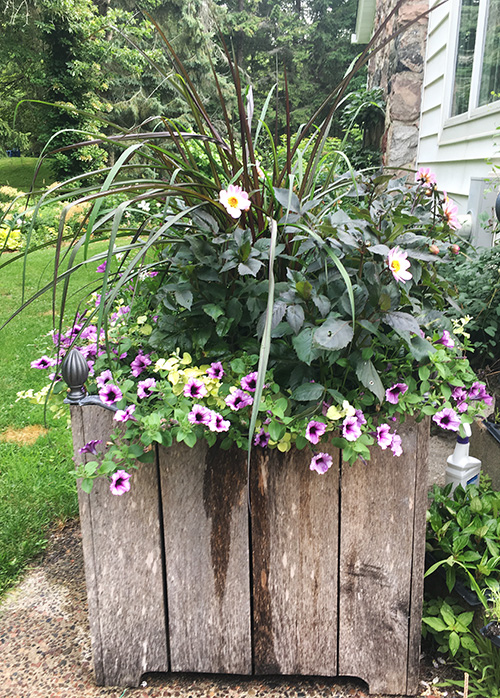 The big container by the front door is stuffed with plants but even in the high heat of summer it doesn’t need watering every day, which is a blessing for the housesitter.

Other areas of the garden are hooked up on timers. I’ll be doing a full post on this, but rigging up drip tubing to the annual bed in the front of the house where the eaves don’t allow a lot of rain to get to, then putting on a daily timer has made life so much better. It was well worth the time and expense and it’s one more area I don’t have to worry about having the housesitter water while I’m gone.

In other places, particularly where I have newly planted trees and shrubs, I have soaker hose or drip irrigation set up but a hose needs to be run to it and turned on. If I do this right before I leave, the housesitter should only have to deal with this once while we’re gone and maybe not at all if we get a good rain.

I also water the entire garden as much as possible right before I leave. Most if it is established and able to tolerate not being watered, but it’s a good layer of protection if we should happen to get a heat wave while I’m gone.

I leave very specific instructions for the housesitter on how to water containers. She’s an excellent animal caretaker but she worries more about ruining my garden than anything. So I leave a list of what needs to be watered when and how. For some containers I tell her to water them until she sees water coming out the bottom. For others I will literally give her an amount of time that she should be watering them (I’ll have to time myself doing this to figure it out). It sounds like micromanaging, but she really appreciates this level of detail and it gives her confidence that she’s doing it correctly.

So that covers watering, but there are a few other things I do before I leave. I don’t ask the housesitter to do any fertilizing while I’m gone so I always make sure to fertilize containers and annuals right before I go.

I also do some serious deadheading. In fact, I usually cut as many dahlias as I can before I go (they will make beautiful bouquets for the house or neighbors). Anything that’s flowering before I walk out the door will spend a lot of time sucking energy from the plant until I get back to deadhead it. So anything that can be deadheaded or picked is handled. 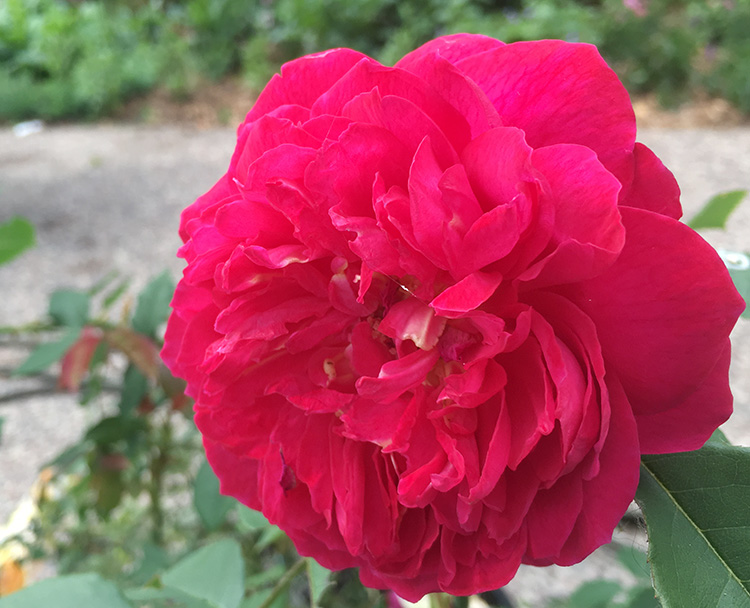 If I were going on vacation tomorrow, I’d cut this beautiful Benjamin Britten. Consider it pre-emptory deadheading.

It’s also a really good time to cut back plants. Anytime you cut back perennials that are starting to finish up their flowering, they look really shabby for about a week. Why not have that week be when you’re not looking at your garden? I usually cut back the chive hedge and any geraniums or nepeta that have sprawled out right before I leave. I make sure to give these a big drink of water and in three weeks they’ll all have nice new foliage and possibly rebloom.

This blue swath is actually three ‘Rozanne’ geraniums that have flopped but keep blooming nonetheless. I’ll wait until before I leave for a trip to cut them back hard. Within weeks there will be tight new foliage and a chance for another round of blooming. 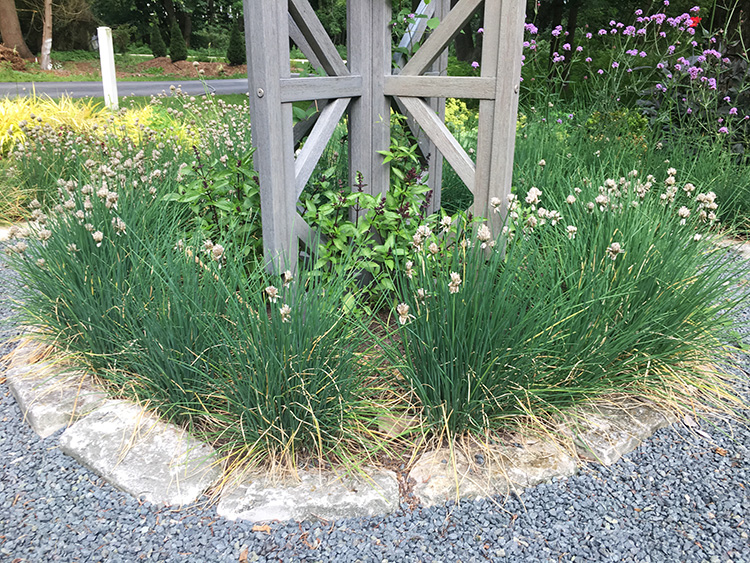 The same goes for the chive hedge. The flowers are spent and the edges are getting a little crispy. If I cut this back hard to the ground and watered well, within a couple weeks there would be fresh new chives. Alternately I could choose to cut just the edges and deadhead them, then go in later and cut back the bits that I left standing so there would always be a bit of hedge growing.

My vegetable garden hasn’t produced anything yet (and why would it, having been planted just a few weeks ago), but if yours is growing well, you should pick any vegetables that are ready right before you go so plants keep producing instead of making seeds.

Plants that need staking should definitely be supported before you go if they haven’t been already. The amount of growth a plant can put on in just a week in the middle of summer is astounding, and I’ve come home to flopped-over messes more than once.

The other must before I go on vacation is to get any plant that is still in a pot (yes, there are a few still kicking around at my house) in the ground, where they will fair far better than in a pot. If I can get a really good handle on the weeds before I go, so much the better, but I don’t consider this to be as high of a priority as everything else I’ve listed. The better your garden looks before you go, the better it’s going to look when you get back.

And the last thing I do before I walk out the door is apply deer spray. The deer know when I’m gone, I swear, even if there are still people and dogs at the house. I would feel bad asking the housesitter to run out the door waving her arms and screaming at deer to chase them from the yard as I have done on many occasions, so I do whatever I can to discourage them ahead of time.

That’s a long list and it seems overwhelming in the midst of everything else that must be done to go on vacation. But it is so nice not having to worry (too much, anyway) about what kind of state the garden will be in when I get home.

chive hedge perennials vacation
by Erin @ The Impatient Gardener
4 Comments
previous post: How to select (and find) the right plants for your garden
next post: Weekend finds