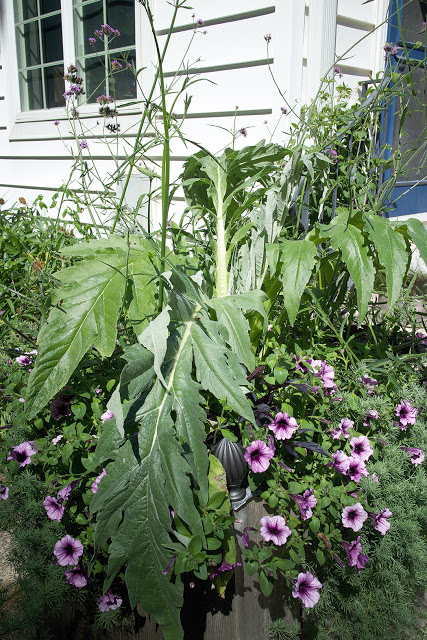 If it ever seems like your garden changes very slowly, just leave it for a couple weeks in the middle of summer and see what it looks like when you get back.

Although I do this (rarely for this long, however) every year, it never ceases to amaze me how much the garden changes in what seems like a short period of time. Of course the average temperature increased by about 15 degrees and we had several good rainfalls while I was gone, so it was optimal growing conditions.

That means that I came home to a pretty overgrown situation. Fortunately I got home with a couple hours of gardening time left in the day (laundry can wait), so I was able to deal with the most dire situations. It was garden triage time.

Weeds have grown amazingly well and lots of plants need deadheading, but that is part of more finely tuned gardening. What I needed to do was quickly assess the areas that were most in need of assistance.

The first task was watering. Because of the rain, most of the garden was well hydrated, but the beds alongside the house and the containers were in desperate need of a drink. We have great dogsitters who do their best when it comes to the garden but I want them to focus on the dogs. And Mr. Much More Patient, who made a brief stop home last week, apparently does not follow the head gardener’s very explicit watering instructions.

The cardoon was a droopy mess, as were the verbena in the large container by the front door. The cardoon will be fine, but I may have to prune out the floppy verbena. No worries, it will send up new flowers in no time.

The dahlias alongside the house were very unhappy. I gave them all big drinks and they perked up but I hate to stress a plant that should be focusing on flowering.

In other areas of the garden, the immediate danger to some plants was not related to hydration, rather smothering from other runaway growers. Garden triage is no time for delicate pruning. I just went in there and hacked away the offending parts of plants. I will go back later to neaten that up, but for now a hack will do. 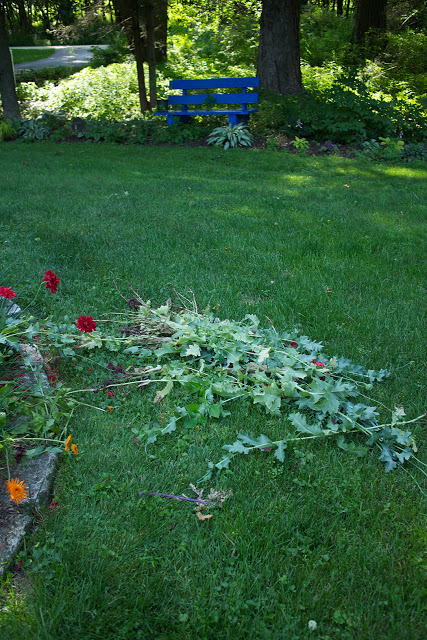 There’s nothing neat about this kind of gardening. There’s no time to grab the wheelbarrow to collect prunings and pullings. I just made piles around the garden and I’ll go back later to clean up.

In the vegetable garden, which is not receiving the bulk of my attention this year and is worse for it, it’s a little wild. I enjoyed eating the first peas (yes, I’m just now getting peas) as did my canine assistant, Rita. The parsley is insane and I hacked at that without even trying to save any of it. There was just no time for that. There’s plenty for me and the rest of the town to eat. 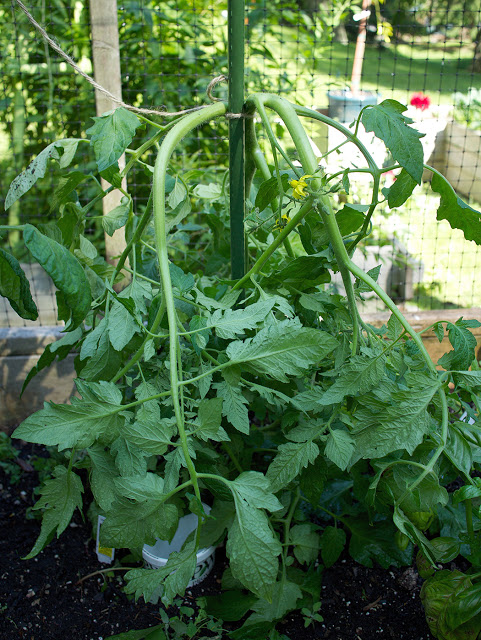 The tomatoes have serious issues. I have a single cordon system going, but most of the tomatoes grew 18 inches or more while I was gone, so the system has gone to pieces. Not sure what I’m going to do to straighten that situation out but it definitely requires some attention. 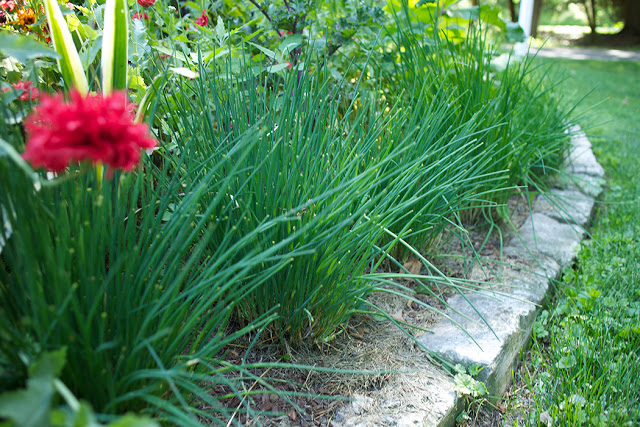 There are a lot of good things happening in the garden as well. The chive hedge, which I cut back right before I left, is already regrown and looking great. 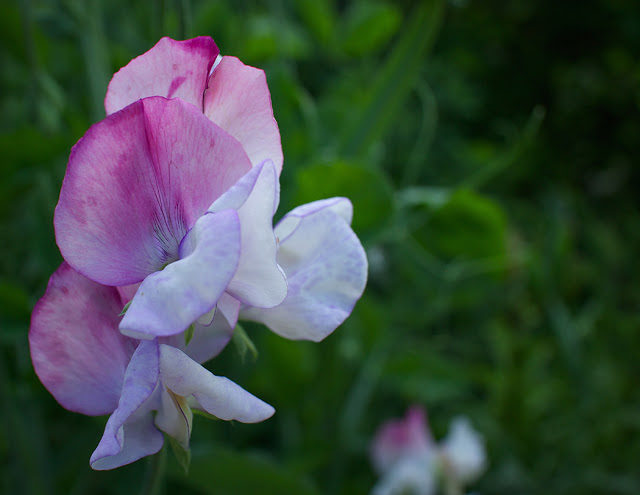 The sweet peas are starting to bloom and they are so lovely! 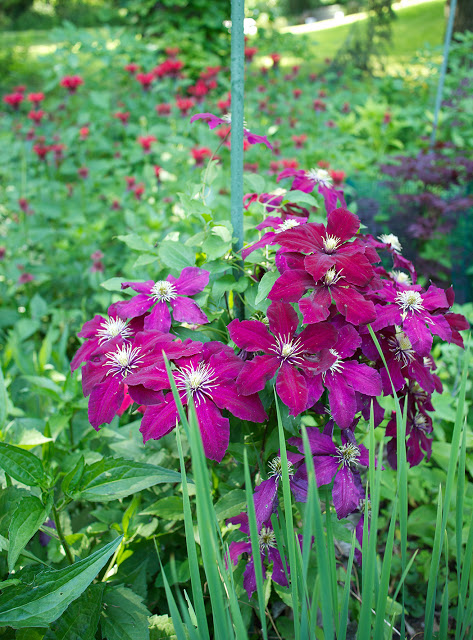 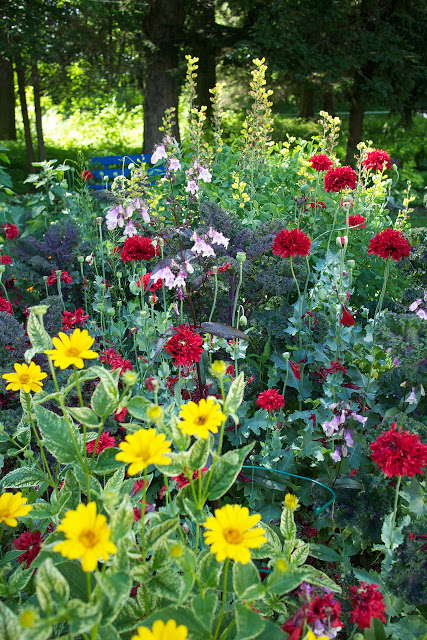 The circle garden is pretty nutty, but I think this picture shows that sometimes a riot of color can work out just fine. 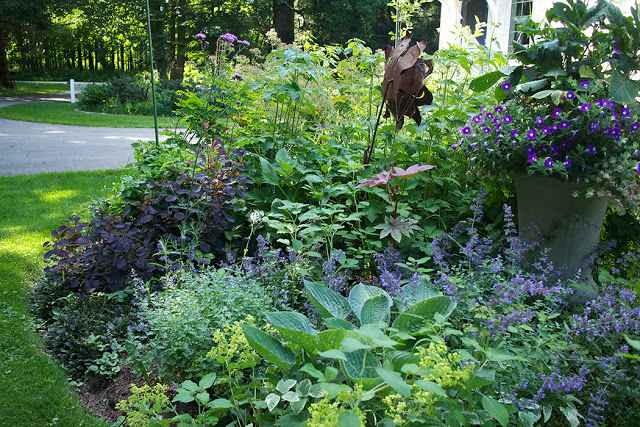 The garden will require many hours of work over the next week or so and that’s OK, I missed my time there. Being away from the garden is a good way to realize just how important those mini gardening sessions that occur when you’re drinking your coffee or a cocktail really are.