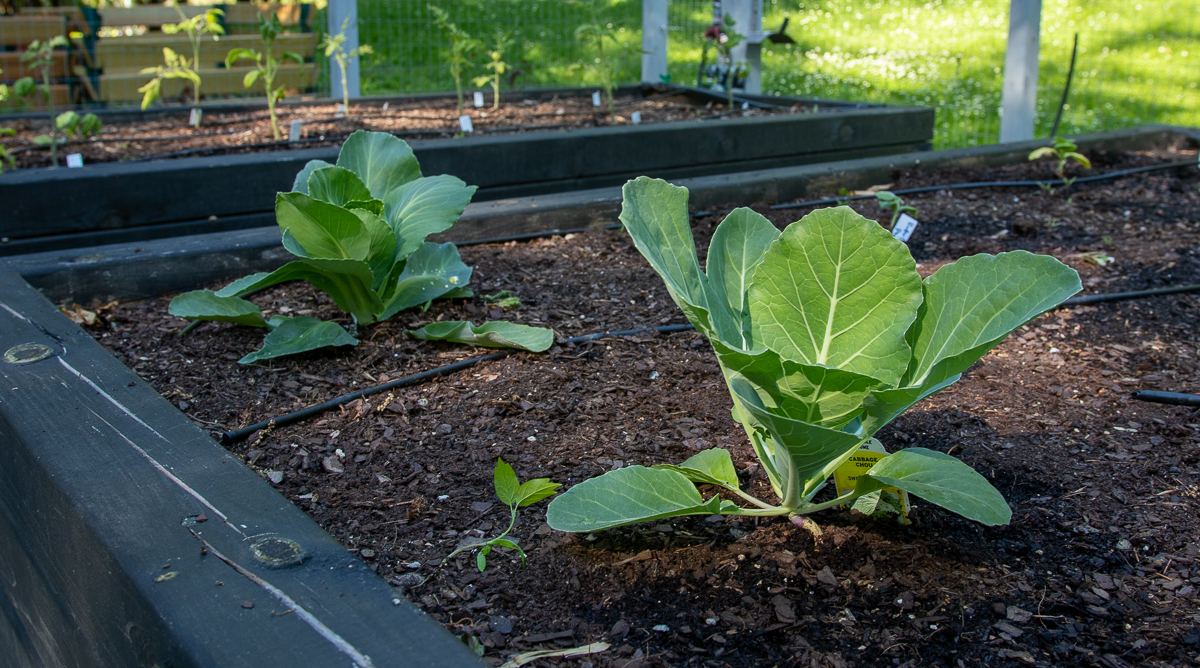 Thank you to long-time sponsor Troy-Bilt for partnering with me on this post. As usual, all words and ideas are my own.

Let’s be honest, every yard and garden has its problems, and, especially at this time a lot of people are trying to solve them. We’re spending more time at home, and noticing all the little things that aren’t quite right. Not every problem is solvable, but many can be improved, and that’s what I tried to help my friend Eric from the amazing YouTube channel and podcast Gardenfork with recently. He’s got issues and Troy-Bilt paired us for their Fence Talks program to so I can help him out with them. And I think there’s a good chance a lot of you might deal with these same issues.

How do you keep varmints (in Eric’s case bear—eek—but other, less scary critters too—out of a compost bin?

First off, never put meat or fats in a compost bin, as both of these have a tendency to attract critters that you won’t want around. Neither Eric nor I do this, but we do add a lot of kitchen scraps—vegetable trimmings, coffee grounds and the like—to our compost, and there are some tasty vittles in there for dogs, deer and, well, bears. The key is to regularly bury that stuff down in the pile so it’s not out in the open beaconing to varmints that the buffet is open.

Most of the “browns” in my compost are fallen leaves and chopping them up helping the compost break down faster. Both Eric and I have a chipper/shredder that makes the best, most fluffy, wonderful chopped up leaves that are a perfect compost addition (and good for so much more). Just dig a little hole in the compost, dump in the kitchen scraps, and put some of those great chopped-up leaves on top. 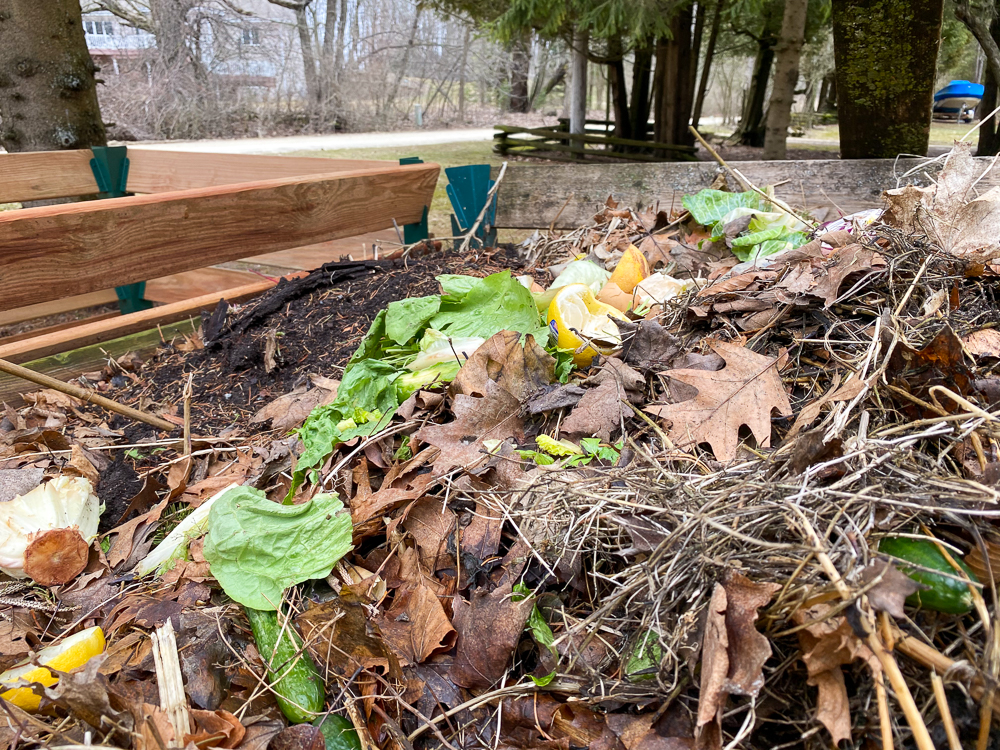 Bury kitchen scraps in your compost to keep varmints out.

Something eats holes in cabbage, cauliflower and kale.

Cabbage worms can be a bit problem. One day everything is looking fine, and the next your precious vegetables look terrible and there are some gross worms on them. The culprit is those pretty little white butterflies you see flitting around: The cabbage white butterfly is a seeking out your brassicas to lay its eggs on and when those eggs hatch, the larvae become brassica-destroying machines.

The best way to deal with them is to exclude them from the get-go. Use fine mesh netting or very thin row cover tented over brassicas to  from the moment  you plant them to make sure those butterflies can’t get near them. Brassicas don’t need pollination to produce so you can leave the mesh on continuously until harvest time.

But sometimes you can’t or don’t want to do that. In that case, your best bet is to hand-pick the little buggers. This requires a bit of hunting—the clever guys are exactly the same color as a cabbage leaf—and, in my case, some gloves (because they are gross). You can also turn to sprays. Spinosad and BT (Bacillius thuringiensis) products can help control them, but make sure to read the label instructions and only apply when pollinators aren’t present (likely later in the day). These are both organic remedies and safe for food when used according to the instructions.

These newly planted cabbages can be covered with mesh immediately after planting to prevent cabbage worm problems.

Grass will go anywhere it can. Which is funny because when you’re trying to grow new grass it can seem like it won’t grow anywhere you want it to. Seriously though, grass makes great lawn because it spreads, and it doesn’t care where that happens. Fixing the problem starts by getting rid of the problem grass that’s there and then eliminating it’s ability to grow there again. Smothering with cardboard and following up with wood chips (that chipper/shredder, which also handles branches up to 2 inches in diameter) comes in handy here too. 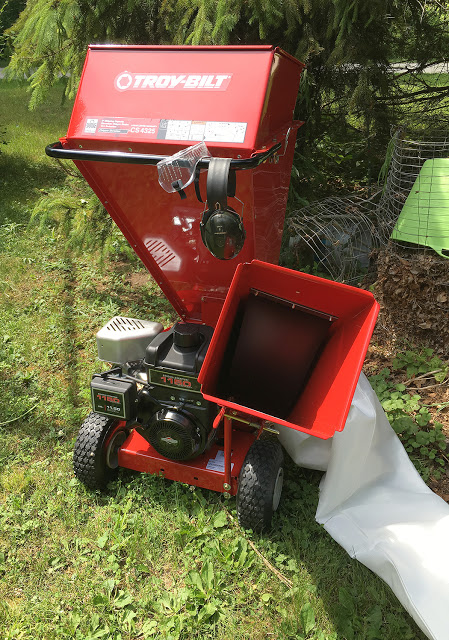 Moss is killing the grass and messing up the lawn.

Well, first off, moss doesn’t kill grass, it just grows where grass won’t, and there are usually two main reasons grass won’t grow in a particular spot: it’s too shady or the soil is compacted.

There’s only one way to make an area less shady, and that’s clearing out whatever is shading it. Sometimes you don’t have to think about cutting down an entire tree, but just thin it out a little by selectively removing branches. Around here we go to what we call our pole saw on a stick: a Troy-Bilt string trimmer with swappable accessories including the pole saw.

You can manage the compaction issue but using a core aerator on the area or, if it’s a smaller area, using a garden fork or broad fork to open up the soil. Rake some nice compost over after you’ve aerated.

Moss sometimes outcompetes turf in areas with highly acidic soil and this can be corrected with an application of hydrated lime, but only do this after a soil test confirms the pH. I have plenty of moss in my lawn (and I kind of like it but it does look a little weedy) but I have highly alkaline soil. If I blindly added lime I’d be creating an entirely new problem, and many university extensions now report that lime doesn’t really do much to control the problem anyway.

You can also use sprays like that contain iron sulfate or potassium sulfate, but they will need to be reapplied repeatedly and unless you correct the rest of the problem, you’ll just be treating the symptoms. 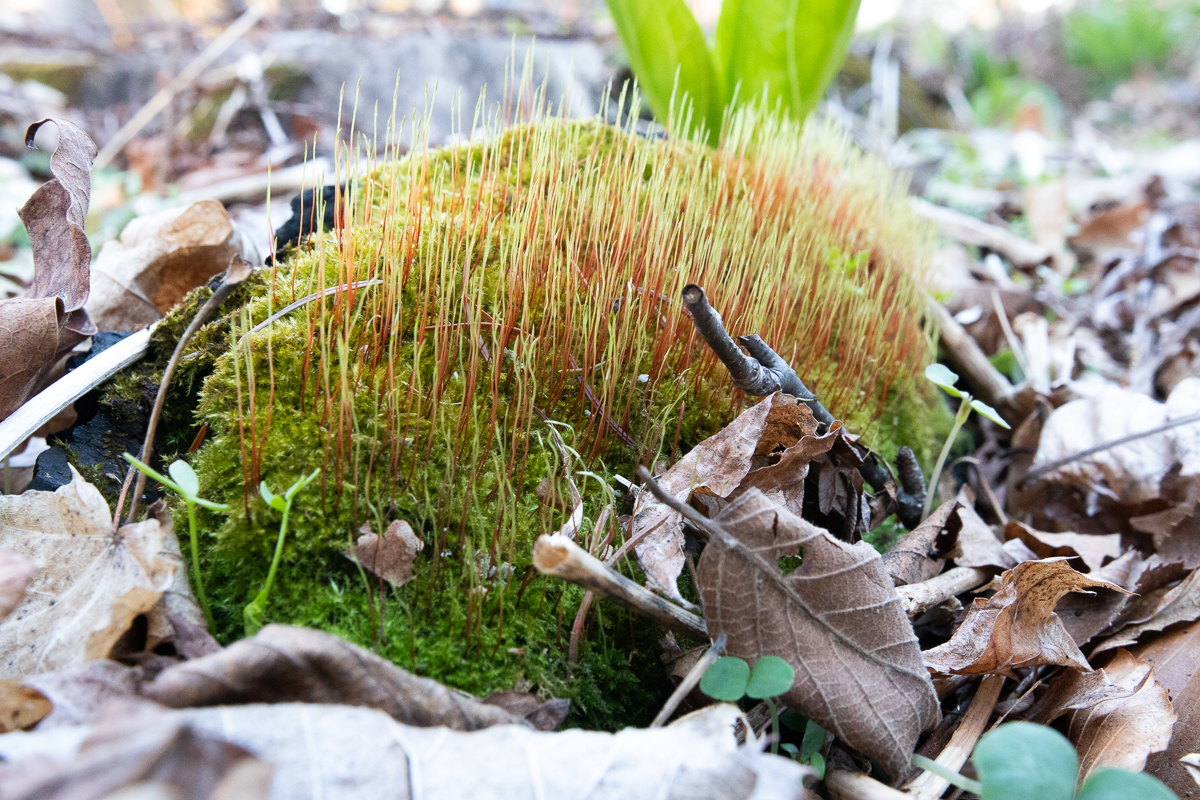 Moss is fascinating, but not everyone wants it in their lawn.

Oh, if there were only a true fix for this plague of many gardens, including mine. All we can aim to do is discourage deer from hanging out in our yards.

The best way to do that is to keep them out. This requires an 8-foot perimeter fence or two shorter fences 4 feet apart, and for a lot of us, that’s just not an option. In that case you can look to plant deer resistant plants (here are some), or apply deer repellent. Many sprays work well so long as you keep up with applying them, particularly after heavy rain, and apply them at high pressure times of year. I find that the deer are particularly hungry in early spring as plants emerge, in mid-June when fawns are starting to move around (fawns will try everything, even the things they have no business eating) and late fall and winter when other food sources become scarce.

There are about 1 million other ways that the internet will tell you works to ward off deer—Irish Spring soap, human hair, human urine, motion-activated water jets and more. None of these will hurt your garden, so go for it if you like, but in my experience most of these (not that I’ve tried them all) are unreliable at best and not easily to follow through on. 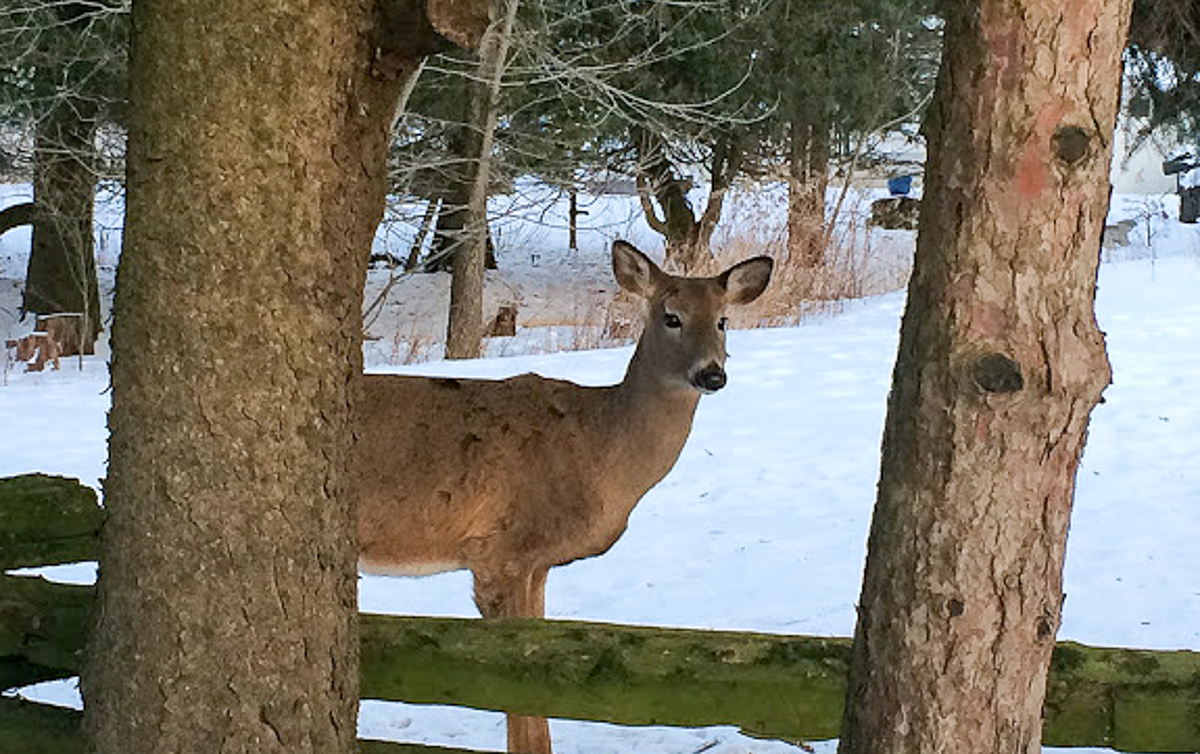 Garlic mustard weed is taking over the garden.

No one likes this answer: here in North America garlic mustard weed is an invasive species and you have to remove it. It will outcompete native species and because it is allelopathic, it emits a chemical that hinders the growth of other plants around it. So it spreads and spreads.

The best way to get rid of garlic mustard weed is to pull it out by the roots, which is not difficult if the soil is moist, bag it and throw it away, and the time to do it is before it flowers. Once it flowers it quickly sets seed and the problem is compounded.

If you just can’t get to it by then—I get it, life happens—chop it down before it flowers. You won’t be solving anything but you’ll at least be preventing some of the next generation but eliminating reseeding. A brush cutter will make short work of it. You’ll still have to come back later and pull, but at least you buy yourself some time.

By the way, garlic mustard weed is edible so you can throw it in salads or make a pesto out of it. I confess to never trying it because I hate the stuff so much I can’t bear to look at it, much less eat it. 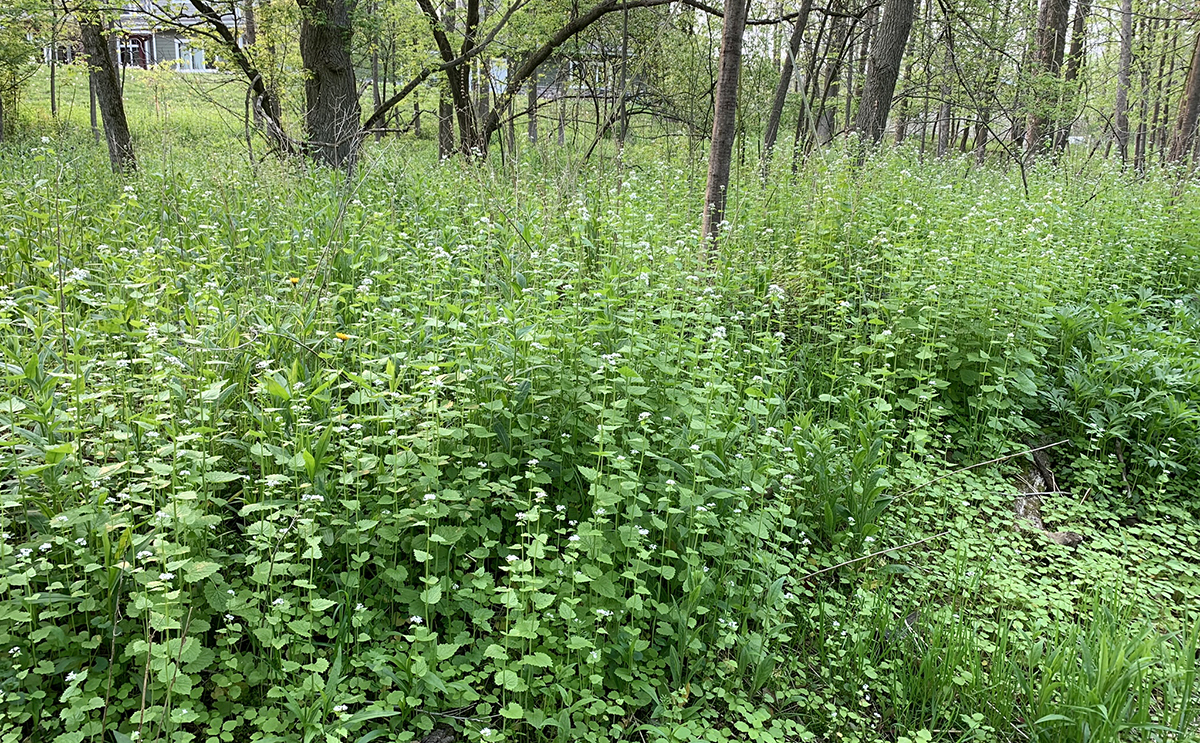 Make sure to check back here and on the GardenFork and The Impatient Gardener Youtube channels because in a few weeks we’re going to check see if my proposed fixes solve some of Eric’s problems. I’ll also be helping some of you as well, so join the conversation over on Instagram but following the #FenceTalks hashtag.

Eric and I teamed up on a couple videos about this as well. Check them out below.

bugs compost deer garden problems gardenfork troy-bilt weeds
by Erin @ The Impatient Gardener
8 Comments
previous post: All the plants for the new naturalistic garden
next post: A peace accord broken with a cute but dastardly foe