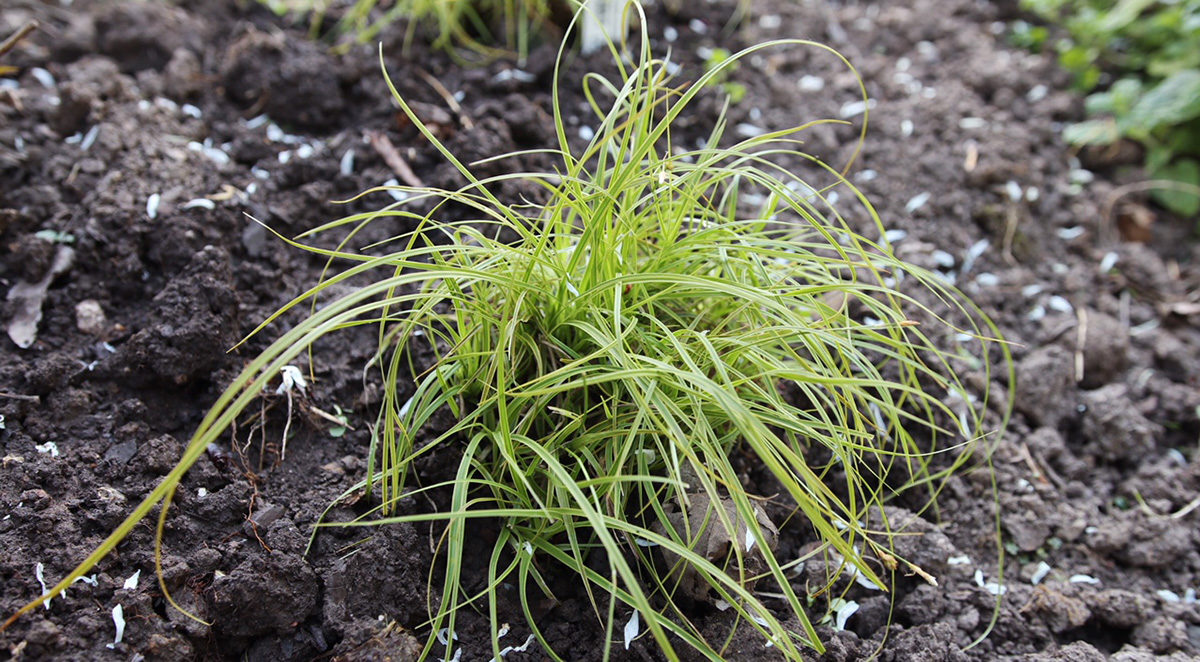 With all the plants still perched in temporary storage locations around the yard, you would think I’d gotten nothing planted over the long weekend. But I actually did get a fair amount of things planted this weekend in between working on the vegetable garden.

I’m excited about this plant. It’s small now but I hope it will thrive in it’s new sunny location.

I was very excited to plant Double Take Peach quince (Chaenomeles speciosa ‘NCCS4’), which I got a trial plant from Proven Winners. I’ve had my eye on their thornless (and fruitless) quinces for some time, but this peach rocks my world. This is MY color. I just love this color family in the garden. It’s a small plant so it will be awhile before it does much, and it will require a little babying, but I hope it thrives.

The next thing I planted comes with an admission: I don’t really like hardy hibiscus. The flowers almost seem a little gaudy to me. This is a little nuts coming from a person who plants giant dahlias that flop around (the epitome of gaudy), but they just don’t float my boat. But I also received White Pillar rose of Sharon (Hibiscus syriacus ‘Gandini van Aart’ ) from Proven Winners and there are two things I find intriguing about it. The first is the almost columnar habit of it, which I think can be very useful in a garden. And the second is the all white flowers, which I don’t find as garish as some of the more brightly colored varieties. 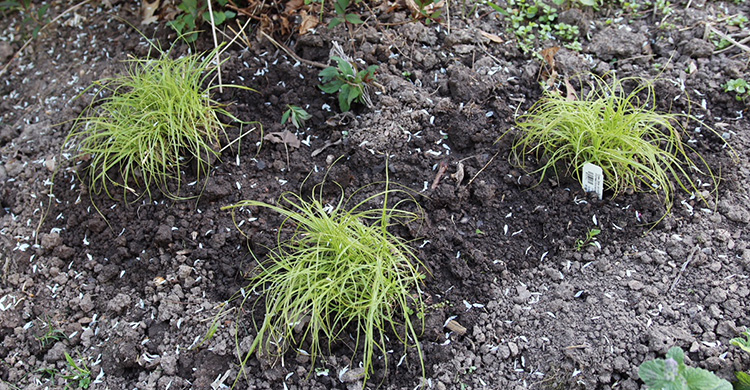 The entire garden was dusted with fallen serviceberry petals this weekend. Nature’s dandruff. But nicer.

I also plunked in three Carex caryophyllea ‘Beatlemania’, which I first fell in love with in Linda’s garden but would have fallen for anyway because that’s just a great name for a plant. I put them in a more shady spot along the path to the garage because they are low growing and so cute they should be enjoyed up close. They should probably be planted en masse as well, but for now three will have to do. 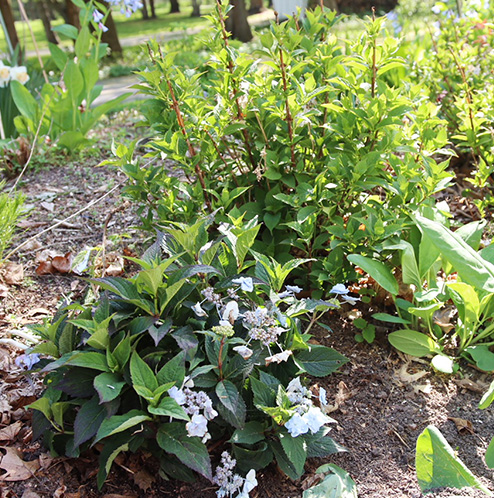 You can spot the new Tiny Tuff Stuff hydrangea from a mile away, but I assume it will soon look like its friends.

Two of the Tiny Tuff Stuff hydrangeas (Hydrangea serrata ‘MAKD’) in the planting of five didn’t look great after the winter, but one looked downright downtrodden. So I ordered a replacement for that one and moved the old hydrangea elsewhere in the garden to recover. It doesn’t exactly match the rest but I’m sure all will blend in soon. 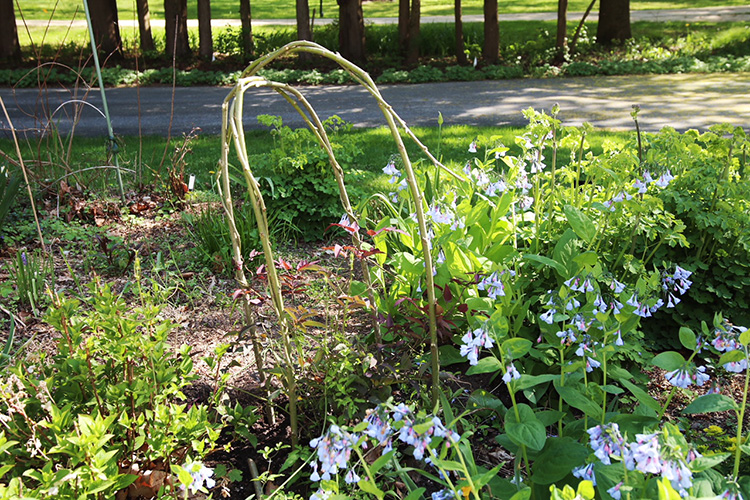 Inside that pathetic attempt at a “structure” is Clematis recta ‘Lime Close’, aka Serious Black. I cannot explain the logic of those two names to you. 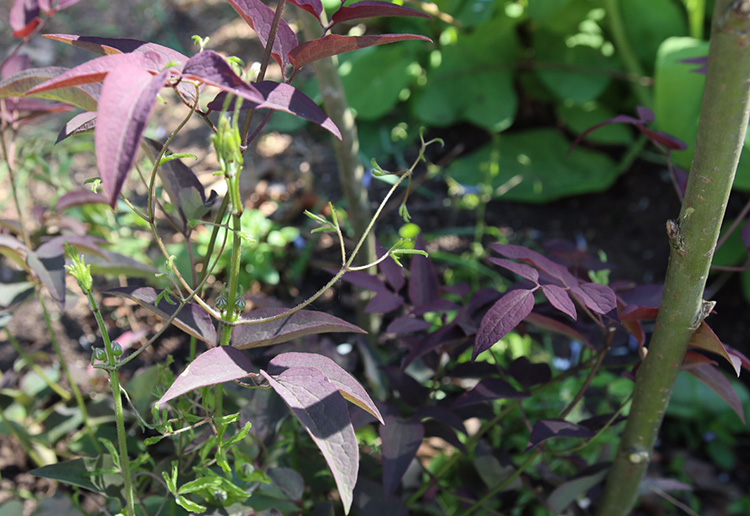 I also finally got around to planting one of the two clematis I have had sitting around for about a month. This has the most confusing pair of names ever. It’s Clematis recta ‘Lime Close’ but it is also known as Serious Black. Explain to me how any of that makes sense. Anyway, this non-vining clematis has dark purple foliage and small white flowers and gets somewhere between 4 and 6 feet tall depending on what source you consult. I’ll be containing it in some sort of structure. For now I bend a few willow branches around for some support but I’ll figure out something a little more elegant soon. I placed it next to Clematis ‘Sugar Sweet Lilac’ which I hope will sort of intertwine with it and create a lovey partnership.

Editing to add that I’ve found out a bit more about this clematis. According to Linda Beutler, author of The Plant Lover’s Guide to Clematis, it is named for the nursery where it was discovered: Lime Close. No update on the “other” name but lots of good theories in the comments. You can read more about it in Margaret Roach’s interview with Beutler  here.

I also planted up all but one of the sections in the circle garden, but I think I’ll do a post on that once I figure out that last section. I also got two containers planted, including the new urn in the middle of the garden. I think that one has potential to be quite lovely. More on those to come as well.

There’s so much left to do in the garden. I hate this time of year, when it all becomes so overwhelming that it feels like a chore because I’ve spent months yearning for it. Still, it will all get sorted in one way or another soon enough.

What did you plant this weekend?