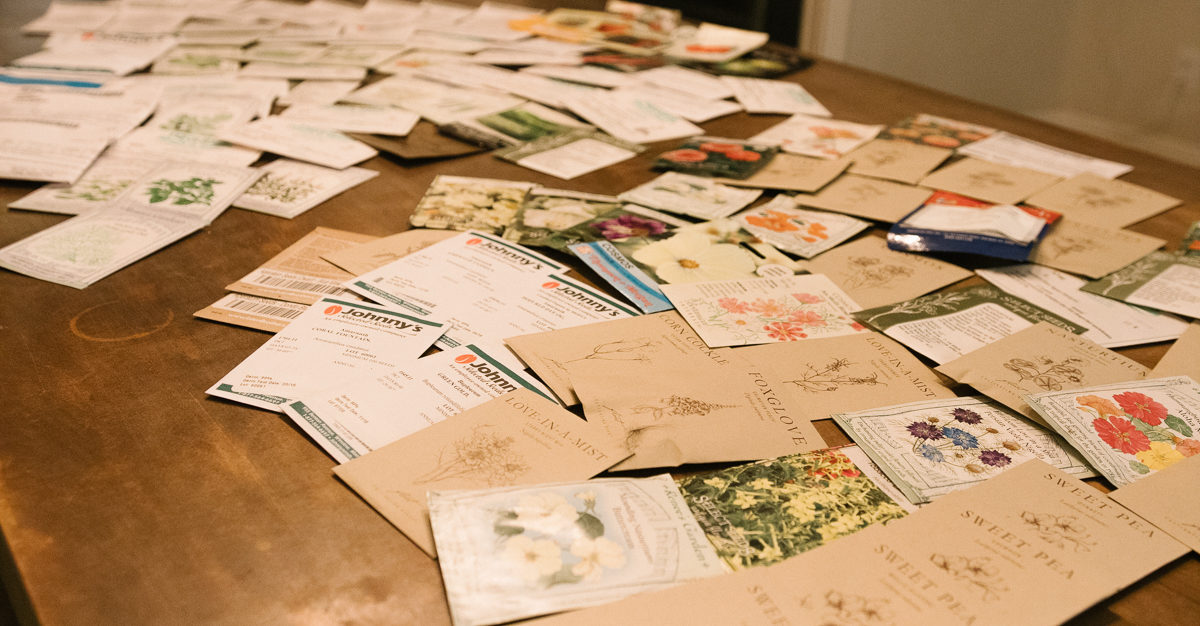 This started as a post to share what I’m growing from seed this year. What it evolved into is a sordid tale of seed hoarding, a gardener so traumatized by a never-ending winter that she completely overestimated her ability to grow so many plants and, in the end, a way to justify it all.

As I’ve said before, I find great satisfaction in growing plants from seed for so many reasons, but one of the primary reasons I do it (in particular why I grow lots of flowers from seed) is because it is very cost effective. I can grow a garden full of plants for pennies. But the cost savings decline when you start buying seeds with reckless abandon.

These are some of the seeds I plan to grow this year. 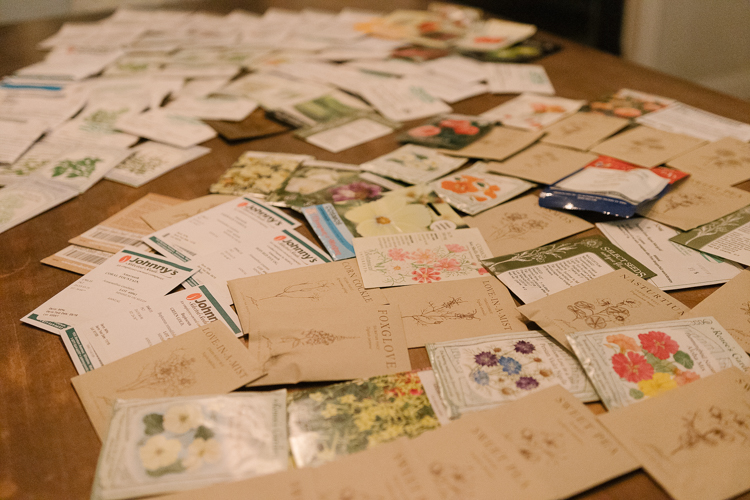 This is just a portion of the seeds I plan to grow from this year.

Yes, some. More are on the way.

I showed you where and how I start seeds, and when they are ready to move on and be hardened off, they move out to a temporary greenhouse when it’s warm enough, but there is no way I can start that many seeds indoors. I attempted to pare down the pile by deciding what I didn’t really need to grow. As you might imagine, given that I obviously do not think clearly when it comes to plants, this was not successful. I want to grow it all. But what I was able to do was prioritize seeds that need to be started inside.

I have a lot more success with some flowers by direct sowing them. Zinnia, cosmos, poppies and nigella are among them. In fact, I have never successfully started zinnias indoors before, although plenty of people do with great success. I also direct sow several vegetables: peas, beans, lettuce, cucumbers, chard, beets and sometimes kale. It’s sometimes nice to plant seedlings because it’s easier to judge spacing, but skipping that step is one way to lessen the inside seed-sowing burden. 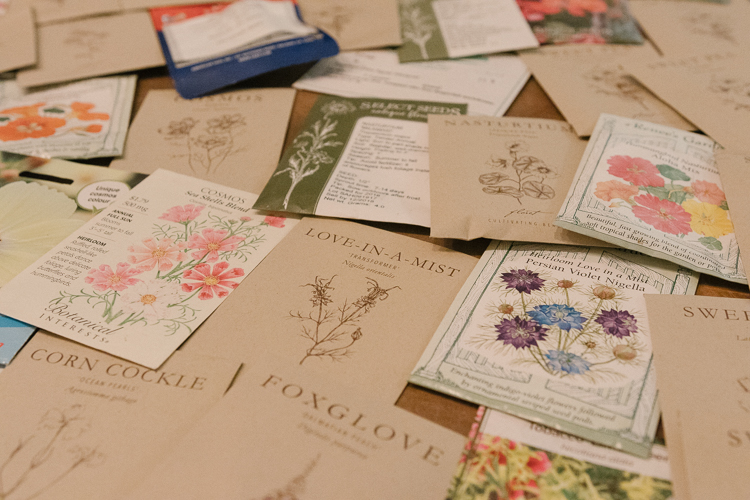 I love growing flowers from seed because it’s an inexpensive way to fill up the garden and I never feel guilty cutting bouquets.

Several readers have also suggested I try winter sowing, and I did for the first time last year with mixed results. If you’re not familiar with winter sowing, check out this article on how to do it. Since this is only my second year trying it, I don’t feel qualified to offer instruction quite yet. The one plant it worked very well on last year was verbena bonariensis, which requires a period of cold to germinate. So I snagged a milk jug and sowed that last week. Another packet moved on.

Since I’m not willing to eliminate varieties, I’ve decided to just grow fewer of plants of each. In the past I’ve grown a lot of backups, only to have every seed germinate and thrive. Two years ago I grew four of every tomato and ended up having to offer all my extras in a local Facebook rummage site and ended up with a stampede of people showing up at my house. This year I will only grow one or two plants of each tomato variety. If something fails, well, I’ve got more tomatoes than I can fit anyway.

Speaking of tomatoes, I invested heavily in dwarf tomatoes this year. These are full-size tomatoes that grow on small plants. Craig LeHoullier has been leading the “dwarf tomato project” for several years, trying to rediscover these varieties, preserve and identify some of the best. I found many of the tomatoes from that project at Victory Seeds. 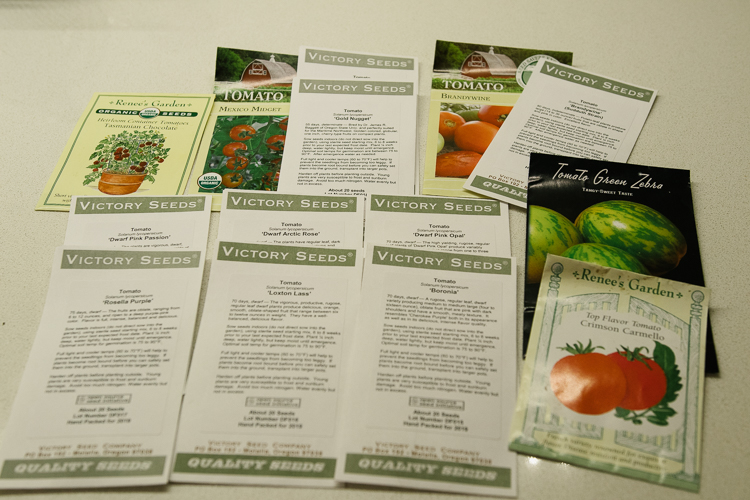 Some of the tomatoes I’ll be growing this year.

I’m often asked where I order seeds from and the answer is: A lot of places. I’ve found that most seed providers that have their own “store” (be it brick and mortar or online) are pretty good. If they put out a printed catalog they are almost always good (fly by night operations don’t bother with catalogs). I advise people to stay away from sellers on amazon, eBay and other faceless seed purveyors. If the price seems too good to be true, it probably is. And there’s nothing wrong with picking up seeds at the store, but do check that they are packed for this year, because you don’t know how seed might have been stored in the off season. I just find that there is far more selection available from mail order seed companies. 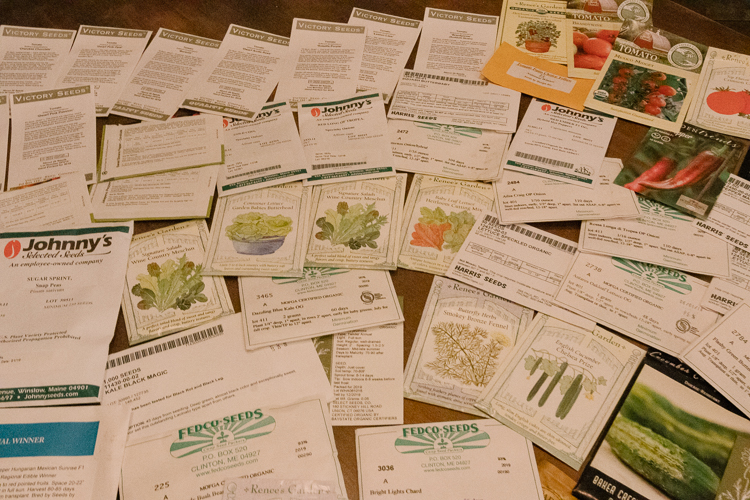 Vegetable and herb seeds. My favorite vegetable to grow is lettuce so I have tons of varieties.

This year, in addition to seeds I’ve saved from my own garden, I ordered from (or I’m growing seeds purchased in the past from):

And here’s a list of everything I’m growing. I was going to put in specific varieties but this would get very long. If you’re really interested in something, leave a comment and I’ll look it up.

Flowers to start inside:

Vegetables and herbs for direct sowing:

Vegetables and herbs to start indoors:

And of course there are other things I pick up as plants, including some herbs, an occasional squash and whatever else strikes my fancy.

It’s all very ambitious, I know. I will admit that by May, when it’s too early to plant many seedlings out, but they are all big enough to need a fair amount of attention, I tire of the whole seed-starting process. I usually swear that the next year I won’t grow so much from seed. But gardeners’ memories are short and for most of the time I’m starting seeds, I take untold joy in the process. So keep on growing.

flowers herbs seed starting seeds tomatoes
by Erin @ The Impatient Gardener
8 Comments
previous post: How to grow hundreds of plants from seed
next post: The blight that may be threatening your boxwoods