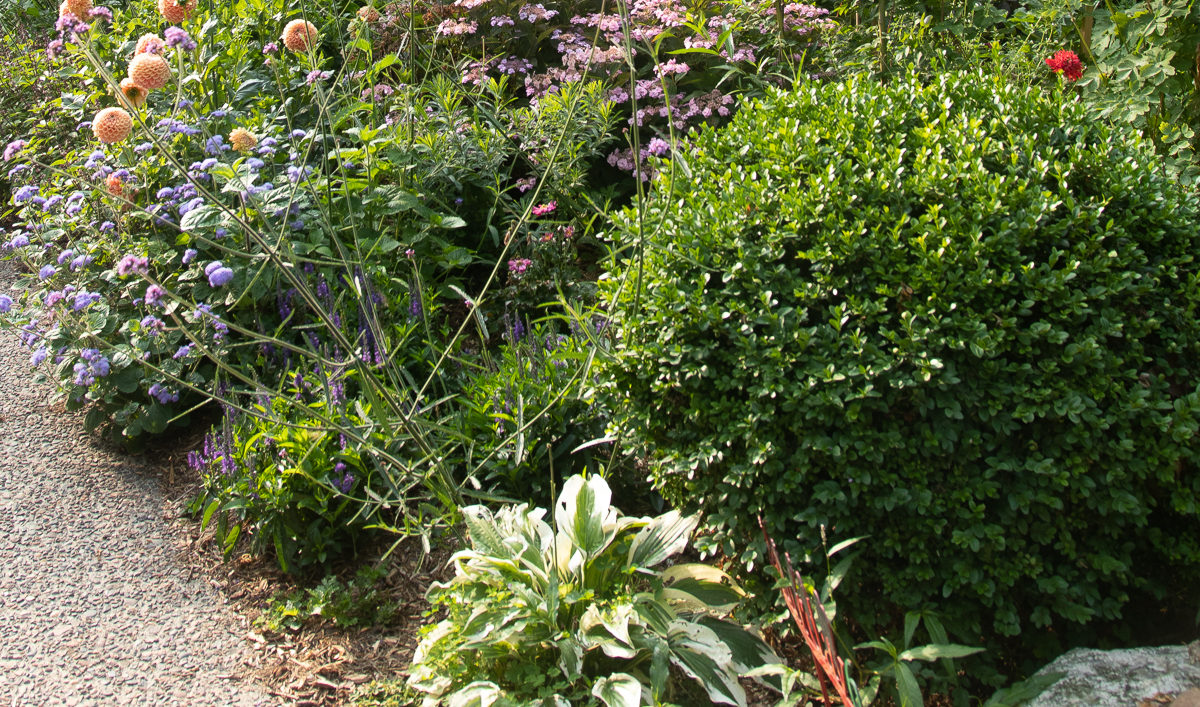 UPDATE, April 2021: I’m sad to report that boxwood blight has been positively identified via plant samples I sent to the plant disease diagnostic lab in my garden. The five boxwoods in the first photo of this post are infected and will be removed. At this time I have not found signs of the fungus on other boxwoods in my yard and I certainly hope I won’t have to come back and update this post to say something different. Be vigilant, be careful where you buy your boxwoods from and look for blight-resistant varieties. –TIG

Because I watch a lot of British gardening television programming, I’ve been thinking about boxwood blight for a long time. The disease has been a problem across the pond for many years and recently has taken out beautiful old boxwood hedges in some of my favorite television gardens.

And I knew there was a good chance it would soon be my problem. We’ve been warned about it here for awhile and last July it was positively identified in a Wisconsin nursery. And that means it’s officially my concern now.

I don’t have miles of boxwood hedges in my garden, but it’s a plant I quite like and those I do have offer important structure in my garden. I would be sad to lose them and even sadder to have to eliminate it from my plant palette. 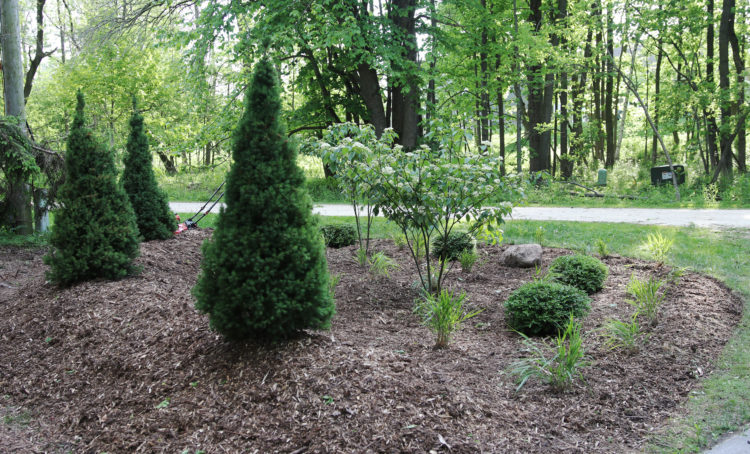 A new garden I planted last spring featured boxwoods as an important part of a limited plant palette.

The key to facing any foe, be it in the garden or otherwise, is knowledge. Boxwood blight is a fungal disease that defoliates plants, often weakening young plants to the point of death and making older plants unattractive.

The fungus can be transferred from other plants (often before they show signs of infection), on tools or even in vehicles that transport plants. It can overwinter on plants or plant litter and can splash onto other plants during rains or irrigation. And it can also be found in Christmas wreaths that may come from areas with higher incidences of blight.

The first symptoms of blight are dark spots on leaves that develop into brown blotches. Sometimes white spores are visible on the underside of leaves. Blight is differentiated from other issues by black streaks on stems. Infected plants defoliate from the bottom up, which can kill young plants and leave mature plants so unattractive that you don’t want them around. 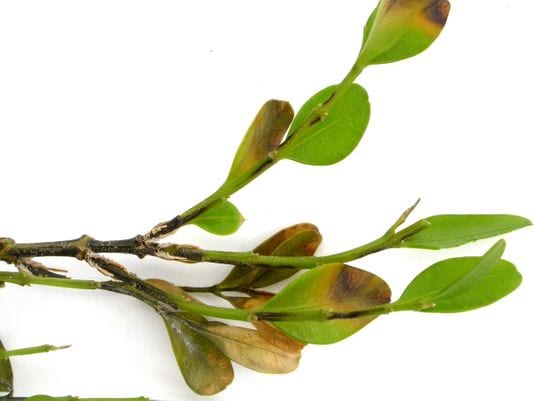 Brown blotches are a sign of blight, but note the dark streaks on the stems as well. Margery Daughtrey, Cornell University photo 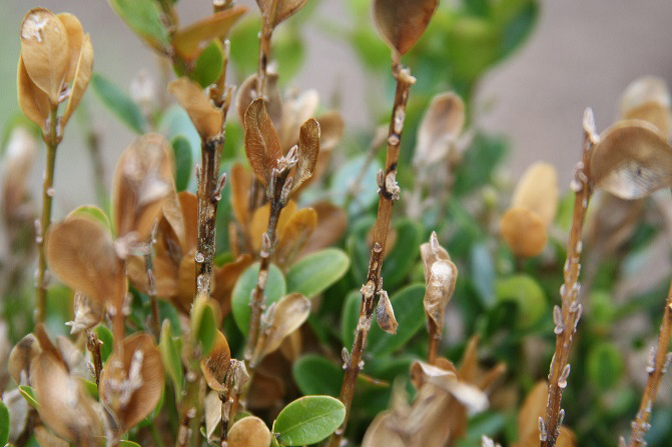 Note the dark streaks on the stems of this blight-infected boxwood. Georgia Department of Agriculture photo

WHAT PLANTS ARE AT RISK?

Pachysandra and Sarcococca (sweet box) can also be affected by the fungus that causes boxwood blight.

Boxwood blight was first identified in the U.S. in 2011 and is now in at least 30 states—everything east of the Mississippi plus Kansas and West Coast states and three Canadian provinces.

HOW TO AVOID IT

The best way to avoid boxwood blight is to avoid bringing it into your garden. Some large gardens with established boxwood hedges do not bring new boxwood on the property, but if you’re not ready to put a moratorium on your boxwood buying, then you have to be really careful about where you shop.

Buy only from reputable nurseries with a boxwood blight compliance agreement. When you do buy boxwood, it’s advised that you keep the plants separated from existing boxwood in your garden for a month to keep an eye out for symptoms.

Clean up carefully when pruning boxwood, making sure to pick up leaf litter. Linda Vader from Potager Blog, who has beautiful boxwoods in her garden and gives excellent pruning tips on her Instagram account, uses a cheap vinyl shower curtain spread out under a plant to collect clippings. Keep composted clippings away from other plants and if there’s any worry about infection, but or throw clippings away rather than composting.

It’s also important to disinfect your pruning tools with a weak bleach solution before moving to other plants. 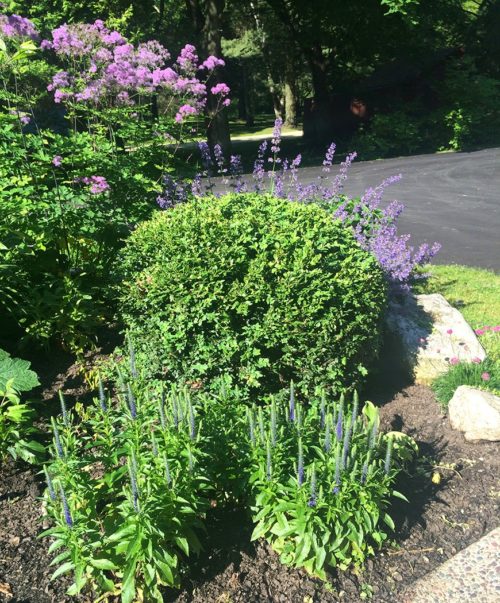 This boxwood ball has been an important plant in my garden for several years and I wouldn’t want to lose it to blight.

WHAT IF YOU HAVE IT?

If all this identification information has just put you into a panic because it sounds like something you’ve seen in your garden, step off the ledge. There are some things you can do. First, make sure it really is boxwood blight by sending a sample to your university plant lab (do package it in a sealed bag though and DO NOT take a sample to a local nursery for identification).

Although you can’t cure the disease, you can treat boxwoods that aren’t showing signs of blight with a fungicide containing chlorothalonil. These include Ferti-lome’s Broad Spectrum Landscape and Garden Fungicide and Bonide’s Fung-onil. On affected plants, you can cut out diseased areas and treat with the fungicide, which may work.

And it’s just good gardening practice to avoid watering from above and keeping your plants healthy, because healthy plants are always less susceptible to disease than others.

WHAT BOXWOOD BLIGHT MEANS FOR GARDENERS

If you have boxwood blight, most of this is probably old news to you. But if you’re like me, with some boxwoods in your garden but not a giant hedge that your garden would be lost without, you’re probably just trying to familiarize yourself with the disease and looking at smaller changes.

I’m not going to stop buying boxwood, but I’m changing the way I buy it. Smaller independent garden centers are already my preferred retailers but especially for boxwood I will only shop at garden centers (no big box stores) that have boxwood blight compliance agreements. If they don’t know what that is, I’m walking away. I know this probably mean I’ll pay even more, and boxwood is already pretty expensive.

I will also readily admit to being terrible about disinfecting my tools and cleaning up after pruning. That will change this year.

But I won’t treat with the boxwoods I have with fungicides unless I find evidence of blight somewhere.

Plant breeders are working hard to address the blight issue as well. NewGen boxwood was announced at plant shows in late 2018 and claims to be completely resistant to boxwood blight. It should be on the market in wide release in 2020.

Boxwood alternatives are also being developed. Proven Winners is offering two good boxwood alternatives this year: Strongbox and Gembox inkberry holly (Ilex glabra). These hollies have small leaves and take well to pruning, but unlike boxwood they can’t be pushed into part shade situations. And yews can be used in much the same way as boxwood. 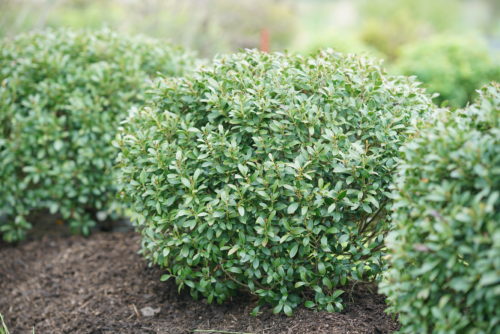 I’m approaching this as a garden threat that deserves some respectful prevention efforts, rather than outright hysteria (which I’m not opposed to when called for). Because I don’t want to think about a garden without boxwood.

by Erin @ The Impatient Gardener
14 Comments
previous post: A seed starting plan for hoarders
next post: You won’t believe the big seed-saving mistake I made