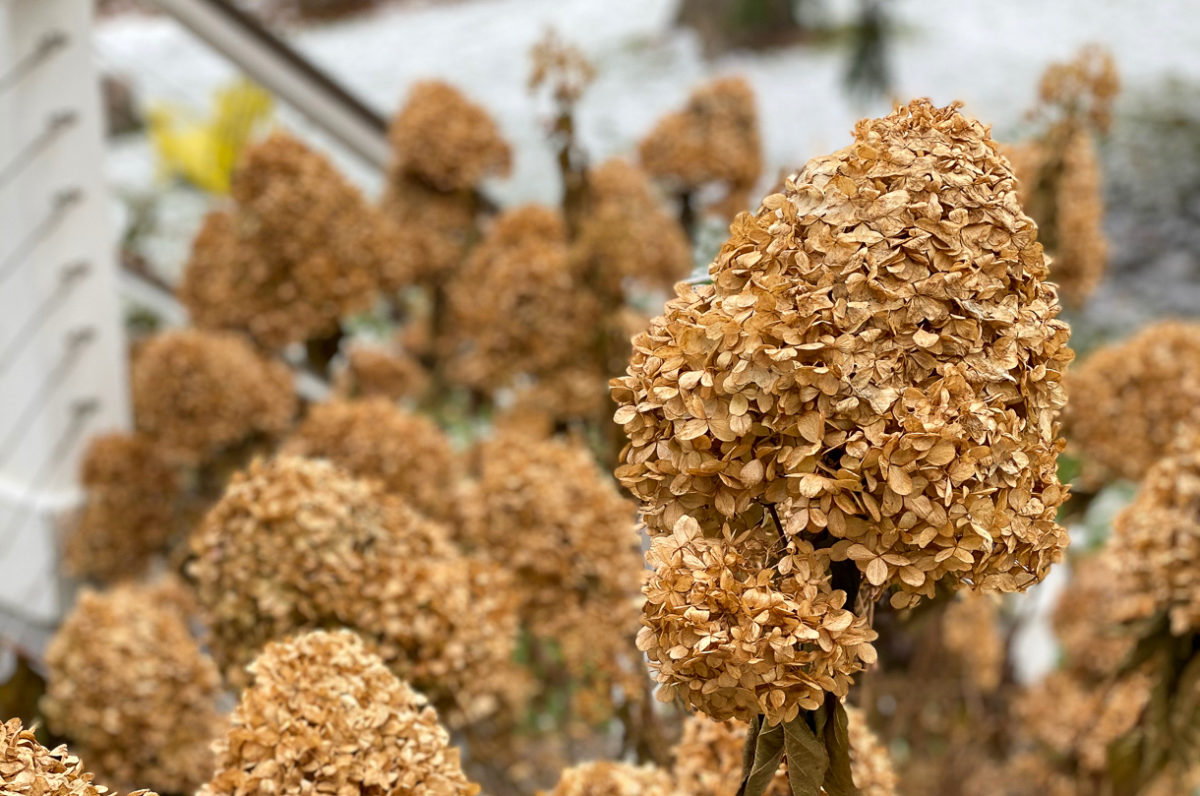 There are two possible explanations for what’s been going on outside here lately: Either the weather is completely off its rocker or I’ve forgotten what this time of year is like. After several decades of experiencing fall into winter in this particular part of the world you would have thought I’d have it down by now.

To sum up: It was a lovely autumn and then it got very cold, very quickly, snowed a bunch, snowed some more, stayed cold, got warmer and then got tolerable, which may or may not be what is considered to be normal this time of year. After digging dahlias and planting the last of the bulbs in the snow, I had basically written off the normal fall garden chores. The crucial things were done and I’d just have to live with not accomplishing the rest. 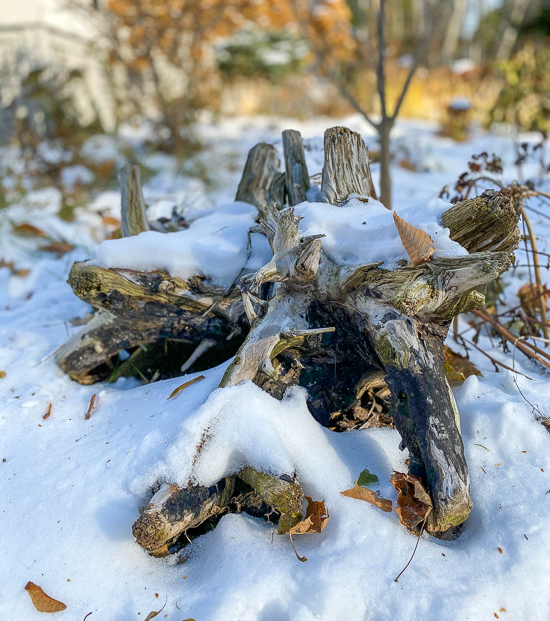 There are chunks of driftwood all over the garden, and they add so much to the structure of the garden in winter.

So when last weekend was actually nice enough to be out in the garden, although not nice enough to start a big project, I found myself with the rarest of opportunities: a day to potter around the garden.

Potter, by the way, is not a typo. I far prefer the British derivation of the word to the American “putter,” which suggests something less enjoyable to me somehow.

I cut a few things back, pried a few dead annuals out of the soil, yanked on the slimy hosta leaves until they gave in, leaving me with soaking wet winter gloves. The weather still calls for something that is more concerned with hand warmth than general hand protection.

I poured hot water from the kitchen faucet on the frozen container soil two gallons at a time in order to move the soil around enough to fit in the styrofoam I will anchor winter container ingredients into. I found a metal orb that’s been kicking around the garden for several years hiding behind a Baptisia. Its formerly red color had faded to that fleshy peach color that proves how long it’s been out there. So I grabbed a can of spray paint and gave it a fresh coat in a pile of leaves (several of which I later picked out of the dry paint). That was pinned into another container that may get some holiday greens soon. 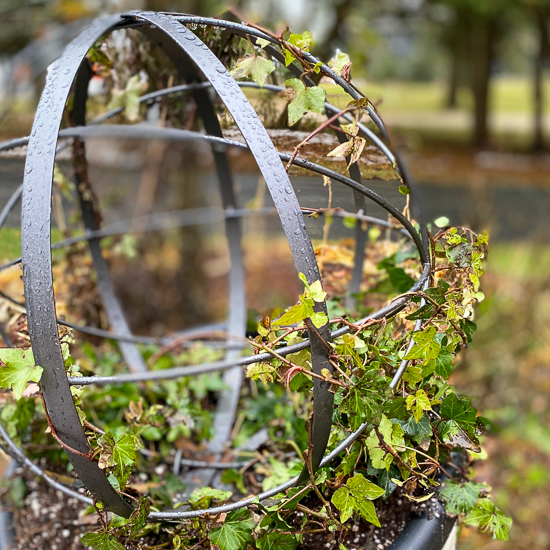 I managed to get the fall garden chores tipped over, and although I couldn’t bury it in the soil, I scrounged up enough leaves and some burlap to provide winter protection. The fact that it slightly resembles a grave in the garden along the house is something I’ll forget about, although I don’t expect visitors to not question it. 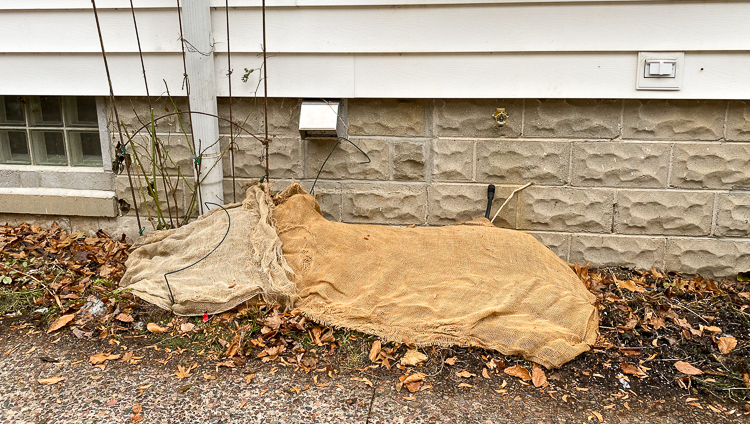 I’ll be the first to admit that this is not a particularly attractive approach to protecting the climbing rose in winter, particularly when it’s right at the front of the house, but it’s the best I could come up with when the ground was already frozen. The canes you see still standing upright on the left are, I believe, actually a different rose that I thought had died but apparently did not. They’ve never bloomed by they seem to grow aggressively, leaving me to suspect it may have been a grafted rose and this is the remnants of the root stock. I’ve decided to allow them to remain for the time being, but if I can determine that they are definitely not part of the ‘Autumn Sunset’ rose that I want to be growing there (the one that is under the makeshift grave), they’ll get the ax next year. 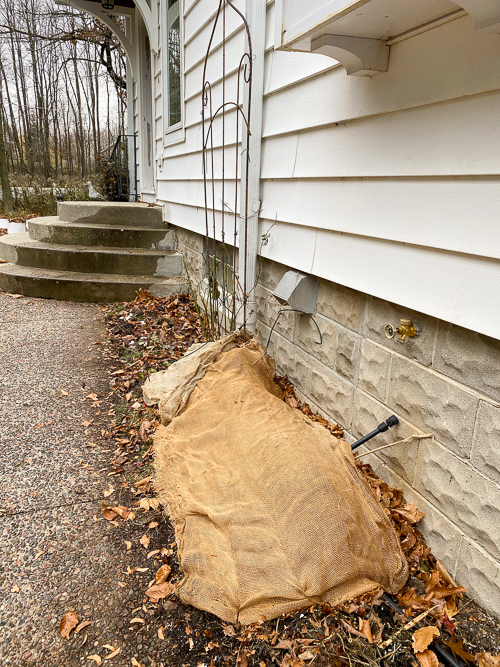 In other words, I did a lot of little things with no rhyme or reason as to the order in which I did them. I gardened without a list (which for me is usually one that only exists in my head but it’s still very real there). I avoided the urge to take pictures for a blog post (most of what you see here I took later) or shoot a video for YouTube.

And it was absolutely delightful. My hands were cold, my shoes were wet and the garden barely looked different at the end of the day, but it was the most fun I’ve had out there in a long time. 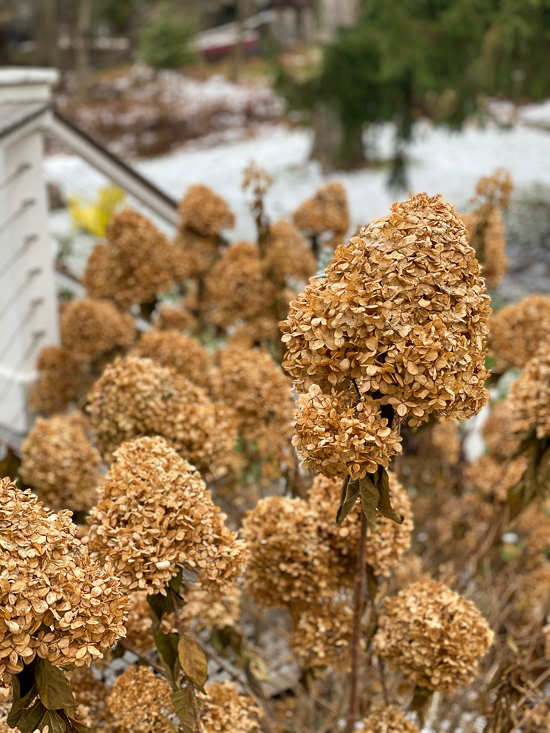 Of course such an approach is a luxury that I (and most gardeners) can’t afford for much of the year. Our time in the garden is precious and there are weeds to be pulled, plants to be planted, containers to be watered. There’s always a list.

But maybe forgetting about the list, even if it’s only every once a while, is exactly what we need to discover the pure joy of gardening again. Not the rushed kind that is measured in checkmarks on paper, but the kind that feeds your soul. Because it’s days like that that will carry me through the winter.

climbing rose fall
by Erin @ The Impatient Gardener
5 Comments
previous post: What would you do to save a plant?
next post: Gardeners’ gift guide