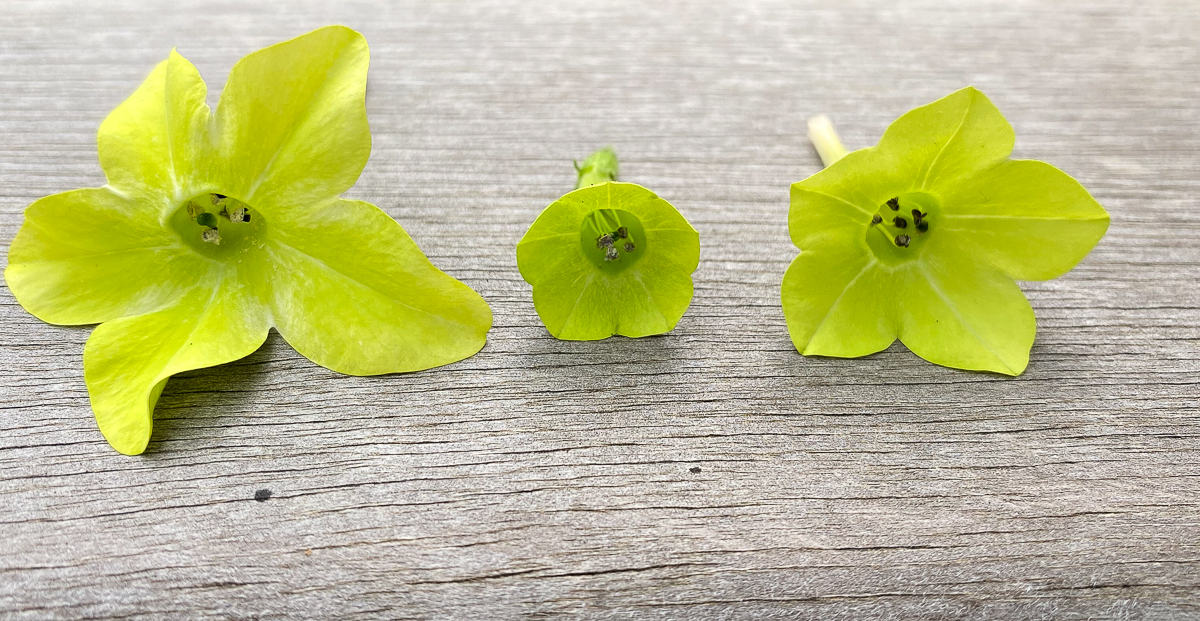 I’ve always been a reluctant seed saver. Even though I’ve been growing flowers, vegetables and herbs from seed for many years now, I save seeds from very few of them. In some cases I’m not willing to give up any flowers in order to allow the plant to produce seed, but most of the time it’s because I’m not always clear on how or when to collect seed and apparently I’m too lazy to bother researching it.

The seed I have collected in the past is dead easy to collect. Open an envelope, turn a seed pot over into it and shake.

Breadseed poppies (Papaver somniferum), which I grow as much for the seed pods as I do for the flowers, are the easiest of all seeds to save. When you can hear the seeds rattle in the pod, they are ready and they’ll fall right out like a pepper shaker.

Last year I also saved seed from one of my must-have annuals: Nicotiana alata ‘Lime Green’. It, too, is easy to save by dumping out the tiny pods, which give way to absolutely minuscule seeds by the hundreds. This winter I started both newly purchased seed and my saved seed under grow lights.

When I started looking at the Nicotiana now starting to put on a show in my garden I recognized both N. alata ‘Lime Green’ and N. langsdorfii, but there was an interesting new form growing from some of the seeds I had saved.

Its flowers are larger than N. langsdorfii but smaller than N. alata. They hang down and are a bright chartreuse like the former, but they are shaped like the latter. In other words, it’s a combination of some of the best attributes of each of its parents. 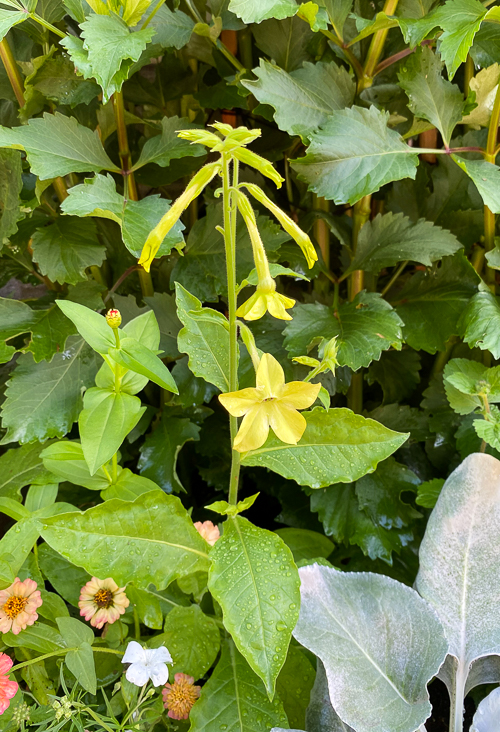 Nicotiana alata ‘Lime Green’ (above and below). 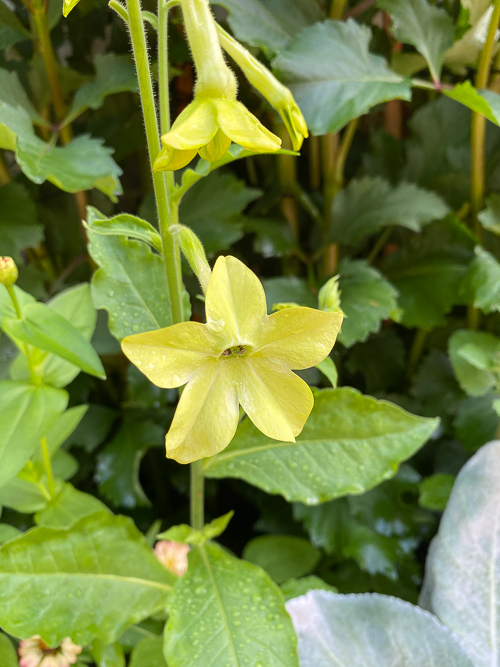 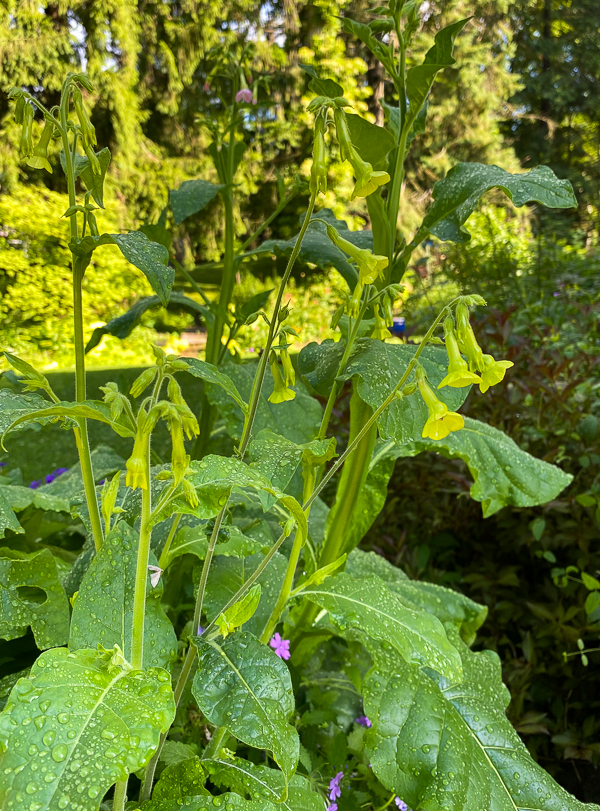 Nicotiana langsdorfii in the garden. 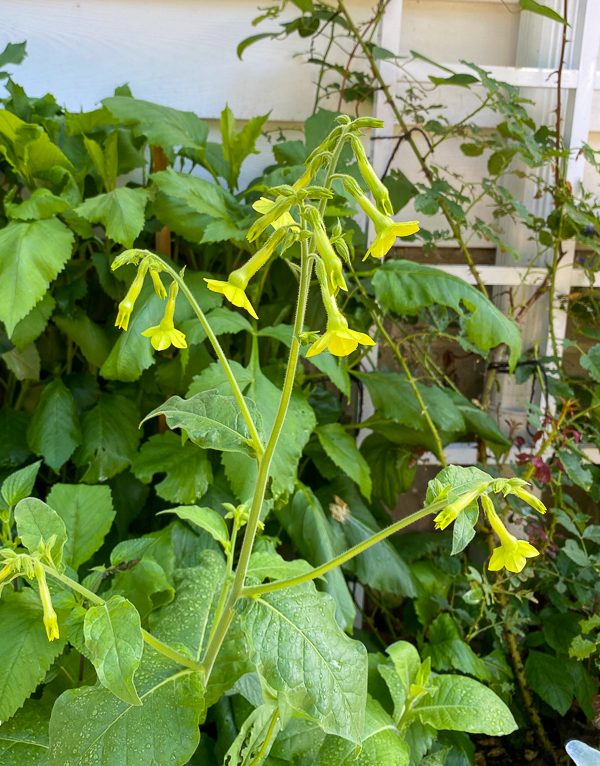 My own personal hybrid Nicotiana. Note how it hangs down like N. langsdorfii and has the same bright chartreuse flowers, but the flowers themselves are more open like N. alata, and are halfway between the size of the two parents.

Eureka! I created a new plant. Sadly, however, my elation was short lived.

Just minutes after excitedly posting about my discovery on Instagram — as one does — a plant friend sent me a bubble-bursting message. He had created the same Nicotiana.

I was already working on unofficial names for my newly discovered variety when Matt Mattus, who literally wrote the book on flowers — Mastering the Art of Flower Gardening — told me that N. langsdorfii is “notoriously variable.” In other words, there’s little chance that seeds I save from that plant will look the same next year. Matt’s note reminded me that I’d heard of a similar Nicotiana situation on the Gardenangelists podcast.

Such is the nature of growing plants from seed. Many are the whim of those fabulous pollinators, which flit around and, well, create new hybrids. This is equal parts disappointing and charming, maybe even a little exciting.

If I was up for growing it from root cuttings, thus cloning the plant (I’m not), I’d be assured the same plant in the future. Matt offered another option. I could save the seed and then plant it en masse — in all seriousness he suggested an acre, but offered that a 50-foot row might do — flagging the five or so best plants every year and then repeating the process year after year. If I could find one that was sterile and stable I could patent it.

All of a sudden this plant breeding gig doesn’t seem so exciting. I’ll still save seed from my Nicotiana child and grow it next year to see what happens.  And on the little envelope of seed I collect, I’ll write what I might have called it: Nicotiana alata x langsdorfii ‘Impatient’.