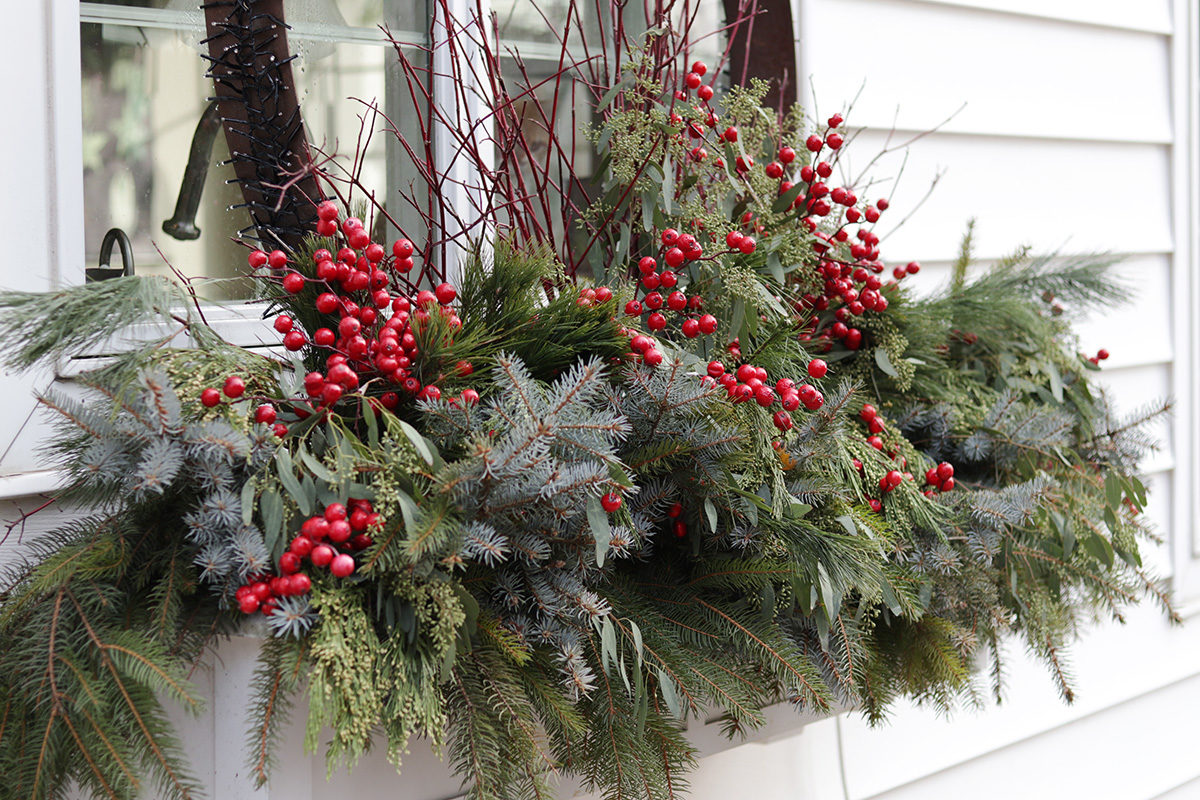 I love doing winter container designs. Sure they have a certain holiday bent to them but they stay up usually until March at my house because it offers some color in a world of gray and white.

The best thing about them is that it’s really hard to screw them up too much and literally anyone can do them. I’m fortunate to live in an area where I can forage for the majority of supplies and the things I buy I save from year to year, so this is also a really inexpensive way to decorate.

I did all the containers last weekend when we were enjoying unseasonably warm termperatures and that makes it so much more pleasurable. Unfortunately I finished after dark and then it poured for two days so everything got a little flattened before I was able to take pictures. No worries though … for the most part these are resilient decorations and a little flattening here and there doesn’t hurt too much. 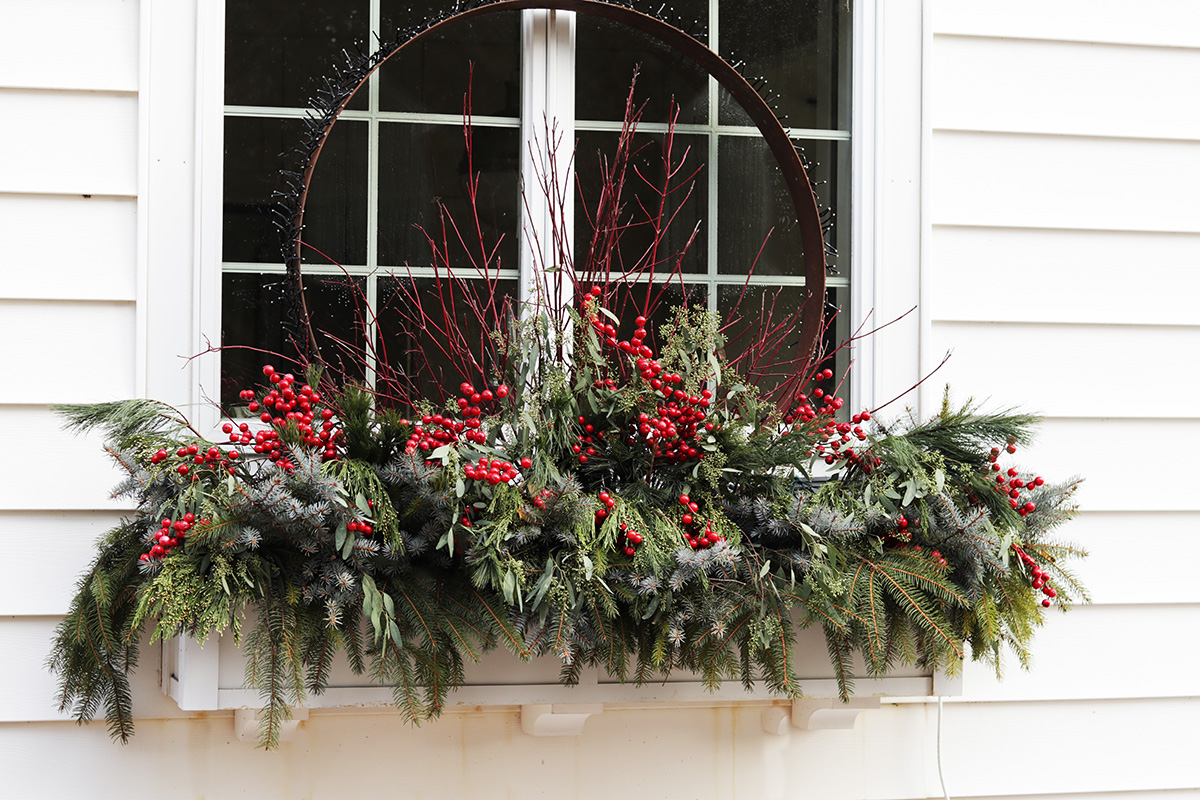 I’ve used the metal ring in the holiday window box for several years now and I still love the look.

The window box is a big deal for me. I can’t believe we lived so long without one there (we added it after our renovation in 2010) because it’s the only color on the otherwise entirely white front of the house. I’ll admit that this year’s didn’t turn out quite how I was envisioning, but I’m still happy with it. I did a sort of sun-ray pattern with the red twig dogwood, then a stand of seeded eucalyptus in the center. I buy eucalyptus in big bunches from Fifty Flowers, but I wish I had bought the silver dollar variety, which has larger leaves and less of the fine texture of the seeded variety, which I think gets lost in containers from a distance. 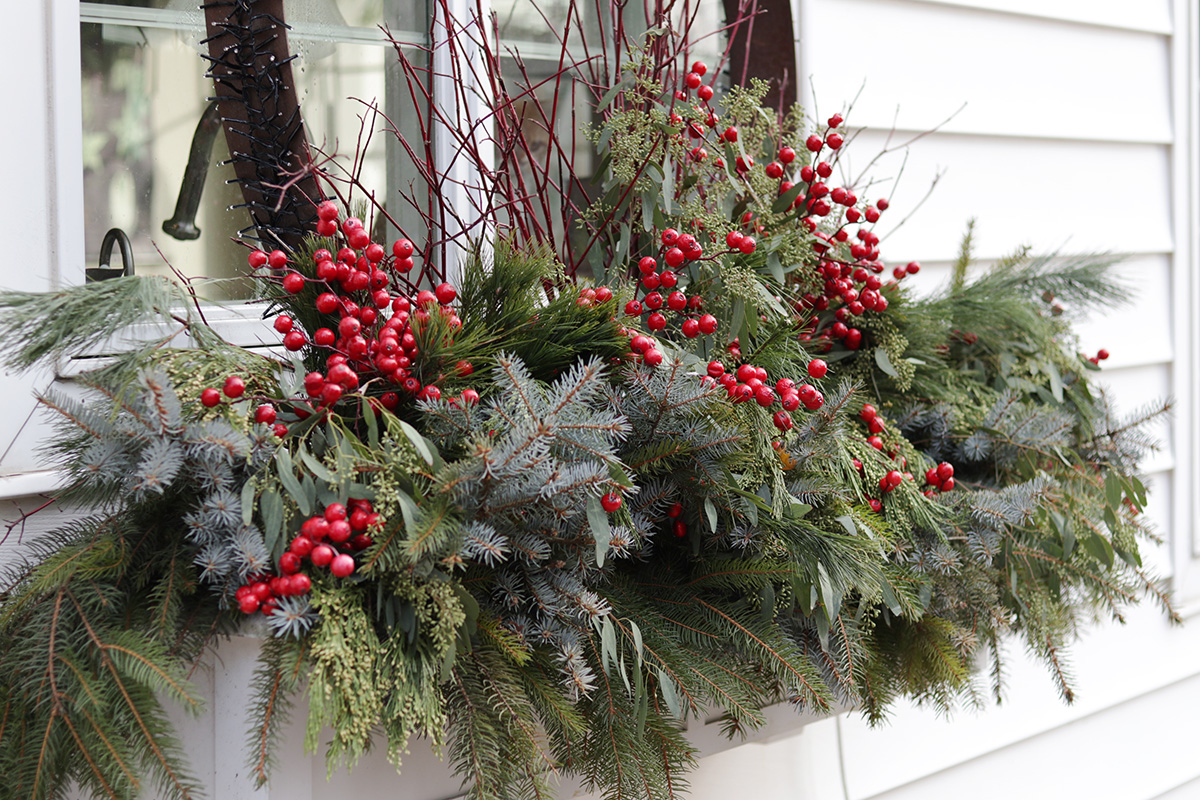 I was really craving color this year, so I went heavy on the faux berries. These are weather resistant berries that I bought many years ago and store when they aren’t in use. They’ve lasted pretty well.

I also lit the hoop, which is the best part of this display as far as I’m concerned, and put another string of lights behind all the greens for a glow from the inside. I think I may go back and add a string of big lights to the main greens for some more light at night. 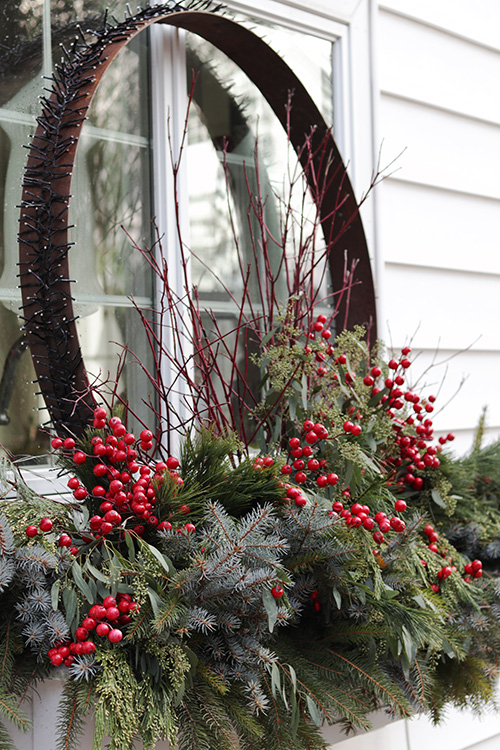 The other container I really like to focus on is the big one by the front door. I was inspired by a container that Deborah Silver did that featured glass drops on a small scrub tree. I’ve been meaning to cut down this ash sapling for ages and had the perfect excuse.  I added some wired LED lights and found glass chandelier drops (affiliate link) that were much less than anything labeled as ornaments.

The container was filled out by a mix of greens, some eucalyptus and more faux berries. 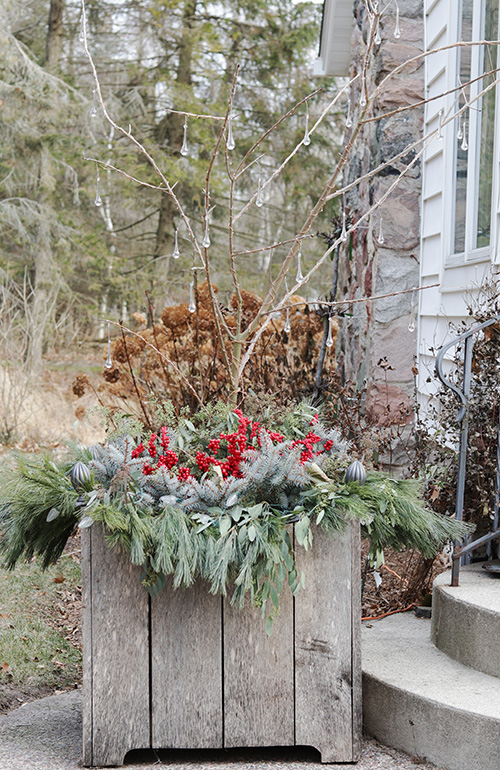 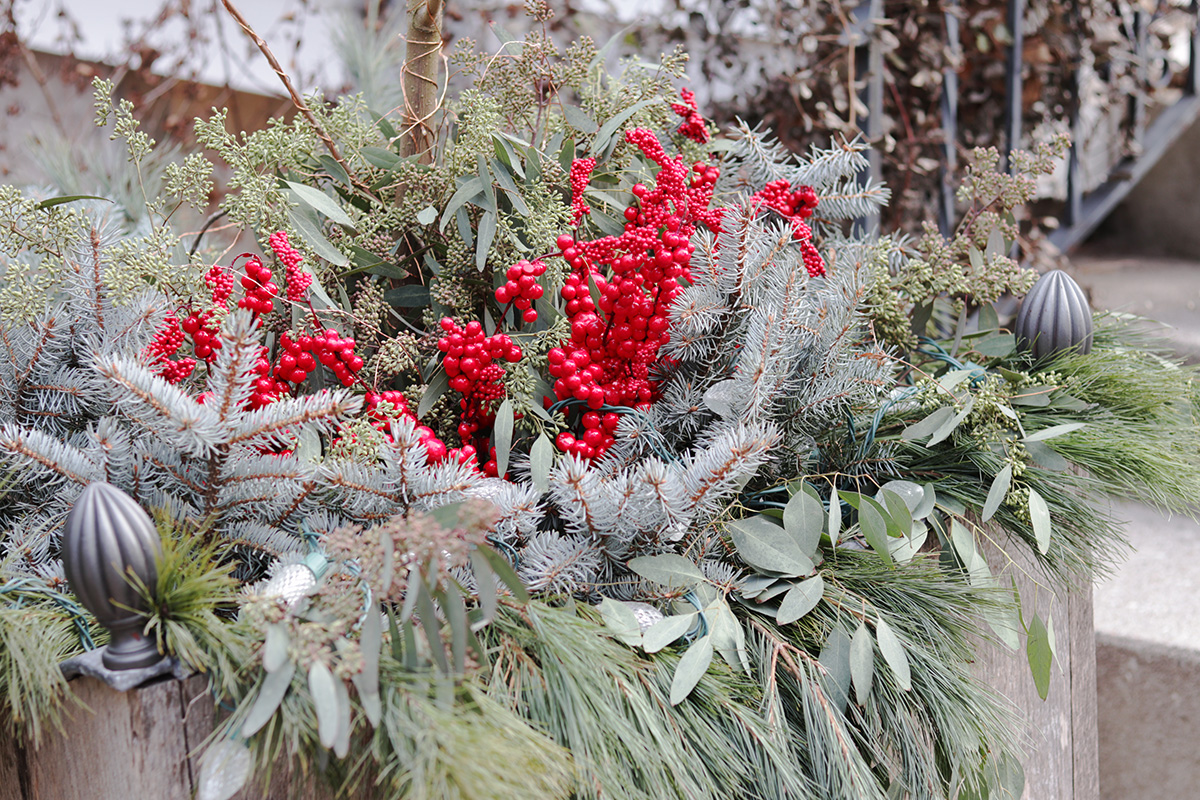 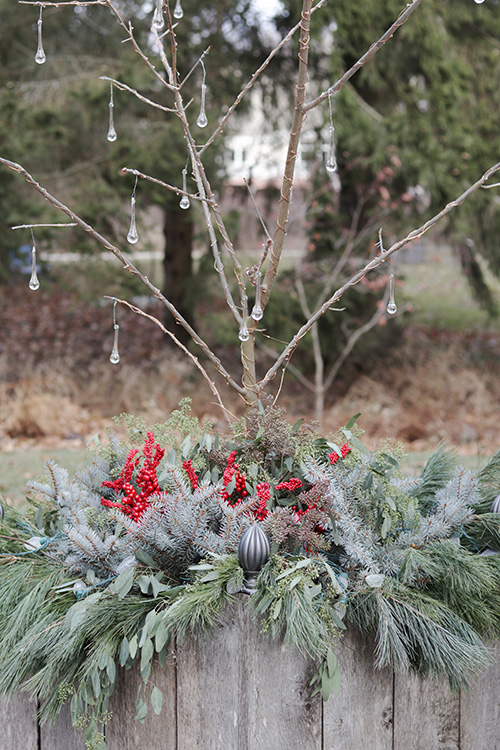 In the center of the garden is an urn I bought several years ago to put the Christmas tree in. I moved outside after that and it’s starting to fall apart so I’ll be looking for a replacement for summer, but for now it continues to add some color in a spot where not much else is happening. 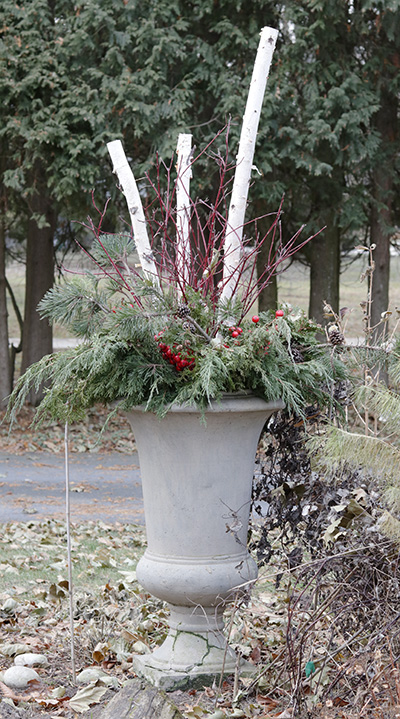 The tomato box by the back steps was the last container I did so it pretty much got the leftovers. I still think it looks nice. This is proof that you can kind of throw anything you like into these containers and it will look pretty good, and certainly better than if it sat there empty. 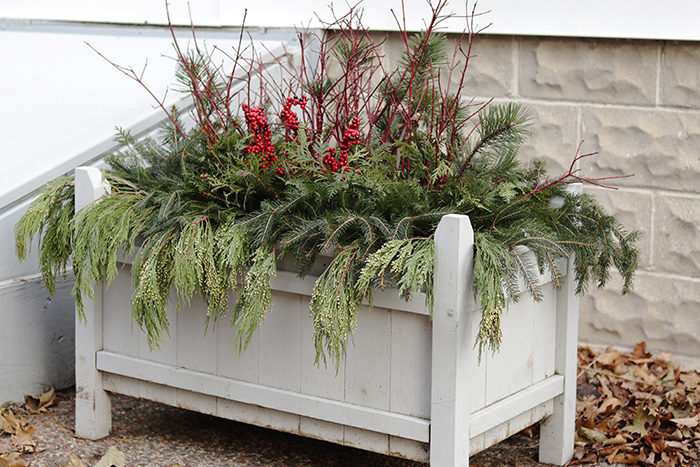 The trough by the garage got a similar treatment with birch, red twig dogwood and greens. I kept the garland on the pergola long on the end so I could extend the lights into the container and at night it looks quite lovely. 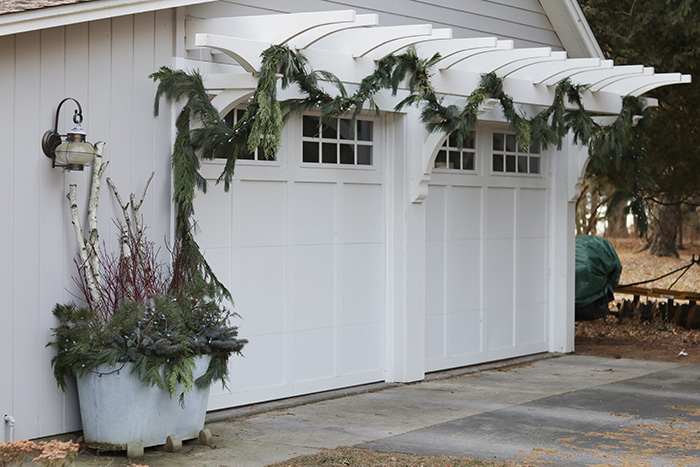 I may add a wreath to the center of the pergola, but I sort of like the simplicity of just a lighted garland. Sidenote: The neighbors behind us with the red garage you see there are lovely people. If I had been thinking I would have asked them if we could paint the back of their garage at the same time we were painting ours. I bet they would have said yes. 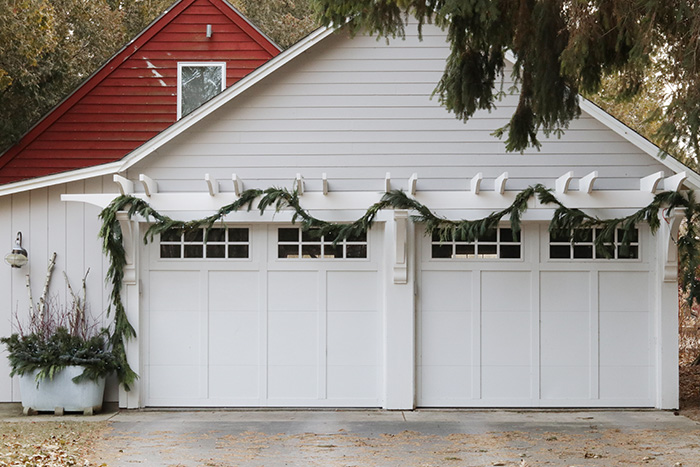 My husband has asked on several occasions what the purpose of the pergolas on the deck and the garage is. Since we don’t have to deal with a sun problem, I always tell him it’s because they look good. Secretly though, the best reason for them might be for Christmas decorations. 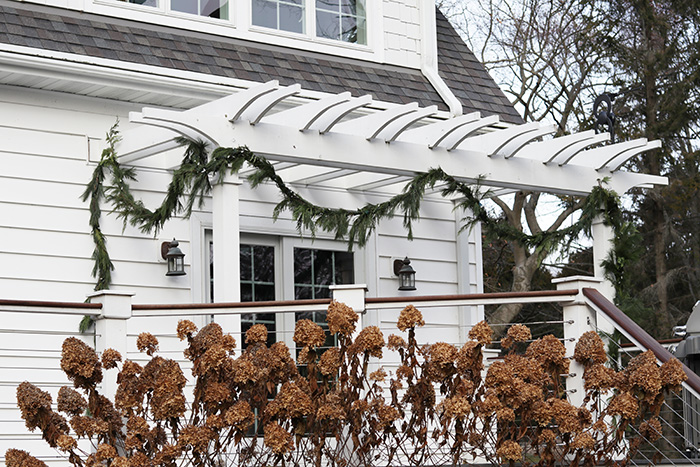 Our first snowfall is on its way so I’ll be sure to get some photos with all the containers dusted in snow and I’ll try to get some to show you the lights. I haven’t even purchased a Christmas tree yet, much less decorated one, but my house is still full of holiday spirit. These decorations are far more enjoyable both to create and to appreciate on a cold winter day.

Here are some past posts on outside winter decorations.

containers holiday winter
by Erin @ The Impatient Gardener
8 Comments
previous post: Gifts for gardeners (including you)
next post: The winter light display (aka containers at night)