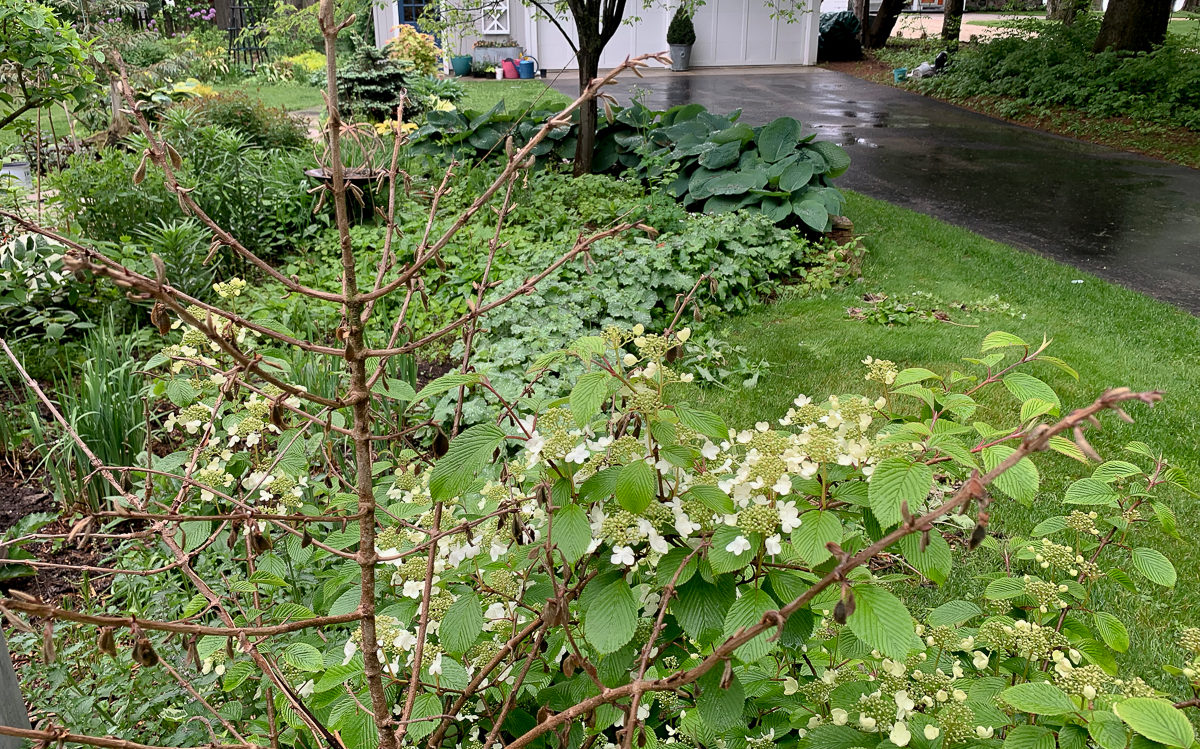 The effects of our extreme winter are still showing up in the garden. With the cool, wet spring we’ve had (as much a blessing for a busy gardener who is thankful that the weeds aren’t head-high as  it is a curse), everything is slower than usual. In fact I estimate that most things are still two weeks behind what I would consider normal for the garden (a moving target if there ever was one).

Still, there’s no comparison to the plant losses I suffered after the winter of 2017-2018, which had a warm spell followed by a very cold spell and some very wet and cold weather (I can’t think of a single plant that appreciates being cold and sodden simultaneously).

Sadly, one of the main shrubs affected by this most recent winter, which was marked by zone 4 (possibly even zone 3) cold temperatures, were my Viburnum plicatas. All three of them in my yard are suffering from botrytis, a fungus that tends to affect plants that are already stressed. I think it’s safe to say that, given that all were healthy going into winter, the stress they suffered was at the hand of Old Man Winter. 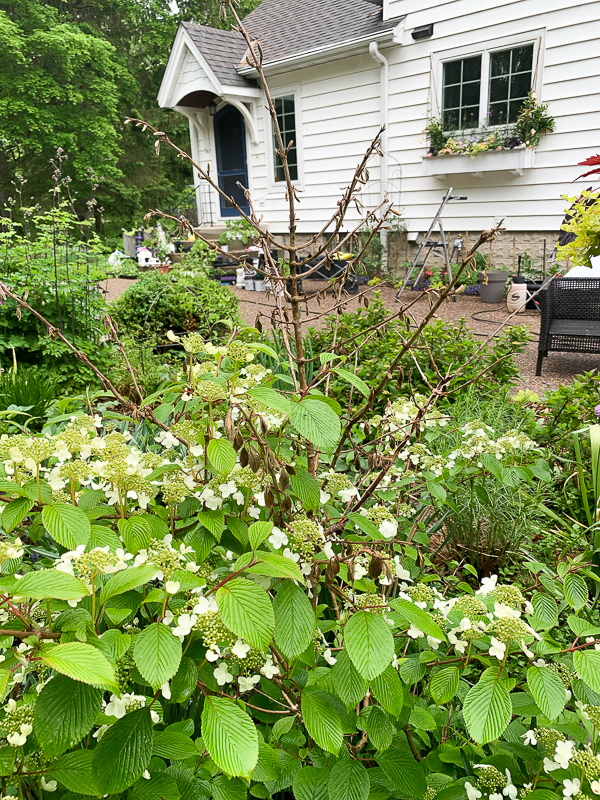 A full branch of this viburnum is shot, and I’m about 90% sure botrytis is to blame. Two other Viburnum pilicatas in the garden suffered a same fate after the tough winter.

Fortunately they each lost just branches, rather than the entire plant as was the case a few years ago with my ‘Summer Snowflake’ Viburnum. I am going to baby them all a little this year to hopefully send them into winter strong.

A few days ago I was ready to declare the Chionanthus virginicus (aka white fringe tree) finally dead, but it is finally showing signs of life. Originally planted in front of the deck, I got irritated with it for being spindly and taking too long to leaf out in spring so I moved it. It’s nothing special and hasn’t really done any better in its new location, but at least it appears to be alive.

I’m not surprised to see that the Cornus hybrid ‘Venus’ (dogwood) is struggling a bit. When I bought it several years ago it was sold to me as a zone 6 plant. Hopefully it will perk up a bit this summer. 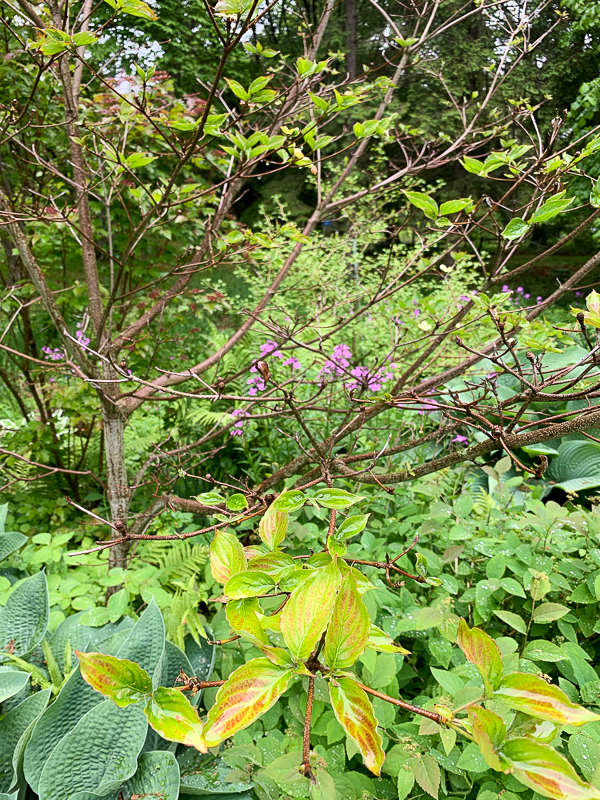 It’s difficult to see what’s happening on this ‘Venus’ dogwood among thee other plants in the garden, but it’s leafing out very slowly and very unevenly.

Perhaps the most profound loss was of every single rose—five this year—I wintered in containers in the garage. I’ve been successfully using this method for several years, but I think this year, even in the garage (which is unheated) it was just too darn cold for zone 5 plants in containers.

Oddly, all of the roses showed signs of life at first, with swelling leaf buds and pliable stems. All were slowly brought outside and protected with some row cover, but all have ceased any progress. It’s a big loss that has me rethinking how I overwinter roses in containers. All of the roses I grew in the ground managed OK, by the way. 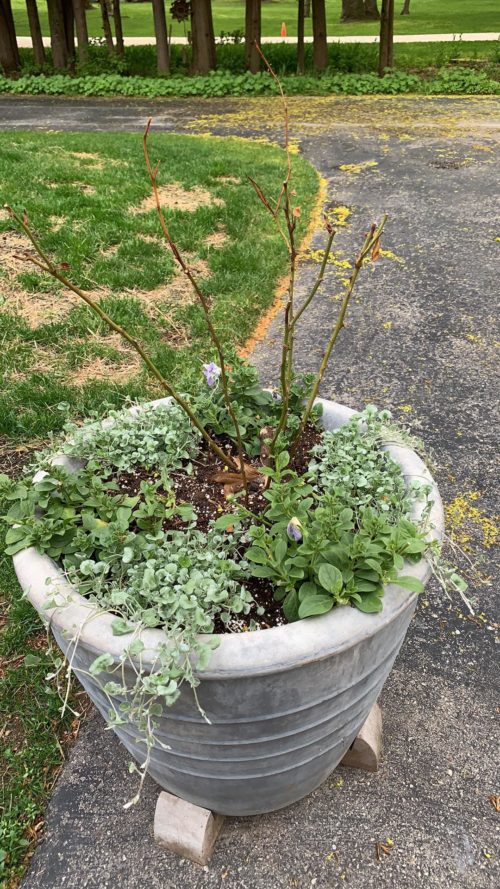 This rose started leaving out (see below) and then seemed to freeze mid leaf out. I lost every rose that I overwintered in containers for the first time in many years of overwintering shrubs in containers. 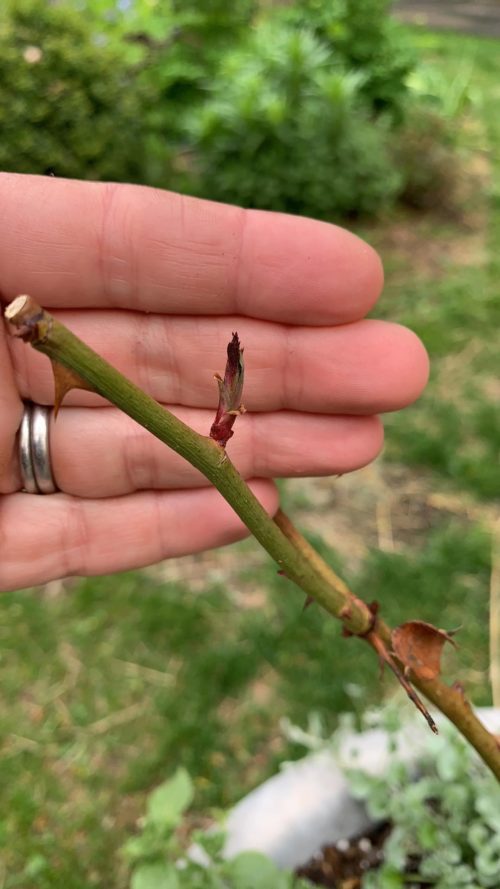 There are other plants that have disappeared, so far at least, but I’m not willing to put all the blame on winter. Sometimes these things happen.

Although I’m fully in favor of waiting a plant out just to make sure that it is well and truly dead (as the Munchkins say) before declaring it compost, it’s a bummer when that realization doesn’t come until June. Most garden centers and online nurseries are sold out of the best plants, so it is at least a year of staring at what once was before there’s an opportunity for the only really good part of plant death: a new replacement.