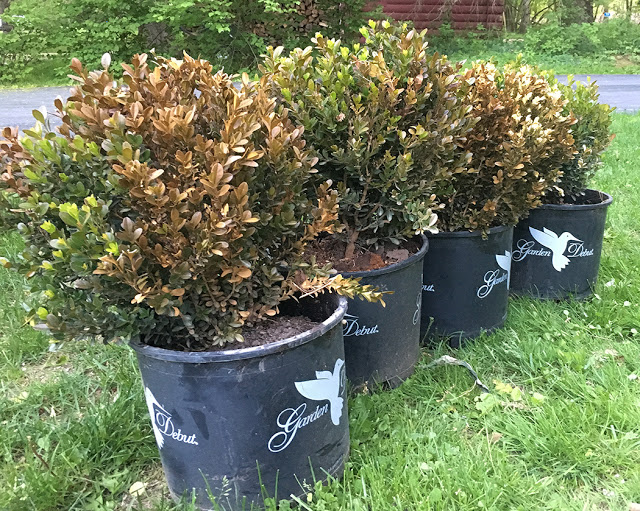 As you know, I’ve been working on the circle garden. I’ve not showed you much progress lately, but I hope to finish up the planting this weekend and I’ll be able to show you some real progress.

I have, however been planting bits of it, including the first thing that went in: a centerpiece boxwood in each section.

Almost immediately, they started declining instead of thriving. The foliage turned brown, there was no noticeable new growth and they may have actually been getting smaller.

So I went through all the usual checks in my head: Did I water enough? Was there something wrong with the soil? Was there a cold snap that affected them?

And nothing added up.

And then one morning the mystery was solved.

Want to take a guess as to what was going on?

I’ll give you a hint. Here’s the culprit.

Yep. It appears that Odin, who is funny, usually cute (although he’s badly in need of a bath and trim at the moment), good-natured and generally a very good dog, had been helping with the watering of my boxwood. And from what I can find online, it’s not unusual for dogs to have this kind of attraction to boxwood.

Odin, like all our dogs, has been trained to stay out of the garden, but that only works when it looks like a garden. Since the boxwoods went in first, I think to Odin that looked like a bathroom surrounded by soil. Now that there are other plants growing there I’ve not noticed him even venturing close to the area.

So, as much as it pained me (boxwoods are not cheap), I went out and bought four new boxwoods and replaced them all. I’m putting so much work into this garden this year that I just won’t be able to stand looking at half dead boxwoods there.

There’s hope for the original boxwoods. I think they’ll probably come back, but it will be quite a while. I’ve replanted them elsewhere in the yard for now.

boxwood newfoundlands plant death
by Erin @ The Impatient Gardener
8 Comments
previous post: WHY I DO STRANGE THINGS IN THE GARDEN
next post: FRIDAY FINDS