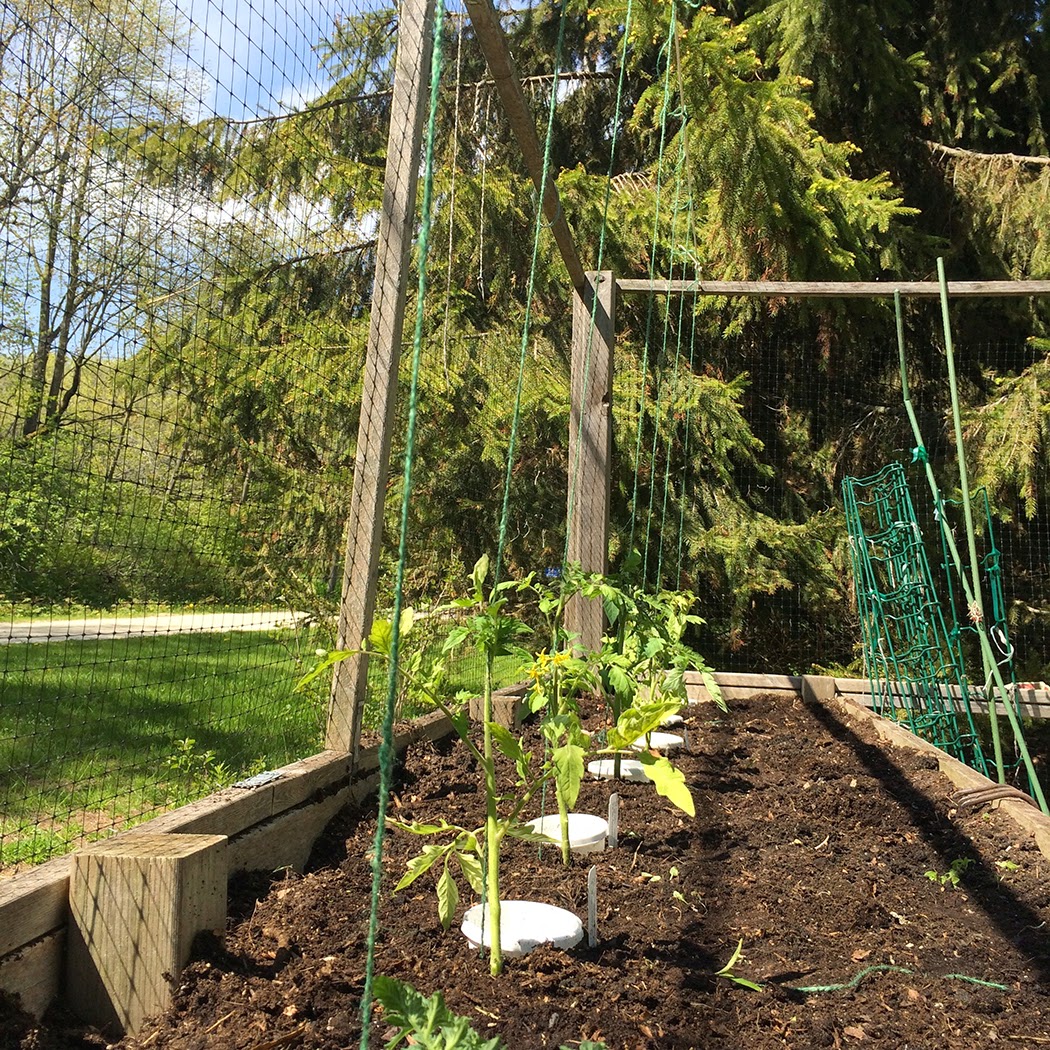 Although it was not intentional, this has become a very experimental year in the vegetable garden. First I tried out the potato towers. The jury is still out on those as I’m seeing the first potato shoots coming out now. And it turns out that the “straw” that I bought (where they guaranteed it was straw and not hay and therefore no viable seeds) was a big, fat lie because I have hay seedlings popping up everywhere. I should stuck with the chopped up straw for lawns for the whole thing. Oh well, that’s what you get in an experiment.

Then this weekend I planted the tomatoes at the house in a way I’ve never done before.

Since I grow all heirloom tomatoes, they tend to get huge. This year I’m going to try to keep a much tighter rein on them. That means being dutiful about pruning out the suckers (those aggressive shoots that pop up in the “armpit” between the main stem and a branch) and topping them at some point late in the summer to allow all the plant’s energy to go into ripening the fruit that is already present instead of allowing it to make more tomatoes that will never have time to ripen.

As part of the first part of that plan, I’m trying a new method for staking them. I’ve tried many things over the years, and the most successful of them has been tomato ladders, but even those get to be a big mess by mid-summer. And if a branch goes awry, there’s no bringing it back in.

So this year I’m going to grow them up a single string for each plant. The idea is that the string sort of winds around the main plant as it grows and you also tie it on where necessary.

To create a stable upper support, I screwed in two stainless steel screw eyes, one on each side of the top of the garden caging. Then I used a low-stretch line (in this case kevlar cording but there are many other things that would work; you just want to stay away from cotton cording or something that stretches a lot) between them and hung individual pieces of jute twine from the overhead line. The twine was a couple feet longer than necessary to accommodate tying it on top with a slip knot and having enough to tuck under the tomato plant. (*See the bottom of the post for my tip on how to get this overhead line really tight.)

If you don’t have a garden setup where you could just connect a piece of line on an overhead-type structure, I’ve also see the same thing done with plumbing pipes, about 1-inch in diameter with just 90-degree elbows on the corners (imagine an upside-down U) and then sinking the legs deep in the garden to provide stability. Then you hang the twine from the upper pipe.

Making sure that the twine was hanging straight, I dug a hole like usual to plant the tomato plants. I always plant tomatoes plenty deep, having stripped off the bottom branches. Before I stuck them in the holes, I tucked the twine under the rootball, then filled in as usual. I made the twine taught, but not tight.

With a little tension on the twine, you can sort of wrap it around the stem, without disrupting branches.

Then I did another little experimental type thing. I planted empty nursery pots, just 4-inch round ones that annuals come in, next to each plant. The idea is that I will water into those pots, delivering the water to the root zone of each plant without splashing up soil (and potential disease) onto the leaves.

I have no idea how any of this will go. But you know I’ll tell you all about it.

* HOW TO GET A LINE REALLY TIGHT

It’s important for that overhead line to be tight to keep some tension on the twine (this is not a factor if you’re using a solid setup such as the aforementioned plumbing pipes), but it’s hard to pull a line tight between two points. Here’s how you can get it nice and tight (by the way this works great for clotheslines and any number of other applications).

Tie a bowline into the screw eye on one end (or just tie a bowline around whatever you’re tying into). Don’t know how to tie a bowline? Well you can watch my really uncomfortable video on how to do it here.

Pull your line to the other end and get a rough feeling for where it will be going through the screw eye on that end. Then tie a small bowline about a foot back from the screw eye in the main body of the line.