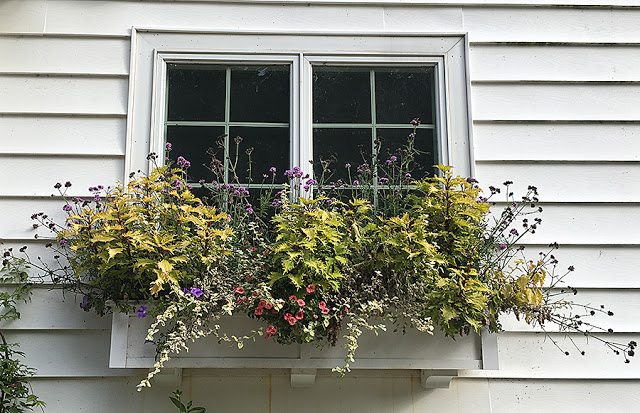 On Tuesday I walked into a funeral service in full on late-summer weather and emerged a couple hours later into weather more suitable for late October. A brisk breeze came off the lake, leaves were falling on our heads and the sun refused to provide the warmth I swear it had earlier in the morning.

In case I wasn’t fully aware of the changing garden, that chilly breeze set off the alarm in my gardener’s brain: It’s time to start wrapping things up in the garden.

And while I’m starting to move things around, clean out the oval circle garden and generally taking stock of the garden’s performance this year, it’s also a good time to analyze the summer’s container plantings. By this time in the year they’ve done all they will do; it’s all downhill from here.

Some affiliate links have been used. I appreciate your support of this blog!

The window box is both my favorite container to plan and plant every year and the one I struggle with the most. Part of that is because it really is a focal point and a show piece and when you only really get one crack at it a year, it is disappointing when it doesn’t turn out how you had envisioned.

For the most part, I’ve been happy with it this year. Now, certainly it looks shaggy, tired and, at least in the case of the coleus, a bit overgrown.

I’m very happy with how the Verbena bonariensis ‘Meteor Shower’ performed at the back of the box. It got tall enough to provide enough height but didn’t completely block the view out the window. It would have looked nicer throughout the summer if I had kept up with deadheading it, but that’s not the most fun in a window box and it didn’t suffer much because of it. The plants on the end flopped out a little bit, but I sort of like how that turned out.

In front of that was ‘Lemon Twist’ coleus. I felt that I needed a strong foliage plant in that position, but honestly it didn’t grow as well as I would have liked. It took awhile to get going and now, of course, it’s too big. It’s not horrible, but I think the whole box would have been better if I had chosen a darker color coleus.

In the front row I planted Surfina ‘Heavenly Blue’, Ornamental Oregano ‘Kent Beauty’, Helichrysum petiolare ‘Lemon Licorice’ and Superbells ‘Coralina’. The oregano did well and the licorice plant did what it normally does for me, which is to say nothing spectacular but nothing horrible either. The ‘Coralina’ looked nice for the majority of the summer, although I think it may have been a bit crowded. Unfortunately the ‘Heavenly Blue’ was a huge disappointment. I used it both in the window box and the large container by the front door and it hardly grew in either location. The color of the few flowers it did produce was gorgeous but it was a big underperformer.

So all in all it was an OK window box year. Even though I cut back on the amount of plants this year,  I still think I planted too much. And I think next year I’ll go for some darker foliage to contrast better with the white house. I’d probably give it a B- if I were grading it. If the petunia would have grown decently I think it might have been firmly in A- territory.

Now I can start thinking about next year’s design. I just wish I didn’t have to wait so long to take another crack at it.