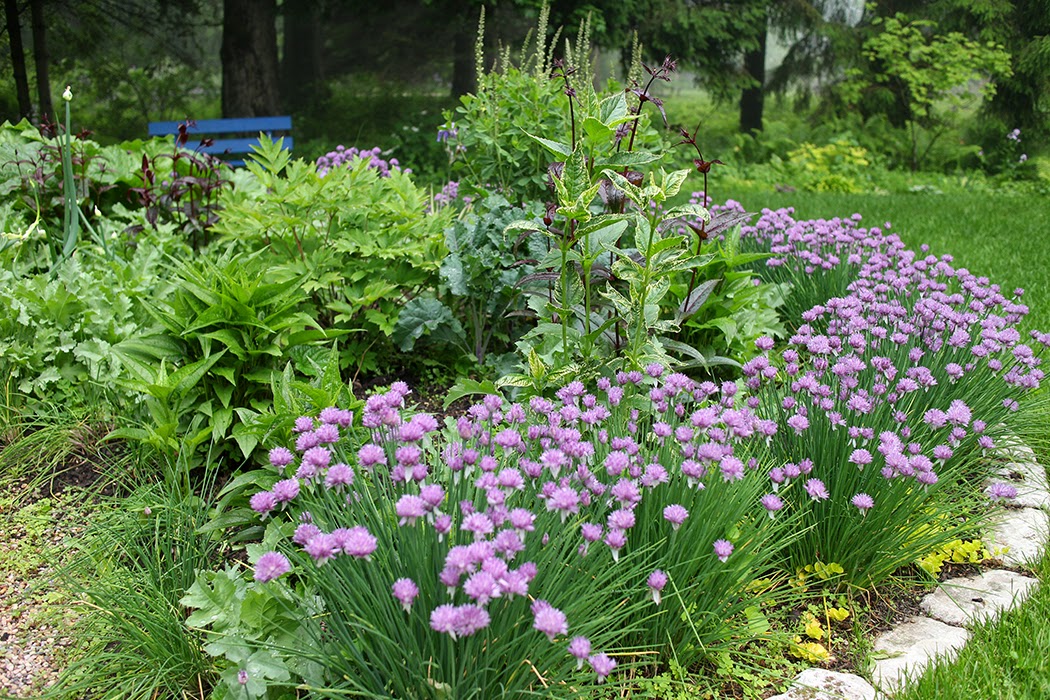 There are so many things happening in the garden at this time of year. Sometimes I feel like I mention something and then completely forget to give you an update on it. So today I’m tying up a few loose ends.

GARDEN CLEANUP
A couple weeks ago I mentioned my new strategy for getting the garden in shape: Take one garden area at a time and finish it completely before moving on to the next. It should come as no surprise that I grossly underestimated how long this would take, but I’m happy with the progress I’ve made.

I spent most of one day working on the circle garden which is now looking pretty good. The chive hedge I planted last year has just started blooming and I absolutely love it. So much, that I’ve decided to continue it around the entire perimeter of that segment of the circle garden. I need a few more chives to surround it (I’m hoping to take a few off my mom’s hands or else it will have to wait until I can divide what is there), and eventually I would like hedge the other two segments of that garden.

There are a lot of bare spots in this garden (actually, all of my gardens, which is something I’m discovering as I free them from weeds), so filled them in with 75 kale seedlings. I planted Redbor kale seedlings in one segment and Lacinato in the other two. If they grow well, and I hope they do, I think it will be a really interesting look to the garden. Maybe by the end of summer I’ll be able to call the circle garden (which is very much an oval) the kale garden.

We’ve had a very wet and cool spring and the amount of weeds is astonishingly. Some kind of vetch (see note in caption) seems to have taken over the garden and I’m literally pulling it out by the handful.

The potato towers are finally starting to show some signs of life. As you can see, there are plenty of shoots popping out and up. I’ve been “hilling up” the compost on the top of towers as the shoots grow. Other than that, I’ve done very little with the towers since I planted them. I have occasionally taken the hose and made an attempt to water the entire thing, but that’s about it. I’m starting to lose hope that the entire tower will be covered in green leaves, but there is a long summer of growing to go yet so we’ll see.

I successfully moved the compost bin and ended up going with the sunnier location by the vegetable gardens. I actually tucked it a little more under the tree than I intended to, but once I dug out the trench to level it, I wasn’t going to dig it again, so that’s where it ended up. There was some lovely finished compost lurking at the bottom of the bin that I’ve been happily using. I’m throwing all the unfinished bits back in and starting to make some new layers as well. Because its the time of year for lots of greens (plant trimmings and kitchen waste; I never put in weeds), I got a supply of newsprint trimmings from work to serve as “browns” in the pile until some fallen leaves are available in autumn.

It has not been very summerlike here so the tomatoes have done very little growing, but so far my new method of staking is working out pretty well. One of the jute strings broke off at ground level. I’m hoping this does not happen to the rest. I had some excess at the top so I lowered that and tucked the bottom back into the soil as firmly as I could.

Hallelujah, I found someone to paint the garage and with luck it will be finished by the end of the week. With all the work there is to do in the garden as well as a very busy sailing schedule (pretty much every weekend from now through August), I knew I wouldn’t have time to do all that scraping and painting and I didn’t want to look at an unfinished garage all summer. 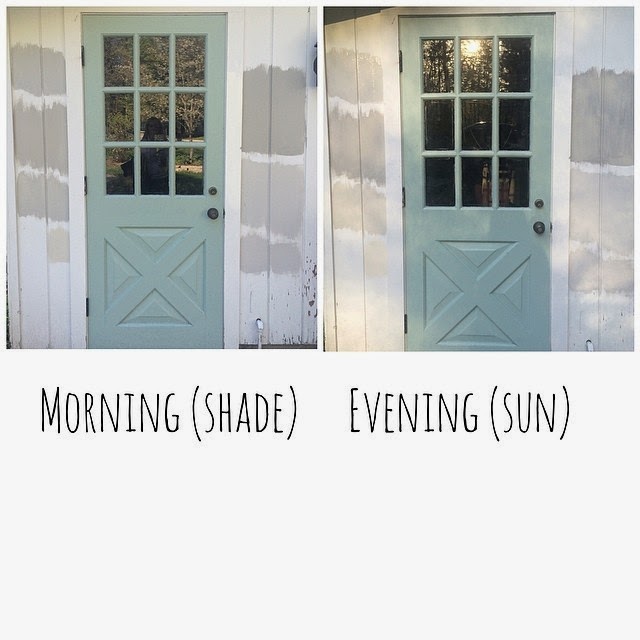 I ended up choosing Ozark Shadows for the siding color (the top right in these photos), which was a favorite of many people. The trim will be Simply White, which is the same color as on the deck.

The rain barrel we put on the corner of the garage is already proving its value, even if I think it’s pretty ugly. The garden by the garage is right on the edge of reach of both hoses, so it has been very nice to be able to water that area from it. There’s not enough pressure in the hose to actually spray water, but it works great to just set by the base of new plants and give them a good soaking.

NEW BACK/SIDE GARDEN
It’s finished. Well as finished as any first-year garden ever is. I keep waiting for a nice day to take some photos, and that never seems to happen. I’ll show you soon and hope that the deer don’t eat it in the meantime (they’ve already munched my Sweet Summer Love clematis to the ground).

That’s what’s been happening here. What’s up in your garden?