Yep, you’re in the right place. I just made a change to the design here.

Although the last design, which I did myself after not being satisfied with multiple people who I paid to try interpret what I wanted, was a favorite, I think it’s been there since January 5, 2013, so it was feeling a bit stale to me. At the time, I wrote that that was version 6 of this blog, so that makes this one version 7. That seems like a lot of switching around, but the first ones were not good.
I’m hoping you’ll find this new design to be lighter, brighter and easier to look at. Readability is a huge thing for me, so I’ve chosen fonts and other elements with that as the main criteria. If you ever find something is difficult or cumbersome to read (other than my occasional ramblings), I’d appreciate it if you’d let me know because I want to fix that.
I spent a lot of time trying to figure out what I wanted this incarnation of the blog, which is approaching the start of it’s 6th year in blogland (my first post was April 27, 2009), to look like, and a big part of that was creating a new header. Since I’m a bit of a font geek, I pored over more fonts than you can imagine and ultimately decided that there was no font that would be just right.

That’s when I sought out a hand lettering artist and I found just the right person in Caitlin Welsh, who runs the Etsy shop CharlieWhiskey. Caitlin does all kinds of very cool stationary, wedding stuff and all kinds of custom work. I’m a fussy customer and she worked with me on drafts until we found exactly what I was looking for. She even spent extra time doing something special to a handwritten “The” that I ended up not using in the final logo/header. Maybe it will show up in the future.

Anyway, that cool looking “Impatient Gardener” you see up there at the top of the page is actually her hand lettering. I love that.Here’s a quick guide to what’s what here on the new design.

Those little black icons on the right are the quick way to connect with me and the blog in more ways than you’ll probably ever want to (but do it, anyway). They are, in order, Facebook, Twitter, Instagram, Pinterest, Bloglovin, send me an email and subscribing to posts.A lot of you receive my posts by email and the link to sign up for that is right under all those icons.

My favorite way to follow blogs is Bloglovin because it has such a clean interface that works well on all my devices.

I still have the Instagram preview over there, just in a different format so you can get a peek at what I’ve been doing over there. That’s often where you’ll get real-time updates of what I’m working on weeks (sometimes months) before they end up on the blog.

And I’ve added a Popular Posts widget as well. I enjoy these on other people’s blogs so I’m hoping you enjoy these here too. That window box post (which is currently in the No. 1 position) is far and away the most popular post ever, and it’s from 2010. I think that means I need to do more how-to posts. 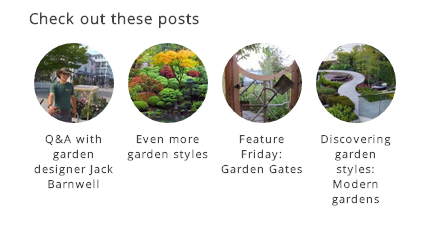 One of the things I like on other blogs, is the links to other posts on similar topics, so you’ll find that below each post as well.

You can still pin images from here to Pinterest using the hover “Pin it” button that appears over every image (although less obviously than before). Please feel free to pin away from here, but I do as that you keep or add source information if you have time to. Last week alone I went through four different copyright disputes because my content was posted on other spammy type sites without permission or any kind of credit.

Most of the rest of things are the same here, other than that I went a little circle happy. I’m going to try to update the tabs at the top and I’d love to try to create some kind of map of the yard with the various gardens named so you can refer to it when I talk about a specific garden. All in due time.
For now, I hope you like the new look.
by Erin @ The Impatient Gardener
3 Comments
previous post: FINALLY, A WEEKEND BACK IN THE GARDEN
next post: COMBATING COLD WITH INDOOR SEED STARTING