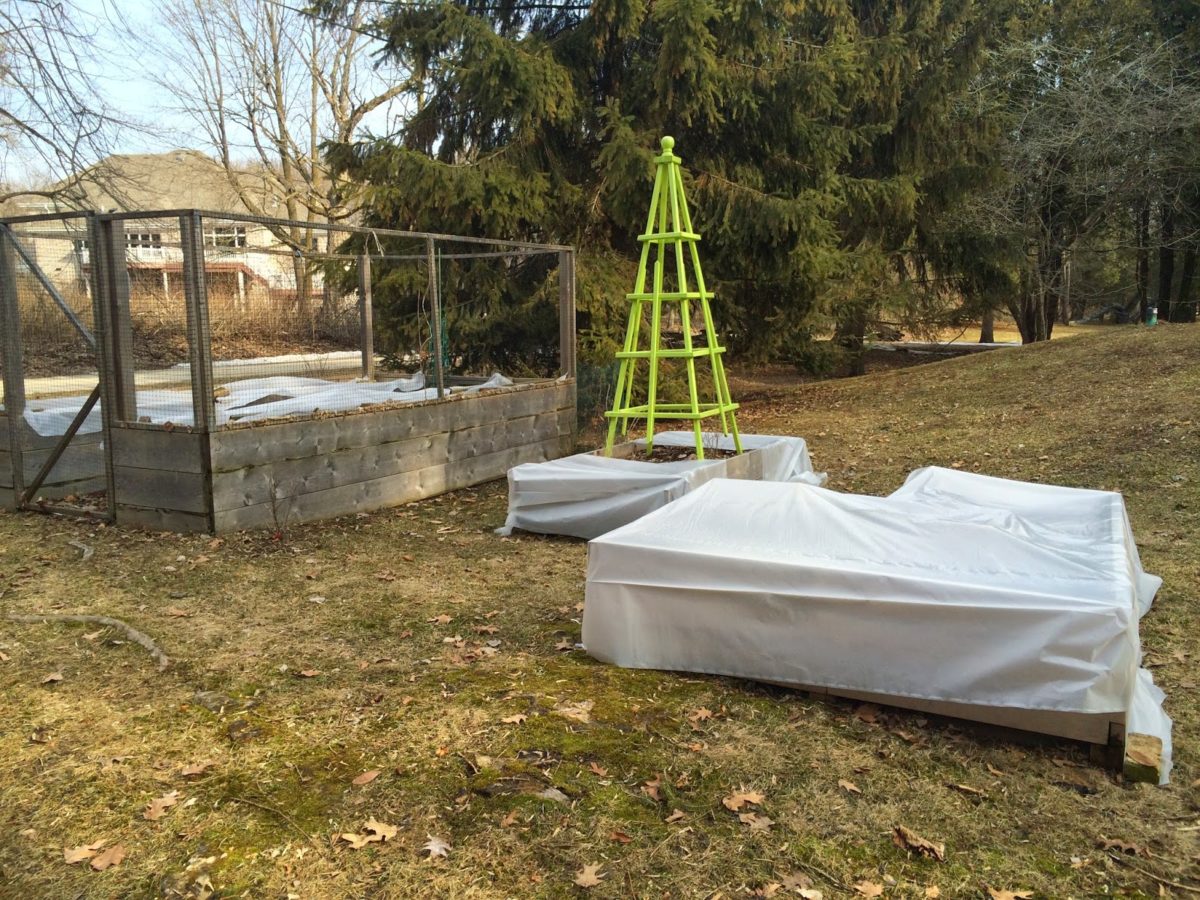 The temperature hovered in the 40s here this weekend but the sun was shining and it was a glorious two days in the garden.It was one of those weekends when there were a billion different things I could have done outside. Which means I was able to happily jump around from project to project, just enjoying being outside.

I emptied all the containers of their holiday greens, for starters. I know, you’re thinking that’s a bit like still having your Christmas tree up, but I really loved having something to look at over the past several months. The silver dollar eucalyptus faded to a beautiful tan and while the greens had dried out quite a bit, they still looked good. I saved the dogwood branches in case I decide to try to make some rustic obelisks, which is on the “I think I want to try” list.

I also took care of a bit more pruning. All of the roses were pruned, including a couple of Oso Easy roses that I pruned back quite hard in anticipation of moving them. I also cut back the rest of the ornamental grasses and pruned most of the clematis. I still have to do the Group 2 ‘Ken Donson’ in the middle of the circle garden which requires a bit more time and concentration and a couple of the Group 3s that are still under snow (yep, parts of the garden are still under ice and snow).

The ground in the raised vegetable beds is still frozen solid. I can’t even get the pots that I heeled in over winter out. So I covered them all in 4-mil plastic from the hardware store. The box said clear, but it’s sort of milky white. Anyway I just held it down with bricks and I’m created a little greenhouse affect to warm things up. 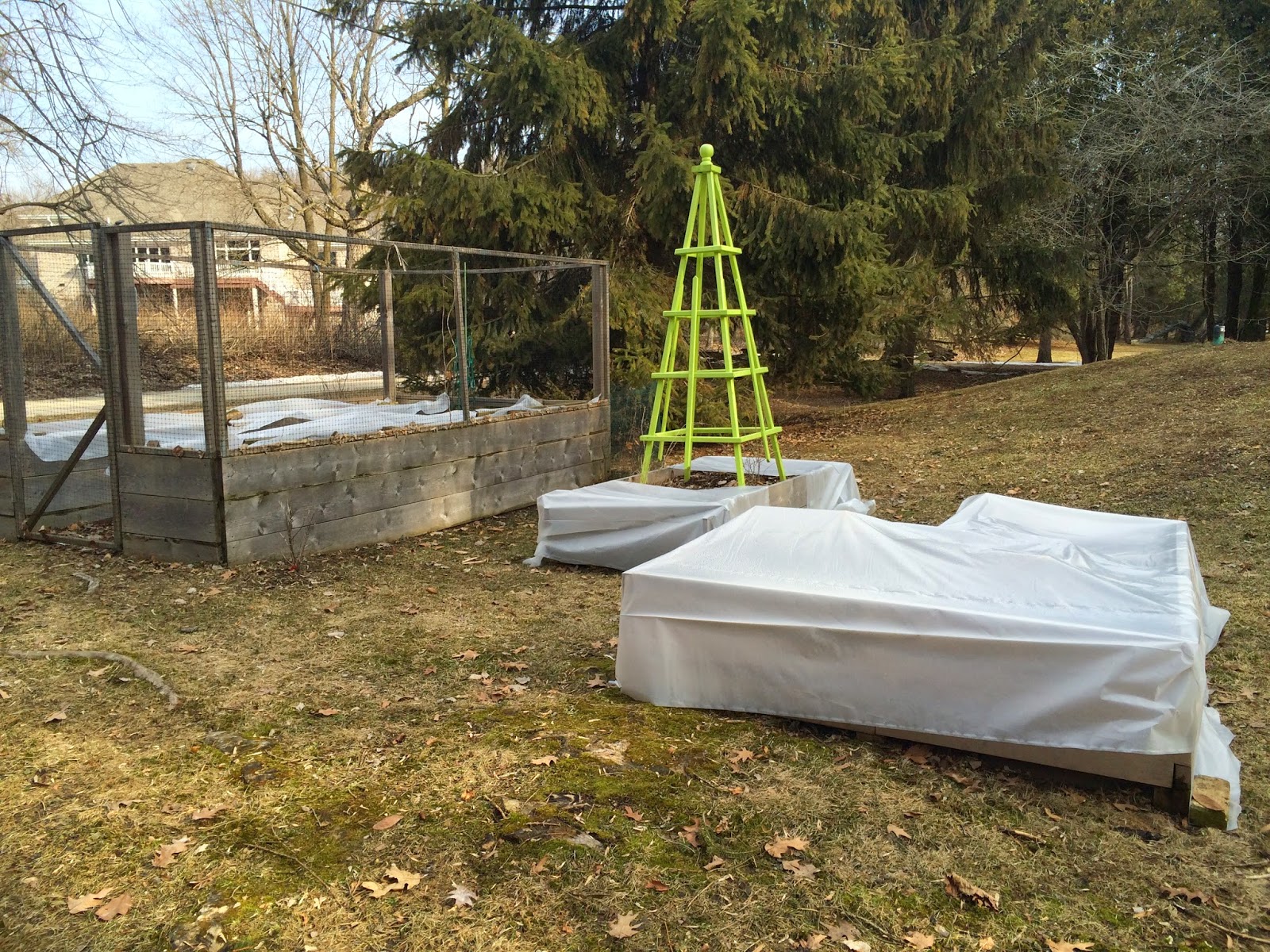 I spent a lot of time just poking around. Tulips are poking up in the southern-facing bed at the front of the house, most of the sedums have growth at their bases and it looks like the dozens of Geranium x cantabrigiense ‘Biokovo’ that I planted in the new garden bed last summer have hung there. Tiny little leaves are visible on the bases of many.

But mostly, I spent a great deal of time laying out the new back yard plantings. It required a rather elaborate arrangement of stakes, a tape measure and a lot of landscaping paint. It is so worth getting the kind of spray paint meant to be sprayed inverted for this. I altered the plan a few times once I got it all laid out and looked at it from the upstairs window so there is a lot of paint around, but I think I have it set. 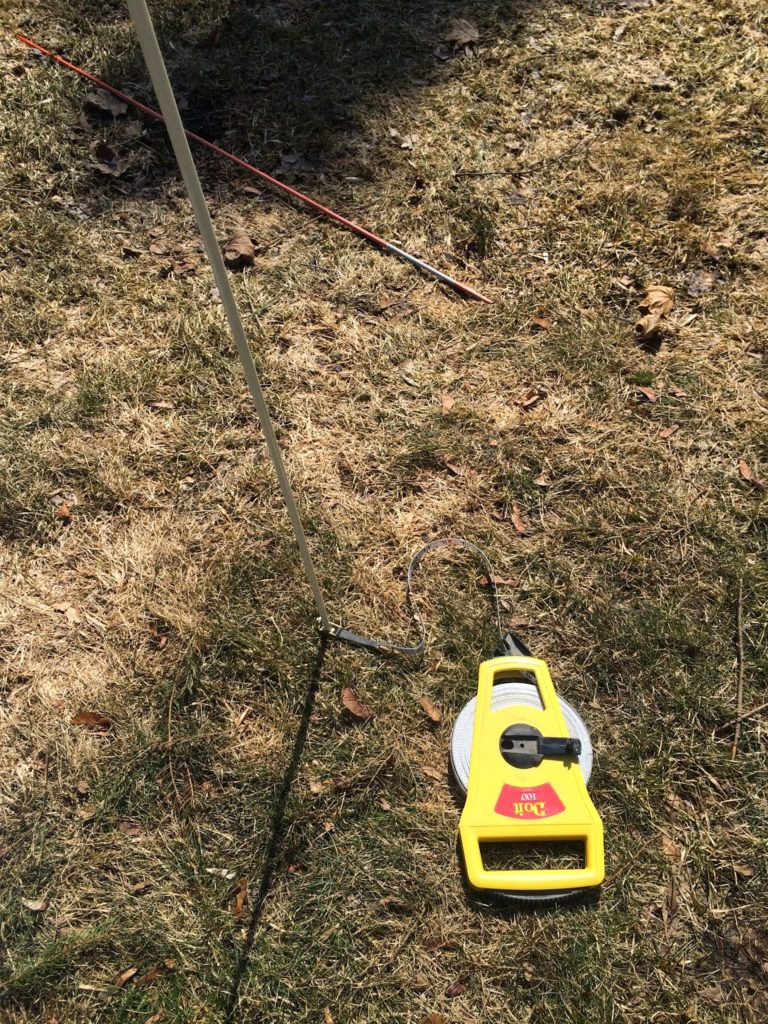 This photo should be called “Indecision.” The farther to the left the lines are indicates more garden over grass. Guess which one on I’m going with? 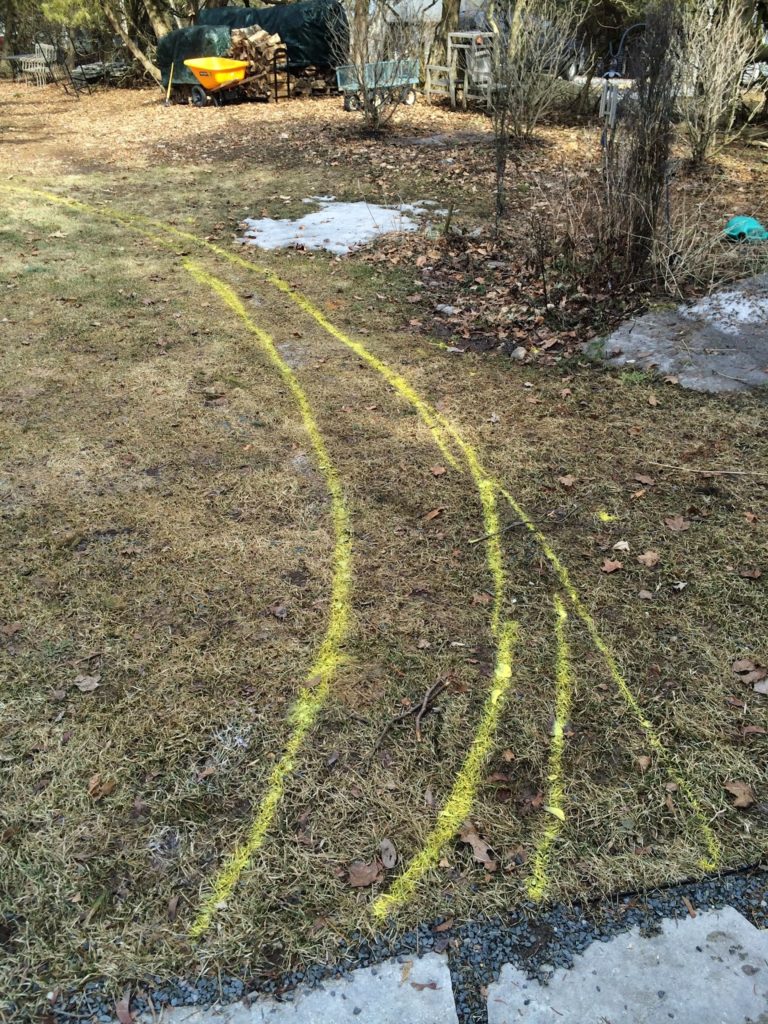 There were so many other things I could have been doing. I should rake out that bed along the house sooner rather than later with everything popping up there. I need to lay down some cardboard over some of the weedy areas on the periphery of some of the newer gardens. There are a few more perennials to be cut back. At this time of year the garden chores are happily never ending.

Of course in a few months I’ll use this space to whine about having too much to do in the garden. I’ll tell you that I yearn to just sit back with a drink in my hand and enjoy my hard work. But now, after such a long winter, it is the hard work that I yearn for. It is so good to be in the garden again.

Did you get into the garden this weekend?