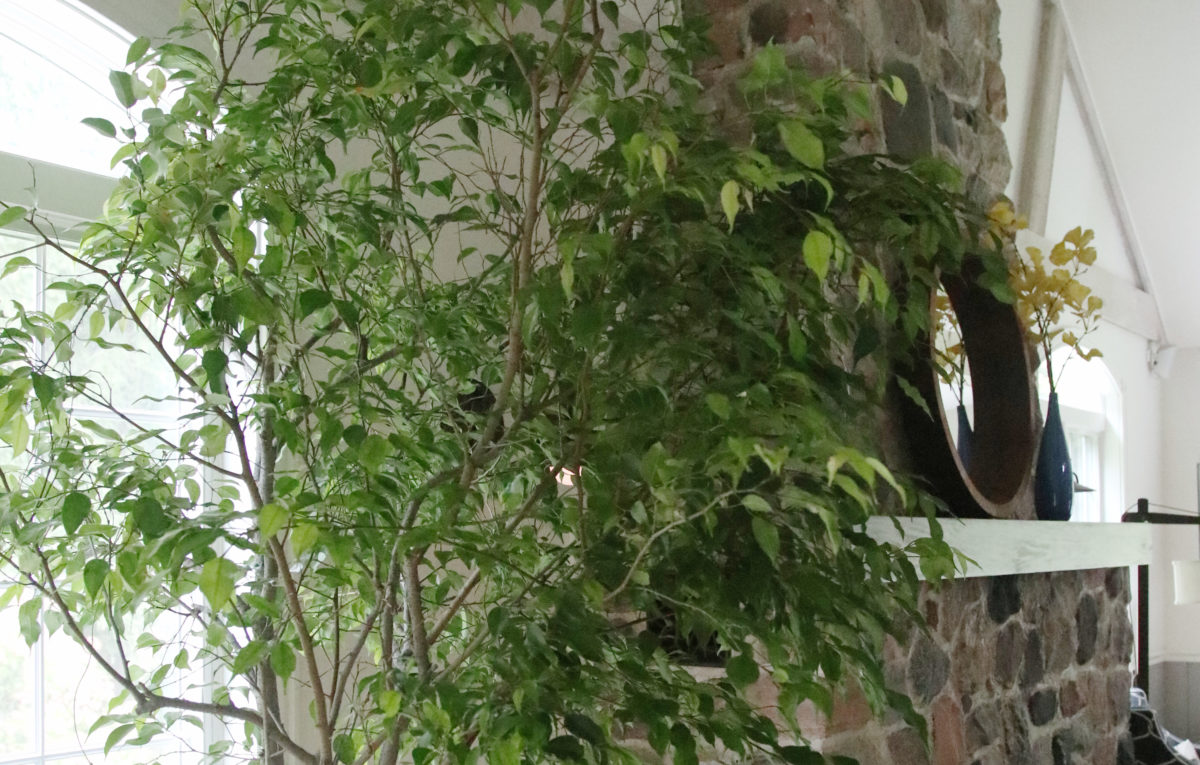 The monarchs are making their way south, and the hummingbirds are all but gone. The geese overhead seem to be pointing south and all this migration can only mean one thing: It’s time for the annual houseplant migration.

I like to think of myself as a good gardener, but I am a lousy caretaker of houseplants. If it weren’t for the renewed vigor my houseplants get from spending the summer outside, I’m certain they would all be dead. I don’t water them enough (overwatering has never been my issue), I forget to start fertilizing again in late winter and I’m usually late on catching onto any issues they might have. 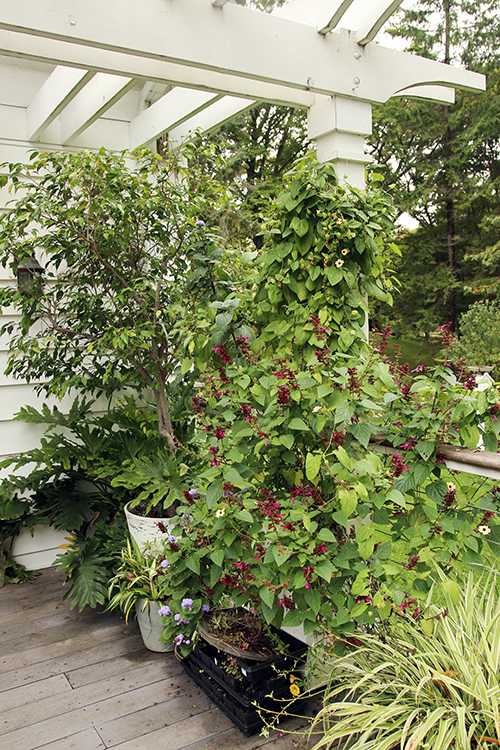 The house plants spend their summer in a corner on the deck, giving it a bit of a jungle feel.

But I like having them around, so make sure to get them inside before frost gets them in fall. Ironically they get better care during the migration than they do at any other time of the year.

The migration starts a couple weeks before the plants get moved inside. This is when I start giving the foliage a strong spray with the hose. About a week before they come in, I water them really, really thoroughly, almost to the point of flooding them. The idea is that I flood out any bugs that might be in the soil.

I’ve never had a problem with bugs inside using this method but if you are really worried about it, look into Amy’s debugging strategy for houseplants.

I like to tidy up plants outside where I can make a mess where it’s easy to clean them up. For the spider plants, of which I have two, I start by cutting off all the babies. This probably makes me some sort of plant monster, but it’s my truth.

After that I pull out all the dead bits and on the one plant that seemed to have been chewed by something, I cut out any unsightly leaves. 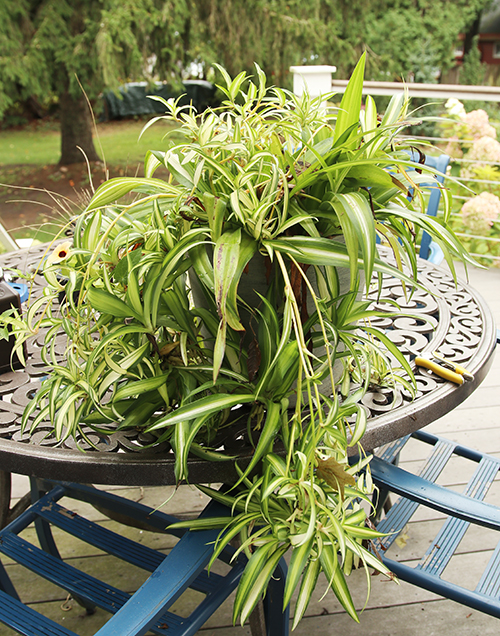 By the end of summer, one of the spider plants was rocking a shaggy ‘do. 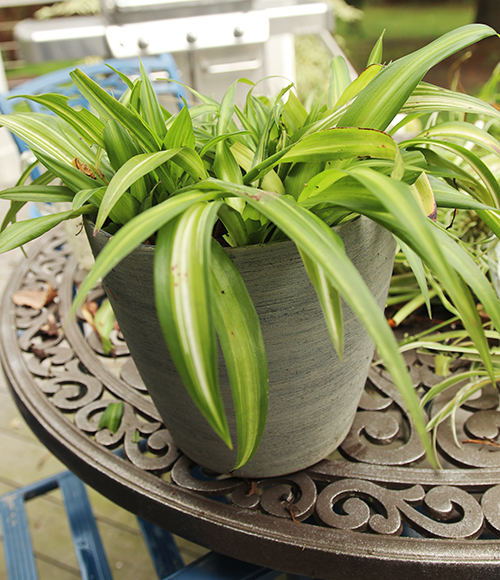 Here’s what it looked like after I cut off all the babies and pulled out all the unsightly bits.

Fun fact (that I’ve shared here before): I bought one of my spider plants the day I moved to college. I’m not going to tell you when that was, but let’s just say it was a different millennium.

The philodendron gets a pretty rough treatment. I cut off a good amount of leaves just to manage the size and clean off any dirty bits. Other plants get the same treatment: prune for size, pull out unsightly leaves, generally try to make them less disreputable. 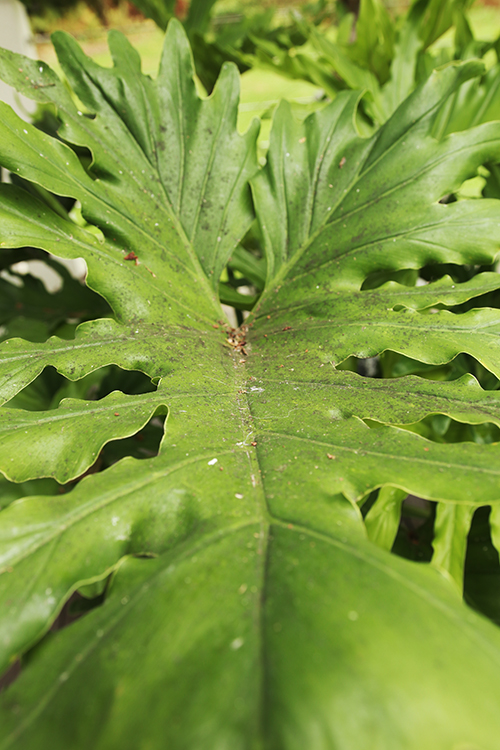 Philodendrons collect a lot of dirt in their leaves during the summer. All of this mess gets cleaned off before they come inside.

But the ficus is a different story. This is an important plant. It was grandmother’s who kept it in her sunny living room for years. Festooned with a few lights and some red ball ornaments, it served as her Christmas tree for a few years. When she died, I became its caretaker.

Last year it got a bad case of scale, which I treated with some success, but it bounced back well when it got outside. But when it came time to clean it up to bring it in I noticed some unsettlingly issues. Some (um, many) of the leaves were covered in black … mildew? Dirt? I don’t honestly know what it was but in most cases the leaves didn’t seem to show issues beyond that. 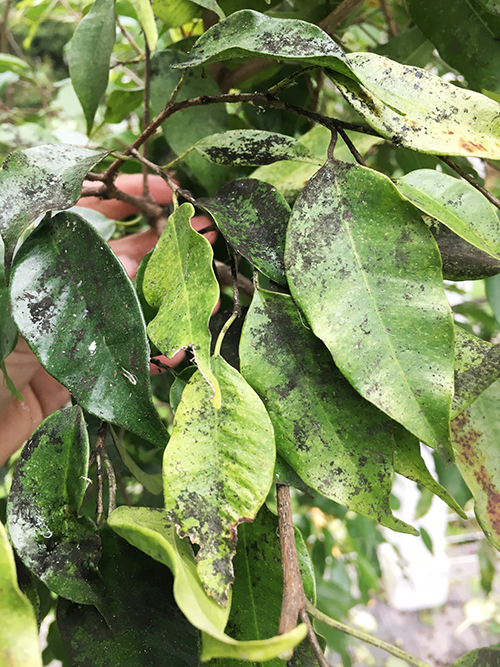 Many of the ficus leaves were not looking good.

Whatever it was, I cleaned it off, leaf by leaf, and it took a very long time. I think it may have been dirt that stuck to leftover honeydew from the scale infestation. In any case, I took an extra step of treating the entire enormous plant (um, tree) with insecticidal soap.

The ficus in its winter home in the living room, the only room with a high enough ceiling to accommodate it.

The ficus has to live in the living room these days because its too tall for the room where the rest of the plants live. Getting it through doorways is a little bit like stuffing yourself into skinny jeans after a long winter, and I had to prune it even more than I planned to.

deck ficus houseplants
by Erin @ The Impatient Gardener
8 Comments
previous post: Fall cleanup with a healthy dose of cozy
next post: The first frost, the last harvest and a big project nearly complete