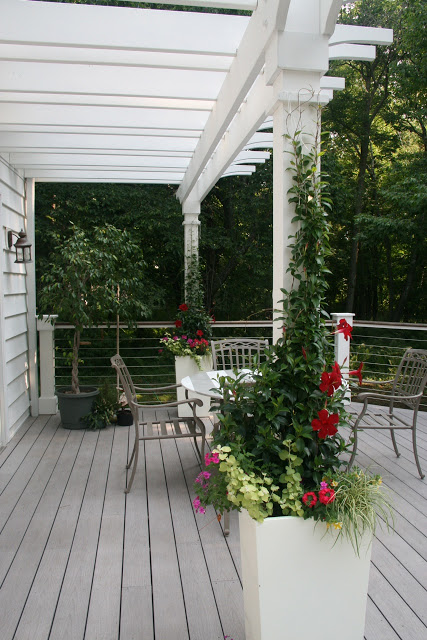 Symmetry scares me a little. It especially scares me in the garden, because true symmetry is almost impossible to attain when you’re growing things.

That’s probably why I rarely (if ever) do matching containers. There’s just too darn much pressure to make them look the same. But this summer I decided to go for it, because frankly, there was no option.

I spent a lot of time (not to mention money) finding the right pots for the containers on my deck and an equal amount of time figuring out what to fill them with. And I was thrilled with how they turned out.

For awhile, all was going well. The northern pot (the far one) wasn’t growing quite as quickly but I expected that. And then, a few weeks ago, I noticed that many of the leaves on the mandevilla vine were turning yellow. Then they were falling off. It had all the signs of overwatering.

I have to admit, I was a bit concerned about that because of how I planted them. To save on potting mix and lighten up the containers I filled up a garbage bag with broken up pieces of styrofoam to fill up half the container and then filled the rest with potting mix. I can’t remember what kind of potting mix I put in (it wasn’t my usual Fafard 3B Mix that I like to use as I ran out of that), but I was gavin a really hard time keeping it moist, so I was concerned that perhaps I had created a pool of water sitting on top of the garbage bag and rotting the roots.

So I waited a few more days. And the leaves kept falling off the mandevilla. All of the other plants were doing OK, and the other matching container was looking great. I figured I had nothing to lose and took drastic action.

I took all the plants out of the container. I dumped out all the soil, pulled out that styrofoam, refilled it all with potting mix and replanted everything. There was no pool of water. There were no rotten roots. There was no explanation for the mandevilla’s decline. I’ve done a bit of googling and it seems that mandevilla (Diplandeni) can be prone to something called cerscospera, which is a foliar disease. That doesn’t seem quite right either because the leaves were never wet, although this one did get less sun than the other container. 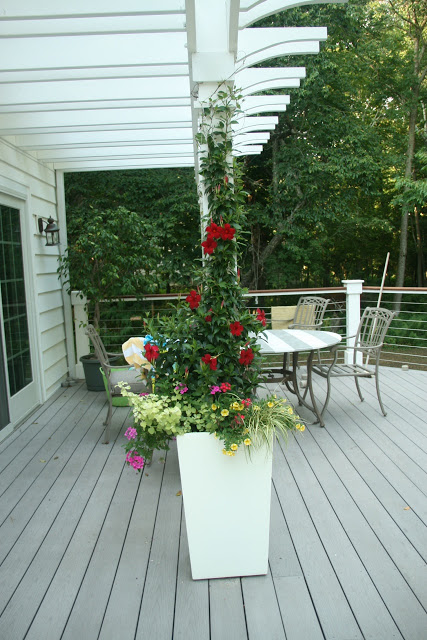 And in doing so, I put the last nail in the coffin that was my matching containers. The mandevilla never recovered. Most of the other plants, which had been doing fine, died.  There’s really nothing to do now other than dump it and try again next year.

So much for symmetry.