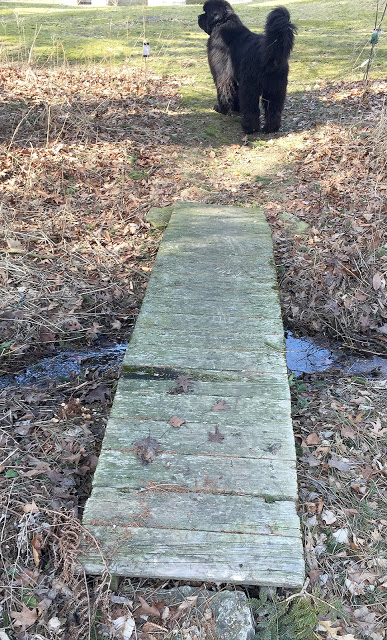 In preparation for the first day of spring, we spent some time over the weekend walking through our still partially snow covered yard taking an assessment of what needs doing this year.

At the top of the list is replacing the bridges Mr. Much More Patient built over the creek the year we bought the house 15 years ago. He used cedar for the boards but they seem to have fared no better than the pressure treated structural timbers over the year. The whole enchilada is rotting. I don’t think we can complain as they’ve lasted a decade and a half and it will be a good excuse to make them a little wider. Not only does my two-wheel wheelbarrow barely fit on it (and it has careened off the side on more than one occasion), but there is a very small chance we may have a garden tour at the house next year and I’d like the bridges to be a touch wider for guests just in case.

I also took the time to make a few notes about areas of the garden that I’d like to do some rearranging in, particularly in the sunny part of the garden north of the house. This has been the default garden for things I’m dividing or don’t know where to plant, but I’m feeling the need to do a little fixing up in that area.

While walking to that garden we looked up and noticed the the chimney has mortar falling out all over the place again. We love that chimney but it has serious issues. We’ve had two people out over the  years to fix it. The first one was OK but sloppy. The second one, I think, actually lied about even going up there to do anything. So now we find ourselves having to find a mason and I’d like to get that done sooner rather than later because they always trash the garden.

The bridges aren’t the only thing rotting in our yard. The main raised bed garden is completely falling apart. We knew this would happen. We built it using cedar posts and untreated pine. In its eighth year, the pine boards are bowing terribly and rotting everywhere. The ones on the north end have crumbled. What we didn’t expect was that the cedar 4×4 posts have also rotted. Is cedar not like cedar used to be? It seems like it’s failing quickly.

The solution is a patch job. We’ve bought some corner brackets to hold it together and we’ll have to replace the boards on the north end with something. Even scrap wood would be OK. Mr. Much More Patient has some plan to get the screws to bite into the rotten posts.

The reason we’re not doing a proper fix is that I’m very excited to report that the plan is for a complete redo of the veggie area next year. The dream of a potager is one I’ve been trying to shake for a few years but it just won’t go away. So my plan is a new set of raised beds, room on the edges for growing fruit, a large fence around the entire thing and a small seating area to soak up the sun in the center. On the rough sketch I have there is also a faint dotted line on the back of the fenced-in area that says “Future greenhouse.” I should be so lucky, but it doesn’t hurt to have a plan just in case.

This is also the time of year when I make notes for future plantings. I stuck a few sticks here and there around the garden to represent possible locations for trees, which helps me visualize the location from various spots inside, as well as judge the amount of sunlight an area gets throughout the day, something I’m generally terrible at (optimism make me see sun that’s sometimes not there).

These are difficult days for a gardener. There is a lot of pent-up desire to garden but no ability to do so. This kind of planning helps. In fact, maybe gardening is like proms and parties in that sometimes the anticipation is even better than the main event.