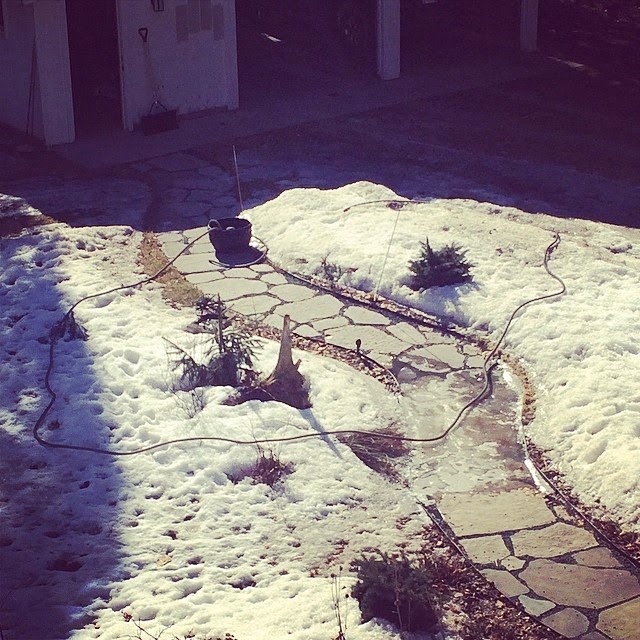 I don’t think it’s any secret that there is a lack of quality gardening television shows available in the U.S. There are some, of course, and two that come to mind are The Victory Garden and P. Allen Smith’s Garden Home, both on PBS.

Although I have the DVR programmed to record every one of these I can (which means a lot of old, fuzzy episodes of The Victory Garden recorded from some channel called RLTV that runs a lot of ads for how the elderly can learn to use computers), I cannot manage to quench my thirst for gardening programming.

And let’s be honest, at this point it’s a matter of keeping my sanity. If you follow me on Facebook or Instagram, you saw what I did this weekend.

That’s my attempt at redefining that garden bed that crosses the path on top of a foot of snow with a half frozen hose. With another inch of snow added last night, clearly I need to get my gardening frustrations out somewhere.

I watch a lot of television shows on my iPad. That way I can watch while I’m cooking, cleaning, painting, drying my hair or just walking around the house (not recommended; ouch). So I’ve been searching for gardening shows I can stream on my iPad.

I started at Amazon Prime. There aren’t a lot of shows to be had as part of the Prime program, but I did find several old English gardening shows that were somewhat interesting. The best was “Secret Gardens of England” with Alan Titchmarsh. Apparently, in England it’s not uncommon for somewhat regular gardeners to open up their gardens to the public a few times a year for a small fee (which is often donated to a charity). This program highlights a few of the lesser known gardens and is quite interesting because these gardens are for the most part relatively small properties with unique growing conditions rather than huge estates.

Another Amazon Prime show I watched was a full season of “The Great Gardens of England,” which is about the same as “Secret Gardens” but features more popular, grander gardens. 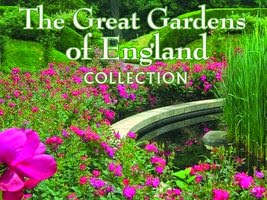 What I found so interesting about both shows, but particularly “Secret Gardens” is that the most interesting gardens are a partnership, usually between a married couple, where each person has a specific role (and that doesn’t mean that the man is relegated to hole digger all the time). I’m beginning to suspect that the checks and balances that come with gardening with another person create a much more beautiful space.

Anyway, you can only watch old English ladies in frumpy dresses stroll around gardens for so long, and I’d about had my fill of that.

Next I went to the PBS app where I found access to some episodes of regional gardening programs. “Volunteer Gardener” from Tennessee was pretty good as was one from North Carolina, but when one of them flipped to their regular segment filmed at Home Depot where a woman in an orange apron explained how to make a container that consisted of a spike, a geranium and ivy, I decided I was done with that too.

While I was searching for programs on my laptop, I landed at Gardeners’ World on BBC. I used the Hola extension that makes your web browser look like it’s coming from a different country (the same one I used to watch Sarah Richardson design shows on HGTV Canada) to be able to watch the three episodes of this show that were available online for viewing. Holy smokes, they blew my socks off.

This is quality programming, people. The cinematography (I think that’s the right word) is unbelievable. It is filmed so beautifully with the shots often starting closely zoomed in on a plant and panning out to catch the frame in the background. The segments are a nice length and very interesting.

What I like most though is the presenters. They have dirty hands from digging in the dirt. One of them, Carol Klein, is this exuberant woman who is constantly chatting and smiling and has had dirt on the knees of her blue jeans in every segment. In other words, they are real gardeners. I love it.

One episode had a segment on Boxwood blight and was filmed in presenter Monty Don‘s garden (as many segments are). His garden is a beautiful formal one, with perfectly trimmed boxwood hedges creating the structure. One area was decimated by Boxwood blight, so the segment highlighted what to do about it to try to keep it from spreading throughout the garden. The quick answer is to cut off the affected plants, dig out the roots, burn it all and cross your fingers. So I was thinking to myself, what is this guy going to do? He just lost an entire hedge from around one area of his garden and now it won’t match the rest. But while he was cutting it down (and mentioning that he had planted the boxwood more than 15 years earlier when his children were young) he said he was excited about the possibilities of what he could do there now that he wasn’t limited by the hedge in that area. You have to admire that attitude.

In search of more episodes of Gardeners’ World, I landed on YouTube where wonderful people have (probably totally illegally) posted excellent episodes of the show and its specials. Gold mine!

One special that I really enjoyed was called “The Science of Gardening” with the aforementioned Carol Klein. It was a really fascinating look into exactly what the title suggests, but in a very approachable and easy-to-understand manner. The section on soil structure was particularly interesting to me.

I also watched a special on the 2013 Chelsea Flower Show. For some reason I always find it to be hard to find information and images from the show, which is surprising since it’s pretty much the biggest thing going in the gardening world. This was a great look at the world-famous event. Interesting tidbit: Gnomes have been prohibited from displays at the Chelsea Flower Show basically forever, but in 2013 they were allowed and later auctioned off for charity.

Youtube is one of those places where it’s hard to search for shows, but you usually find them by looking at the suggestions after you’ve watched a video. So I’m hoping I’ll continue finding more programs to tide me over until I can get in the garden.

Do you have a secret source for great gardening programming?

I’ve updated the “Favorites” tab at the top of the page with links to seasons and episodes of some great television shows on Youtube to help you find some of them a little easier.