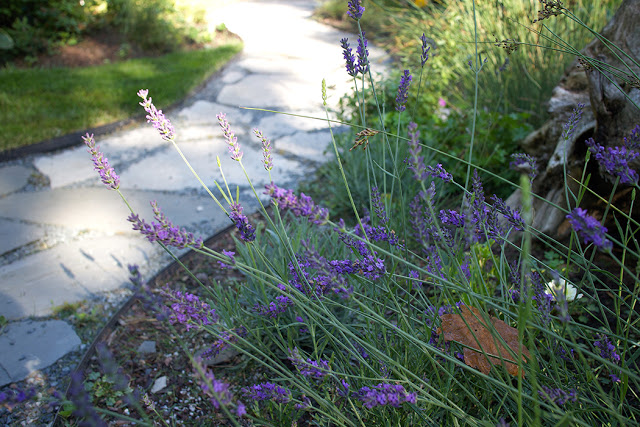 There is something rather momentous going on in my garden right now: Lavender is blooming.

For those of you who successfully grow lavender, this probably doesn’t seem like something worth dedicating a blog post to. With lavender, it seems, you either have it, or you don’t. I’ve struggled with growing lavender for years, which is why my path is lined with nepeta, a hard-working, unneedy plant that estimates the look of a lavender lines path in a slightly less refined manner.
After giving up on lavender, last year I was persuaded to try a new cultivar called ‘Phenomenal,’ which was said to be more hardy than other varieties. Hardiness, when it comes to lavender is a bit of a misnomer I think. Given perfect soil conditions, I think there are a lot of lavenders that would survive our zone 5 winters. Hardiness, when it comes to lavender, has a lot more to do with drainage; they absolutely will not tolerate sitting in cold, wet soil. ‘Phenomenal’ seems to deal with this situation better than others.
Lavender also likes rather poor soil and when I planted ‘Phenomenal’ last year, I planted it in a mix of bark mulch and gravel. That’s it.
The three plants I planted last year didn’t look so great in spring, but thank goodness I was patient with them, as all three have rebounded to some degree. I added another two plants this year and planted them in mostly gravel with a touch of soil. I also mulched the soil around them with chicken grit, which is a stand-in for a fine gravel and what I’ve been adding to most of my container mixes lately.
The difference between last year’s plants and this year’s is interesting to note. Last year’s plants are somewhat sparser and greener but they have shot up gorgeous flowers that last and last. This year’s plants have the blue foliage you envision when you think of lavender and are bushier, but that’s no indication of what they might look like next spring.
There is a certain satisfaction that comes from finding success with a plant that has previously proven to be an expensive addition to the compost pile. We gardeners must revel in these victories.
garden lavender phenomenal
by Erin @ The Impatient Gardener
12 Comments
previous post: YET ANOTHER BLUE DOOR
next post: FRIDAY FINDS