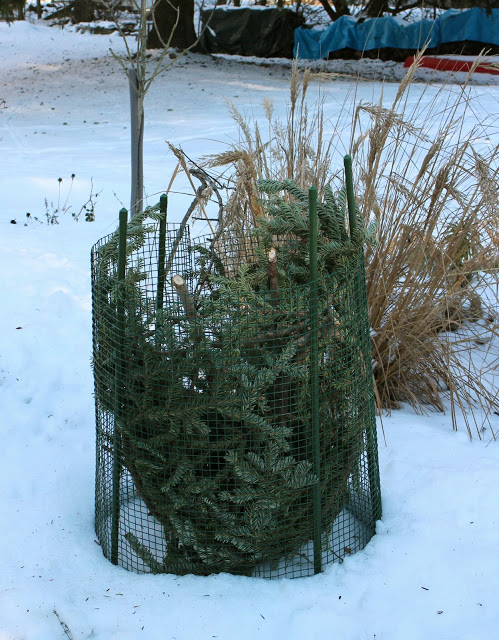 Gosh, it’s about time for a gardening post, don’t you think?

A lot of people think that it’s the cold that is most harmful to plants, but really it’s the continual cycle of freezing and thawing that does them in. If it would just freeze in late November, get a nice thick blanket of snow in December and then stay like that until it melted in March, most plants would be quite content. But that’s rarely what happens, and it’s even more rare these days when temperatures seem to fluctuate wildly. (It will be over 40 degrees tomorrow up here in southeastern Wisconsin, for instance.)

So some plants need some insulation, mostly at the roots. The best way to manage this is to give the root zone a good mounding of mulch (I love chopped up leaf mulch for this) very late in the season (like late November in our parts). But if you’re like me, you might have brushed off that task when it got cold.

It’s not too late to help your plants though. And even though the leaf mulch pile is pretty much frozen at this point, I happened to have just the right thing to use for insulation handy: the Christmas tree.

I cut most of the branches off our tree and stuffed/laid them around the more sensitive plants in the garden. In general, I only take extra steps at protecting plants that are either borderline hardy, relatively new (and therefore haven’t had a chance to get as established as I would like) or really expensive/slow growing (because I don’t want to have to replace them.)

I also often cage these plants to protect them both from wildlife and the local petlife. Our dogs have been trained to stay out of the garden and they don’t dare step foot in it for most of the year, but all bets are off when it snows. I can’t blame them too much as it’s difficult for them to delineate the borders of the garden and honestly I don’t worry about it too much once the ground is frozen, but the shoulder seasons are a bad time for big dogs to be tromping through the garden, stomping plants and compacting the soil. They also routinely bound through the garden, so I protect small or delicate plants with cages just to keep them from running them over.

I put the cage (just hardwire cloth bent around a few stakes) around the ginkgo (gingko biloba ‘Gnome’) in November, but I forgot to come back and stuff it with leaf mulch. So when I cut the Christmas tree apart, I just filled up the cage with soft branches. It won’t work as good as the leaf mulch would have, but it will provide some insulation and a little wind protection too.

Along the path you can see a couple other things I did for winter. First of all, I put up stakes along the path so we’d know where it was when we are shoveling or snow blowing. It’s been a long time since we’ve had a snowfall that was big enough to cover the entire garden, but when it does happen it can be very hard to figure out where the path is and where the plants are. It would be a disaster to run the snow blower over the garden accidentally. On the left you can see that I wrapped the new Japanese maple (Acer palmatum ‘Mikawa Yatsubusa’) in burlap, held up by a square tomato cage. I really love that little tree but I’m worried about it because our zone can be borderline for Japanese maples and because with the crazy summer we had, it had set (and still has) huge leaf buds in October. I did this same thing with the ‘Orangeola’ Japanese maple for its first several years and it worked so well that it is now too big to cage. Although I had put some leaf mulch inside the burlapped cage, I also threw some pine tips in there for added insulation.
On the right side of the path you can see another cage, which I just put up this weekend (whoops). That is to protect the dogwood (Cornus alternifolium ‘Golden Shadows’ ) that I replanted this spring. Unfortunately I got to it too late as all of the ends of the branches were nipped by deer. I will trim them back to a healthy bud or branch in late winter or early spring (usually March) and hopefully all will be well.

Some plants are left to fend for themselves. Picea englemannii ‘Blue Magoo’ (which is growing painfully slowly, considering it’s supposed to end up at 8 feet tall) seems to have established itself well in the past two years, so other than throwing a small amount of leaf mulch around it, I didn’t do anything special. I see from this picture that I need to loosen the twine holding the leader to the stake because the trunk is actually a little curved. 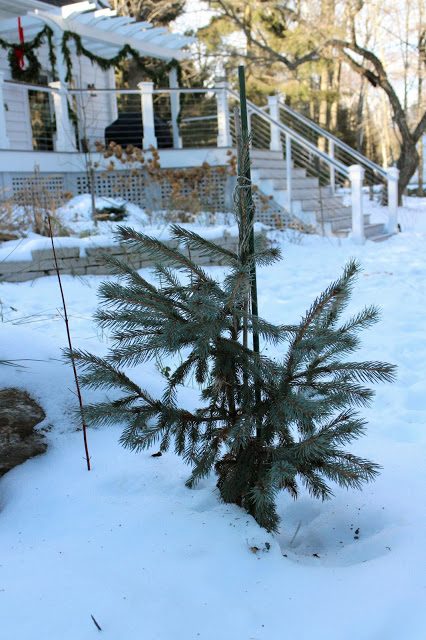 Most perennials in my garden are left standing through winter. Studies have shown that plants are more hardy when they are left standing through winter. The downside to this is that it’s a lot of clean up to do in spring when you’re already busy in the garden. I like to see something in the garden during winter so this clematis, which works its way to the front of the house every summer is allowed to stand. It’s a group 3 so in early spring when I do my clean up I will cut it back to the first bud, usually about 6 inches above the ground.

A local commercial perennial grower told our master gardener group that he cuts everything back in fall but lets all the plant material lay where he cuts it to act as a natural mulch. I think that’s a pretty clever idea if you’re inclined to cut back your perennials in fall.

The one exception I make to the “Let it stand” rule is with free-seeding perennials like Rudbeckia. I make sure to cut those back and remove the plant material early in the process so they don’t seed all over the place. Anyone want some Rudbeckia? Trust me, I have some for you! 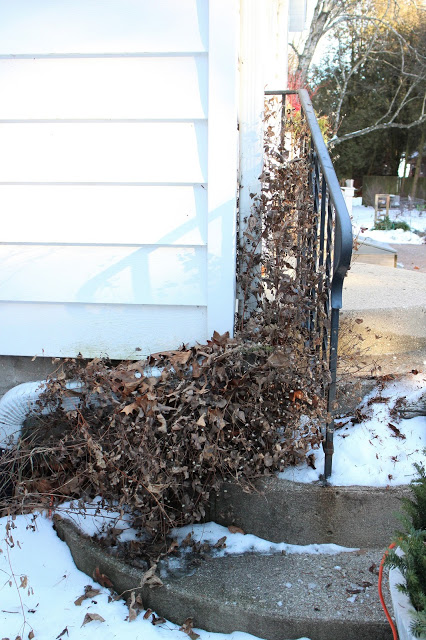 I’m trying something new to protect the trunk of new trees this year. I put a foam pipe insulator around the trunk of the fringe tree (Chionanthus virginicus).  It’s not about keeping it warm, rather it will keep little critters from gnawing on the bark. 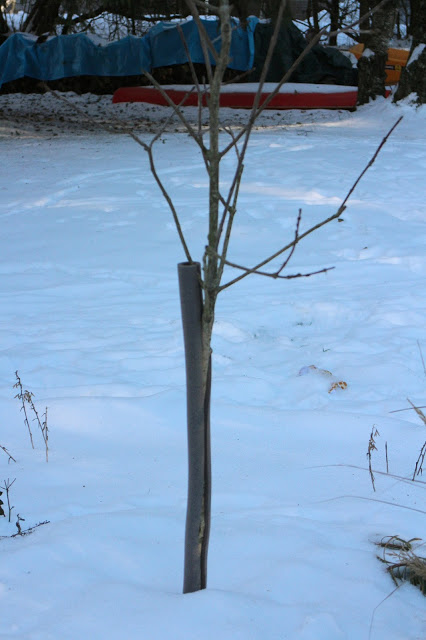 Here’s what rabbits did to one of my Japanese maples (Acer japonicum acontifolium) a couple years ago when I left the trunk unprotected. The new fringe tree has such a piddly little trunk that a chewing rabbit could do a lot of damage.

One last comment on winter care of plants: It’s almost always better to just let snow lay on plants rather than try to knock it off. This is Blue Mohawk soft rush—a great grass from Proven Winners that I really am loving—which will be cut back in early spring along with the rest of the grasses, but the same holds try for shrubs. You’ll often do more damage to shrubs by trying to knock off or brush off snow than if you had just left it. There are some exceptions to really icy, heavy snow, but that’s usually a last resort, where you have nothing to lose by trying to knock it off because the weight of the snow could bring it down on its own. 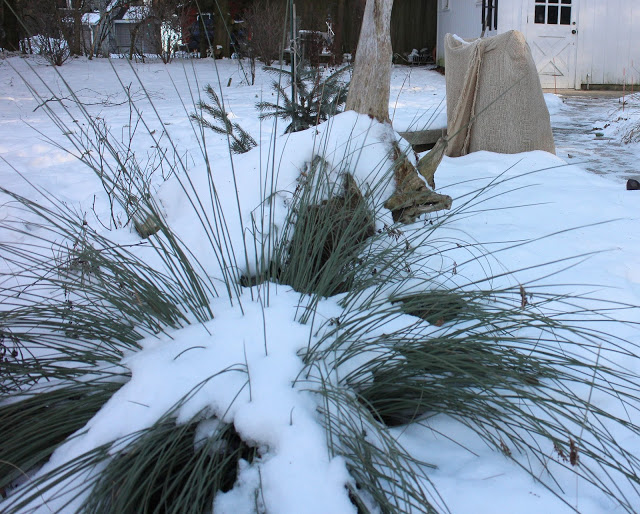 How did you prepare your garden for winter? Did you do a better job than I did actually taking care of it before winter was fully upon us? What creative use for your Christmas tree do you have?

dogwood japanese maple path winter
by Erin @ The Impatient Gardener
1 Comment
previous post: NOT GOODBYE, JUST UNTIL WE MEET AGAIN
next post: Looking for a little help from my friends