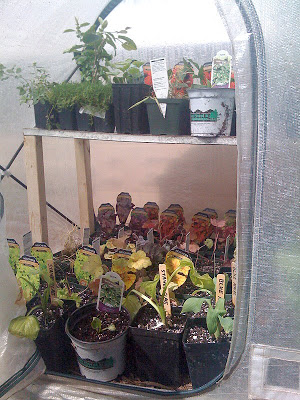 My co-op buying has reached epic proportions this year. Through the co-op I have access to oodles of great perennials at great prices. The only catch is that they are plugs—what most local nurseries buy from wholesalers, then pot up and grow before selling them to the public, for up to four times what they paid. I don’t begrudge nurseries that money at all. It’s hard work to pot up all those plugs, and care for them until they are saleable. Plus, pots, dirt, heat, fertilizer and help doesn’t come cheap. But I want in on that action.

So I’ve started buying a lot of perennials through the co-op. It’s the only way I could afford so many of them. When they come I pot them up and grow them out in this thing I call a greenhouse. They call it a Flowerhouse, but make no mistake, it’s a glorified pop tent.

I’ve got most of what I’ve purchased this year all potted up and settled in. The only problem? I ran out of room in the greenhouse, so a few thing are just going to have to tough it out in the big bad outside.

Here’s a close up of what things are looking like in there.

And here’s the whole “holding area.” The larger pots are hostas I bought through the co-op last fall. I buried them in the ground, covered them in a bunch of leaf mulch and they ALL made it. I’ll plant them in the new shade bed this summer. This is also the location of the aforementioned “pit of despair.” Dealing with it is on this weekend’s agenda, but today was rough, and frankly, it’s lower on the priority list so we’ll see what happens tomorrow. 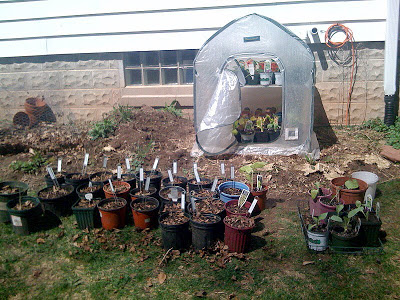 co-op greenhouse pit of despair
by Erin @ The Impatient Gardener
2 Comments
previous post: A big weekend
next post: How’d I do?