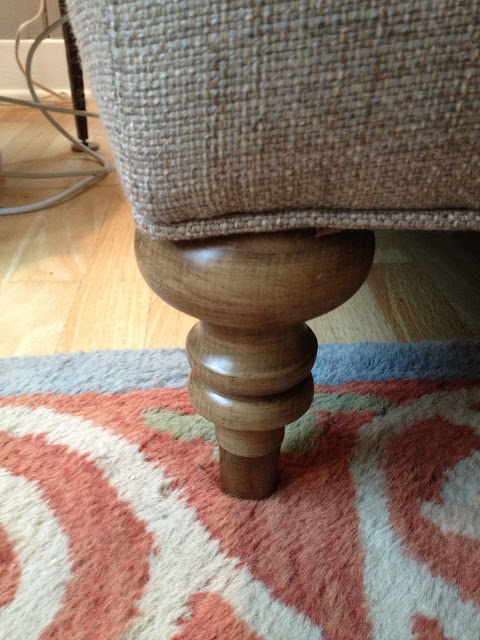 Sofas are sort of funny, aren’t they? I mean, it’s just a piece of furniture but they are a big deal. People agonize over sofa decisions, but rarely do they feel that same kind of angst when it comes to choosing a chair or side table.

I suppose that’s because usually they are the most expensive piece of furniture in a room and no one likes to spend a lot of money on something they end up hating. Also, chairs and side tables come and go, but sofas tend to hang out for a long time.

It’s interesting to look back at my life in sofas. I’m not counting the futon I had in college because futons should never, ever be considered furniture. They are actually torture devices. They are uncomfortable to sit on, hard to get up off of (even when you’re young and in college), ridiculous to try to sleep on and impossible to move, given that they weigh a ton and constantly unfold. Plus, most futons are pretty gross, because let’s be honest, you only really sleep on them when you are drunk.

So not counting the futon, I’ve had three sofas and the fourth recently arrived (I showed you a little sneak peek here).

The first sofa came to me when I was in my second “grown-up” apartment. I was probably a year and a  half out of college (the futon apparently followed me to my first apartment because I don’t recall a real sofa there) and had just moved from a small daily newspaper to medium-large daily owned by the same company in a different city. As a young reporter I was making essentially nothing so the priority was to pay the rent and the electric bill and have enough left over to buy gas to visit my then-boyfriend (now Mr. Much More Patient). My mom found me a FREE COUCH! When you’re in that position, free is a lovely idea, but is it just me or is the idea of used upholstery from random people just a tad bit creepy? If you said no to that question let me throw this out there: What if that couch was free because the person who owned it was dead (and may or may not, for all you know, have actually died on the couch)?

But I was poor and free is free, even if it comes in a very low orange and blue plaid fabric-covered, as what came to be known as the “Dead Guy Couch” was. I covered in an navy blue sheet and then pretty much never sat on it.

I kept the Dead Guy Couch for the two years or so that I lived in that apartment (apartment No. 2 if you’re only counting apartments after college or apartment No. 4 if you count the ones in college, which you probably shouldn’t because I’m not sure they were actually habitable, particularly the one where I actually slept in a room out the back door of the house that had been a porch that someone stuck walls around and a wall-mounted propane heater to the wall). After that I moved, briefly, to New Zealand, so I had to purge or store a lot of stuff and as I recall, the Dead Guy Couch did not make the move to the storage unit.

When I came home from New Zealand (I can’t tell you what kind of couch we had in our cute downtown Auckland apartment but I recall it being uncomfortable), the now-Mr. Much More Patient and I got a not-terrible apartment together and although between the two of us we had five toasters, we had no couch. And that’s how we bought our first couch (this is a big moment in a relationship, let me tell you). And how did we buy that? One Saturday afternoon we went to a big-box furniture store, sat on three couches, said “Oooooh, look at the pretty red one,” and bought it. It was rather hideous. The fabric was a cheap cotton that stretched like crazy so it always looked frumpy, the loose back pillows were remarkably uncomfortable, it quickly turned pink with the smallest amount of sun exposure and it was HUGE. The arms were easily 15 inches wide, no lie.

It’s funny, the only photos I can find of that couch have the dogs on them, which seems strange because I thought we always had a “no dogs on the couch” rule. Apparently not. This is probably why it’s so darn hard to keep Rita off the couch now (Hudson can’t get up there anymore so I find this picture of him all curled up with his head on a pillow extra sweet). 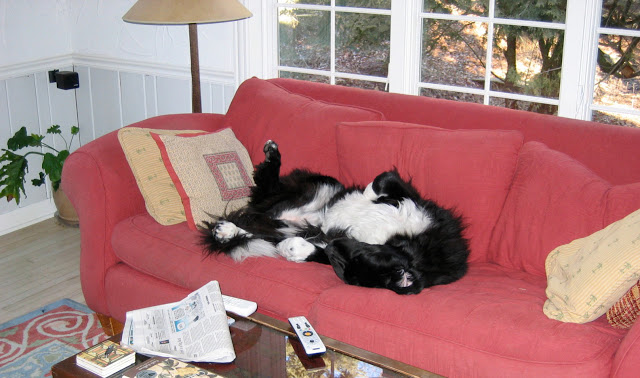 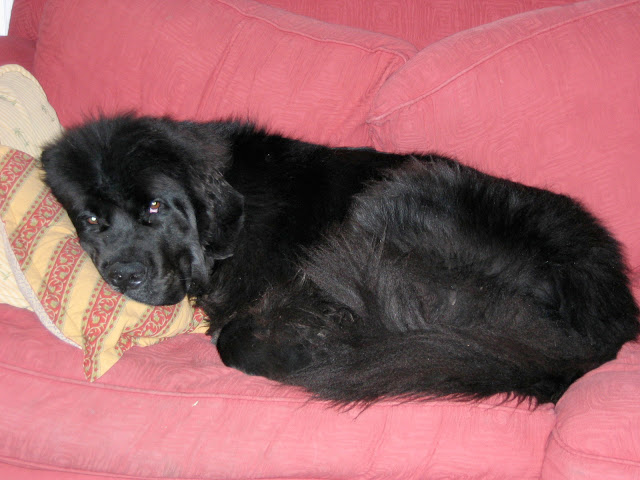 When that sofa had all of the life sucked out of it, we got our first “good” couch. I spent a lot of time looking for it and even longer looking for the right fabric for on it. All in all, it was a success. I loved the lines of it and the fabric wore remarkably well, save for a few pulls in it. It faded a little bit, but not badly for a red couch in front of a window. Two things went wrong though: 1. The cat learned to love sitting on the bad cushions, which pretty much turned them to mush so only vigorous fluffing would make them stand up again, and 2. I think part of the frame might have broken. There seemed to be a bottomless pit in the hole where our butts most frequently were. And both of those problems probably could have been fixed but it turns out, I got sick of red. After almost 15 years of red, I just was done. And I was really sick of the French country-ish color scheme I had going on. I think it still looked good, I just got sick of it. 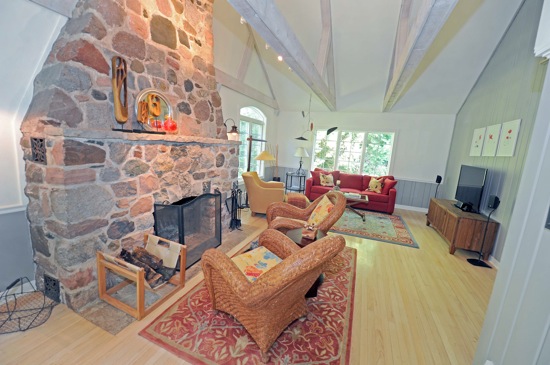 It was time for a big change.

And that’s how I ended up with my first neutral-colored couch. I’d call it a light greige, but it’s a tweed-type fabric with a small fleck of silvery blue in it (undiscernable from anything beyond microscope distance), chosen for its durability (I would have loved linen or velvet, but I was worried about how they would wear with what we put a sofa through). With its English arm and scalloped back, t’s far more traditional that I was originally looking for, but I absolutely love it. It’s very comfortable (I’m so happy to be finished with back pillows) but I do worry that the cushion configuration only allows you to flip them over rather than rotate all of them. I like to flip and move cushions a lot to keep from getting “butt marks” where you sit most often. 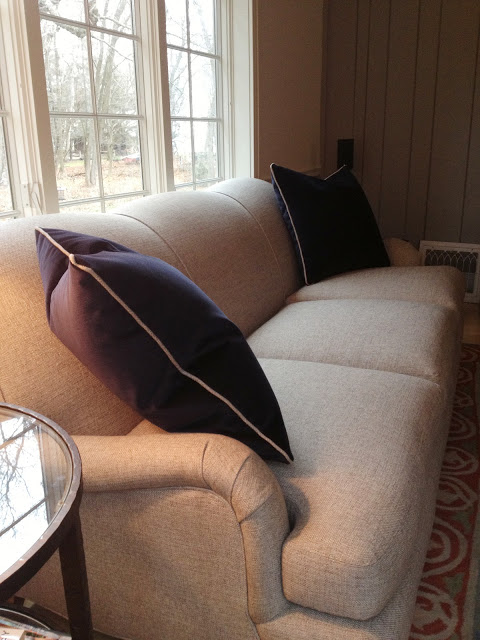 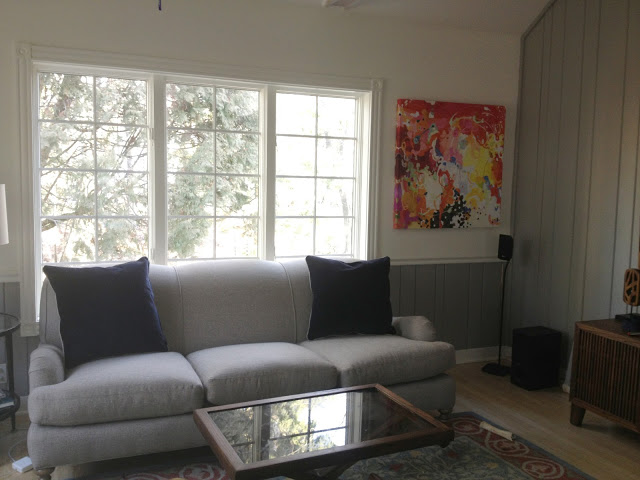 A new rug should be on the way and I’ve started making some throw pillows to brighten it up. It was a big purchase, but I only had about two minutes of regret before I fell totally in love.

What’s your history with couches? Do you change up the style and color or have you been lucky enough to find one you will always love and just reupholster it? I’m so hoping that’s what this couch will be, but time will tell.

P.S. Don’t worry, more Christmas stuff is coming to the blog. I’ve had this post sitting in the drafts folder for two weeks now so I thought it was time to share it. While a lot of blogs are powering down for the next several days, I’ll be posting lots of Christmas stuff. I’m just late. Because I haven’t done it yet. There, I said it. But it’s coming … honest!