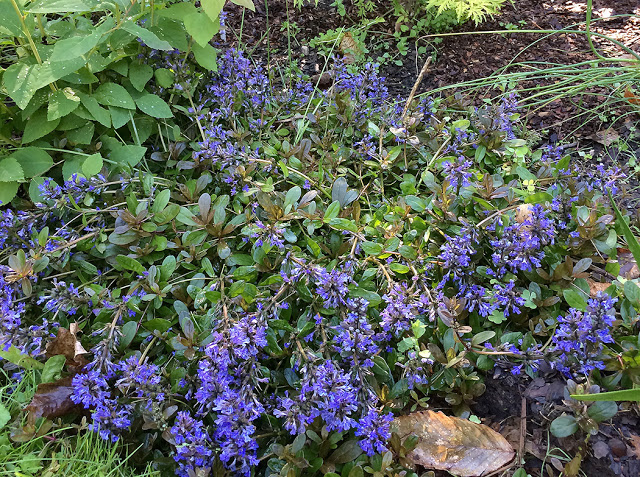 I’m nearing the tail end of the major work in the garden, which now consists of pulling out weeds by the handful and mulching. I’m certain I’ve weeded at least 10 wheelbarrows full and the mulch situation is completely out of control.

I’m fussy about mulch. My favorite is a very fine pine bark with pieces a half-inch or less and it’s difficult to find. And I buy it by the bag. I know, that is not at all good from an environmental standpoint and I’m not proud of it, but the fact is that there was almost no cost savings buying in bulk because I would have to pay an exorbitant delivery fee on already pricey mulch. Also, I’ve been doing this weeding/mulching game for at least a month, if not more and I don’t want a pile of mulch sitting in my driveway for a month.

I bought a pallet of it: 50 bags. And I ran out, so now I’m using icky giant wood-chunk mulch in the shade garden because that’s all that’s left at store.

All of this reaffirms my goal to cover my garden (or most of it, anyway) in groundcovers. If you consider a groundcover to be a plant that spread readily, then I have a lot more grouncovers in my yard than I’ll discuss here. Ostrich ferns run rampant in the woods and certainly fit that description. Bigroot geraniums also count and I’m working to establish more of them throughout the garden.

But the groundcovers that I most often think of are more creepy crawly. I let them grow with reckless abandon and I just pull them out by the handful when they try to “eat” a plant I want to thrive or get to thick and messy looking.

These are four I have spread around the garden and I hope they take over. Groundcovers equal less mulch and less weeding and right now I’m all about that. There are some common groundcovers you won’t see mentioned here and in some cases it’s not because I haven’t discovered them. Rather it’s because I’ve tried them and they didn’t pass my no-maintenance-at-all-required test. Creeping thyme is lovely but after planting it year after year, it became clear to me that it’s only right for a well-drained, full sun spot that is never walked on. Irish moss is lovely and I have small patches of it around the garden, but again, any kind of foot traffic was the death of it. It’s also very difficult to pull the errant weed sprout out of it. The four groundcovers I’m listing below are, for me at least, about as foolproof as they get.

For about a month starting in late May in my garden, Ajuga has pretty purple-blue blooms that are a nice touch of color at a time when little else is blooms but the greens are really popping. I like ‘Chocolate Chip’ for it’s smaller leaves but there are a lot of Ajuga cultivars that are interesting. When the flowers fade, as they will soon, you’re left with a carpet of dark green to purple foliage that does a good job showing off lighter colored foliage and flowers. It doesn’t spread as fast as I wish it would, but I’m also not great about dividing big clumps and spreading it around the garden like I should. 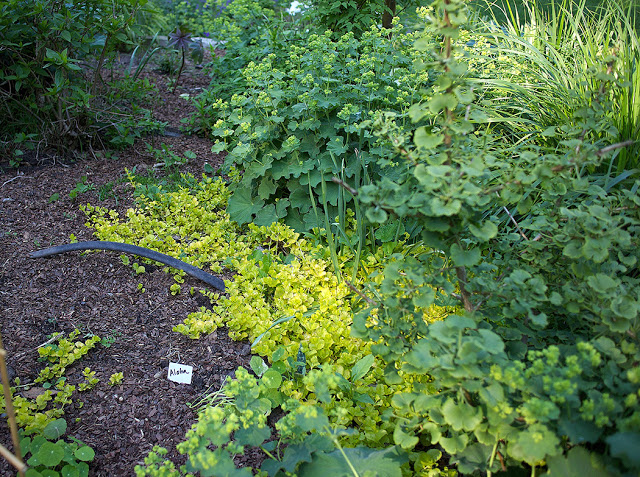 As soon as I mention the common name for this plant—creeping Jenny—you’re bound to have a visceral reaction, because this is one of those plants that walks a very fine line between friend and foe. I like the ‘Goldilocks’ cultivar for it’s brilliant foliage that works so well with blue and dark foliage plants and I think it maybe a tad less aggressive than other creeping Jenny varieties. It is lighter and brighter in more sun and turns lime green in shadier spots, which isn’t my favorite look. This does spread quickly. In fact I think my patch of it started with one plant that I pulled out of a container at the end of the season several years ago. It won’t hesitate to choke out smaller plants either, so I literally rip it out by the handful to create areas for other plants or just to thin it out when its look a bit too jungle-ish. 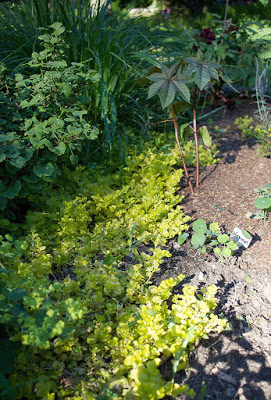 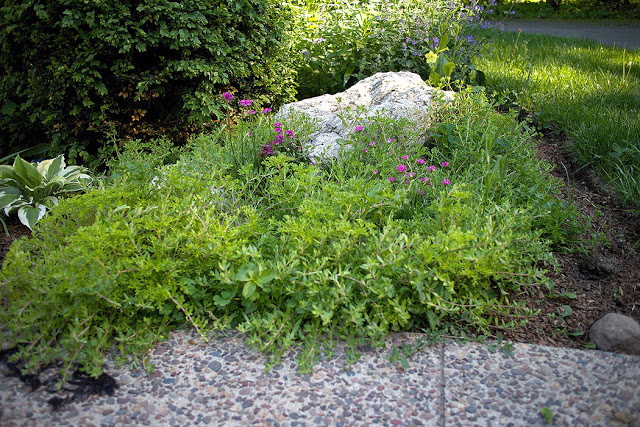 There are a lot of great groundcover sedums and I’m sorry to say I don’t know the name of the one I have a lot of in my garden. It gets about 8 to 10 inches long and a bit floppy, which isn’t my favorite habit, but what it lacks in tidiness, it makes up for in hardiness. This stuff will grow anywhere. Of all the groundcovers I’m featuring here, I think this is the most aggressive, but again, I’ve found it to be relatively easy to control. You can see here in the corner of the garden it needs a little taming, but it certainly fills a space quickly and easily. I think I’d like to try a groundcover sedum that stays a little lower and tighter in form. 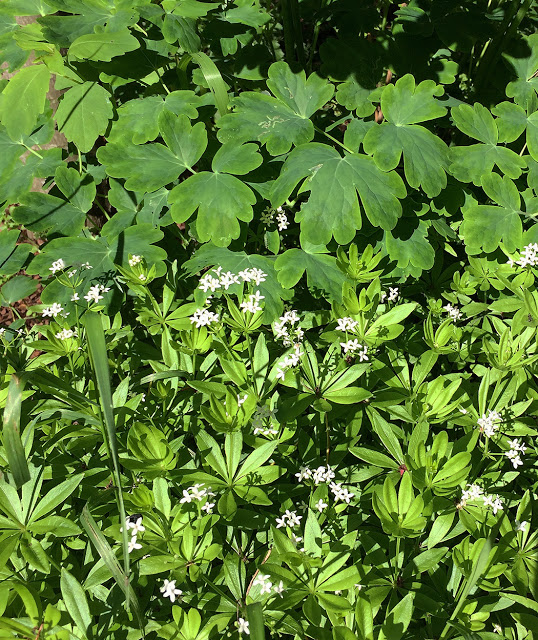 I have yet to meet a place where sweet woodruff won’t grow and really, that’s it’s charm. From deep shade to full sun, this groundcover whose leaves resemble mini lupine foliage, seems to just take off. It gets a tiny white flower that I find charming and requires absolutely no maintenance. I don’t even cut it back in fall. It just dies back and disappears and comes back the next year. I’ll be honest, it can be a little bit of a bully, but I’ve yet to be outwitted by it with just hand-pulling (not even digging) it out of the places I don’t want it to grow. It does seem to “eat” other plants so I try to keep it away from smaller plants. For me it serves the important purpose of growing in a lot of places where I just can’t be bothered to try to grow something else. In that respect, it’s a real garden workhorse. 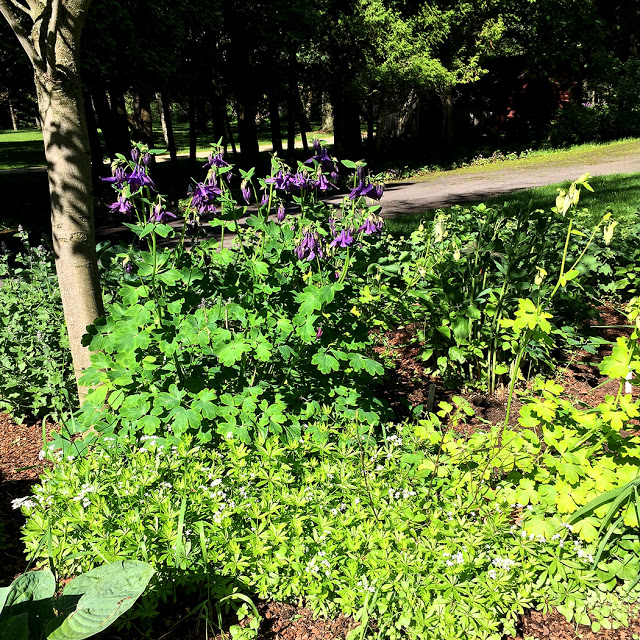 What are your feelings on groundcovers? I know a lot of people detest them and think they are messy, but I feel they serve a really important purpose in the garden. And if it decreases the amount of weeding and mulching I have to do, well so much the better.