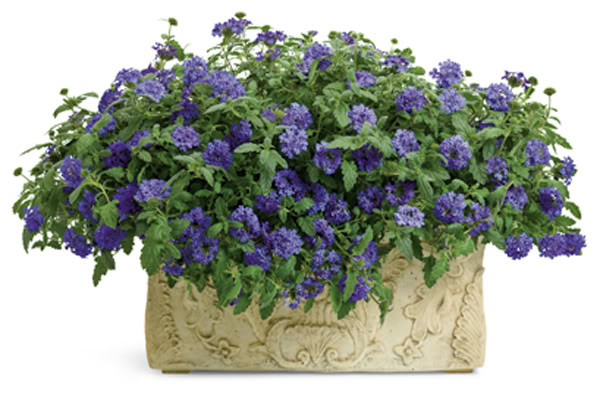 I tried several new-to-me plants this summer and found several real winners in the bunch. These are the plants I’ll find a way to incorporate into the garden next year.

5. Royale Chambray Superbena – I don’t have a photo of this from my own garden because I used it in the window box and it got a little crowded out by some of the more aggressive growers this year. I think the best way to use it may be all by itself or just with a foliage accent. What I loved about this was the bi-color flowers, sort of a deeper purplish-blue and a true chambray blue on the inside. It might have been the prettiest blues I’ve seen in a flower other than a hydrangea.

4. Baby Tut Umbrella Grass – I’m giving this plant high marks on potential. I don’t think I used it very well in my container (mixed with Snow Princess). It sort of took over and just looked cramped in there. But it provided amazing texture and sort of took on a roundish shape that I wasn’t expecting. I think it would be amazing in the right (large) container or in the landscape. Because it has such a strong form, it would be great used in multiple containers in a row. I’ll try this one again next year, but I’ll do something different with it.

3. Gold Dust Mercardonia – This is not a plant I expected to like. I’m just not big on yellow flowers. But Gold Dust has the cutest petite flowers that are just so charming. I stuck it in a pot with Raspberry Blast petunia in an effort to create the gaudiest container I could. I wanted something super bright for the steps by the front door to help break up the great white expanse of the house and I ended up loving this combination. I think this little charmer would be an excellent ground cover and would be awesome in the garden interspersed with perennials.

2. Kent Beauty Oregano – This isn’t a new plant, nor the first time I’ve grown it, but I fell in love with it all over again this year. It has the most wonderful pendulous habit and the prettiest delicate pink flowers. This is another plant that I don’t think I’ve found exactly the best use for yet, but I’m definitely going to keep trying. (Photo by Pantry House Herbs as my photos of this all stunk).

And my No. 1, most favorite new plant of the year is (drumroll, please) ….

This plant never ceased to amaze me this year. I had a little bit of a hard time finding it, but when I did, I paid $14 for a quart-sized pot. Thank goodness I had the forethought to plant it in a two-gallon container before sinking the whole thing into my big pot, because I have no doubt it would have taken over the world. I also thought it would be a total water hog, and it wasn’t. In fact it did quite well even this fall when we moved out of the house and the containers went largely neglected.

Here it is when I planted it:

And here it is last week, after not being watered for at least two weeks, probably more like three:

If I cut off the yellow bits, it still looks damn good.

I even used it in a flower arrangement and loved it. It is easily six feet tall, if not more, and rarely did a stem fall over. It was the perfect “wow” plant for near the front door too. Literally everyone who came to our house this summer asked me about it. Including one of the carpenters working on the house.

I did inquire with Proven Winners as to whether I could overwinter it, and was told it would be tough, even with grow lights, so I’m not going to bother trying. If it has one negative, it’s that it’s cost prohibitive to plant in as many places as I’d like to.

No doubt about it, King Tut will have a place in my garden for many, many years.

So those were my favorites. Tomorrow I’ll talk a little bit about a few honorable mentions and a few disappointments.

So what were your favorite plants this year?