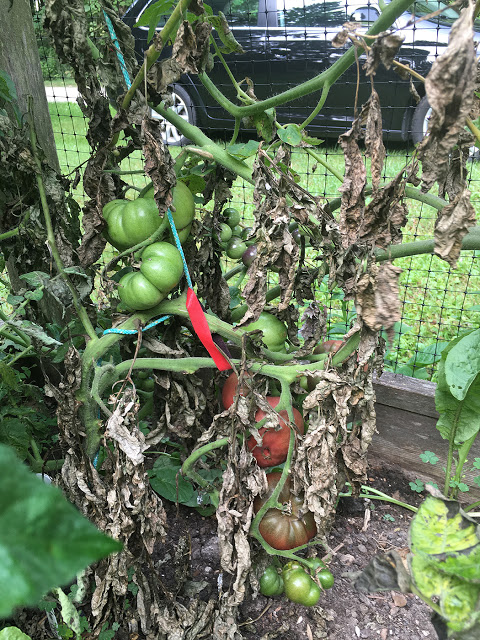 The poor vegetable garden has gone mostly unnoticed on the blog this summer. That’s a shame because at this time of year it really does provide an incredible abundance for us.

Part of my lack of excitement about is that I’ve been stewing over a plan to redo the entire vegetable garden area for a couple years now and that’s really where my head is. By this time of year the veggie garden is never looking its best, but it’s always doing its best.

As usual, my focus this year was on tomatoes. I can’t help planting more than I should because I’m no sure it’s possible for me to have too many tomatoes. I grew them from seed this year, some more successfully than others.

As you can see, that area is suffering from a bit of neglect right now. The mosquitoes have gotten horrible, so I keep hoping I’ll get home some day early enough to get in there and prune out all the bits that have succumbed to late blight (which always happens). Some plants have flopped, but they don’t care. It’s just not all that pretty.

As far as tomatoes go, the best producer so far this year is ‘Oxheart Pink,’ which we grew from seeds from the local seed library. They are relatively tasty but prolific so that makes them the current favorite in our house.

‘Barred Boar’ is a beautiful tomato that is somewhat lacking taste for me. I was hoping it would be a bit sweeter although sometimes later fruits taste better. There’s not been much production yet from any others as I’m still waiting for lots of green fruit to ripen. I will say that I’m growing ‘Blueberries’ cherry tomato for the first time this year and one of the things I read about it was that you have to wait for the entire tomato to turn purple before you eat it or it tastes terrible. That advice is completely correct. 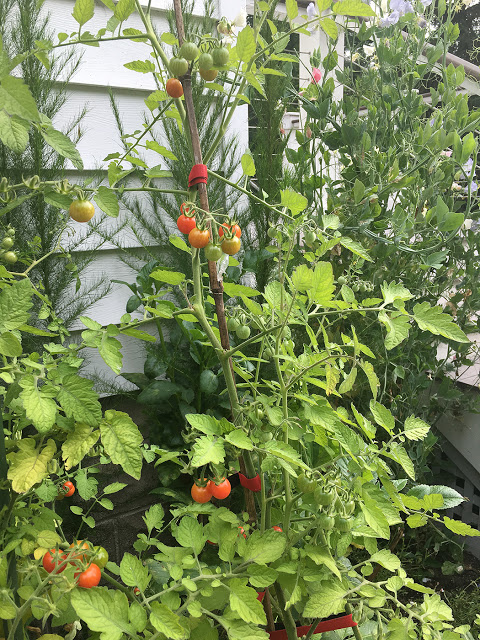 The star of the tomato show is not in the veggie garden proper, but rather in the container near the back door where I’m growing two ‘Mexican Midget’ tomatoes. These are lovely, small tomatoes that are the perfect size for munching on while passing by, which is exactly how I’ve consumed every one. Delicious little fruits that are a really nice size. I don’t like big cherry tomatoes because they present a dilemma: bite them in half to take a proper amount but risk the dreaded cherry-tomato spray or stick the whole thing in your mouth and look like a complete pig trying to eat it. 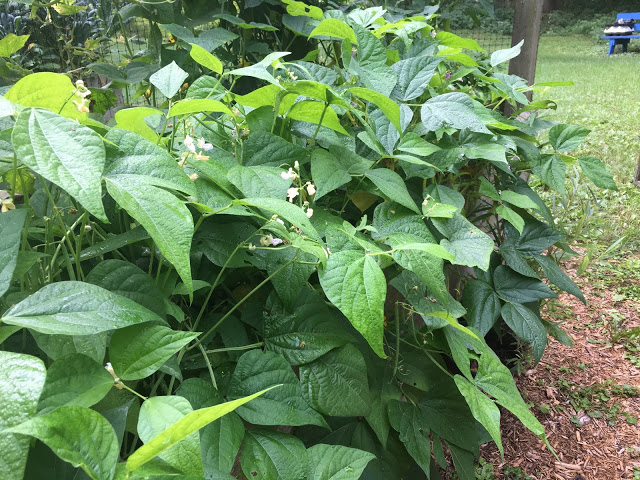 The cucumbers and green (and yellow) beans are really coming into their own. I have to check what kind of cucumbers I decided to grow this year other than ‘Marketmore.’ I’m not happy with the size of them at all. I prefer cucumbers meant for pickling that you can eat when they are small and before they’ve developed a lot of seeds.

I’m just started to harvest beans, which are probably my favorite vegetable. These rarely make it back to the house until there are enough that I can’t eat them all on the short walk. 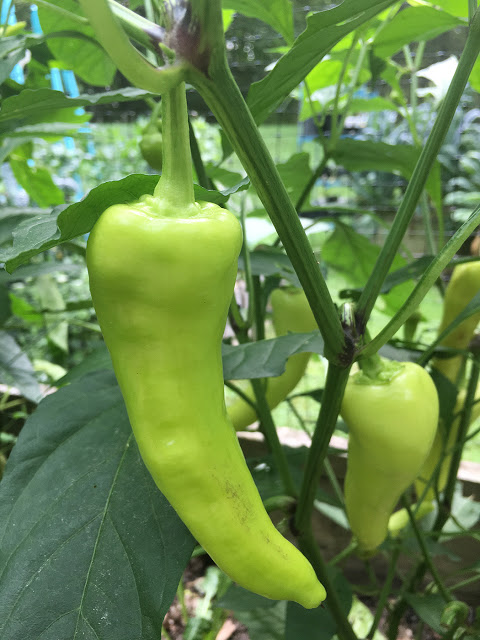 I’m growing banana peppers for the first time this year and they’ve been going gangbusters. I’ve already pickled a few jars (I love them sliced on sandwiches). Basil is enjoying this warm, sunny summer as well.

Outside of the fenced-in veggie garden I’m growing entirely too much kale (what was I thinking?) and the celeriac, which I first grew last year, is doing great. I’m a fan of that one and it’s difficult to find in stores or even at the farmer’s market.

How’s your edible haul this year?