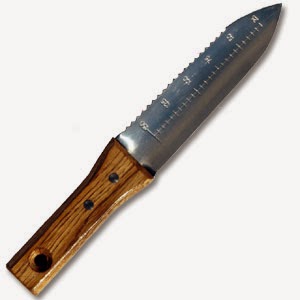 Several years ago, my gardening life was changed. I discovered the hori hori aka soil knife. Instead of carrying around various trowels, pruners and weed extractors, I could garden with one tool.

Hori horis pretty much do it all. They cut open bags of mulch or pieces of twine. They dig out weeds, they create trenches to plant seeds, they cut off small branches and free potbound plants from their containers (by destroying the container). And most off all, I felt like a gardening badass wielding a big ol’ knife in the yard.

I had two main problems with my original hori hori: Its wood handle was not particularly comfortable to use and meant that if I stuck it in the ground for a second I might spend the next 20 minutes looking for it and there was no ergonomic design to it at all.

Then I found out about the Professional Gardener’s Digging Tool, which is sort of a hori hori on steroids. I thought this would be improvement I had been looking for. First, it has a red handle so I wouldn’t lose it as much. Second, the handle is offset from the blade so you get a lot more digging power. And third, there is a nice hand guard that you can use to push against.

But the the blade on it is very thick. This is good for serious digging because there’s no way this thing is going to break, but it’s not good for any of the other things I like to do with my hori hori. The blade wasn’t really sharp at all, so cutting plastic bags was reduced to poking a hole in them and ripping. It was also no good for light pruning. One of my favorite things to do with my hori hori is to stick it in the ground at the root level of a stubborn weed and turn it around it, cutting the roots. Because the blade on this was so average, that didn’t work. And the thing is a beast, so it’s not like you can stick it in your pocket or anything.

I don’t know anyone who had tried a soil knife who hasn’t fallen in love with it, at least in concept. So there must be several versions out there, right? They were surprisingly hard to find.

Here’s what my perfect soil knife would have:

I posted on a gardening group on Facebook and these two were suggested to me (in addition to the very good suggestion of painting the wood handle of my existing hori hori a bright color, which is a thought that has occurred to me in the past but I’ve never done).
Fiskars Big Grip Garden Knife

This tool has a cast aluminum blade, but it is serrated on one side like I wanted. It also has a hand guard at the top of the blade to push on. I don’t see that there’s much in the way of a comfortable hand hold, but the handle is at least plastic and the tip of it is orange.
I’m not sure about that split tip. I’m not really sure what that would do. Rather than a fully curved blade like both of my soil knives have, it has a curved channel in the middle and straight edges. That’s neither a positive or a negative in my book, just different.
The best thing going for this one is the price. It’s just $8.99, meaning that if you lost it, it’s not a huge heartbreak to buy another. Or you could buy a couple for different places (i.e., I might keep one on my car for when I run out to the community garden).
A.M. Leonard Deluxe Soil Knife 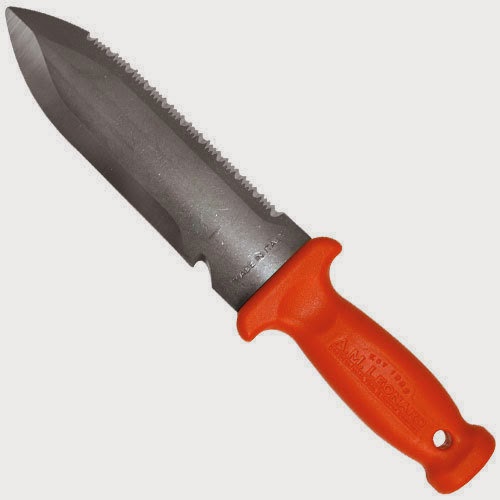 This tool has a stainless steel blade, with serrated and straight sides like I wanted. Those serrations look serious and there is a probably a good chance I could cut my finger off with this one. Imagine that tetanus shot. There are inch marks on the inside of the blade as well, but I’ll be honest, I almost never measure anything in the garden.
It also has a bright orange handle with a bit of a flare as it meets the blade so that’s kind of a guard. It has a thumb rest too, although until I actually got it in my hand, I’m not sure if I’d use that or not. Although the handle has some shape to it, it looks to be made of a hard plastic, whereas the Fiskar’s one was “soft touch” so I presume there would be some give to it that might help with hand fatigue.
The little notch is for cutting twine, which I can see being useful, although really it’s not that big of a deal to cut twine with the blade either.
This one is $21.99 plus shipping (since I don’t think you can pick it up in most stores or on Amazon Prime).
Want to guess which one I bought?
Yep, it’s the A.M. Leonard one. The reviews for it are stellar, but what really sold me was the stainless steel blade. I haven’t received it yet, but I’m looking forward to getting my hands on it.
I’ll do a review of it compared to my other soil knives in a few months after I’ve had a chance to put it through its paces.
What’s your go-to gardening tool?
If you’re looking for reviews on the traditional hori hori, Fiskar’s Big Grip Knife and the Professional Gardener’s Digging Tool, check out North Coast Gardening where Genevieve, who is a professional landscaper, has reviewed all three.
hori hori soil knife tools
by Erin @ The Impatient Gardener
11 Comments
previous post: FEATURE FRIDAY: GREAT GATES
next post: FEATURE FRIDAY: SPRING HAS SPRUNG