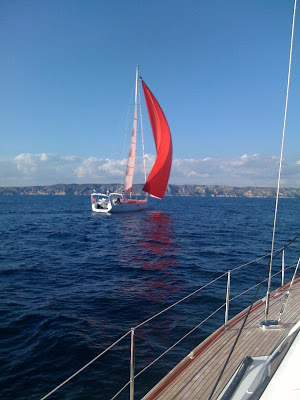 T   hat is how pathetic my French language skills are. I’ve been wanting to post for a couple days and could not figure out how to say anything catchy in French. I’ve finally given up trying.

Anyway, I was in Marseille on business for two and a half days last week. Unfortunately about 20 hours of those two and a half days were spent suffering from what I’m assuming was food poisoning. I’ve never been afflicted with any sort of major food-borne illness before that I’m aware of, and I have to say that was a most horrific experience. At one point I was fairly convinced I was going to die in a Marseille hotel room, which sounds almost a little romantic until you find out that the cause is bad chicken (or maybe lettuce, I really don’t know).

Spring was just attempting to make an appearance there, which was obvious from the roadside trees in bloom (no one could tell me what they were though). The sun had warmth to it, which felt great. Because I was at a very well-scheduled event I had no time whatsoever to explore the city or get more than a few blocks away from the hotel.

I was there testing new sailboat introductions, so I spent quite a bit of time on the water and quickly snapped this picture on my phone.

Anyway, the good news is that right after I got home I went down to the Proven Winners Outdoor Living Extravaganza in Chicago where I was able to really get into gardening mode through the great line-up of speakers. So much good stuff to report from that that I’m not even going to attempt to fit it all in one post. So stay tuned for a handful of posts on that this week.

by Erin @ The Impatient Gardener
2 Comments
previous post: Free your garden (and yourself) from the grip of Roundup
next post: Gardening with your senses: Tips from a Martha Stewart Living Magazine garden editor