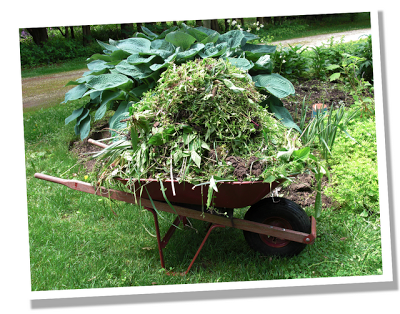 F  or almost five years now I’ve been an almost entirely organic gardener. The caveat is there because I keep a bottle of Roundup in the garage for particularly offensive weeds that seem immune to the more friendly ways of deals with their demise.

No more. The Roundup is going away (through my county’s hazardous waste disposal program). You won’t catch me telling you what you should or shouldn’t do very often (I’m very much a to-each-his (or her)-own kind of person), but I’m going to do it right now: Get the Roundup out of your life.

Roundup is the best-selling herbicide on the market so if you use herbicides, odds are you’re using Roundup. It’s made by a company called Monsanto (which also brought us a little herbicide you might be familiar with called Agent Orange). I could go on for a long time about all of the things Monsanto does that I do not disagree with, but I won’t. If you want to know more though, you can check out some of these posts from Garden Rant here, here,  and here.

But here’s the problem: Roundup is bad stuff and we’re finding out just how bad it is. Genevieve over at North Coast Gardening addresses the issue here.

Check out this wheelbarrow full of weeds pulled from my garden last spring. It was a lot of work, but I got them out of the garden never to return by pulling them out, root and all, no chemicals involved.

Now I know you might be thinking, “How bad can it really be?” Well, first of all, there are all sorts of instructions about what sort of protective clothing, eyewear, etc. you should be wearing before you use it. How many times you have actually followed those instructions? If you’re like me you might have taken the time to throw on sunglasses first. Not good.

As you find from reading Gen’s blog post, the active ingredients in Roundup have been found to be endocrine disruptors which, plainly put (in my most unscientific sounding language), can screw up the reproductive system. That’s bad for animals and really bad for humans (of all ages).

Even if you’re a naysayer who thinks that this uprising against Roundup is one more example of organic goodness gone wrong, I ask you, why take the chance? Why even tempt fate if there’s even the slightest chance that this may be true?

Because, you know, there are a lot of other ways to get rid of weeds. How, you ask? Well here’s where we can start:

1. Pull them. Pulling out the entire weed, root and all, is the simplest and most effective way to get rid of a weed. Period.
2. Prevent them by mulching (in your garden) or by using a pre-emergent natural herbicide such as corn gluten meal (on your lawn).
3. Burn ’em. Yep … you can burn weeds with a weed torch like this. I think this sounds like tons of fun, especially for guys (who seem to be prone to having pyromanic tendencies).
4. Boiling water. This obviously works best on an area where you want to kill all vegetation rather than spot treating just a few weeds, but it does, in fact work after a few applications.
5. Horticultural vinegar. The North Coast Gardening article linked above has a coupon code for 30% off a new product called Weed Pharm, which is super strength vinegar in a spray bottle just waiting to take the place of that nasty Round-Up. Like boiling water it will kill anything it comes in contact with it, so you want to be careful to shield nearby plants that you don’t want to kill. The safest way to apply it is probably to brush it on, but that’s far too tedious for me to be bothered with.

If you don’t want to open up the link to the North Coast Gardening article, here’s the link to buy Weed Pharm. If you use the code WEED30, you will receive 30% off through March 11. I’ve not tried it yet, but I plan to order some and give it a go.

If you’re still using products like Roundup, just try going without them this spring. I bet you’ll find that you don’t really miss them much and just think of the peace of mind you’ll gain knowing you’re not putting yourself in potential danger. That is, of course, unless that weed torch gets away from you.

roundup weeds
by Erin @ The Impatient Gardener
2 Comments
previous post: Get in the mood for gardening
next post: I’m back (in French)