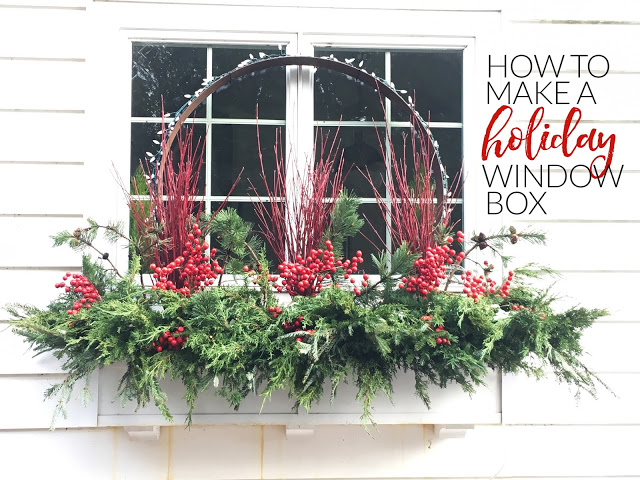 I got a lot of questions recently about how I constructed my holiday containers and window box so I thought I’d share a quick tutorial. I can’t say that I invented this method, but I’ve gotten pretty close to perfecting it after several years of tinkering with it. The inspiration for it came from the professionals, mostly Deborah Silver.
Just a reminder, my challenge this year was to only use foraged materials and things that I already had, so I did not spend a single penny on this window box.

I try to leave about three-quarters of the potting mix in the window box after I remove all the plants and to do this before that soil freezes, because it’s much easier when it’s soft. The foam—3-inch-thick large sheets that I purchased at Michael’s several years ago—is saved an reused every year because it’s an investment. I hot-glued smaller pieces of foam as supports underneath the main foam layer, which is several pieces doweled and glued end-to-end to fix the window box. You can also use green waterproof tape (affiliate link) to tape pieces together, which is what I do for other containers.
Once I have the foam fitted in, which sometimes requires moving some soil around, I use two bamboo stakes at an angle pushed all the way through to help hold it in. These stakes will freeze in the soil.
The next step is the ring, and this is the bit I’ve had the most questions about. Detroit Garden Works sells pre-lit metal rings for hanging or staking, but if you’re looking for a less expensive option, you can look in a few places. My metal ring came from a local metal worker, who made me several rings of different sizes a few years ago at the same time we had him make a fire pit ring (two of them ended up as art). I don’t recall the cost, but the rings were incredibly inexpensive, so if you can find a person like that, it’s a good option.
I’ve also retrieved rings from rotted out wagon wheels (of which there several inexplicably kicking around my neighborhood) and the metal bands from old whiskey barrel planters. As an alternative, I think you could double up a pair of hula hoops or even PVC tubing and paint it black.
There is a small hole for a stabilizing stake in the middle of my ring, so I used that to hang the ring from my basement ceiling and I could easily wrap the lights around the hoop. The key to keeping the ring look is to wrap the lights (I used a string of 200) around the outside of the ring, instead of wrapping them in and out through the middle of  it. Make sure that the male plug is at the what will be the bottom of the hoop. When the lights are wrapped, I used zip ties (see my trick for managing the little buggers here) in a dark color to secure the lights in various spots around the ring.
Putting the ring up is the trickiest part because it requires a bit of lean. I use a stake through the hole in it to keep it from rolling around but you could fashion a method of pinning it down with a bend wire hanger or something else if you don’t have a hole.
I like the window box to look like it’s glowing from within, so take another string of lights and just lay them behind the ring. I wish I had added another set of lights or used a light garland (the kind that are nothing but lights) because I would have preferred more glow. You should also hook up your extension cords at this point because it’s much easier to get to before all the greens are in.
Next I make the dogwood bundles. For this window box I wanted the red dogwood to have a lot of punch and that’s difficult to get with individual branches, so I pick out the nicest, straightest branches and bundle them together. Then I take a bamboo stake (the same ones I used to prop up my dahlias in summer) and stick it in the middle and tie the whole thing together with zip ties. I actually needed two ties for each bundle because they were too fat for just one.
I try to make all the bundles the same size and height and I leave a little bit of room at the bottom to make the sticks shorter if needed.
When I put the twig bundles in, the stake holds them in place and I made sure to drive it all the way through the foam into the soil.
After the twigs, the next step is the greens. I try to cut all the pieces roughly to the same size for some uniformity, but that’s not required if you like it to look a little bit more natural. When I put them in I start with the branches sticking straight out, coming from the side of the foam, and starting from the bottom, I work my way up to more angled greens. Because this is a high window box, I don’t worry if there is foam showing on top because you’ll never see that either from the ground or inside.
With the greens filled in and trimmed a bit here and there, I added faux red berries, purchased several years ago at a Black Friday sale and saved every year. Make sure you buy faux branches specifically labeled for outdoor use or they will lose their paint or completely dissolve quickly. I also had some short pine branches with adorable little pine cones still attached that I used to fill in near the dogwood. I don’t like to fill in too much too high because I still want to see out the window from inside.

And, of course, a good snowfall doesn’t hurt either. 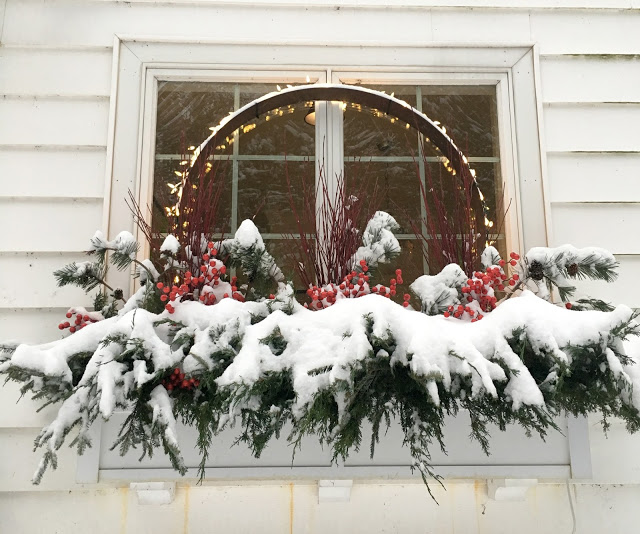 And even from inside, it’s a lovely view. 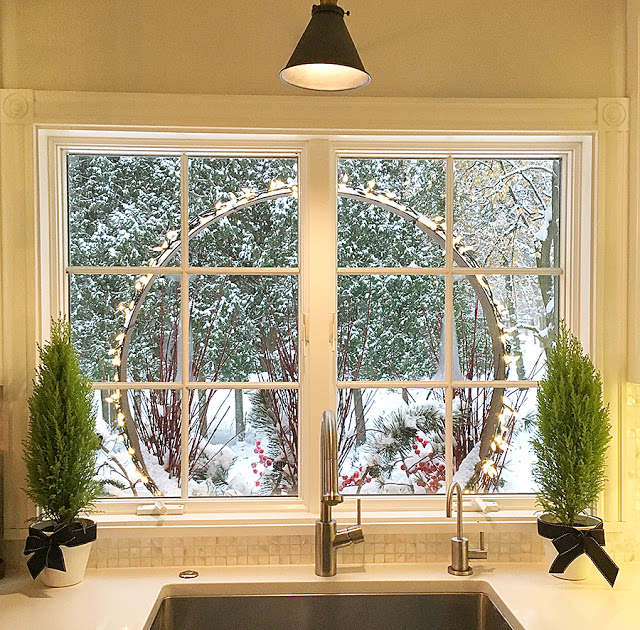