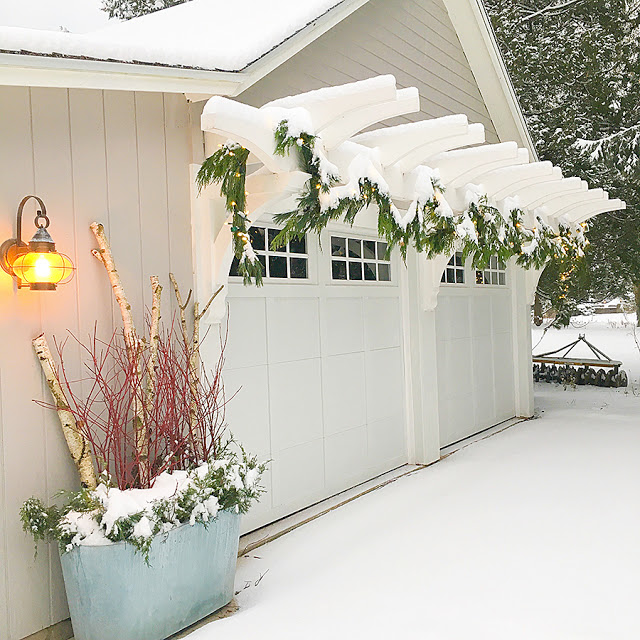 There is no Christmas tree in my house. That, of course, was not the plan. The plan was to be ahead of the game this year, but once again it’s the last minute and nothing is done. I’m tempted to just skip the tree at this point, but we did that last year and I feel like skipping a tree one year is fine, but skipping it two years in a row is positively scroogelike.

But the outdoor decorations are finished so that’s something. And I’m happy to report that I met the challenge I set forth for myself to not spend a penny on any holiday containers and use only what I already had or what I foraged. I did buy some garland at Costco for the pergolas, but that puts the entire budget for everything I did outside at $30. I’m calling that a win.

The trough planter by the garage is big enough that moving it without removing the soil would be impossible. And because there are two clematis in there (they are group 3 types so they’ll be cut back in spring, but for now I’ve taken the foliage and tucked it behind the holiday decorations) the soil can’t be removed. Really simple decorations here: dogwood and evergreens just stuck in the soil with birch logs from the big tree that fell in our woods just leaning against the garage and a simple garland wrapped in lights. 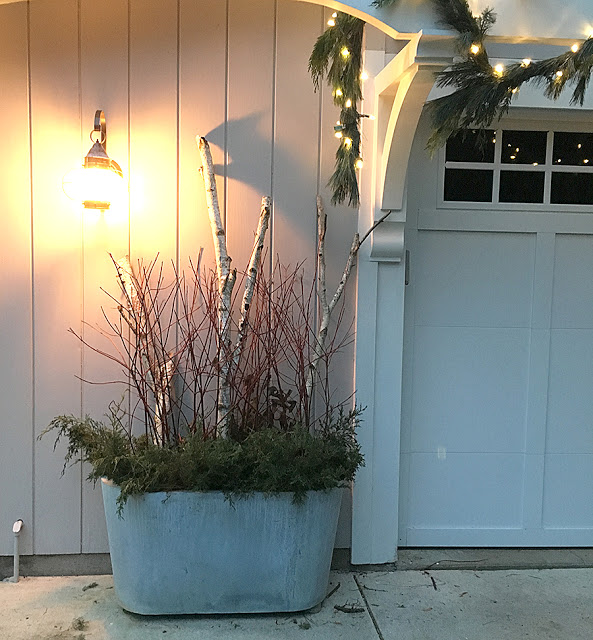 The urn in the middle of the garden got a similar simple treatment. The snow came so quickly after I finished it that I didn’t get a chance to take a picture of it before it was covered in the white stuff. 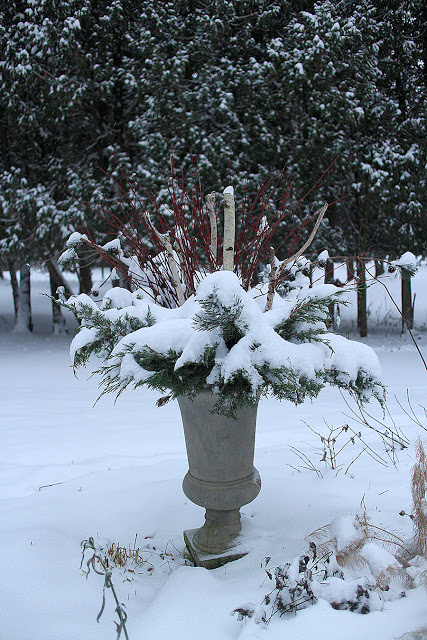 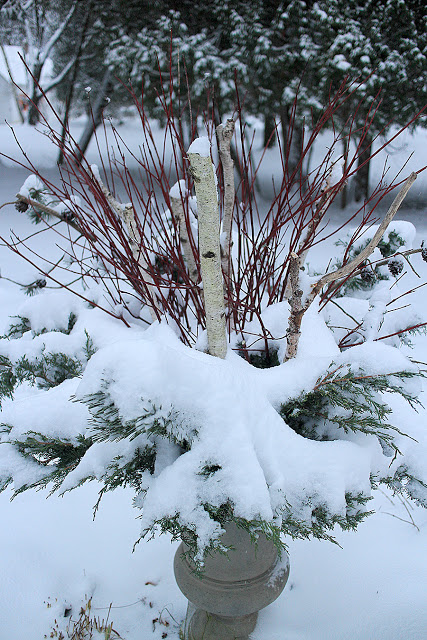 The large planter by the front door got an unusual treatment that I thought played off the ring in the window box. Again, no sooner did I finish it, than a big snowfall did some of its own decorating. The small lit rings are metal rings from the inside of rotted wagon wheels that I wrapped in tiny LED wire light strings. (You can see what I did with those rings in summer here.) And yes, there is a sad and formerly lovely rosemary plant in a pot next to it that was forgotten when I brought plants in, so now it serves as sculpture of sorts. 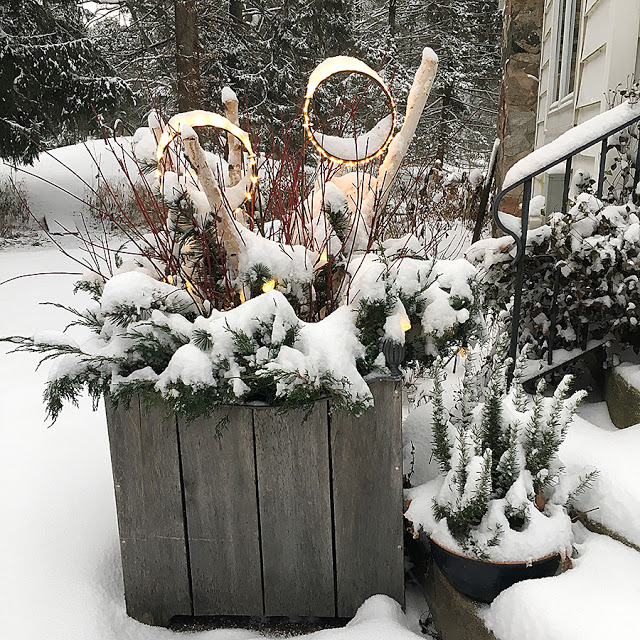 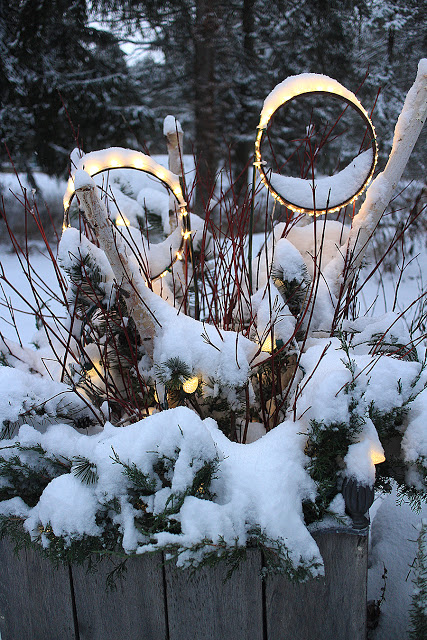 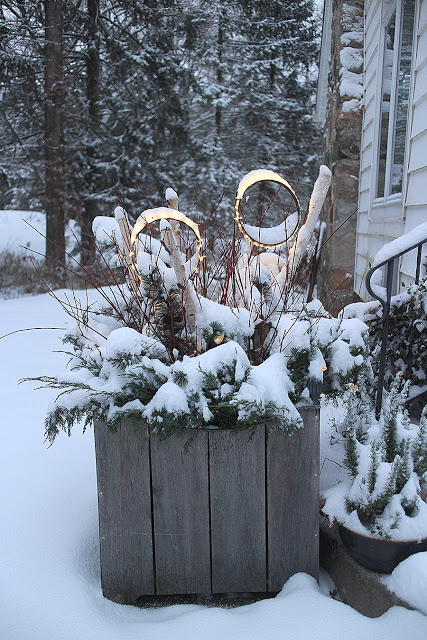 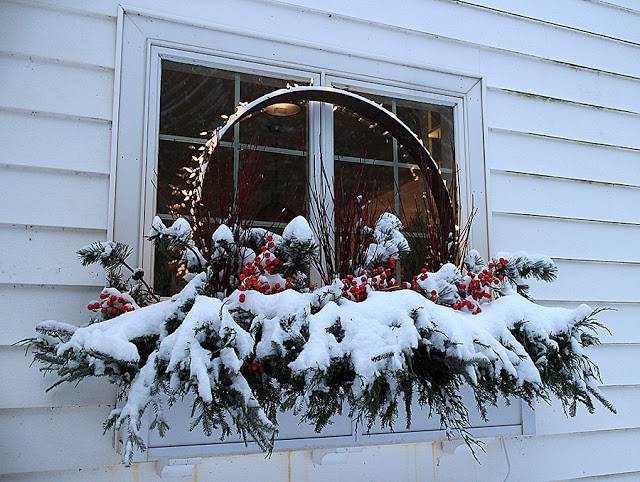 I had to throw in a picture of our special ‘Hudsonii’ spruce, planted in honor of our first Newfoundland Hudson. It’s the only thing that gets colored lights and it looked so perfect with the snowfall against the otherwise black-and-white winter landscape. 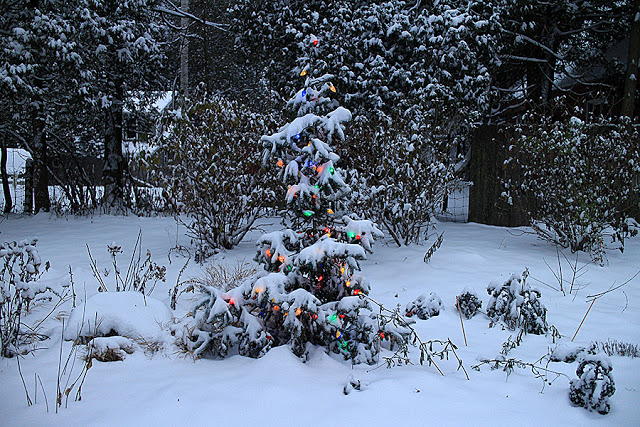 I also very quickly did the container at the office. I hate to admit it, but I really threw this one together with what I had left around and in about 15 minutes, so it isn’t quite as neat as I would like. The trellis lives in another container there during the summer but I thought it added a nice touch. The big ornaments sort of look like they are waiting to hatch in their little nest. 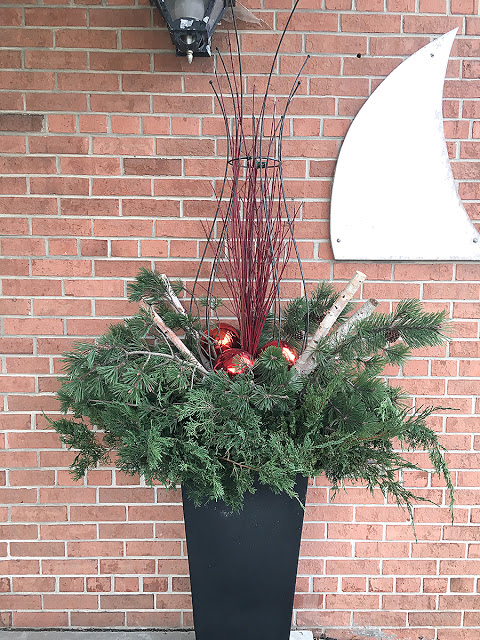 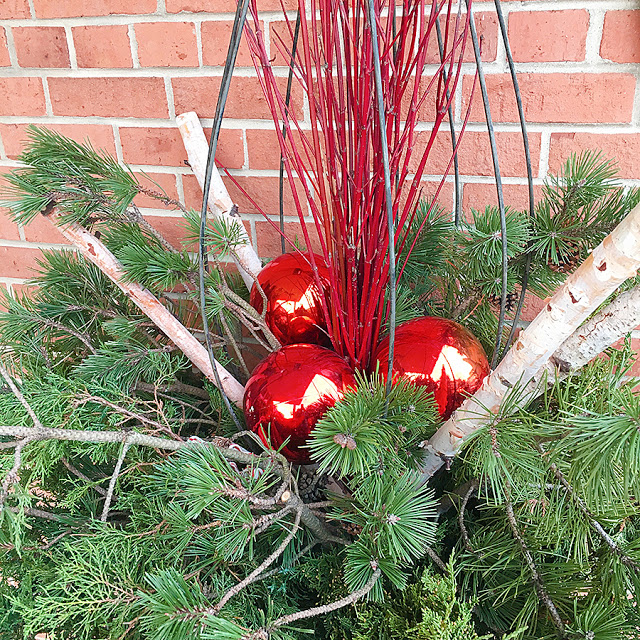 So there you have it: five winter containers all done without spending a penny. There is actually one other small pot I did on our garden bench but I didn’t manage to snap a picture before it was mostly covered in snow. I’ll shoot one when it emerges.

Where are you at with your holiday decorating?