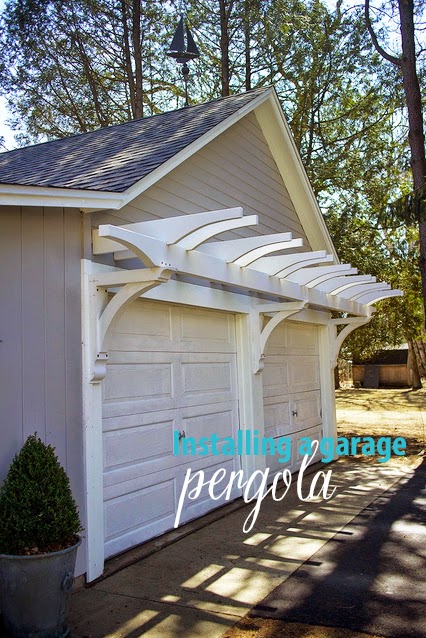 I’ve never been known to whip through projects quickly, but adding a pergola to our garage certainly took longer than most. Although I first mentioned adding a pergola (among other changes) on the blog way back in October 2013, we didn’t start actually building it until last fall.
We used this article from This Old House for reference, but for the most part we just sort of winged it. I drew up the design for it on graph paper using our existing pergola on the deck as a guide. I wanted the two pergolas to reference each other to help tie the garage into the house. 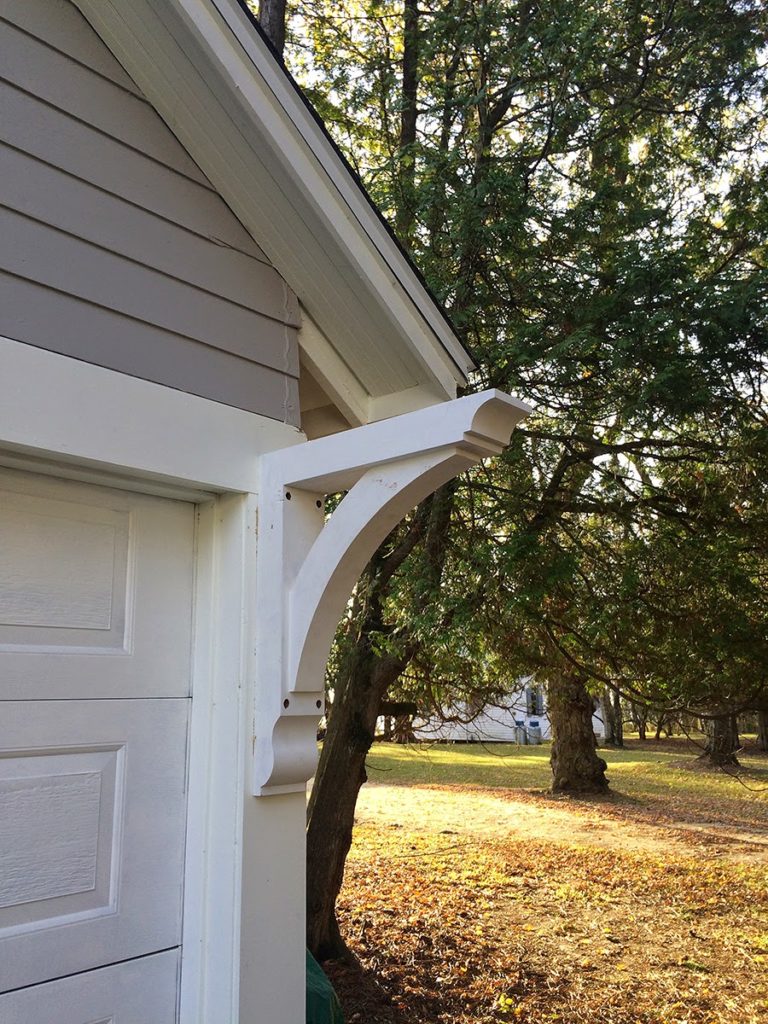 I bought the three brackets from Pro Wood Market and these were by far the biggest expense in this project. I choose a style similar to the brackets by the front door, again to try to keep some symmetry between the house and garage. You could certainly build your own brackets, but given that I wanted a little more detail it seemed like it would be much easier to just buy them.
After consulting with our neighbor, who is a contractor, we used large lag bolts and a little construction adhesive to attach the brackets. It was important that these be very strong because they bear the entire weight of the pergola. 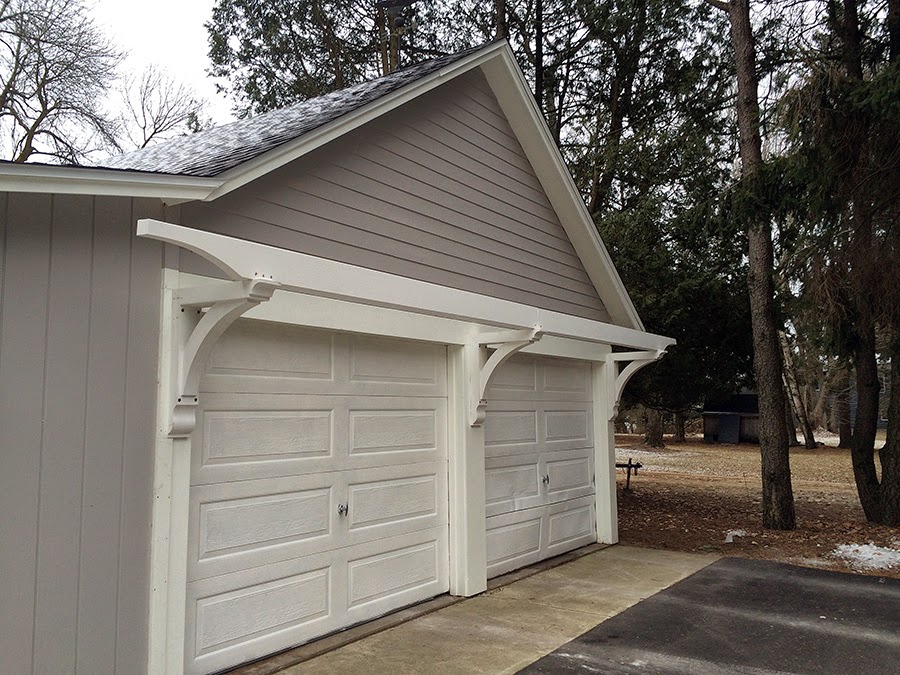 The next step was the main beam. Although the pergola on the deck has two long boards serving as what I’m calling the beam, because the beam on the garage needed to span 24 feet, we opted to create one thick beam. We thought it would be easier to laminate 2×8 boards together to create one long beam of double thickness. Before doing that, we cut the end profile on the end pieces, then we used two 12-foot long boards for the front and three 8-foot long boards for the back. We attached them all using construction adhesive and a lot of screws.
And that’s where we ran into our major snag of the project. We didn’t do a good job of lining up the “crowns” of the boards (all lumber has an inclination to curve one way or another. Generally, you want boards to curve in when you’re laminating them), so it just wasn’t coming together nicely. Before the construction adhesive dried, we pulled off the offending board, turned it around and reattached it. And that’s when we realized that we had one of the curved end details pointing down as it should and the other end detail pointing up. So we had to fix it again.
I also filled all of the screw holes and the seam where the boards met on the bottom with exterior wood filler. I used caulk on the top seam. Unfortunately, I obviously didn’t use enough caulk on the top, because water permeated the seam, causing the wood filler on the bottom to fail and the stain to peel away.
I should also add here that all pieces were primed with alkyd primer (I use Benjamin Moore Fresh Start) and stained with solid Arborcoat stain, tinted to match Benjamin Moore Simply White. I know it sounds completely weird to prime before staining, but that’s what you have to do (according to the can of stain and the contractor who did our house renovation). I’m not sure what makes solid stain all that different from paint, but I go with whatever works.
When attaching the beam, we measured a certain distance back from the end of the bracket, rather than out from the garage, which is not at all even.  We attached it with several long screws into the bracket.
We used the same end profile on the beam and the purlins (a term I had never heard before reading the This Old House article), and copied it directly from the house pergola. At first we tried cutting the profile with a jigsaw, but our jigsaw skills are not great. In the end, we borrowed a friend’s business workshop which had a bandsaw and we were able to whip out all the cuts in a short period of time.
We made the purlins out of 2×8 lumber and kept all of them long on the garage end so that we could fit them individually on our less-than-square garage. Then we notched out an area for the beam, so the purlins would nestle on top of it. Everything was measured from the profile end so we could fit them to the garage later.
As far as design, I wanted to incorporate the double sets of purlins and I wanted the center set to straddle the midpoint of the beam. We made the space between each purlin in a set a little larger than the pergola on the house because we were covering a much larger area.
Attaching the purlins was definitely a two-person job. First, we used scrap plywood fit between the studs on the inside of the garage where we would be attaching the purlins as a backing plate so there would be structure beyond just the siding holding them on. These backing plates were stapled in and we used a little construction adhesive as well.
We mapped out the location of each purlin on top of the beam, penciling in guides for each location.
On the outside, we used a level to measure the distance from the back side of the beam to the garage, thus giving us the measurement we needed to cut the purlin to from the back side of the notch. We then made sure the purlin was square to the garage and the beam and level, and traced the location of the end of the purlin on the garage. Then we drilled two holes from the outside of the garage where the butt of the purlin would go.
I stood on the ladder outside and re-lined up the purlin with our guide marks, double checking for level and square, used just a dab of construction adhesive on the top of the beam to hold down the end of the purlin, then Mr. Much More Patient screwed from inside the garage through the backing plate and into the purlin.
It was all pretty time consuming because we had to repeat the process for each of the 14 purlins, but what we ended up with was perfectly even ends.
I still need to plug the holes on the brackets, fix up the failed wood filler on the beam and touch up the stain, but the structure is finished.
And look how far we’ve come in a year and a half. 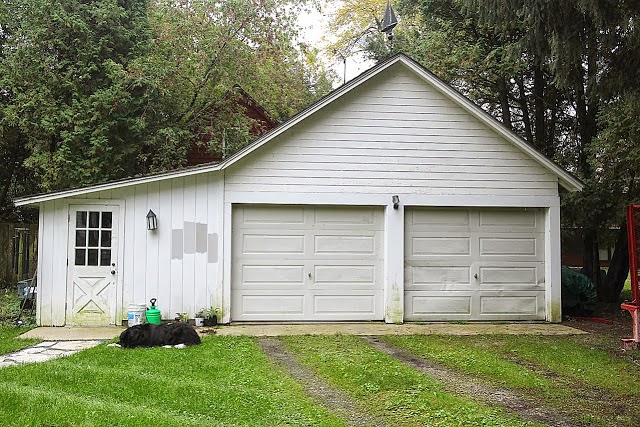 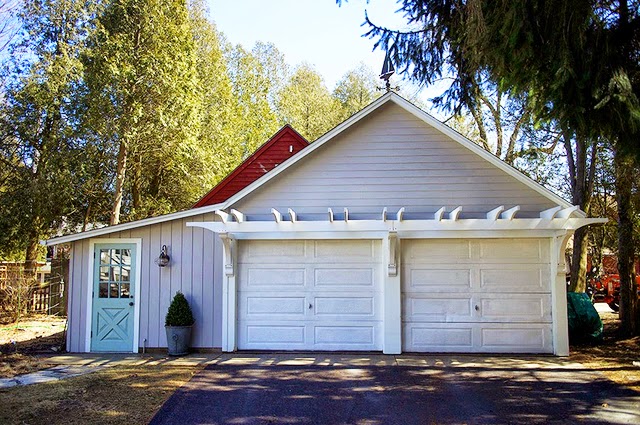 Before our garage looked like it was suitable only for being torn down (and we thought about it). But a new roof, paint job and the pergola have breathed new life into it. Paving the driveway didn’t hurt either. New garage doors would complete the look and hopefully that will happen soon but I have to price some out first.
I would love to grow something up the pergola but it’s far too shady there for anything to grow decently. One option for some additional may be to hang baskets from each bracket but I can easily see myself forgetting to water them.
One of our new neighbors to the south is an accomplished architect and paid us the huge compliment of telling us that the pergola “did wonders” for our garage. I’m calling that a win. 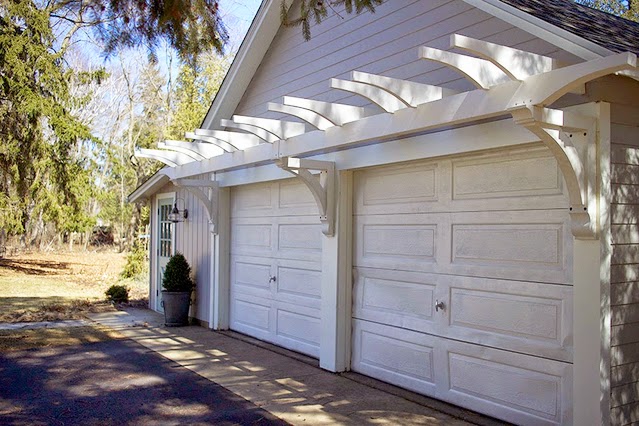 Here’s some of the other stuff we’ve done to spruce up the exterior over the past year or so:
Painted the service door
Had the garage painted
Paved the driveway
Added the containerized boxwood
Redesigned the back yard garden