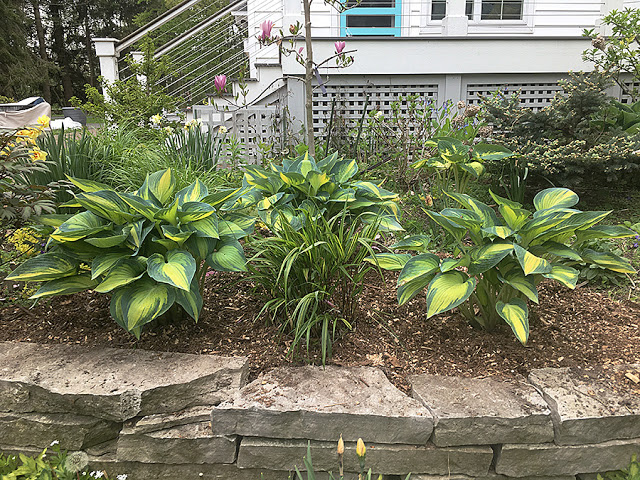 Hostas, at least the ones in my garden, are just about at their peak. They thrive in the cool nights, (semi) warm days and constantly damp soil thanks to spring rains. The armies of slugs haven’t hatched to attack them yet and so far the deer have been (mostly) thwarted by my preventative measures.

Their leaves are brilliantly colored and nary a stem is flopped. So perhaps it’s no surprise that this is the time that I typically end up tinkering with them. Earlier in the season, when they are in their stubby-shoots-coming-up stage, I tend to forget just what they look like fully unfurled. But now my lousy gardener’s memory is jogged.

I vowed this winter (at least mentally if not publicly) to be better about maintaining my garden this year, and that starts with doing some dividing and rearranging that I’ve put off for far too long. So this weekend I did a bit more of that, and I have to say I’m happy with the result.

Since I made this video on how to divide hostas, lot of people have been asking me if it’s too late to divide them now. The answer is an unequivocal no. In fact, you can technically divide them at anytime, but recognize that the more leafed out it is and the warmer the weather, the more you’re going to have to water to counteract the stress it’s been through.

Sunday afternoon I divided one of the Hakonechloa ‘Stripe it Rich’ grasses I grow in the east terraced garden. I’ve never seen that cultivar anywhere else but that plant grows so well in that half-day-of-sun situation. Originally there were three of them. One died, and the other two got quite big. My intention was to divide the remaining two (making for plants total), replant the third of the trio that had died and move the other division elsewhere in the garden. It’s a good thing I started with the middle one because that thing was a beast to dig up and divide. 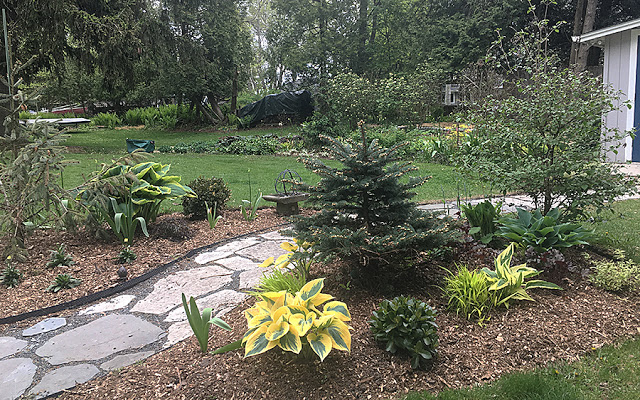 After that bit was done, I moved two of the hostas that surrounded the center grass. One was ‘Autumn Frost’, which I consider to be the single best looking spring hosta that has ever been grown on the face of the planet, and another is an unknown. The third was ‘June’, which is certainly in my top five favorite hostas. ‘June’ had gotten quite large, so I decided to divide it into three and replace the moved hostas, although space things out a bit more to accommodate growth better than when I originally planted there. 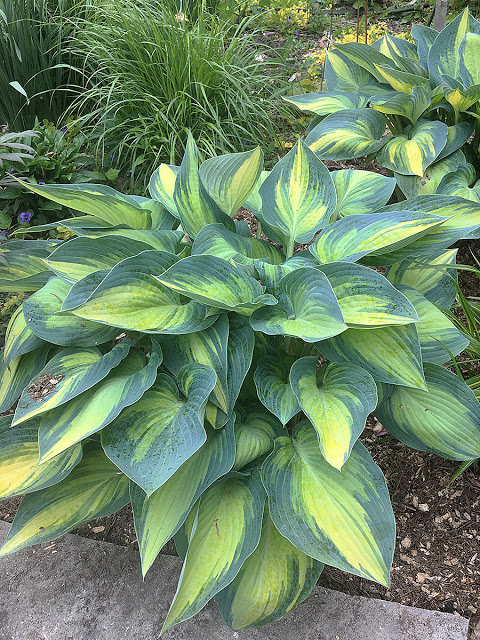 If I thought the grass was difficult to dig up, I clearly had no idea what ‘June’ had in store. In fact Mr. Much More Patient was called into rare garden service to grab a shovel and dig/pry opposite me. (In case you were wondering, he’s been well trained for these moments, starting with “What is safe to step on here.” He’s a good man.) The root ball was so big I had to have him help me roll it out of the hole. Things were much more manageable once ‘June’ was finished with surgery and I’m happier that it’s a bit more of a cohesive look there.

That job, which ended up taking well over an hour, was certainly not the only thing I did in the garden this weekend, but it probably brings the most satisfaction. And it’s one more way I justify not having to go the gym. Crossfit has nothing on hosta dividing.