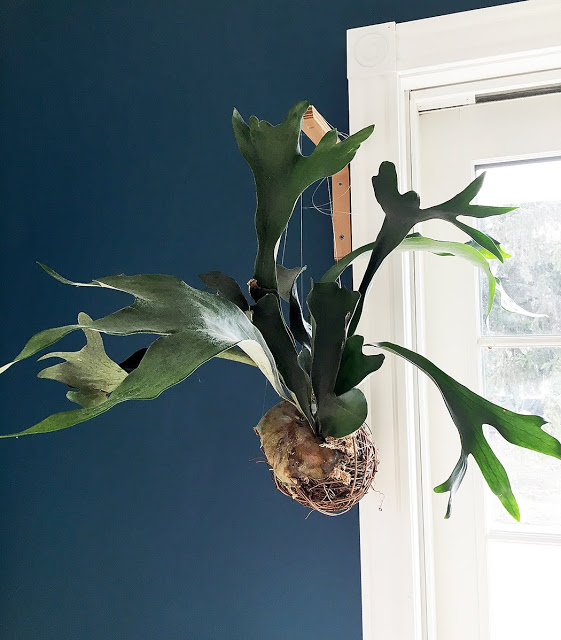 Remember how I repotted the staghorn fern in a grapevine ball a couple months ago? Because of the renovation to the back room (which has been finished for awhile but I still haven’t gotten around to putting everything back in that room and therefore having shown you what it looks like now), the fern has been living in its ball but sitting in a pot.

But last weekend I was able finally hang it up. You may recall that I followed Kylee’s tutorial on how to plant a staghorn fern in a grapevine ball. It took me awhile to find a bracket that I liked enough to use. This one came from a seller through Houzz.com. It was my first time ordering through Houzz but all went smoothly and I couldn’t find this same bracket available for sale anywhere else.
I didn’t really want the bracket tight up to the door frame, but it ended up there because I wanted it to be mounted into a stud vs. just using wall anchors. Chalk this up to counting my chickens before they hatch, but staghorn ferns can grow to be huge and maybe I might get lucky enough to need all that support that a stud offers sometime in the future. 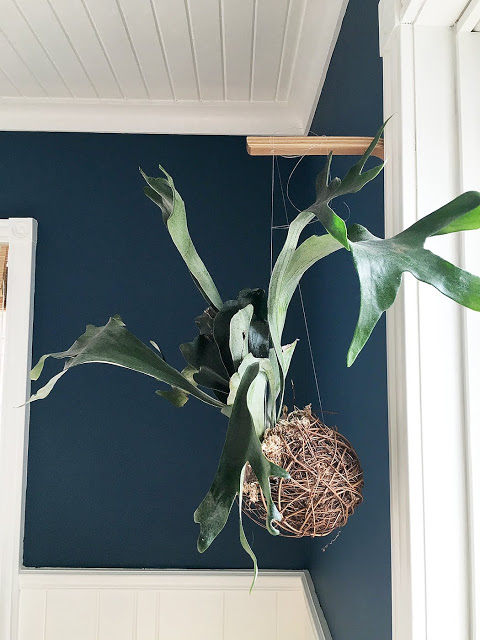 I wanted it to hang tipped forward just a little, so getting the fishing lines to be in just the right place took a little fiddling, but in the end I got it. I still haven’t cut off the excess line on top yet because I wanted to make sure I liked how it was hanging.
I love how it looks hanging and come summer I’ll move it outside to hang in a shady corner of the pergola.
By the way, the fern seems to be doing OK since the transplant. It does require a lot more watering than when it was in the plastic pot, but that’s good. You don’t ever want them sitting around in water. I just take the whole thing to the sink and squirt a bunch of water into the ball and occasionally give the fronds a bit of a mist. 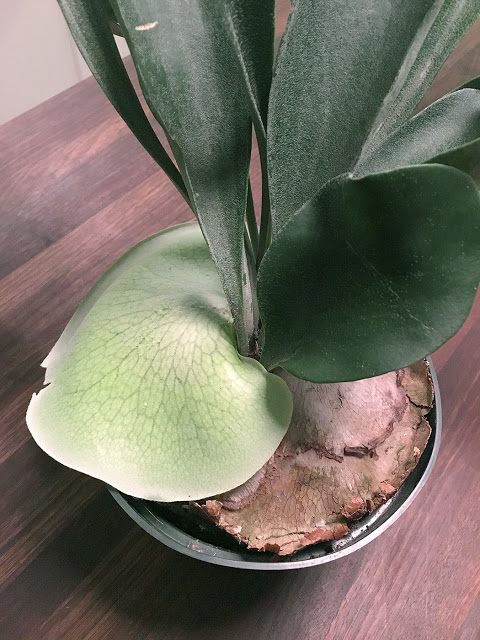 The sterile frond that was bright green when I repotted it has started turning brown (it’s OK, that’s what’s supposed to happen) and another one is growing rapidly off the back. Eventually the entire grapevine ball should be covered in brown shieldlike sterile fronds.
The staghorn is the only thing hanging in the room (maybe I’ll get back to hanging art this weekend), but it certainly makes an impact.
office staghorn fern
by Erin @ The Impatient Gardener
2 Comments
previous post: THREE PLANTS I’LL GROW THIS YEAR
next post: FRIDAY FINDS