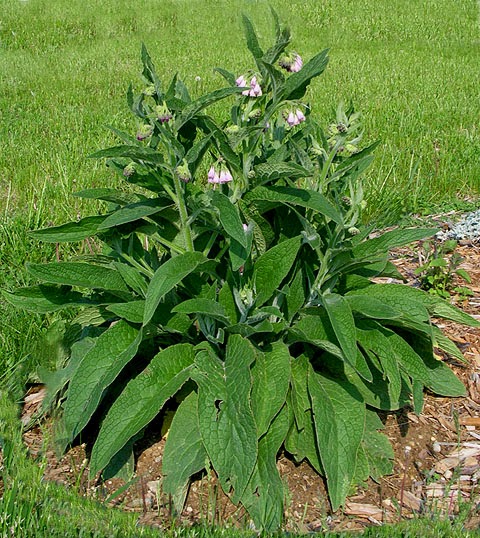 Since I wrote this post, I estimate that I’ve watched more than 50 hours of British gardening shows. And I think I’ve learned more from them than I ever learned over all the years of watching American gardening shows. Some of that information—how to take cuttings, for instance—may not be completely practical as I have nowhere to overwinter delicate new plants, but it is fascinating information to know.
But until I watched a 2011 episode of “Gardener’s World” (one Youtube poster lists it as the “Best show in the world” and I wouldn’t argue with him), I had no idea that I’ve been missing out on growing my own fertilizer all this time.
Apparently a small patch of comfrey will nourish your plants and kick your compost pile into high gear.
Until recently, my knowledge of comfrey was limited. I knew it was part of the borage family. I know that borage is a beautiful plant in an old-fashioned kind of way but also one that you never get rid of once you have it. I’ll be honest, plants like that scare me. I’ve had too many plants try to stage a bloodless coup in my garden (like these) and eradicating them is a chore that has taken years (and continues annually, in some cases).
I also knew that I liked the name of the plant: comfrey. It sounds … well … comfy. It does have fuzzy leaves, so maybe it is sort of comfy (although it can be irritating to some people’s skin so maybe don’t curl up in a patch of it).

But it turns out that comfrey is a little powerhouse of a plant. It can be used for medicinal purposes because it contains allantoin, which stimulates cell growth and repair, and as a high-protein animal feed, but that’s not why I’ve got my eye on it.

Nope, I’m interested in it because it’s a great fertilizer. Comfrey is high in potash, aka potassium (the “K” in NPK fertilizer ratios), which means it’s an excellent feed for overall plant health and particularly good for tomatoes and flowers later in the season. One source says that comfrey has more than twice as much potassium as farm manure and 30% more than compost. The NPK (nitrogen-phosporous-potassium) breakdown of comfrey leaves is 1.80-0.50-5.30 for true comfrey and that last number bumps up to 7.09 for Russian comfrey. On “Gardener’s World,” good ol’ Monty Don made comfrey tea and then watered his plants with it. He also used it as a foliar feed. And he used a big bunch of leaves as mulch for his tomatoes. Just slapped them right on there. They will feed the soil as they decompose. And anything that was left, including the stems, was thrown in the compost pile where it kick starts a pile that’s a little heavy on browns (i.e. carbon-based material). And another source claims that earthworm farms have found that adding comfrey to their worm beds increases worm numbers by 400%. Even if that’s an exaggeration, imagine what it could do for the worms in my compost bin. 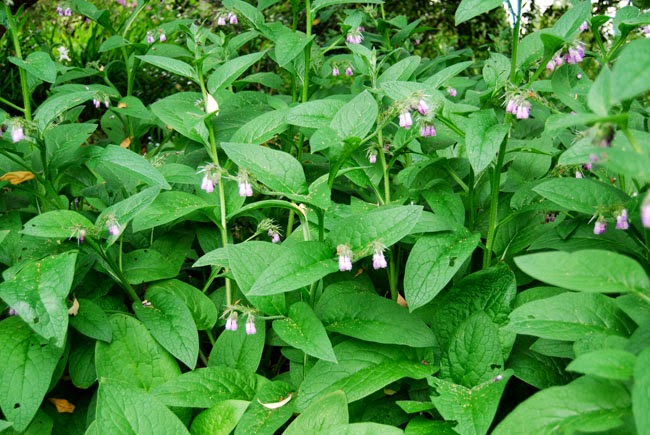 You can also put a few leaves near plants prone to slug damage. Apparently it is so tasty to slugs that they will forego eating anything else in favor of attacking the comfrey.

How have I been missing out on all this goodness? It all sounds too good to be true.
Making comfrey tea is no more complicated that putting a lot of comfrey leaves in a bucket and covering them with water (some recipes say not to add water and just let them turn into sludge on their own). And then covering the whole thing with a lid or a board and stashing it away from human interaction for several weeks (a minimum of three seems to be the general consensus) while it creates a black, disgusting stew that apparently is extremely foul-smelling (hence why you don’t want to store it on your patio while it’s brewing).
When it’s finished you strain it, dilute it with water  and pass the goodness onto your plants. The dilution rate varies, of course, depending on how strong your original batch is, but about 10 to 15 parts water to one part comfrey tea concentrate is probably a good goal.
It seems to be difficult to find plants, other than from other gardeners. I was surprised that our master gardener group doesn’t sell it at our annual heirloom plant and herb sale given that it’s such a useful plant, although I now realize that’s like because it can be fully thuggish if you grow a reseeding variety. So I ordered a few root cuttings, which it is said to grow from easily. That alone is a little scary. Any plant that grows well from root cuttings means that you better put it in a place that you like from the beginning because digging it out will be difficult. Unless you dig up all the roots, you’ll have more plants in that spot.

I ordered Russian comfrey (Symphytum x uplandicum), a variety called Bocking 14, which is said to be sterile, so at least I don’t have to worry about it reseeding all over the place,  although cutting off the flowers before they set seed would also work (this is so much easier said than done). Apparently it is best to use it before it flowers, or right as it starts flowering. This strain is not great for animal feed—apparently it is more bitter than other strains—so I’m hoping that it won’t be tasty to deer.

I’m going to find a little patch that’s out of the way. I’m still worried about it getting aggressive, but I think if I can provide it a nice little spot away from the main garden areas, I can let it be true to its nature.

Growing my own fertilizer: what could be better? I’m becoming a more self-reliant gardener, recycling in my own yard and saving money in the process.