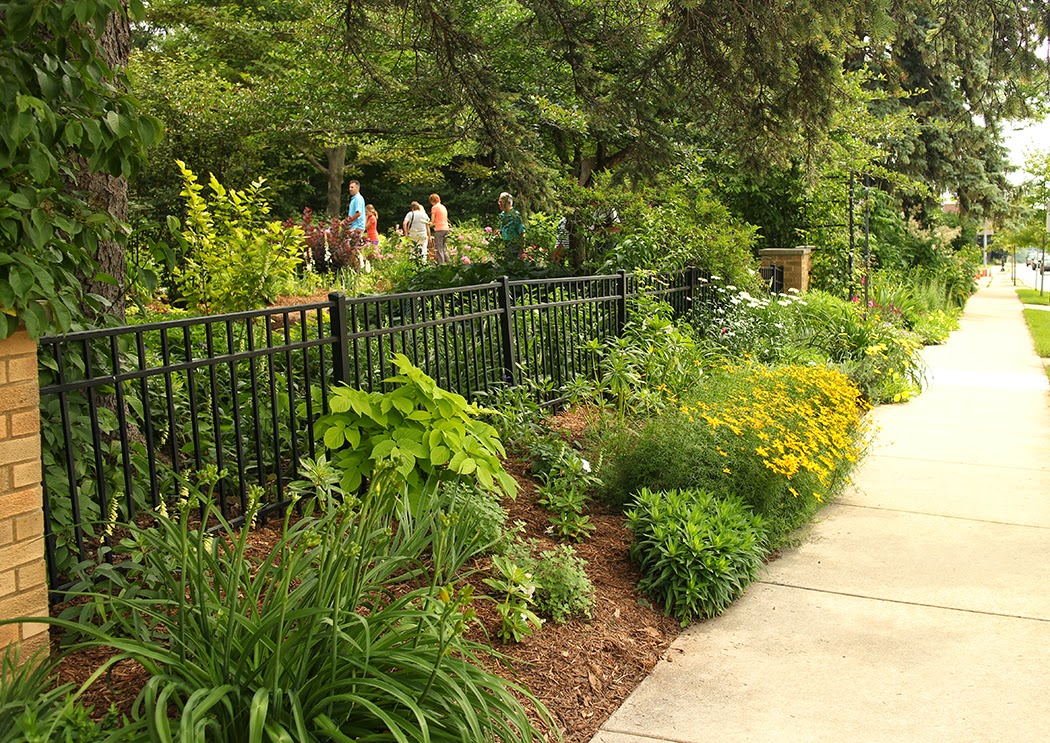 Garden tours are such a great way to give your own garden a dose of inspiration. A lot of times I poo-poo going on them because I’m busy, or it’s hot, or it’s buggy, or it’s rainy or I’ve seen the gardens on the tour before, but a couple Saturdays ago I was reminded of how important it is to get out of your own gardens to be in others.

My mom and I wandered around our city’s garden tour for a couple hours in the morning. Although there were five gardens on the tour, there was only one that really blew me away. It’s not that the other gardens weren’t nice because they were and I give huge credit to anyone who is willing to open up their garden to the public for viewing because I can only imagine how scary and how much work that is. It’s just that we started at the garden we knew would be great (we’ve been there before and the homeowners are probably among the most active and best gardeners in the area) and well, nothing else really compared after that.

This couple gardens on a large city lot that is home to one of the city’s oldest and most well-known houses. I was last there seven years ago and it’s amazing how they’ve expanded the garden since then. Every part of it was stunning.

It sits along one of the busiest streets in the city, but they do a great job of making the entrance inviting while screening some of the noise and views of the street.

When you walk in, much of the front yard is shaded by mature trees. The gardeners here do a lovely job of underplanting, but interestingly they leave more space between plants than I often do. It’s different than what I usually go for, but I quite like it.

To the right of the entrance is a lovely garden full of lavender, which is notoriously difficult to grow here. Fortunately the gardener here also writes the weekly gardening column in the local newspaper and this spring she wrote that she plants her lavender entirely in bark mulch (no soil). I’m doing the same thing with the ‘Phenomenal’ lavender plants I ordered this year. I hope I have as much success with mine as she does with hers.

There are several small ponds on the property. I think I counted at least four of them. I’m not big on water features, but these were all lovely additions to the garden.

I loved the ferns that lined the large pond. The homeowners said they had no idea what kind they were and suspected that some spores came in on the back of a passing duck. I think I love the story even more than the ferns. They said I was welcome to have some as they were pulling them out by the handful, but anytime a gardeners is that willing to give a plant away, I tend to get a little wary.

I took this next photo just to show what attention to detail was paid around the garden. The clematis flower floating in the bird bath was a charming touch for the tour.

These gardeners are not afraid of containers. They sprinkle plants in containers throughout the garden including several large trees including this lovely Japanese maple.

On the large sunny patio, they grow dozens of fruits and vegetables. Everything in containers is moved into the garage during winter and I have to think they have machinery to move the giant pots.

Some fruits, like this giant espalier tree (unfortunately I don’t know what kind it is), are grown in the grown. If you look closely you can see baggies on the tree. Here’s why.

As you walk around to the west side of the house, which is very shady thanks to several mature spruces on the lot line, it’s impossible not to be impressed by the enormous climbing hydrangea that covers the entire side of the house. This is one plant. The homeowners were quick to warn guests that it is trying hard to rip the brick off the house, so be wary when planting one of these against your house.

Then you turn to see a gorgeous Cornus ‘Golden Shadows’. I’ve been trying to grow one of these for four years and mine is still three feet tall so I have no idea how theirs is so tall and lovely, but seeing this one is enough to make me persist in attempting  to grow one.

Since we stopped back at my mom’s house, I thought I’d snag a few pictures since, in my opinion, her garden deserves to be on a tour.

You can see that my mom subscribes to the “jam it full” philosophy of gardening. I think this area is just stunning, with all its shades of green punctuated by the neons raised baskets of impatients.

She has a climbing hydrangea that is not quite as impressive as the one on the tour house, but pretty stunning nonetheless.

This bed is just two years old and already looks so lovely.

At the front entrance of their mid-century modern house, things are a bit more formal. I like the look.

There is so much to be gained by getting into another garden. You never know where inspiration will come from. Plus, sometimes you just have to put down the trowel and enjoy the beauty of the garden.

boxwood climbing hydrangea garden tour
by Erin @ The Impatient Gardener
4 Comments
previous post: BACK TO MACKINAC
next post: BATTLING THE DESTROYERS OF (MY) UNIVERSE